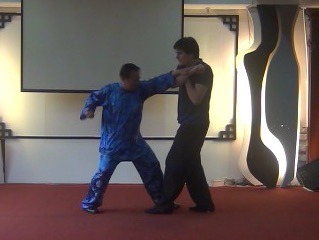 The techniques in San Zhan are sufficient to handle any attack

My wife and I are happily married and we have one son. We are blessed with many gifts since we started practicing chi kung from you. Our health and happiness have improved remarkably.

However, there is something that my wife seems to struggle to overcome. A blockage that prevents her from enjoying a 100% all these great gifts life has given us. She is a highly educated person with several degrees. She is smart and capable. However, currently she cannot work as she does not have work authorization in USA.

So she feels useless and ashamed because she thinks she is wasting her time at home. She is a great mom. She takes care of our son, who is a really happy baby.

I am starting to wonder if I should do something besides just letting things be. I try to be a good husband, I love my wife and my son, and I work hard to give them happiness. I take care of my son when I am home and I try to support my wife in everything I can. I truly try to be happy and make people around me happier. I reach out to you Sifu, to see if you can recommend to me how to tackle this situation. I am willing to do anything it takes. I do not seek money or social status, so I am willing to sacrifice those if my wife would be happier.

Your problem is simple, and can be overcome quite readily. It is also a problem faced by many high-earning husbands.

It is actually not true that your wife is not working! Being a housewife and now a mother is a very demanding job. It is also a job loved by many women -- if their husbands earn enough so that they can enjoy the luxury of not working outside.

It is also a most noble job. What other jobs can a woman do better than making her husband and children happy?

You have to subtly convey this message to her. If it helps, you can mention that I share this philosophy.

Nevertheless, if your wife wants to work, she can also do so. She doesn't need to work for a company. She can be her own boss. Initially she can work at home, and when her business brings in more profit, both of you can rent an office. As your wife is well qualified, there are many things she can do. She may, for example, base her business on her computer. Or she may start a class teaching wives how to make their husbands happy.

Regarding my training I feel very blessed and happy. My ability to deal with intellectualization has improved and my chi flow is now smooth.

As always, I would like to thank you for all that you have done for me and my family. My parents told me that they had a great time in Spain with you. They have never been better. They feel young and alive! We owe you so much happiness

Our chi kung is indeed wonderful. Just only about 10 minutes of daily practice, which we enjoy tremendously, and it gives us good health, vitality and longevity, irrespective of our age! 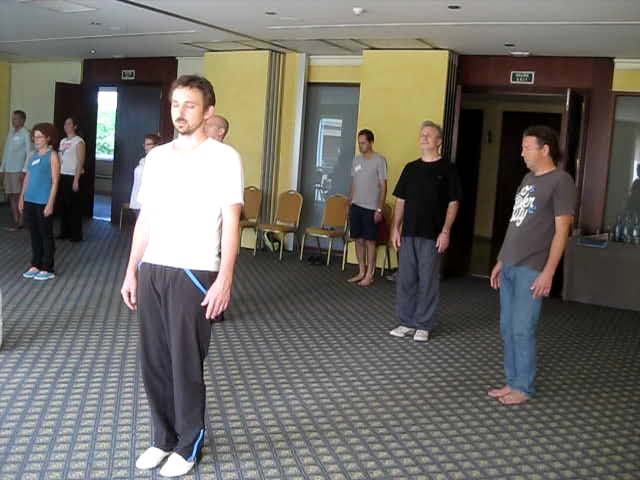 Can you cough or scratch yourself when you practice chi kung?

While browsing the web, I have found a description of the history of Wu Zu Quan. It might be useful to have your point of view on its accuracy.

The description of the history of Wuzuquan is correct.

There are, however, three points of difference.

One, saying that inventors of derivative Shaolin styles were reluctant to have their names mentioned for fear of prosecution is applicable only in the Qing Dynasty when many Shaolin masters were revolutionaries. At other times, this statement is not applicable. For example, Bai Yi Feng is known to be the inventor of Wuzuquan, Wang Lang of Praying Mantis Kungfu, and Yue Fe of Xingyiquan.

Even during the Qing Dynasty, we know of the names of the inventors, like Hoong Hei Koon of Hoong Ka Kungfu (though he did not actually invent it), Yim Wing Choon of Wing Choon Kungfu, Chan Harng of Choy-Li-Fatt Kungfu, Lau Sam Nyan of Lau Ka Kungfu, and Mok Cheng Kiew of Mok Ka Kungfu.

Two, It was not due to the fear that kungfu at the Shaolin Temple would diminish in importance that Bai Yi Feng invited Shaolin masters back to the Temple to demonstrate their arts. It was the opposite reason. Shaolin Kungfu had expanded to such an extent that Bai Yi Feng feared it might lose its original characteristics.

During my practice I get an overwhelming need to do some things like cough or scratch an itch.

I am under the impression that during a chi kung session's chi flow and meditating part one must remain completely still except for the movement chi does for you.

Is this correct? Or are bodily functions like coughing and burping allowed during ones practice?

Sometimes you may think that an insect is crawling on your skin, but when you examine you will find no insect there. It is due to chi flowing at your skin level.

You are right in your impression that during chi kung and meditation training, you should not let irrelevant events distract you, like someone opening a door or a telephone ringing, except events due to your chi flow like what is described above.

However, if an event is urgent, even when it is unrelated to your training, you should stop your training and attend to the event. If a cupboard is falling onto you, for example, you should move away immediately. You can have a chi flow later on to harmonize the disturbed chi flow as a result of your sudden movement. 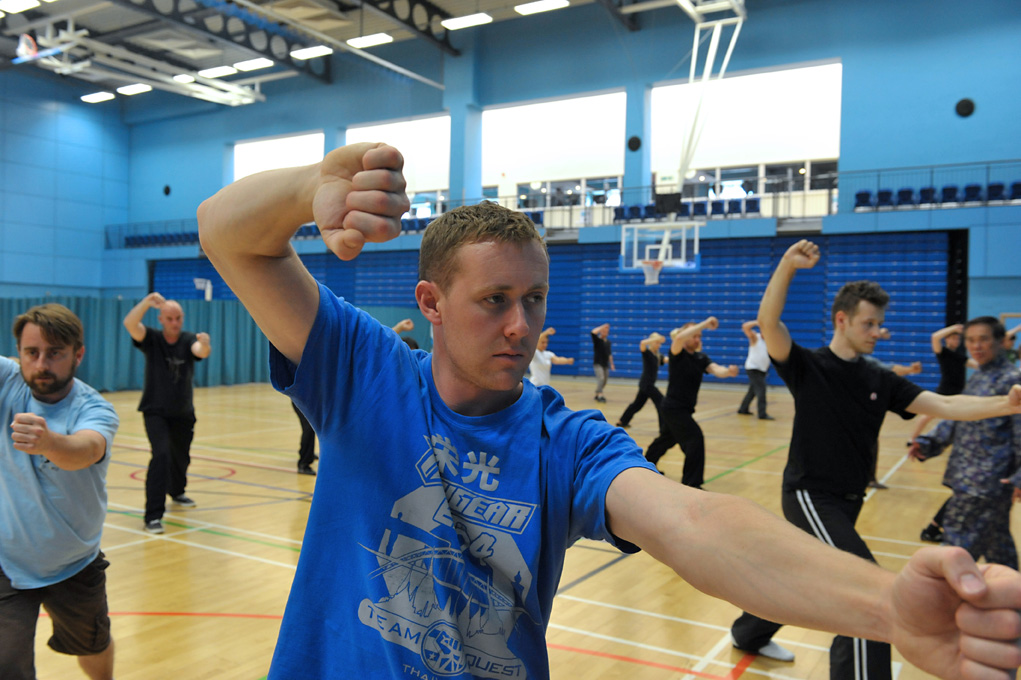 My combat sequence practice is going very well and I have had a number of exciting breakthroughs. I based my combat sequence on the hawk sequence from Xingyi. I also made another sequence mainly from the Praying Mantis that you taught me in Switzerland,

I am glad your sequence practice is going on very well. Now just apply the sequence on your opponents in free sparring.

Actually, overcoming the problem of free sparring with other martial artists is dimple. Don't make things difficult, which you and many people are in the habit of doing.

These other problems, irrespective of whether they may be related or unrelated, may or may not be important, but they are not the problem in question. The problem in question is to fly to Cock, not whether you should fly Aire Lingus or Air Europe, or whether you should fly to Cork at all. Other problems should be settled, otherwise settle them first. For example, as you are about to buy an air ticket, the problem of flying with Aire Lingus or Air Europe occurs, settle it immediately and stick to it.

In principle, it is the same as overcoming the problem of free sparring with other martial artists. You can learn all these principles and how to apply them in my Zen course whenever I offer one. You will also understand why in a Zen course in Ireland I could come up with a viable solution to a difficult problem suggested by a student after I had walked just seven steps.

I have developed plans of how to find sparring partners too, and I feel much more confident about doing that than I did 3 weeks ago. In fact this is the most confident I have felt combat wise in years.

Put your thoughts into action. In simple language, just do it. The main problem facing many people is that they only have thoughts, but no action.

Your action may not be the best action, but it is certainly better than no action. Suppose you have a plan of asking everyone you meet on a street, including strangers, whether he or she would like to have some free sparring with you. This isn't a good plan, most probably not as good as the one you have thought out. But it is certainly better than merely thinking of what to do. 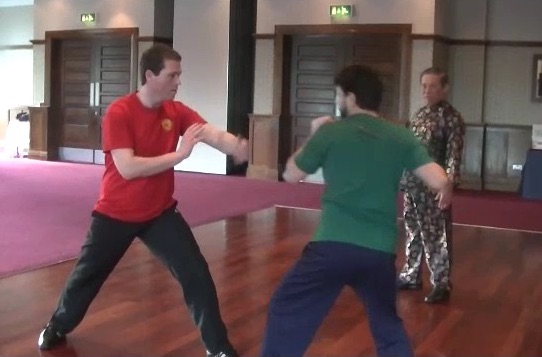 First class kungfu is capable of combat, contributes to good health, and cultivates the spirit

Reading back through your replies to me, you said one of the best things I could do was to get a good girlfriend. I have a girlfriend now! I have been seeing her for a long time, and she makes me very happy.

Wonderful. Your task now is to make her very happy.

My Taiji master has said that good kungfu and chi kung are concerned not just with combat, but also with health, and morality. He said that morality was most important. Whilst someone might die from combat, or from ill health, to suffer bad karma from bad morality could be even worse.

As I have the dream to be a kungfu master one day, and therefore may teach students, I think it is vital that I can first of all be an example morally, and second of all be able to advise them morally.

Your Taiji master is correct, and I agree with him. In any good kungfu training, I would place morality, good health and combat efficiency in that order of importance.

Following this definition, most kungfu styles today, including Taijiquan, are not martial arts because their practitioners cannot use their kungfu for combat.

Hence, my advice is that when you become a kungfu master one day, you must teach first class kungfu, not just any kungfu.

Second class kungfu is capable for combat, and also contributes to good health, but may not contribute to morality and spirituality.

In other words, just by practicing the kungfu taught by you, and without doing anything extra, your students will be able to use it for combat, have good health, and have high moral values and high spiritual attainment irrespective of their religion.

Editorial Note: Paul's questions will be continued at the October 2016 Part 2 issue of the Question-Answer Series.