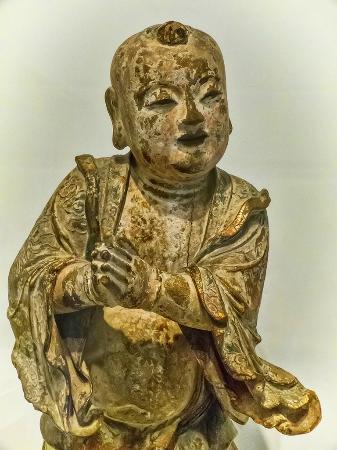 This photo of Seattle Asian Art Museum is courtesy of TripAdvisor, and is taken from http://www.tripadvisor.com/LocationPhotoDirectLink-g60878-d142682-i142996962-Seattle_Asian_Art_Museum-Seattle_Washington.html

Sigung, in your young days you sparred with many martial artists and also had a few real fights, and you remained undefeated. Can you please tell us the secrets of your combat efficiency?

Although I am more than 70 now, I still consider myself young, thanks to my daily practice of kungfu and chi kung. Hence, I permit myself some liberty to use the expression "in my younger days", as suggested by Douglas, my most senior disciple in Europe, instead of "in my young days".

To understand the secrets better, we may divide the period of my sparring into three stages.

As a result of this procedure, my combat efficiency improved tremendously. I also improved on the techniques I would use in my counters, especially after learning from my sifu, Sifu Ho Fatt Nam. Hence, at the second stage, the secret was my superior techniques. When opponents attacked me, I could counter with techniques that they had no defence.

This improvement led to my third stage where I developed high-level combat skills. I often knew beforehand what attacks my opponents would use, or how they would defend if I attacked them. My movements were so fast and forceful that they were caught unaware, or were forced to retreat helplessly.

Yet, the best benefits of my combat training were not to remain undefeated in all these sparring sessions but good health, vitality and longevity, and to be able to jump and roll about at an age most other people would be contented if they could walk briskly.

"Hungry Tiger Catches Goat" is a very important technique in Southern Shaolin, often called Hoong Ka Kungfu. This pattern is a manifestation of the famous double tiger claws. In the hands of a master, it can be used to counter any attack! We shall take an example each from the four categories of attack -- striking, kicking, felling and chin-na.

As an opponent executes a thrust punch at you, sink back your body, without moving your feet, to avoid the full force of the punch, simultaneously brushing it off with one tiger-claw and counter-attack with the other tiger-claw.

If an opponent executes a side-kick at you, sink back your body, without moving your feet, to avoid the full force of the kick, simultaneously brush it off with one tiger-claw, move your back leg forward and tame the opponent's hands with the other tiger-claw, and use the previous tiger-claw (with which you brushed of his kick) to counter attack the opponent, all in one smooth movement.

If an opponent attempts to fell you, move one leg out of his leverage advantage, adjust your foot positions for a slanting Bow-Arrow Stance, tame his two hands with one tiger-claw, and attack him with the other tiger-claw.

When an opponent grips your arm with his one or both hands, circulate your arm to release the grip, tame his two hands with one tiger-claw, and attack him with the other tiger-claw.

A tiger-claw attack is not merely scratching an opponent to make some external marks, as it is sometimes shown in kungfu movies which may look impressive to the uninitiated but is not damaging.

There are three main methods of a tiger-claw attack. It may be used as a strike, which can cause much damage. It can rip off an opponent's skin, like from his skull, or rib off his limb, like from his shoulder. It can grip his vital points, like in chin-na. 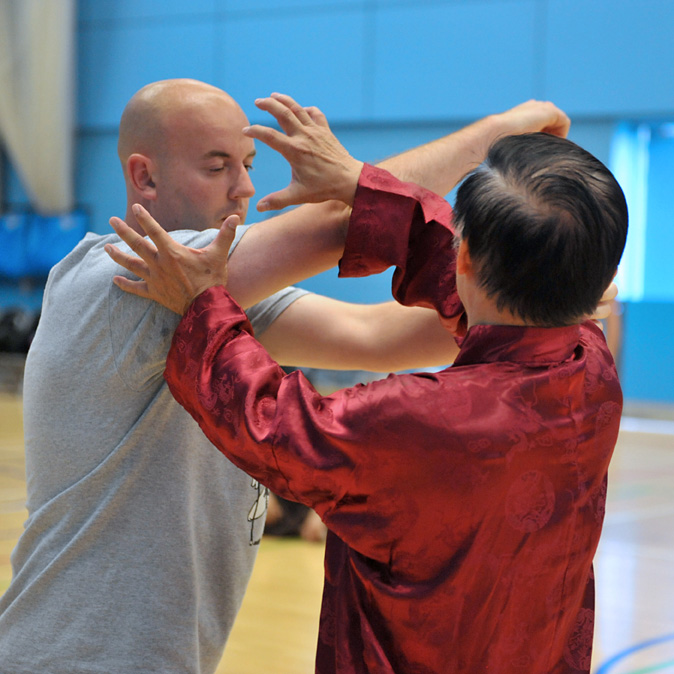 Grandmaster Wong has the opponent in full control

How does a Taijiquan practitioner merge with the Tao?

There are two main ways.

One way is to let his mind direct his chi flow to move his form. Then he merges his mind with his chi. Eventually his personal chi flow merges with the Universal Chi.

Another way is though meditation, which may be performed standing or seated in a lotus position after his Taijiquan performance. He places his mind at his dan tian, and let his energy at the dan tian expand to merge with the Tao.

I read on your webpage that Sigung Ho was a master of the mind and that in the end he could have become enlightened easily but you think that he chose to go back to help Guan Yin. So what did he do to willingly not be enlightened? Can you ask him somehow? If not, is there a way I can ask him?

My sifu, Sifu Ho Fatt Nam, willingly chose not to be perfectly enlightened by desiring to help Bodhisattva Guan Yin.

I can ask him, but I won't because it would be insulting. It is like when you are sick and you see a doctor and he asks you to take some medicine, and you ask him, "Doctor, must I take the medicine?"

As you address me as "Sigung", my sifu will be your "Sitaigung". You can ask him, if you want to be insulting. Go into deep meditation, and ask him.


Editorial Note: Franz' other questions can be found at the March 2017 Part 2 and February 2017 Part 3 issues of the Question-Answer Series. 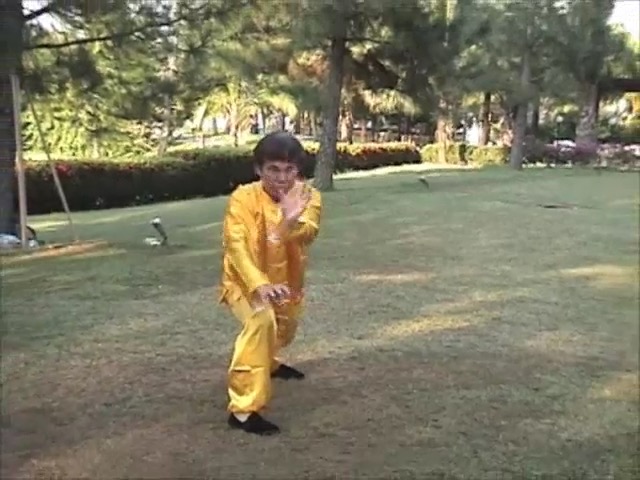 The teacher monk has said that when the mind is very focussed it produces thought thus creating imaginary worlds where you could meet Buddha, experience other places, etc. In 90% of the cases these worlds are not real and one should come back to the here and now.

There are two dimensions -- the perfectly enlightened dimension and the phenomenal dimension.

In the perfectly enlightened dimension, everything else, not just 90%, is not real. The Buddha you meet, the heavenly places you experience, or the ground you stand on when you come back to this world, and you yourself, are not real. The only thing real is the Great Void, called variously by people of different culture as God the Holy Spirit, the Spiritual Body of the Buddha, Tao, Original Face, or the collapse of particles into undifferentiated spread of energy.

In the phenomenal dimension, everything you see, touch and feel is real. You yourself, your body, your thoughts, your blockage, your worries, your computer and all other things you see, are real.

Your problem, like the problem of most people, is confusing the perfectly enlightened dimension with the phenomenal dimension.

Chi is everywhere -- in both the phenomenal dimension as well as the perfectly enlightened dimension. 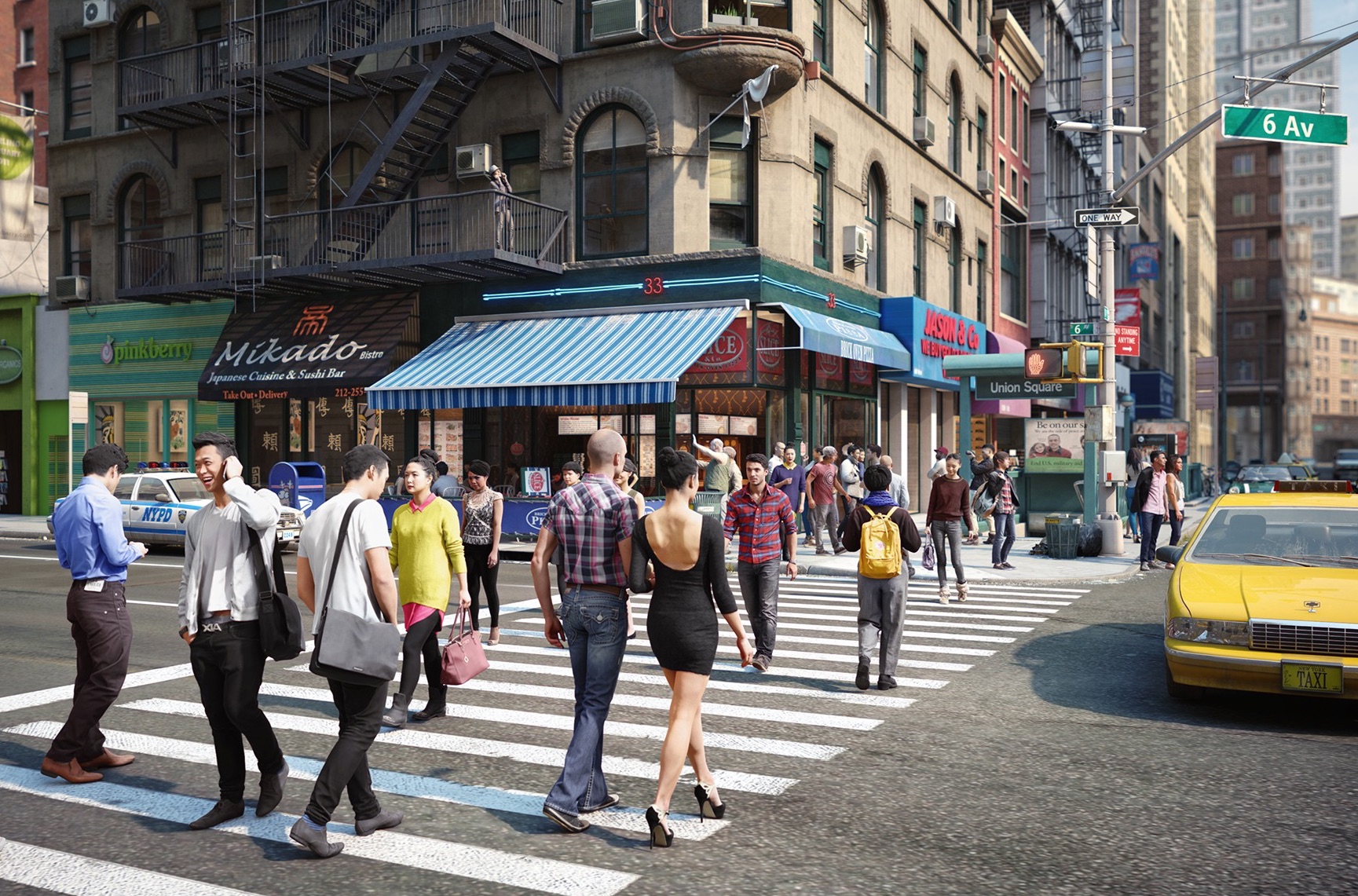 Everything we see is our own self-created world. Basically everything is energy.

Before entering into meditation I always pray or visualise that this sitting should bring the best benefit for me. I try to apply "mind creates reality".

"Mind creates reality" can be interpreted in numerous ways. In your experience, you interpreted it as separating your mind from your body. You succeeded, much to your discomfort.

You should apply "mind creates reality" to overcome your blockage and attain good health.

At one sitting I was shocked, because these thoughts wanted me to sit through the whole night. I could still hear the voices around me and feel my body, but at some point the voices were far away. My mind was ripped out of my body, It was strangely unpleasant. I tried to move my body, but couldn't. Apart from that I could not grasp the body at all.

Suddenly fear and panic came up. I managed to breath deeply for three times to bring the mind back to the body. But it was shaking and was pulled away again. It took all my will power to keep it there and use it to stand up to break the meditation.

After 30 minutes my body started moving slightly. I let it do it and it produced fluent Kung Fu until my consciousness wanted to influence and understand the movements.

What was this experience? Was I in one of the self created worlds?