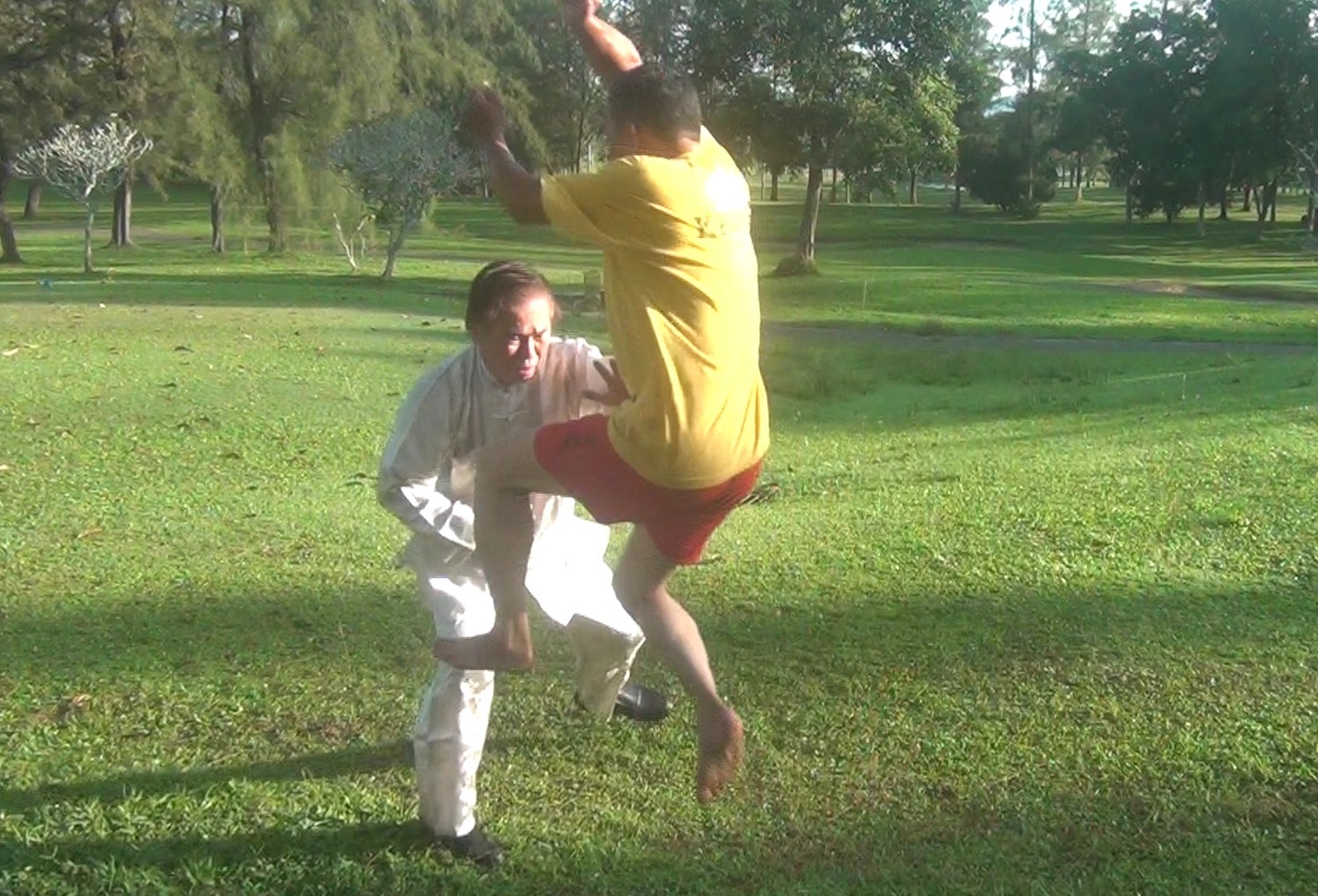 If your kungfu cannot be used for combat, it cannot be called kungfu

Attending an Intensive Chi Kung Course is the best chance for Albert's employee to survive his cancer. Not only he will overcome from cancer, he will also find life more meaningful.

Alternatively he can take a three-month course or even a one-month course offered by the Holistic Health Cultivation Centre. But the chance is much less. It is his choice. It is actually a choice between life and convenience.

As healers, having the heart of parents for patients, we tell patients the choices available. We must also have the sincerity and courage to do so. But we leave it to patients to make their own choice. It is their lives.

It is not advisable for you to do the healing. Even when you do your best to save him, the situation is such that it may not be feasible.

You must charge the patient, or Albert, a very high fee. I don't know how much the Centre will charge, but I believe it would be around US$ 30,000 for a year, which is actually not much for Albert, or for anybody who would otherwise die of cancer.

How do I know the kungfu I practice is genuine?

An excellent way is to find out your result according to the benefits training kungfu should give.

If yours is good kungfu, you can decide whether it is great kungfu. Great kungfu can be used for combat, contributes to good health, and promotes spiritual cultivation. Great kungfu, of course, is very rare today. If you find a master who teaches great kungfu, treasure him dearly. 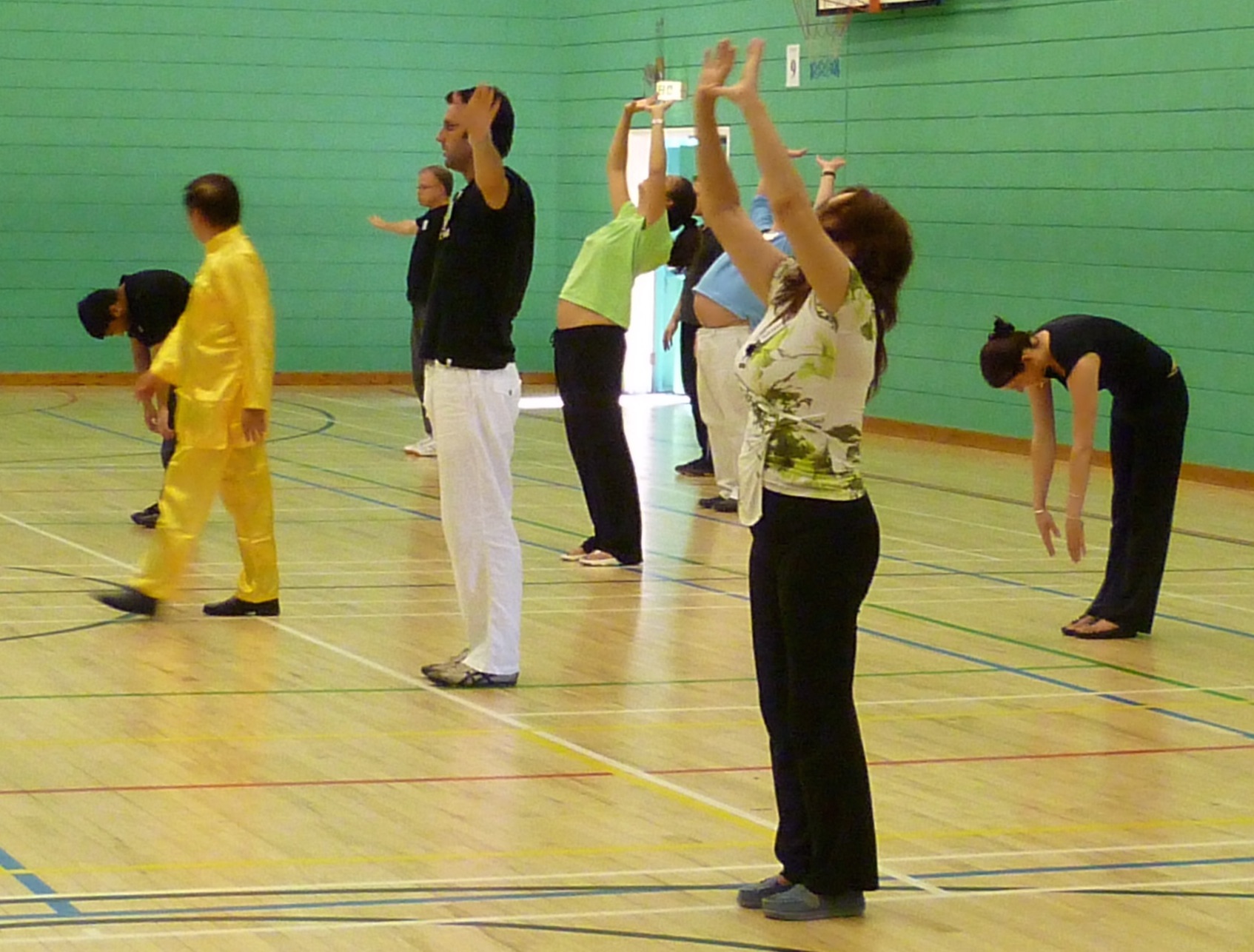 Using"Carrying the Moon" to generate a Cosmic Shower

During the Cosmic Shower course, did we get more shower while performing "Carrying the Moon" or while having a chi flow?

You should not worry about such trifle questions. This is a big problem with people in Western societies. They intellectualize unnecessarily, and make themselves stressful.

Does it matter to you whether you got more shower while performing "Carrying the Moon" or while having a chi flow? What is important is that you benefit from the exercise.

I don't know whether you got more shower during the exercise or during your chi flow. I didn't observe you. If I had observed you, I would have an answer. But it did not matter. What mattered was that you benefited from the exercise.

As an analogy, what you do, or your job, is a technique to generate a cash flow. How you spend your money wisely is the time you enjoy your cash flow.

Traditionally at the end of the downward movement I would have let my fingers drop, palms facing backwards before starting the upwards movement. When my hands reached the top of the movement they would have turned but with less grace or purpose then what I observed from you.

Although the difference appears subtle it struck me as something new that I had not practised before. I believe that it is more than just a subtle difference and it in fact has a big effect on the overall flow of the movement and the energy that the movement generates. My traditional movement seemed to be a broken movement of two parts whereas this was one complete flowing movement.

Congratulations for your sharp observation. I myself did not realize the details of the movement. It came about spontaneously through years of practice.

Your description is accurate. "Lifting Sun and Moon" should be performed in one smooth flow without any break in between so that a lot of energy can be generated.

However, you need not be too concerned with the exact movement, otherwise it will not only distract you from enjoying your training but also make you stressful, thus bringing adverse effects. If your movement seemed to be borken in two parts, that is alright. We are extremely cost-effect. If a real master performing "Lifting Sun and Moon" can develop internal force in one year, our students who attended the course can do so in a month, i.e. working at 100%. If you work at 30%, you can attain in three months what a real master would take one year.

Real masters are very rare today. Out of a hundred practitioners, may be one or two may become real masters. More that 90% of practitioners do not develop any internal force from "Lifting Sun and Moon", which is actually found at the beginning of virtually all Shaolin kungfu sets. Most of them do not even know that "Carrying Sun snd Moon" can develop internal force. They perform it because it is part of the set. 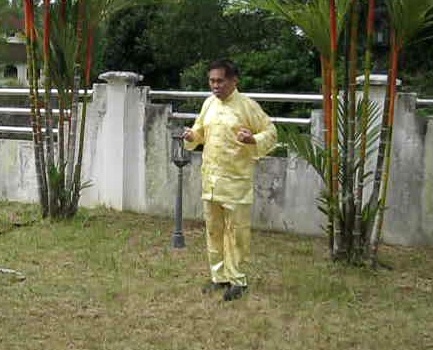 I would like to ask you if we are moving two spheres, or pearls of energy in our palms, when performing the pattern "Lifting Sun and Moon". Is this where the pattern gets its name, one pearl is the sun and the other pearl is the moon?

You should not be worried about whether you are moving two spheres or pearls of energy when performing "Lifting Sun and Moon". You should also not be worried about how the pattern got its name. This is a main reason why you are not as happy as you should be. You worry and intellectualize too much. It is not without good reasons that our three golden rules of practice are "not to worry, not to intellectualize, and to enjoy the practice".

I don't know how the pattern got its name, but I believe it is like what you said.

What you described was what we did at the course. Not only it is the correct way to perform "Lifting Sun and Moon", we were extremely cost-effective. That was why you and other course participants felt a lot of energy at the dan tian and at the fists. Most other practitioners do not have the energy.

You had the experience because it was a purpose of the pattern. Most other practitioners would not know the purpose. Even if they knew the purpose, they would not realize the purpose. We sound boastful, but it is the truth.

Generally the chief purpose is to focus chi at the dan tian. That is why this pattern, not the preceding pattern of "Lifting Sun and Moon", is called "Focusing Chi at the Dan Tian".

The main reason why you should not worry unnecessarily on such questions is because we already have a lot of benefits doing the exercise. We must guard against over-training.

The other question is whether your experience of having these pearls was due to your intention or due to the exercise. It could one or the other, or both. In your case, it was likely to be both, where you had the intention and it was also the purpose of this pattern. 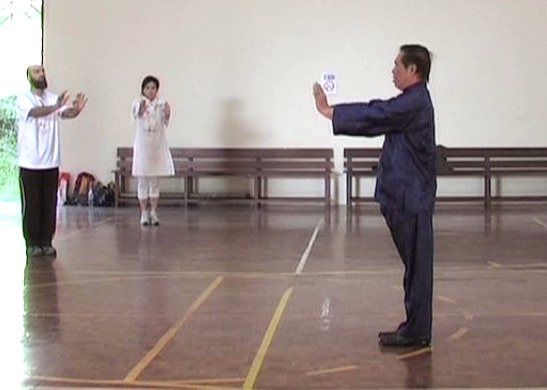 You felt a pearl of energy at your palms when performing "Pushing Mountain", "Carrying Mountains" and "Big Windmill" because you performed the exercises correctly and effectively. It is not wrong to have this idea before, during or after the exercises.

Having the idea, which means understanding the purpose of the exercises, will contribute to cost-effectiveness. Over-concerned with the idea, like what you are doing, may bring adverse effects.

Finally I would like to ask what is the significance of the pearls of energy at the hands of dragons when they are depicted in Chinese imagery? Is it in someway related to the practice of patterns like "Lifting Sun and Moon" or our Kung Fu practice in general?

The pearl symbolizes the elixir of vital energy, i.e. vital energy that has coalased into a pearl. Yes, it is related to patterns like "Lifting Sun and Moon", and to our general kungfu practice.

That is the reason why although I am more than 70 years old now, I can do better than many people who are younger than myself. But we must guard against having more energy that our body can take.