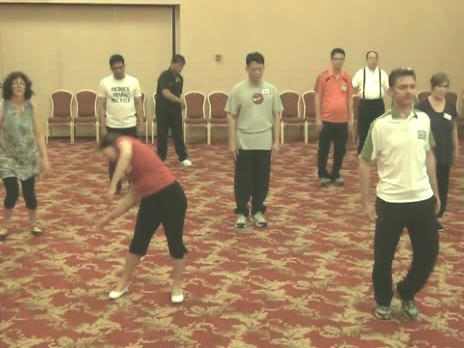 It is chi flow, not the techniques, that gives chi kung benefits

Sifu, you mentioned that our typical student in Shaolin Wahnam could attain in one month what a master would take one year. Why are our students so fast in their attainment?

Although this is true, many people may not believe it. Let us take an example each from chi kung and from kungfu, the two arts taught in our school, Shaolin Wahnam.

What is so great about chi flow? It is chi flow, not the techniques, that gives chi kung benefits like good health, vitality, longevity, peak performance and spiritual joys. If a practitioner does not have chi flow, no matter how long he has practiced, he will not get any of the chi kung beneifts.

Most practitioners do not differentiate between techniques and skills. They believe, wrongly, that if they have the right techniques, they will develop internal force and be combat efficient if they practice consistently for some time, like a few years. The kungfu techniques of other students are correct, but most of them have no internal force and cannot apply their kungfu for combat, because they do not have the required skills.

We understand the philosophy and have the right methods of internal force training and combat application. More importantly, we transmit the necessary skills to our students from heart to heart, so that they can start their internal force training and combat application immediately, without the need to first acquire the skills. Their subsequent training is to improve their skills, instead of first acquiring them.

Can you please tell us more about heart-to-heart transmission?

Many people are puzzled by heart-to-heart transmission. The highest Shaolin arts, for example, are transmitted from masters to students. It is the transmission of skills from the heart of a master to the heart of a student. It is not just instructions, or even teaching.

There are three levels of heart-to-heart transmission, namely physical, energy and mind.

At the physical level, a master ensures that his teachings are followed by students. He does not merely give instructions, but makes sure that his students follow them. For example, in a chi kung class, when I ask students to relax, I make sure they are relaxed. If any student is not relaxed, I shall go over to him and give him appropriate advice. In a kungfu class, if a student fails to follow my teaching when I tell students to lean on and not block an attack, I may demonstrate to him or physically move his arm to show him.

At the mind level, the master uses his mind to activate the necessary skills in his students. I sometimes used this method on women in chi kung healing sessions. Instead of using my fingers to open energy points on sensitive spots of women, I used my mind to do so. In a kungfu class, if a student fails to explode force, I may use my mind to help him. 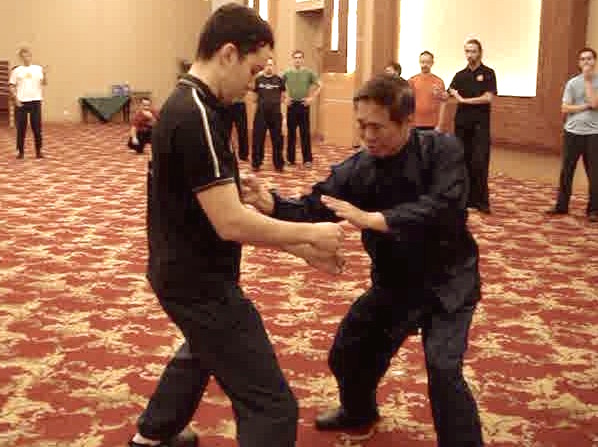 Suppose you could ask each of your four sifus a question each. What four question you would ask?

Except for my first sifu whom I believe I was led to by divine guidance, I spent time to search for all my sifus, who were all the best in their arts.

My first sifu was Sifu Lai Chin Wah, more widely known as Uncle Righteousness. My second sifu was Sifu Chee Kim Thong, known as a living treasure of the Peoples' Republic of China.

My third sifu was Sifu Ho Fatt Nam, the third-generation-successor from the Shaolin Monastery at Quanzhou in Fujian Province of South China. My fourth sifu was Sifu Choe Hoong Choy, the patriarch of Choe Family Wing Choon Kungfu.

Uncle Righteousness was famous for his combat efficiency, and was well known to be righteous at a time when the fist instead of law ruled the day. I would ask him, "Sifu, how could I be efficient in combat?"

Besides being very combat efficient and an expert in tramatology, or kungfu medicine, my third sifu, Sifu Ho Fatt Nam, was a spiritualist. I am proud and happy to have lived up to his teaching of always having a crystal clear consciousness. I would ask him to teach me about spirituality.

I know about our philosophy that left-handers will benefit a lot from the dominant right-handed practice in our sets. But what about single-handed weapon training? Should the left-handers still use their weaker hand or should we mirror the sets?

The philosophy that left-handed practitioners will benefit a lot from the dominant right-handed practice in our sets, applies to unarmed sets. Your question about single-handed weapon starts me thinking.

I believe that it is better for practitioners to use their better hand to hold the single weapon. Hence, left-handers should hold their weapons with their left hands. You should mirror the sets. 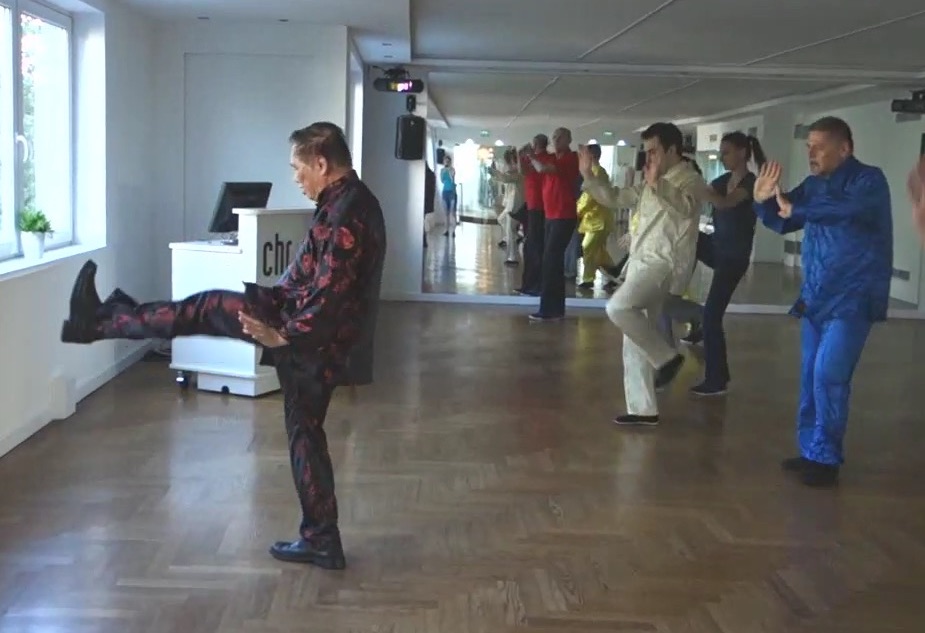 A tyoical kick from Shaolin Wahnam

Two of my good friends approached me independently and asked me to teach them kungfu. I took the opportunity to practice my own teaching skills. These two persons were already skilled at training the form of some kung fu styles.

I drafted a lesson plan for different sections, each lesson being between 2 and 2.5 hours long, with each lesson covering a different aspect of fundamentals. I taught each one individually to avoid the issue of ego arising between the two.

Teaching your two friends individually is a good start to train and develop your teaching skills. Later, you should teach a class, instead of teaching individually.

Students in your class should develop good kungfu culture, which includes overcoming their personal ego, and helping one another to progress. If any student is unable or unwilling to accept the kungfu culture you teach, you should ask him to leave. He is undeserving to be your student. We do not just teach kungfu; we teach students to enrich their lives and the lives of others.


Editorial Note: Frederick's other questions can be found at September 2018 Part 2 issue of the Question-Answer Series.

Fundamentals: how to enter a qigong state of mind, the salient points of stances and developing internal force from zhan zhuang, basic footwork, body mechanics.

Kicking: utilizing and defending against kicks.

You have over-taught, which is a common mistake of many new instructors. Give your two students some time to acquire these skills, not just learn the techniques. Most martial artists, including masters, may not differentiate between skills and techniques, but we do. 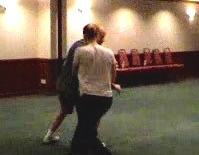 "Turning-body" to neutralize a felling attack

A principle that came to mind while I was teaching was "to remove the leverage, turn the body." By removing the leverage and turning their body my students were able to escape my attempts to fell them or apply qin-na on them.

They were especially surprised and amazed at the idea of "General Receives Horse" to reverse attempts to throw them. One of them said it was "like magic."

The two students had been training kung fu from other schools but had no ability to apply their kung fu for sparring, and they confided in me that no one in their schools had internal force.

To many martial artists, our kungfu is like magic. Some may accuse us for lying or boasting, though we always speak the truth.

Our kungfu not only enables us to be combat efficient, but also contributes to our good health, vitality, longevity, peak performance and spiritual joys.

Hence, a poetic couplet we cherish in our school is as follows:

It is a norm today that most kungfu students cannot apply their kungfu for sparring, and they have no internal force.

There were no injuries during the training, although one of them had some soreness in his arms after we did some arm-knocking so that he could feel the difference between me using muscular strength, me using flowing internal force, and me using consolidated internal force.

He told me that using flowing force "made my arm numb and it felt paralyzed for a few seconds," while using consolidated force simply bounced his arm out of the way in a very forceful manner.

Your student's descriptions are both apt and interesting.

I held my palm over his forearm and circulated the palm, used the thought that you said for healing, and it seemed as though my palm moved of its own accord, as though qi knew where to go. For that, I must thank you again for your excellent example in teaching as well as your autobiography on the art of teaching.

You did excellently. It is always good to take precaution that his arms could be damaged in arm knocking, as well as precaution for yourself by flicking your hands.

Qi knows where to flow. The injured parts of your student's arm are areas of low qi or low energy. Your palm is an area of high qi. Qi always flows from high levels to low levels.