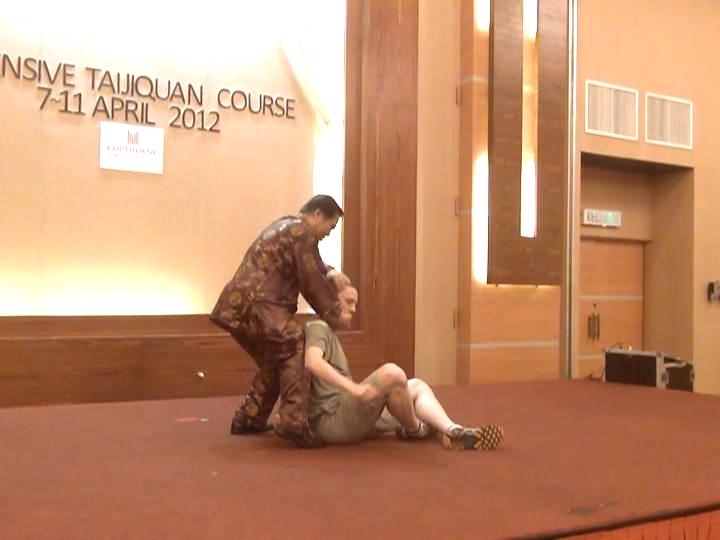 Would you ever consider writing a book on Taijiquan Qin Na?

I would very much like to as I have much to write about, but I have to decline. I like other instructors such as Leo of Austria to do so. They have much experience and they should share some of their experience with others.

Would you say it's possible for a small person but with internal force to overpower a heavier, muscularly stronger person in physical activities like lifting heavy objects, arm wrestling, doing pull-ups, physical labour, etc.?

If a person has internal force, he will be able to lift a greater mass than another who uses muscular strength. There are many people in kungfu who are not muscular but produce a lot of energy. It is difficult for those who only use muscular strength, like muscles with big mass, to understand.

Sifu Gu Ru Zhang, for example, was a slender man who used internal force, and was famous for hitting a horse without leaving any external mark. We have a lot of ladies who can fell muscular men, and the ladies themselves were very surprised.

Internal force does not depend on age, size and gender. A 70-year old lady can fell a hefty young man at 30. 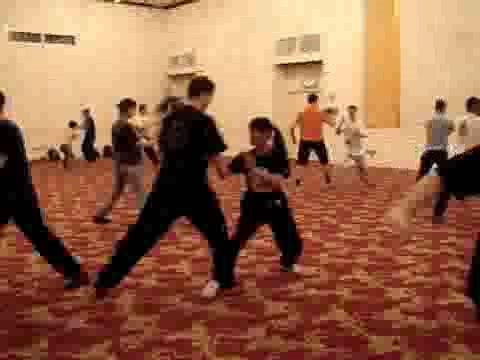 Internal force does not depend on age, size and gender

Similarly, would an athlete who completely stops his strength, endurance and stability training and just focuses on internal force be able to maintain (or even surpass) his former fitness/performance level?

Sifu Roland Mastel is a good example. He is a top-class sportsman who trains Olympic athletes. Because of his dedication, he has developed a lot of internal force. I remember that when he was pain free due to his training of internal force, I was very happy.

We have a lot of examples like him in Shaolin Wahnam.

What practical methods for testing whether someone has internal force would you recommend?

An orthodox way to test internal force is Three-Star Knocking Arms. Two combatants sit at a Horse-Riding Stance facing each other. They systematically knock each other's arms.

I remember that many years ago, a Shaolin master belittled Taijiquan, which I was interested. He knocked his arms against a pillar of his car porch and it shook, but I was not impressed. He then asked whether I was interested to have Three-Star Knocking Arms with him. He literally lasted only two rounds. When I was ready with my left arm, he backed away. 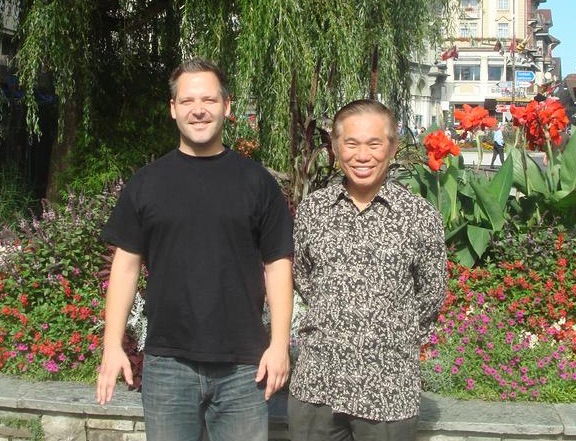 I used to do much physical training before I started my Kung Fu journey, but on your advice, reduced it to a bare minimum. Now I've already lost 7 kg, and I ask myself whether my daily force training will compensate my loss of muscular strength in the near future, especially in physical labour.

In other words, if a person is too heavy, he would lose body weight, though the mass of the body remains the same. If he is too light, he would gain weight.

A good sign of internal force is a small drum at his dan tian, or abdominal energy field. But the small drum is usually not discernable.

It is always a pleasure to write to you. I just wanted to send you my greetings, and to send you my usual "thank you" for what I got in my life because of your teachings.

I always remember you as the one who loves you wife and daughter and the one who extinguishes a candle flame in a cup. Accomplished in the Shaolin arts is better than changing stones to gold by touch. 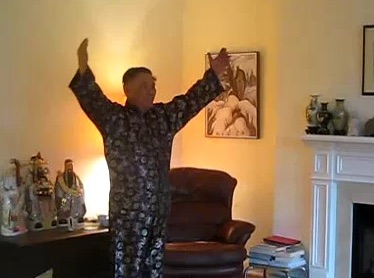 The target of stance training, for example, the Three-Circle Stance or Golden Bridge, is to build internal energy in the dan tian (or abdominal energy field about 2 inches below the navel). We should be without thoughts and do nothing.

"Yin" and "yang" are two philosophical terms that are often misunderstood. Many people, especially in the West, think of "yin" and "yang" as absolutes, as the two forces that are feminine, regressive, dark, lower part, structural, and their counterparts which are masculine, progressive, bright, upper part and substantial. They think, wrongly, that what is "yin" must always be "yin", and the counterparts must always be "yang".

This is incorrect. In its simplest form, there are two aspects of the same reality. What is "yin" can sometimes be "yang". For example, a mouse is regarded as "yin", because it is compared to a bigger animal, like an elephant. The comparison is usually understood; it is not mentioned. But if we compare an elephant with the whole forest, then the elephant is "yin".

Night is often regarded as "yin", because it is compared with day. But if we compare two places at night, the one that is lighted is considered as "yang", and the other one with little light is "yin".

Another philosophical concept that is misunderstood is "wu-xing" or "five elements", which are represented as metal, wood, water, fire and earth. They are not five elements, but five elementary processes.

Masters have discovered that there are countless processes but they can be classified into five elementary processes represented as metal, which is sonorous; wood, which shows growth; water, which is flowing; fire, which is rising; and earth, which comes together.