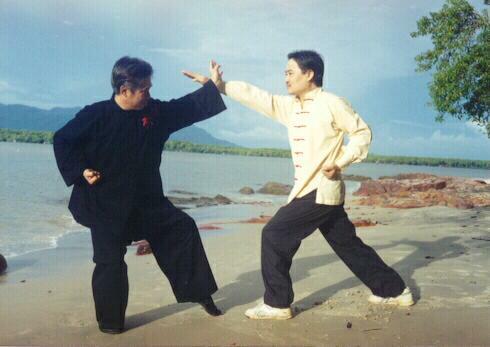 I was wondering how someone would go about finding a good Shaolin Kung Fu school in America and also how to go to a place like Malaysia to study intensely.

It is wise to spend some time finding a good kungfu or chi kung school, instead of just registering at the first one that comes along as many people do.

Obviously two crucial factors are the master (or instructor) and the material he teaches.

A good master should

There are four main ways to find out whether the kungfu taught is genuinely Shaolin: by examining

Many foreign students travel to Malaysia for about a week to study with me intensively. Those interested could contact me, and inform me of

From this information, I shall work out a special program to meet their individual needs.

What does Shaolin Kungfu represent? What is the purpose of learning this style?

Shaolin Kungfu is the style of martial art first developed at the Shaolin Monastery in China, and is now practised by many people in various parts of the world irrespective of race, culture and religion.

In my opinion, shared by many other people, Shaolin Kungfu represents the pinnacle of martial art development. Indeed, as early as the Tang Dynasty in China more than a thousand years ago, the saying "Shaolin Kungfu is the foremost martial art beneath heaven" was already popular.

Shaolin Kungfu trains us to be mentally focused, and enables us to expand our mind. At its highest level, Shaolin Kungfu leads to spiritual fulfillment, irrespective of religion. Obviously, Shaolin Kungfu is not just a fighting art.

It is also significant to note that an important aspect of the Shaolin teaching is direct experience, which in this case means that a Shaolin disciple does not merely talk about good health and mind expansion, or just read up on spirituality, but actually experience these benefits. If he does not experience, according to his developmental stage, the appropriate results Shaolin Kungfu is purported to give, he should seriously review his training.

It is quite easy to convince your parents of your good intention if you can do the following three things.

One, be kind and filial to your parents, even if they seem unreasonable at times. You and other young people may find it hard to believe, but having your parents living with you is one of the most blessed things that can ever happen to you.

Two, be kind and helpful to the elderly. For example, you can find some time to talk to them. This is something you can easily do, and which they will much appreciate.

Three, be charitable to others, including strangers. It is a mistake to think that one can be charitable only if he or she is materially rich. Charity starts from the heart, and is expressed in actions. If you can be tolerant to your friends when they irritate you, or help a child in need even if it involves some trouble, you would have been charitable.

These three things are actually very easy to do if you want to do them. In this way you prepare yourself to be deserving of the wonderful teachings of the Shaolin arts. 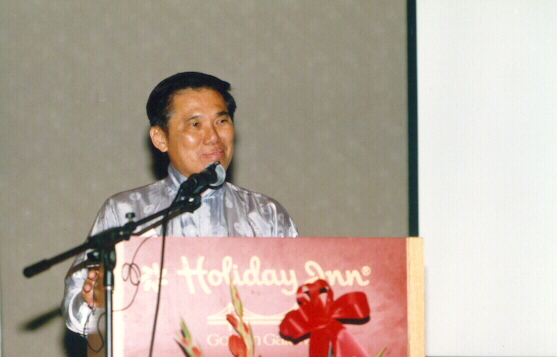 I would like to get information on the Chinese monks who are learning kung fu in the Shaolin Monastery in China.

Chinese monks from the Shaolin Monastery teach in many of these schools and the wushu taught is of a very high standard. The Chinese government believes that modern wushu is more appropriate than traditional kungfu to meet the needs of today's mass population, and I agree the government is right, although as a Shaolin disciple I would like to see traditional Shaolin Kungfu preserved.

I saw at an international competition participants of various styles fight like children. Can kungfu really be used for fighting?

Nevertheless, today an overwhelming majority of those who say they practise kungfu, in both the East and the West, either fight like children or use karate, taekwondo or kickboxing techniques to fight, but not the kungfu techniques that they may perform beautifully in solo practice. Please note the point here is not their fighting ability, or whether kungfu is better or worse than other fighting arts, but whether kungfu students use kungfu to fight.

Force training and sparring practice have to be approached methodologically and systematically. Skipping over a rope and lifting weights, prancing about and donning boxing groves are not traditional Shaolin ways to develop force and train sparring. It is only sensible that if one wishes to fight like what a Shaolin exponent would do in the past, he or she must train the way a traditional Shaolin disciple did. But for various reasons, many people lack the knowledge or the patience to do so.

The Latin names of the herbs are as follows:

In some types of chi kung you have the tip of your tongue against the roof of your mouth and keep the spine straight and bend your knees. You don't mention anything about this in your book, Chi Kung for Health and Vitality. Isn't it used here?

The purpose of having the tip of the tongue against the root of the mouth is to aid the connection of energy flow between the du meridian and the ren meridian at the upper gap located at the mouth. The lower gap which is located at the anus, is connected by holding the anus. (The du meridian is the one running from the tip of the backbone up the spine, round the head to the upper lip, and the ren meridian is the one running from the lower lip to the anus.)

Keeping the spine straight is essential for good posture. Bending the knees helps to stabilize the stance. These practices are common in many types of chi kung, including mine.

However in the chi kung exercises described in my book, Chi Kung for Health and Vitality, I have not emphasized them for two important reasons.

One, except for keeping the spine straight which is mentioned in such an instruction as "stand upright and be relaxed", the other two practices are not mentioned because actively connecting the du meridian and the ren meridian are not essential in most of the exercises, and these exercises are normally performed with the legs standing straight (but not locked). In other chi kung exercises, such as the Small Universe and the Three-Circle Stance described in my first chi kung book, The Art of Chi Kung, these two instructions are mentioned.

Two, for the untrained, keeping the tongue against the upper gum may be a distraction, and bending the knees hinders the performer from stretching his body fully as required in such exercises as "Lifting the Sky" and "Plucking Stars". 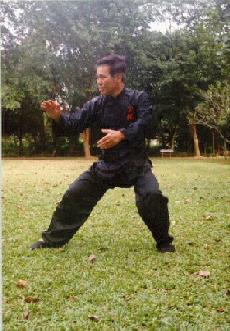 Aim for its essence, not just its outward form, when practicing Taijiquan

I met a tai chi sifu here and he showed me some movements that I tried but it was too painful to do them so I stopped. I would like to improve my flexibility but as I said before I can't warm up. Do you know a way to stretch without warming up so I won't hurt myself?

From the western perspective, one has to warm up before doing stretching exercise. Hence you have a problem: you want to improve your flexibility but you can not warm up. However, this is a problem only if you view it from a typical western perspective.

From the chi kung or kungfu perspective, the problem is irrelevant, because one can achieve flexibility without first having to warm up. This may sound odd to someone used to the western way of thinking about warming up and stretching. But if you take a few minutes to reflect, you may even find this western view odd. For example, if someone were to attack you, you do not ask your attacker to wait while you warm up; you have to react immediately, and you have to be flexible in your reaction in order to handle the attacker effectively.

A kungfu student is trained to handle attacks immediately and effectively. Many of the chi kung exercises explained in my books can enable you to be flexible without the necessity of warming up in the western manner.

I have been practising Taijiquan for many years but I cannot feel any internal energy flow like what you have described in your book. How should I train?

One very helpful point for your Taijiquan (Tai Chi Chuan) training is to aim at its essence, and not just its form.

What do we mean by aiming at its essence? It simply means aiming to acquire the real benefits that all Taijiquan masters and Taijiquan classics have said practising Taijiquan will give.

The fundamental benefits of practising Taijiquan are good health, vitality and combat efficiency. So, if a person has practised Taijiquan for 20 years, knows many Taijiquan sets and a lot of Taijiquan theories, but is still sickly, easily tired and cannot effectively defend himself, he has missed the essence of Taijiquan; he has merely practised its outward forms.

The art to train this internal energy flow is chi kung (qigong). Hence, Taijiquan without chi kung is missing its essence. When practised properly, Taijiquan is a complete set of chi kung itself.