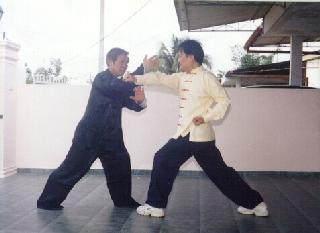 Taijiquan is often described as flowing. Can you please explain what does that mean?

Do you know why Taijiquan (Tai Chi Chuan) is regarded as a Taoist martial art? It is because both its philosophy and practice are derived from Lao Tzu's "Tao Te Ching", the principal canon of Taoism. In terms of philosophy, the principle of yin-yang is perhaps the most well known. In terms of practice, the flowing characteristic of Taijiquan is most noticeable.

A performance of Taijiquan is often described as poetry in motion; this is mainly because of its exquisite flowing momentum. Taijiquan masters commonly tell their students that once they have started their Taijiquan movements, there is no beginning and no ending -- the whole set of Taijiquan is performed as one continuous flow.

As Goh withdraws his attacking arm to prepare for the next move, Sifu Wong flows with Goh's movement, following the withdrawing movement but guarding his hand to prevent Goh's counter-attack. Continuing the momentum, Sifu Wong flows in for an arm strike with the "li" technique

This flowing characteristic of Taijiquan is derived from "Tao Te Ching". Section 78 of this Taoist canon reads as follows:

In Taoist writings, water is not just water. Here, water refers to that of the Five Elemental Processes (commonly mis-translated as Five Elements) that symbolizes flowing momentum.

The first picture shows what would happen if Goh fails to respond appropriately. As Sifu Wong sinks down his stance, Goh would be injured or pushed away. The second picture shows an appropriate response. Goh "floats" Sifu Wong's attacking arm, and thrusts a leopard punch into Sifu Wong's ribs.

But what should the Taijiquan exponent do if the opponent breaks the smooth movement and counter-attacks? Suppose the Taijiquan exponent has planned to execute seven actions -- A, B, C, D, E, F, G -- in one smooth flow. These seven actions constitute a tactical sequence as follows: Let the opponent makes the first move. Issuing from his move, flow in to execute three consecutive attacks using a right arm press, a left palm strike and a right vertical punch. These seven actions should not be performed in seven moves, but in one continuous move.

However, the opponent breaks the flow at the third action, C, and counter-strikes. What should the Taijiquan exponent do?

The Taijiquan exponent should make an appropriate modification or change at C and continue the flow -- using the originally planned patterns or new patterns. In the example given in the pictures above, he continues with the same planned actions, namely D, E, F, G.

Without moving his feet, Sifu Wong shifts his body backward to avoid Goh's leopard, brushes away the attacking arm with a circular sweep of his right hand and simultaneously strikes Goh's face with his left palm, using a pattern called "Green Dragon Shoots Pearl".

But before he can complete his sequence, the opponent breaks his flow again, this time at E. Now instead of making a modification, the Taijiquan exponent makes a change, and immediately follows up with two new actions, H and I. Hence, instead of executing the actions A, B, C, D, E, F, G, which was originally intended, he executes A, B, C, D, E, H, I. All these actions, including the modification at C and the change at E must not be performed as individual actions, but as one flowing movement.

Can one effectively apply the flowing characteristic of Taijiquan in real combat? Or can he make appropriate modifications or changes in the midst of blows and kicks? He certainly cannot if he practises Taiji dance, or even if he has learnt genuine Taijiquan forms, he goes straight to free sparring.

Effectively applying any techniques or tactics in free sparring needs systematic preparation before the actual free sparring. He also needs basic skills like spacing, timing and judgement. These can be acquired through training like Stance Training, Pushing Hands and Combat Sequences.