COULD A KUNGFU STYLE BE PASSED DOWN BY A DIVINE BEING? 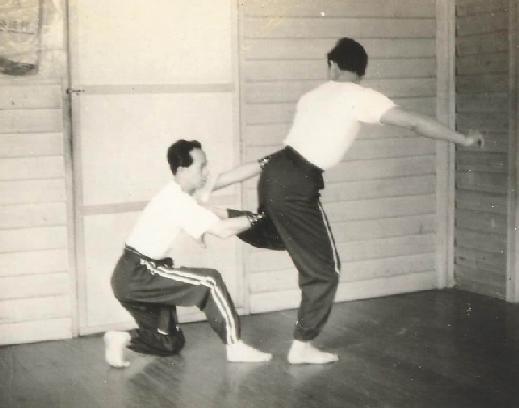 In an earlier Q&A, you briefly mentioned that you believe Dong Hai Chuan learned Baguazhang from a Taoist immortal:

There were a few possible reasons. One, they were in contact with Universal Mind, which is omnipresent and all knowing. Two, they reached into their own deeper levels of consciousness, which revealed kungfu movements they had seen or had learnt in past lives. Three, they were in contact with some higher beings who transmitted the kungfu movements to them. This, I believe, could be the case of Dong Hai Chuan, the First Patriarch of Bagua Kungfu, who said he learned the art from a Taoist immortal on Hua Mountain.

Can you kindly elaborate on this?

Could Baguazhang be a martial art passed on to mankind by immortals?

It is understandable for most people to think it a crazy idea when told that a martial art was transmitted to a master by a non-human being, like a god or an immortal. Before I learned from my sifu, Sifu Ho Fatt Nam, in the early 1970s, I myself would not believe such an outlandish suggestion.

But my training with my sifu gradually changed my perception of the supernatural, not though instructions from my sifu but through my direct experience of events that actually happened.

When I first went to my sifu's house to learn kungfu, I was very surprised to find many statues of gods and buddhas on an altar. I clearly remember telling myself that I went there to learn kungfu, not religion or metaphysics. I knew my sifu was a rare and great Shaolin master, though not many members of the public knew that. Later I found out that the general public knew him as a great spiritual teacher.

If I claim myself to be scientific, like basing my conclusions on actual events and not on speculations, I would have to accept that spiritual beings exist, though most people would not have the opportunities to see them. One of the series of events that convinced me of this fact is my series of conversations with Immortal Li, one of the famous eight Taoist immortals.

Members of our Shaolin Wahnam Family also have told me their supra-mundane experiences. A senior student, for example, told me that the late Grandmaster Lam Sai Weng, appeared to teach him Iron Wire. The lessons did not happen in dreams, but in real life and the grandmaster appeared just like a normal person.

The amazing part was that this senior student, who is not Chinese, had never heard of Grandmaster Lam Sai Weng before, and did not know about Iron Wire. It was later that he saw pictures on my website that he realized the metaphysical teacher was Grandmaster Lam Sai Weng. And it was when he showed me what he had learned from the metaphysical teacher that I told him it was Iron Wire. Having been personally taught by the grandmaster himself, of course, this student's Iron Wire was excellent.

An instructor told me that a warrior-god appeared to transmit to him some lessons. I can’t remember whether this occurred in his dream or waking life. But one day when we visited a Chinese temple, this instructor, who is not Chinese, was surprised to see a statue of the warrior-god was exactly the same as the one who appeared to transmit to him some lessons – the same in appearance and in attire! This warrior-god is very closely related to our school.

With this background knowledge, we shall better understand the answer here as well as the one in my Question-Answer series.

In our chi kung classes, it is not uncommon to find some students burst into kungfu movements during chi flow. Usually these kungfu movements are gentle and graceful, like Taijiquan. Sometimes they can be vigorous, like Shaolin Kungfu.

One memorable example was when Dr Daniel in Belgium performing powerful Lohan Kungfu while in chi flow. Daniel had not learned any kungfu before. The chi kung lessons with me were to help him overcome a serious heart problem.

After performing some chi kung dynamic patterns, Daniel first went into some gentle chi flow. Soon the chi flow became not just vigorous but manifested in solid stances and powerful patterns that I could easily recognize as Lohan Kungfu. 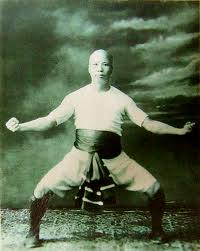 Normally such vigorous movements are not what a patient with a serious heart problem should do. Being a medical doctor himself, Daniel knew this, but he was not concerned and was actually enjoying himself. With my understanding of chi kung philosophy knowing that self-manifested movements from chi flow are very safe, I was not concerned, and told me, as usual, “Carry on. Enjoy yourself.”

Indeed, I was so impressed with his chi flow movements of Lohan Kungfu patterns that I composed a Lohan Kungfu set for him to practice after his recovery. Of course, he recovered from his serious heart problem. I had no doubt about this right from the start.

Daniel did not have to go for the heart surgery which his colleagues demanded. He also can enjoy playing tennis and skiing which his heart specialist friends said he could never do again.

Daniel's performance of Lohan Kungfu during his chi flow was due to one of three possible reasons as explained in my Question-Answer series, namely he was in contact with the Universal Mind linking him with someone performing Lohan Kungfu, he reached deep into his own unconsciousness of one of his past lives when he was a Lohan Kungfu master, or a supernatural teacher taught him while in chi flow.

In Daniel's case the most likely reason was the second. He was a Lohan Kungfu master before in his past life.

The first possible reason was not likely. If it were, Daniel’s performance would not be so beautiful and so powerful. It would also not happened every time he had a chi flow.

The third possible reason was also not likely. If it were, his progress would be gradual and systematic. He would not be able to perform beautiful and powerful Lohan Kungfu the first time in his chi flow, and maintained the very high standard every time.

In the case of Dong Hai Chuan, the First Patriarch of Baguazhang, the third reason was most likely, i.e. he learned Baguazhang or the essence of his art which later came to be called Baguazhang from a Taoist immortal.

Please read here for the second part of the answer