WHAT SPECIAL BENEFITS ONE CAN ATTAIN AT THE CHOY-LI-FATT COURSE? 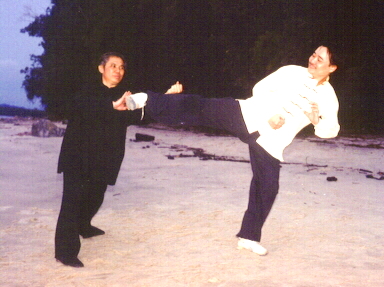 Sifu what specifically does one stand to attain from the Choy-Li-Fatt course, besides the obvious multi-opponent combat advantage and the opportunity to learn the form from an internal perspective. This is in relation to other styles already ingrained in Shaolin Wahnam.

In relation to other styles and courses already taught in Shaolin Wahnam, the following are specific benefits one can attain from the Choy-Li-Fatt course at the 2012 Winter Camp in Norway.

One remarkable improvement I had when I learned from Sifu Ho fatt Nam after I had leant from Uncle Righteousness was a tremendous increase of force. I felt I was not very forceful in my kungfu performance, so during a chit-chat I asked my sifu, Sifu Ho Fatt Nam, how I could increase my force.

He told me to practice Thirty Punches with stone-locks. He did not have to show me how to do it as he had earlier taught me Thirty Punches (with empty fists), but he explained how to make stone-locks using cement, iron bars or strong cane.

It was amazing. After practicing Thirty Punches with stone-locks for only a few months, my force increased so dramatically that when I performed a kungfu set I caused "khuen foong", literally "fist-wind", or audible vibrations in the air. I was very happy as it was described in kungfu stories that only high-level masters could cause "fist-wind".

Stone-locks are quite clumsy. In the Choy-Li-Fatt course we shall use more elegant dumb-bells, which I believe can even produce better results. It will be the first time in Shaolin Wahnam history that I teach using dumb-bells to increase force.

Practicing with dumb-bells to increase force is an external method. We in Shaolin Wahnam are very special. After teaching students the external method so that they can have some experience of it, I shall teach them how to practice the same method in an internal way using chi flow. The students will then have a comparison between the external and the internal approach of the same method. They will also be amazed at the result.

3. Technique of Whirl-Wind Fists and its Counters

Imagine you are holding two iron rods and swinging them methodologically on an opponent. If he attacks you, you hit his attacking arms with your iron rods. If he retreats, you swing your iron rods on his head or body. Now you use your arms like two iron rods, which is actually more versatile.

This is a famous technique in kungfu but is little understood because it requires some subtle movements to make it effective. It is known as "foong chei khuen fatt" or the "technique of whirlwind fists", and is very formidable if your arms are powerful and you know the subtle movements which will be taught at the course.

Now suppose your opponent uses "whirlwind fists" on you. How would you defend yourself? Many people would be at a loss facing two powerful swinging rods. Students at the Choy-Li-Fatt course will learn effective counters against these "whirlwind fists".

Choy-Li-Fatt is a very formidable art against most opponents, but there are some innate weaknesses, and a high-level master could exploit these weaknesses. However, not many people know these innate weaknesses, and less know how to exploit them. When you realize how many free offers people hand out in free sparring today, and how seldom their opponents take up these free offers, you would not be surprised at the above fact. 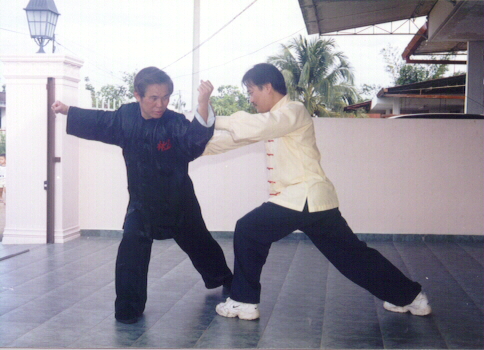