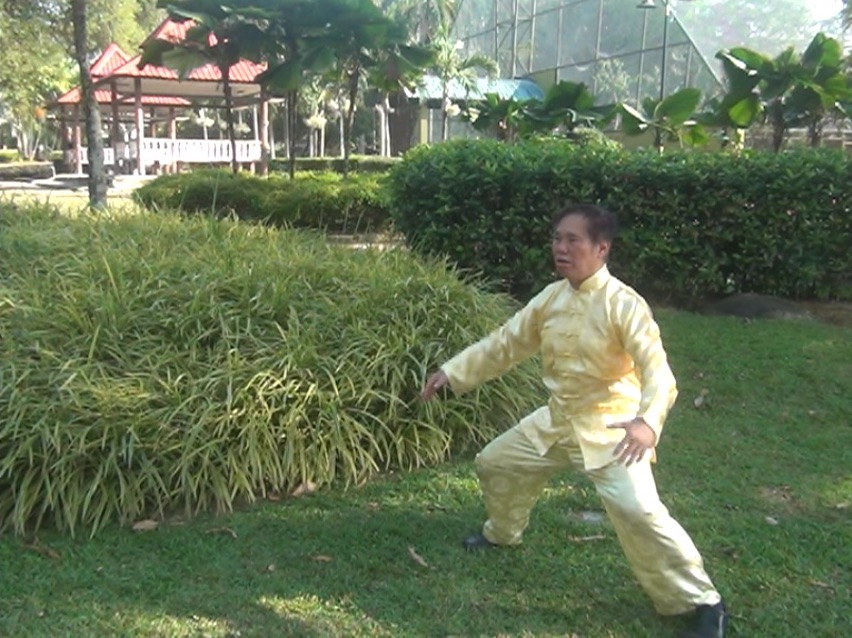 I learned the "Dragon Strength Chi Circulation Set", or "Loong Lek Wan Hei Khoon" in Cantonese and "Long Li Yun Qi Quan" in Mandarin, from Uncle Righteousness, my first kungfu sifu, about 1955. It was one of Uncle Righteousness' specialized sets.

But when I first learned it, I had no "dragon strength", and did not know how to circulate chi. These and other abilities came much later. My first introduction to these advanced and fantastic abilities with the "Dragon Strength Chi Circulation Set", or "Dragon Strength" for short, was my training with Sifu Ho Fatt Nam, the third generation succesor from the Shaolin Monastery at Quanzhou.

When Sifu Ho Fatt Nam knew that I had kungfu experience before, he asked me to show him my best kungfu set. I showed him "Dragon Strength". After my performance, he said, "This is a very beautiful set, but you don't know how to use it for combat." My sifu hit the nail on the head. It was exactly to improve my combat efficiency that I went to learn from him, after hearing the true story that he had singly and compassionately fought off more than 35 people armed with spikes and scimitars out to kill his family and burn his house. I did not know at that time that I also learned internal force and other fantastic kungfu skills that are thought to have been lost.

My first experience of the fantastic abilities I could perform with Dragon Strength" was when I could use mind to direct energy flow to direct physical form, or in Chinese (Cantonese) as recorded in kungfu classics, "yu shen hang hei, yu hei hang ying". Earlier I read that such skills were only available to top kungfu masters.

A memorable demonstration of such high-level skills was at the University of Science in Penang in the 1980s. My movements were very powerful, and they were so fast that often spectators could not see them! I was not tired or panting for breath after the demonstration. An old video showing the demonstration can be found here.

Transferred to daily life, I could perform physical activities forcefully and fast, and not tired nor out of breath. Later I could also transfer the skills to perform intellectual work. "Dragon Strength" has become my pinnacle of kungfu training.

I am very happy I could pass on the "Dragon Strength" set and its very high-level skills in December 2014 to deserving students. So many people applied that I had to conduct two such courses, one from 6th to 12th December, and another from 12th to 18th December.

Dragon force and dragon speed are not known to the public. Many people may not believe them if these very high-level skills are explained to them. I demonstrated dragon force a few times to my students, who were masters in their own right. They held me tight with some "unbreakable" hold, but with a slight shake of my body, not only I released the hold but also sent them flying many feet away. They had to perform a chi flow to prevent any possible injury. One person described the effect like being hit by a locomotive.

Skillful practitioners could employ dragon speed to perform any movement so powerfully and fast that others could not see the movement. In combat, practitioners could operate at the speed of thought. Such high-level skills are also very beneficial in daily life.

Dim mark, or striking energy points to disable opponents, is thought to be a lost art. It was unbelievable that course participants acquired this art in just five days! How do we know that course participants have acquired the art? They tried it on their friends, and it worked. For example, Damian (Dr Damian Kissey) struck Kevin's energy point with a phoenix-eye fist, and almost immediately Kevin (Sifu Kevin Barry) collapsed and feinted. When Marisa applied dim mark on Hubert's right shoulder, Hubert (Sifu Hubert Razack) felt the effect straight-away, like "some dark ink spreading through a sheet of paper". Soon Hubert lost control of his right arm and shoulder.

Not only the course participants learned dim mark, they also learned how to take the injury away. After the healing, the "victims" regained normalcy. Dim mark is actually a compassionate art.