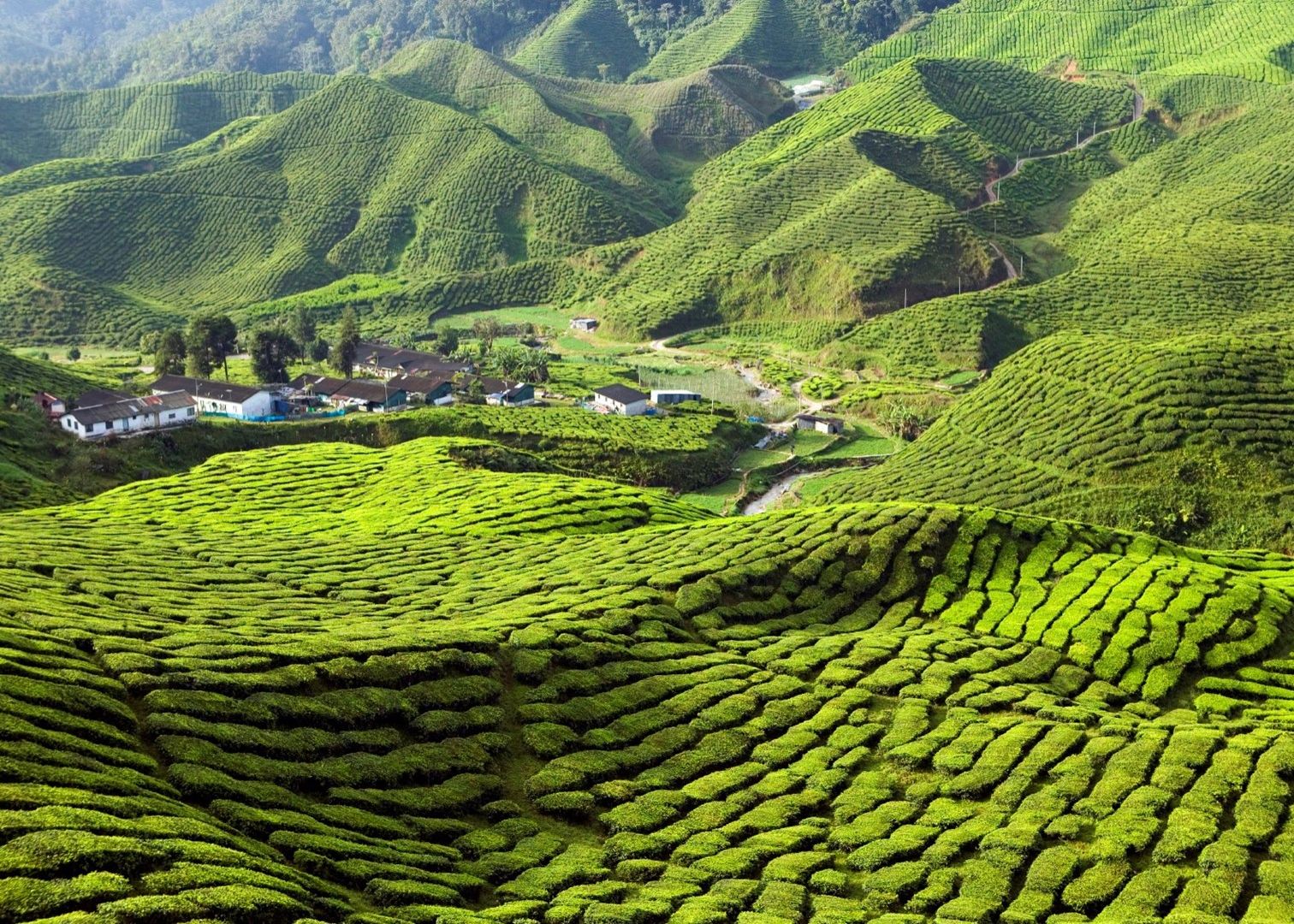 Cameron Highlands is famous for tea, but we didn't visit this tea plantation. Picture taken from https://www.1dasia.com/tours/cameron-highlands-day-trip-tour-package_980/

My wife and I, my eldest daughter, Sau Foong, and her husband, Swee Huat, and my second daughter, Wei Foong, left Sungai Petani at about 9.30 in the morning of 14th June 2018. We had breakfast at a noodle shop. Then we drove to Cameron Highlands by highways.

We stopped at a Chinese restaurant in Ipoh for lunch. My wife, whom I courted about 50 years ago, lived in Ipoh for a few years. Ipoh, which is the capital of the state of Perak and one of the largest cities in the country, is famous for pretty Chinese girls. It is reputed that the surrounding hills and streams have made them fair. So if you want a Chinese girl for a wife, you may want to come to Ipoh, which is also well known for food.

After lunch, which was about 2.00 in the afternoon, we went uphill to Cameron Highlands. There are two routes up the highlands, one from Ipoh and the other from Tapah, a small town in Perak about 50 kilometers away from Ipoh. At first there was only one route, the one from Tapah, which is about 60 kilometers long. The route from Ipoh was built later, and it is about 90 kilometers, but the road, being built later, is much wider.

I recalled the time when I went up to Cameron Highlands about 10 years ago, also by the Ipoh route. We stopped at a nursery with a lot of plants. Wei Foong mentioned to the owner of the nursery that the hottest chilly was from Mexico.

“Oh, we have some chillies from Mexico,” the owner said. “They’re not for sales, but I can give you one,” she continued.

A few days later I asked Wei Foong, “How was the Mexican chilly?”

“It’s very hot. I cut up the chilly and put the little pieces in a plate of soya sauce.”

“Even the soya sauce is very hot,” Wei Foong continued. Coming from Wei Foong, who is known to eat very spicy food, we can safely say the Mexican chilly was very, very, very spicy.

This time I missed the nursery, probably because I had a short nap in the car as we were climbing up the mountain. By the time I opened my eyes, Swee Huat was already parking his car at a lavender garden with a beautiful restaurant selling a variety of food. Of course, I had some lavender ice-cream.

We then went up the road to Brinchang, the second largest town on Cameron Highlands. Then we went to Tanah Rata, the largest town, where we booked into our rented apartment.

The apartment was well furnished, and had three rooms, one for my wife and me, one for Sau Foong and Swee Huat, and the third for Wei Foong. While the others were busy settling down, I played with my computer. The internet connection, however, was not good inside the apartment. But there was a balcony, and Swee Huat was gallant to carry a table to the balcony for me to play with my computer.

We took advantage of daylight. So we drove out of the apartment, visited the town of Tanah Rata and went to Ringlet, a small town at the lower reach of the highlands towards Tapah. On the way after passing Tanah Rata I pointed out to my wife a long row of plants where about 10 years ago she bought some exotic orchids.

Before reaching Ringlet, we came to a big river. I came out of the car to have a better view. As we reached Ringlet town, Swee Huat pointed to a restaurant where we had lunch about 10 years ago.

For our dinner, we went past our apartment to Brinchang where we believed we could find some good food. But before dinner we went round the town to look for the hotel where we stayed about 10 years ago. I remember there was some empty space in front, and there were also rows of shop houses. But we could not find the place.

This was because new buildings had come up within the last few years. Eventually Wei Foong and Swee Huat were sure of the hotel where we last stayed, though the empty space in front and rows of shop houses were no more there. Instead, there were new buildings, including a gigantic mall, being built.

There were surprisingly many steam-boat restaurants in town. However, there were also many tourists who came from various parts of the country, and the restaurants were full. In the end we settled in a small restaurant at the edge of town, but the food was delicious.

Then we went back to our apartment. The others watched television while I played with my toy, the computer.

The next morning we went to Brinchang again to have breakfast. It was a “dim sum” restaurant. “Dim sum”, literally meaning “dot-heart”, refers to small pieces of food to please the heart, and is usually eaten at breakfast by Chinese, though in the West it is often taken for lunch or dinner.

After breakfast we went downhill along the route to Tapah. It was a narrow, winding road that took a longer time than the other wider road from Ipoh. We arrived at Tapah, then went to Bidor. Both are small busy towns in the state of Perak in Malaysia.

At Bidor we went to a shop well known for duck-soup noddle. The shop was full of tourists, with many standing at tables to wait for their turns. As usual we had “sifu’s luck” and managed to get a table for ourselves, but we had to wait for a long time for our food as there were too many customers.

Meanwhile my wife went to the counter of the same shop to buy some biscuit for family members. She also took a long time just to pay money. Eventually she returned to our table to enjoy our meals. Duck-soup noddle was sold out, so we had "wan-tan" noodle instead, which was also delicious.

“Wan-tan”, which actually means “cloud-swallow” in Cantonese, is a small meat ball wrapped up with a layer of flour covering. I often complain that the flour covering is too thick, and the meat inside is little. But the best “wan-tan” I took was in Guangdong, China in September 2016 during some chi kung and kungfu courses. When taking the “wan-tan” in China I felt like swallowing clouds though I was actually eating delicious meat covered with a very, very thin layer of flour. 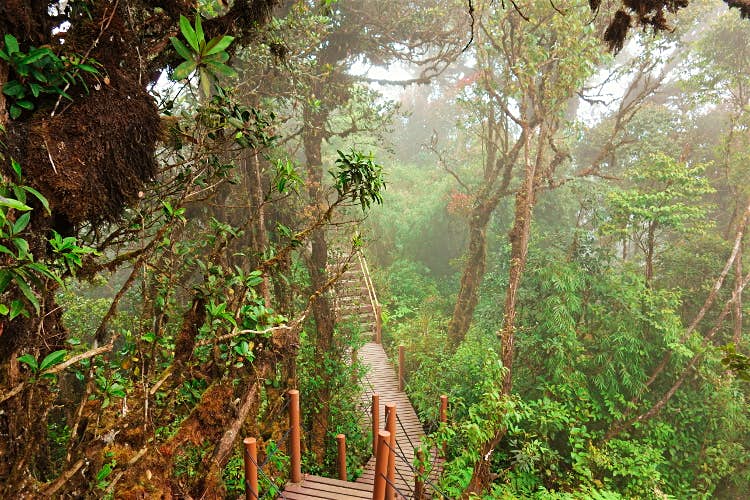 A jungle trek on Cameron Highlands, but we didn't visit this jungle trek. Picture taken from https://www.lonelyplanet.com/malaysia/travel-tips-and-articles/how-to-plan-a-trip-to-malaysias-cameron-highlands/40625c8c-8a11-5710-a052-1479d2762d8c

Video on Cameron Highlands and Sekinchan
Travels in Malaysia