KUNGFU: ITS AIMS AND MORAL CODE 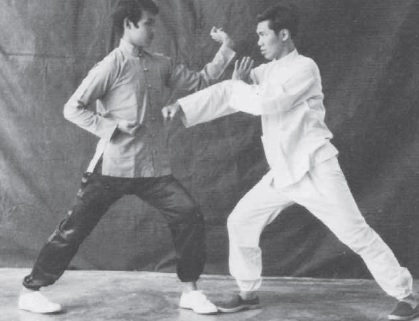 Sifu Khoi Koay Peng and Grandmaster Wong in the 1070s

One of the main aims of learning kungfu is for self-defence. In the ancient days before the invention of firearms, kungfu was often a matter of life and death for many people. That was why kungfu was so jealously guarded.

Nowadays, although this martial function is not so urgent as in the past, to be able to defend oneself in an emergency, or to protect dear ones in a forced situation, is certainly a great personal asset.

I have met kungfu masters and their students who claim that their aim to learn kungfu is not to learn to fight but to promote health. I feel that while its health aspect is undoubtedly very important, to practice kungfu without its fighting aspect, is to practice it without its essence. Kungfu without its self-defence function is not kungfu anymore, it becomes a system of physical exercise.

Here I wish to clarify an important point. To emphasise the fighting aspect of kungfu does not necessarily mean to encourage kungfu exponents to fight, nor to create opportunity so that they can fight. On the other hand, a kungfu exponent, knowing the devastating effect his skill can have on his opponents, should develop supreme self-control, tolerance and humility. The fighting aspect is for defence, not for aggression.

Health promotion is another very important aim in learning kungfu. When one practises kungfu, he becomes not only physically but also mentally fit and alert. In my opinion, kungfu is a better form of exercise for the promotion of health than many other forms of physical activity. A practitioner in other forms of physical activities often loses his vitality and strength as he ages, but a kungfu practitioner is often healthy and robust when he grows old.

The reason is that whereas most other physical activities develop the external body only, kungfu development is both external and internal. With the training of the three inner faculties of man -- jing, shen and chi, or essence, mind-power and intrinsic energy -- kungfu not only makes a person strong, agile and healthy, but also by training his internal systems prolongs his life. Kungfu masters generally live healthily to a ripe old age.

The third important aim of kungfu is character development. This is a very important aspect kungfu masters must not neglect to instill into their students. If they fail to do this, I personally believe they forfeit the honour to be called kungfu masters, they degenerate into mere instructors of some fighting systems.

Kungfu necessitates some very noble, knightly moral code. Among other things, three qualities, I believe, a student will automatically acquire in his long process of kungfu learning -- patience, insight and calmness. These qualities are pre-requisites of good kungfu: He needs patience to develop his techniques and force; insight to understanding the working of kungfu principles; and calmness to pin-point his opponents' movements in free sparring. These qualities automatically help a person to be sober and composed even in a tensed situation.

The spiritual, character-developing aspect of kungfu is clearly illustrated in the Shaolin Moral Code.

The Shaolin Moral Code is in three parts:

In the Shaolin Temple in the past, before a student was accepted, he had to swear a vow of obedience of the Moral Code in front of Lord Buddha, his master(s) and seniors.