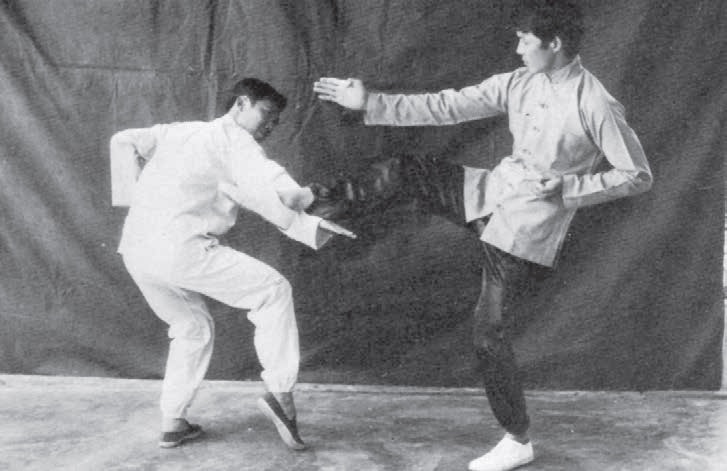 Pre-arranged sparring is an effective preparation for, and a great help to free sparring. A student with no or insufficient Combination Practice may often be at a loss as what techniques or patterns to use, when he actually engages in free sparring, even though he may be able to perform, individually, his kungfu sets well.

I have met many kungfu students who have learnt "kungfu" for many years. Unfortunately, almost all their training time is spent in pattern or set practice only. As a result they can perform the patterns or sets beautifully, with perfect accuracy of form, but without any knowledge of their uses, nor any force behind the form.

Consequently, when they are engaged in sparring they cannot bring out effectively the patterns that they have learnt in individual set practice. Personally I believe that such lop-sided emphasis on the set practice alone, with almost total neglect of the other kungfu discipline like Combination Practice, Force Training and etc (see page 2), is the main factor for kungfu degenerating into "flowery hands and embroidery legs", making kungfu decorative rather than practical.

The main objectives of Combination Practice are as follows:

On the following pages, a short section of the Dragon-Tiger Combination Practice is reproduced. 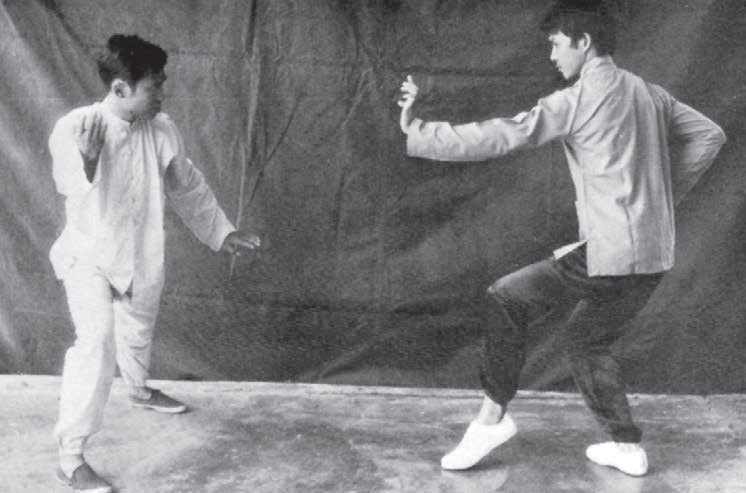 Exponent A (on the left) and Exponent B (on the right) stand watching each other at their poise patterns. 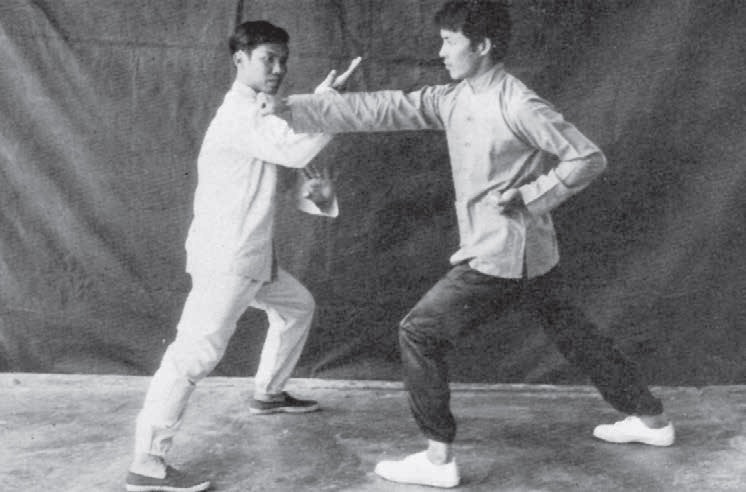 B springs in with "A Black Tiger Steals the Heart", attacking A's chest with a right punch. A responds with "A Beauty Looks at a Mirror", blocking B's punch with his right hand. Notice that A has moved his body away from B's target, by shifting into the Left Bow-Arrow Stance.

Instantaneously, B kicks A's lower vital organ, using his right spear-hand as a feint movement. A springs backward and sweeps aside the attacking leg with "False Leg Hand Sweep". 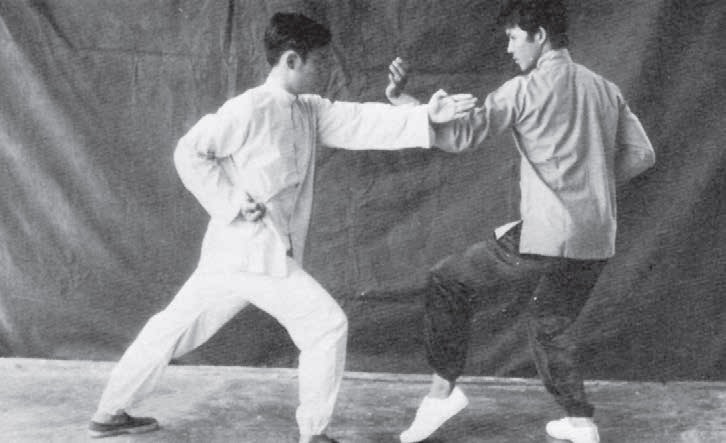 Immediately after sweeping the leg aside, A moves in with "A Poisonous Snake Shoots Out from its Hole" attacking B's chest with a pierce-hand. B places his kicking leg behind and blocks with "A Golden Dragon Plays in the Water". 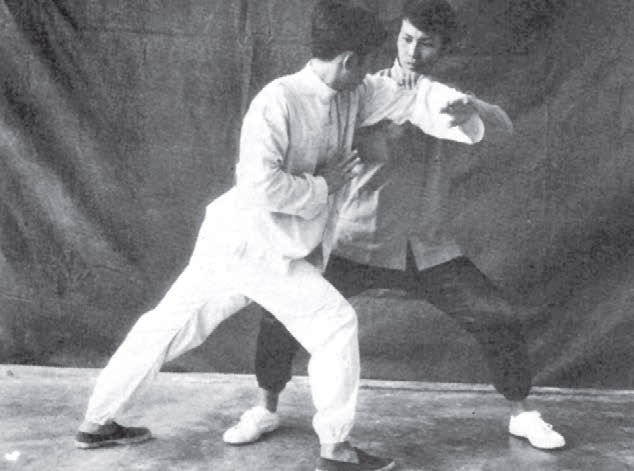 Instantly B grasps A's left arm at the elbow, and moves forward his right leg to the Horse-Riding Stance, striking A's side-ribs with his right elbow. This is a variation of "A Crow Flaps its Wings".

Notice that B pulls and lifts A's left arm so that he can execute his elbow strike more effectively. B should hold A's elbow, and not his wrist, in this situation, because holding A's wrist could allow A an opportunity to counter-strike with his left elbow at B's face. 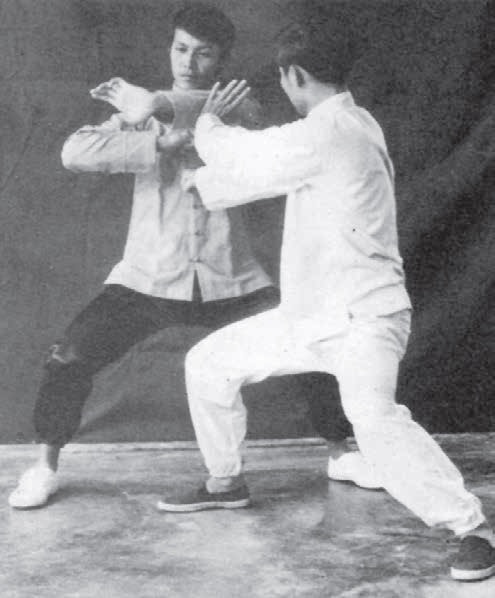 A swiftly brings his left leg a big step to his right side, smoothly turning his body as he does so, so that he is now at his Eight-Tenth Horse-Riding, facing B. As he turns, he "floats" B's arm with his left hand, and thrusts a straight punch at B with his right hand. The momentum of A's turning, as well as the circular movement of the floating action, help to release his elbow from B's former grip. 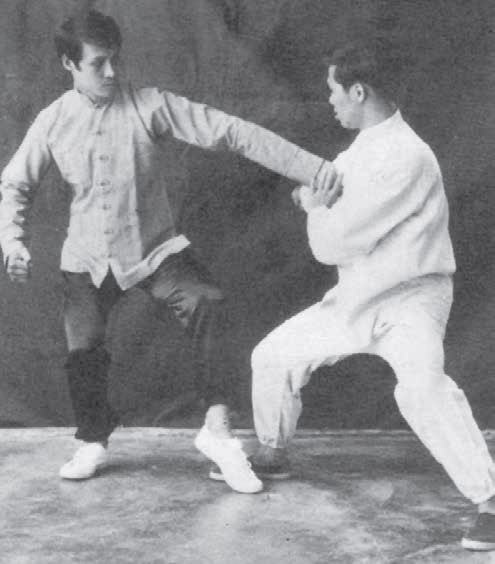 B slightly springs back on his right leg, slants his body backward, and simultaneously sweeps aside A's punch with his left hand. Then he grips A's wrist and moves in with a cannon punch. The figure shows the intermediate process of B gripping A's wrist, and changing his left leg from "outer gate" (outside A's front leg) to "inner gate" (inside A's front leg). 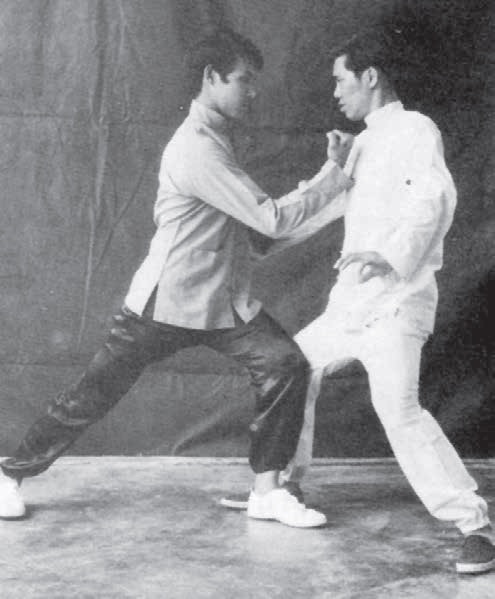 Some readers, who are not familiar with the seemingly difficult and elaborate kungfu techniques, may find these movements long and complicated. Actually they are not. With practice, these movements, like other kungfu movements described elsewhere in this book can (and should) be executed in split seconds.