SOME GENERAL PRINCIPLES OF KUNGFU 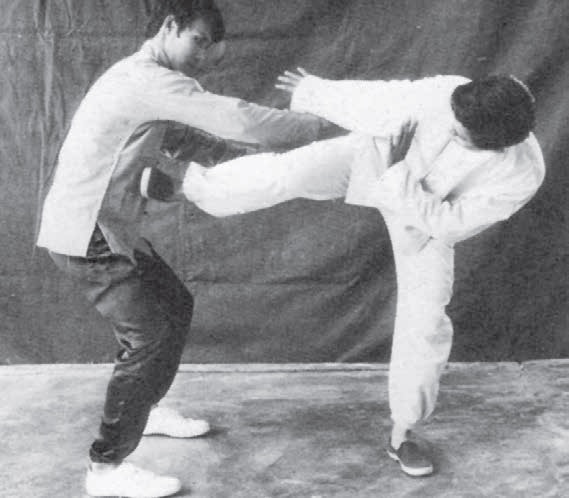 A combat application of Dragon-Tiger Set

In this chapter I shall discuss some of the important general principles in kungfu.

To learn a technique is just the beginning. When a technique is learnt, the student is now aware, or has the knowledge, that this technique can be used in a particular situation or situations. But unless he practises the learnt technique many times over, he cannot use that technique spontaneously, flawlessly.

It is analogous to playing a musical instrument or to swimming. One may learn the best techniques of playing an instrument or of swimming; but unless he practises diligently and consistently, he would not be able to play or to swim well.

One may learn techniques from a master, from books or even from seeing other martial artists performing. But he has to put in a lot of practice himself for each technique, before he can use the technique efficiently.

After learning and practising many techniques well one must select a few techniques -- basing the selection on one's own nature and skills, and the general usefulness of the techniques -- and master them. Mastering a technique implies not only that the technique can be executed skilfully, flawlessly and fast, but also that the exponent can vary the technique instantaneously to suit any situation, or to overcome any counter-attack. These mastered techniques then become "ultimate techniques".

There is some difference between "techniques" and "skills", and it is useful in kungfu to understand and appreciate this difference.

Let us take a few examples to illustrate the difference. The pattern "Lead a Horse Back to its Stable" (Pattern 23 in the Dragon-Tiger Set) shows a method whereby we can make use of the forward momentum of a charging opponent, to lead or pull him so that he falls forward. This is called a technique, and this particular technique is used to "lead" an opponent forward.

Having learnt this "lead" technique, the student now knows a method to counter a charging attack by "leading" the attacker forward to his fall. But he has to practise the technique many times so that he can acquire the skill to execute the technique effectively. If he does not have the skill, then although he has knowledge of the technique, he will still not be able to use it efficiently. In other words, he cannot put his theoretical knowledge into practice. Hence, skill is the ability to execute a technique efficiently; and skill has to be acquired, not learnt.

In the spear-piercing practice mentioned earlier in Chapter 11 (see page 152), when a student can hit the target every time he pierces, then he has acquired the skill of spear-piercing. A student who knows the technique of piercing -- like how to hold the spear correctly, when to pierce, where to slide his front-holding hand, and where to place his feet in relation to the target -- will understandably acquire the piercing skill easier and faster than one does not know the technique.

It can be seen, therefore, that technique and skill are complementary to and inter-related with each other; and neither one is superior to the other. We need techniques to acquire skills, and we need skills to execute techniques.

However, despite their complementary nature, in advanced kungfu the emphasis tends to be on skills rather than on techniques. A kungfu master would select only a few favourite techniques and practise them until he is very skilful in them. In combats it is usually the depth of skills rather than the wide variety of techniques that decides the winner. This brings us back to the importance of the principle Learn -- Practice -- Master. Learn many techniques, practise the selected few very well, and master at least one.

Skill includes three features: Accuracy, force and speed. To be skillful in a technique, one must be able to execute it accurately in terms of method, timing and placing; execute it with sufficient force so that the opponent can be hurt or be under control; and with sufficient speed so that the opponent cannot intercept or avoid that particular technique.

The Principles of Gradual Progress and of Perseverance

These principles of gradual progress and perseverance are closely related to each other, and are very important in kungfu, especially in the training of skill or force. Let us take running round a 400 metres track as an example to illustrate these principles.

As a person runs along the track slowly, there is a point when the runner first begins to feel tired or breathless. Every person has an endurance point which marks the distance he can run without feeling breathless. Suppose that the kungfu student can run 200 metres without feeling tired nor short of breath.

He continues to run the 200 metres on the second and the third day. On the fourth day, after running the basic 200 metres, he should, because of the cumulative benefits of his previous three days' practice, be able to run an extra few steps without feeling tired. If he cannot do this yet, then he should continue running just the 200 metres until his endurance increases.

Let us say he can add an extra three steps. Thus on the fourth day, he has increased his endurance point from 200 metres to 203 metres -- taking one step to be one metre for easy calculation. In this manner, with an increase of about three metres after every three days, the student can increase his endurance point from 200 metres to 400 metres after 200 days of constant daily practice. As he persists in his daily practice, after a few years he will be able to run round the track a few times without feeling any fatigue or breathlessness.

Generally the rate of progress is not uniform. But the principles work the same way-- there must be determined, consistent training to increase the endurance point, and the progress must be gradual.

Now let us take another example -- that of developing chopping power. Most untrained people may not be able to chop with their bare hands a piece of sugar-cane into two, but they will be able to do so to a small twig.

There must be progress in the training. If the runner runs only 200 metres every day, without any attempt to increase his endurance gradually at all, he may practise for many months but his ultimate progress, if any, will not be very much.

The principle of perseverance dictates consistent, regular training for a period of time. The training must be consistent and regular, preferably twice every day. If the training is not regular, it is impossible to achieve the desired result. In the above examples, if the student trains off and on only, he will not derive any cumulative benefit, and thus will not be able to increase his endurance point substantially.

The regular training must also be sustained for a reasonable period of time. How long the period is, depends on a few factors, like the type of skill or force desired, and the potentialities of the student. In general, very remarkable results can be seen after a year.