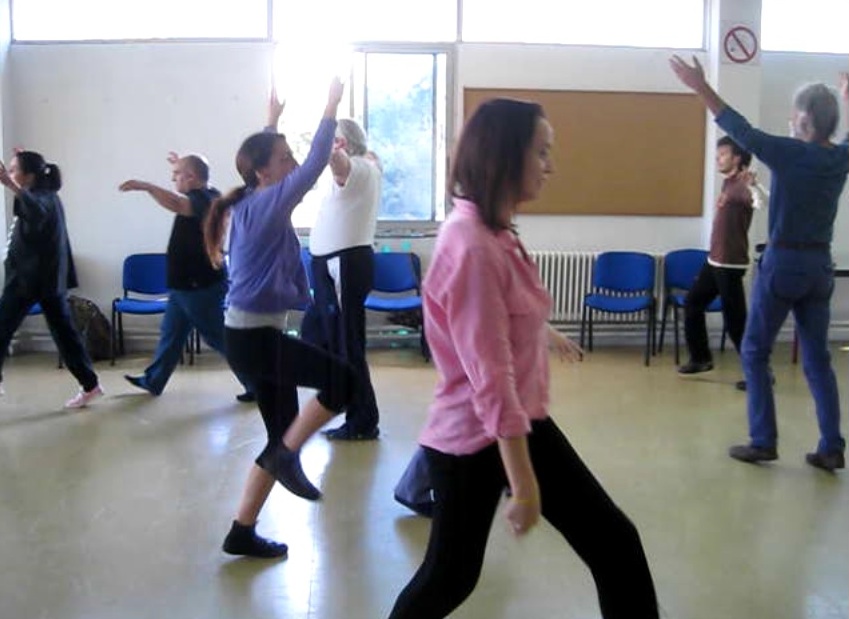 The Five-Animal Play of Hua Tuo

(This chapter is selected from Liang Shi Feng, Mobile and Quiescent Marvellous Qigong, Higher Education Publications, Guangdong, 1984. Published in Chinese. There are no headings in the original, and they are provided here for easier reading.)

(Editorial Note: Five-Animal Play was invented by the great Chinese doctor, Hua Tuo, in the 3rd century. It was reputed that Hua Tuo imitated the movements of the bird, the deer, the monkey, the tiger and the bear to formulate this important style of qigong. But recent archaeological evidence suggested that it could be the other way round, that Huo Tuo taught his patients qigong techniques to help them recover, and the patients manifested external movements which could be represented by these five animals.)

Practitioners go through 10 stages of intention and focusing on various energy points to generate movement to enable the muscles of the whole body to be relaxed to enter silence, to enable the brain to have a special function of protection for control.


Movements of the Five Animals

The self-hitting of the body, massaging, dotting energy points, movements of the five animals as well as the circulation of internal energy during qigong training enable tendons and muscles, as well as essence, energy and spirit to have practice and activation. The five storage organs and the six transformational organs as well as the electricity of life in all the related meridians receive harmonization and balance.

(Editorial Note: Essence, energy and spirit, “jing”, “qi” and “shen” in Chinese, are the three essential elements that form a person. “Jing” or “essence” refers to the finest substance of the body. In scientific terms, it is the sub-atomic particles that constitute the physical body.)

(Editorial Note: The five storage organs in traditional Chinese medical philosophy are heart, liver, spleen, lungs and kidneys. The six transformational organs are intestines, gall bladder, stomach, colon, urinary bladder., and triple-warmer. The triple-warmer is a large internal organ consisting of three bodily cavities. The upper warmer is from the throat to the chest, the middle warmer from the chest to the abdomen, and the lower warmer from the abdomen to the anus.)

Thus all these have self-curing functions against illness. This is in line with what Hua Tuo said, “movement enables the digestion of grain energy, smooth flow of blood in vessels, so illness cannot occur. Movement of the joints prevents aging.“

It is also in line with the modern scientific concept of “life is manifested in movement”. Interestingly it is the reverse of “to have big movement, it is better to have small movement. To have small movement, it is better to have no movement.” It is because of self-manifested movement, the innate ability of the body can cure and regenerate itself to maintain a state of “life activities in balance” can happen.

During the practice of Five-Animal Play, when practitioners have entered silence to a certain extent, they can attain “extreme silence generates movement”.

(Editorial Note: It is not necessary to sit in a lotus or cross-legged position to enter silence, which is often called “meditation” in Western culture. Here, meditation refers to “mind training” or “spiritual cultivation”, and can be performed in four main posture: standing, sitting, lying down and moving. In Five-Animal Play, “meditation”, which is mind training or spiritual cultivation, is usually performed in moving posture.)

This external movement of qigong can enable energy and blood to flow harmoniously in the meridians, and activate the energy in the five storage organs and six transformational organs.

As energy is activated in the five storage organs and six transformational organs, due to their innate characteristics, the energy in the various organs will manifest movements related to their respective organs that result in Five-Animal Play, and practitioners may also express out the sounds of the respective animals.

(Editorial Note: The five storage organs are related to the six transformational organs as follows. The heart is related to the intestines, the liver to the gall bladder, the spleen to the stomach, the lungs to the colon, and the kidneys to the urinary bladder. The pericardium, i.e. the outward covering of the heart, is related to the triple-warmer. Pericardium energy and triple-warmer energy function like heart energy.)

The external movements symbolized by the various five animals correspond with what is said in the study of acupuncture, which is “Wherever the meridian is, the disease is located” in principles and nature.

(Editorial Note: Hence, by observing how a patient moves in his Five-Animal Play, an experienced qigong master can have an idea what illness the patient suffers from. More importantly, the patient can overcome his illness by performing the relevant animal play. For example, if a patient suffers from a heart problem, which includes an emotional, mental or spiritual problem because in classical Chinese, the “heart” refers to the emotional, mental and spiritual dimensions of a person, he can overcome his problem by performing the bird play.)

According to the illness a patient is suffering from, or it may be an illness he may not even realize he is suffering from, the patient may spontaneously hit, massage or press on the relevant meridians or energy points during his practice of Five-Animal Play.

For example, a patient suffering from a stomach disorder, irrespective of whether he knows where meridians and energy points are, during the practice of Five-Animal Play, he will spontaneously hit or massage his Leg Bright Yang Stomach Meridian, or other meridians and energy points related to this meridian in terms of mutual creativity or mutual destructivity, or in terms of shallow-deep relationship, like Leg Major Yin Spleen Meridian, or Leg Medial Yin Liver Meridian,

The patient may also dot the relevant energy points that can overcome his stomach problem, like “zu san li”, “liang qiu”, “nei quan”, “bei hui” and ”zong yuan”. All these actions are spontaneously manifested by the patient himself because of the disordered energy of his illness.

When practitioners have accomplished a certain level of attainment in their training of Five-Animal Play, they may experience their internal energy circulating through their various meridians. Some patients may have the reaction of “energy rushing at the oven”. Eventually the energy flow will expel the oven of illness, and the patients will have complete recovery.

(Editorial Note: “Energy rushing at the oven” is a qigong term meaning vital energy going to the site or cause of illness to expel the illness. When this happens, patients often feel as if their illness has become worse. The apparently worsening effect is due to vital energy digging out the root of the illness. Those ignorant of this philosophy may stop practicing their qigong, which is a great pity, as their qigong training is actually helping them on the way to complete recovery.)

Also those patients who have problems at their waist, after practicing Five-Animal Play for some time, may feel energy rushing at their waist. This may be very painful. If they continue to train, they will find the pain disappear. They will also recover from their waist problems. Other patients with other diseases may have similar reactions.

Advanced practitioners who have trained Five-Animal Play for a long time, may spontaneously break through the “Small Universe” and the “Big Universe”, enabling their vital energy to flow harmoniously throughout their body without hindrance. They accomplish what is known in qigong as “When the ren mai and the du mai are cleared, all illness will disappear.”

(Editorial Note: The “ren mai,” or the conceptual meridian, flows from the lower lip down the front part of the body to the anus. The “du mai”, or the governing meridian, flows from the anus up the spine at the back of the body to the top of the head, then down the front of the face to the upper lip. When vital energy flows harmoniously through the conceptual meridian and the governing meridian, practitioners attain what is known as the Small Universe.)

(Editorial Note: In qigong philosophy, there is a saying that, “Breaking through the Small Universe, all illness is eliminated. Breathing through the Big Universe, a practitioner lives beyond a hundred years.”)

(Editorial Note: There are two types of Big Universe. For convenience, one type is called the Medical Big Universe, or the Phenomenal Big Universe. It is accomplished when vital energy flows through all the 12 primary meridians, which are 3 hand yin meridians, 3 hand yang meridians, 3 leg yin meridians and 3 leg yang meridians. These 12 primary meridians flow through all the five storage organs of the heart, liver, spleen, lungs, and kidneys, as well as the pericardium, and all the six transformational organs of the intestines, gall bladder, stomach, colon, urinary bladder and the triple-warmer. The saying above refers to the Phenomenal Big Universe. The other type is the Spiritual Big Universe or the Transcendental Big Universe. It is employed by spiritual cultivator to merge with the Cosmos. Here the personal energy of the cultivator merges with the universal energy of the infinite Cosmos.)

In qigong training, irrespective of whether it is external or internal, practitioners are mentally alert, and are aware of their environment. Their experience is real, not illusory. It is also not a deviation. It is likely the result of life electricity flowing through all the meridians. In traditional terms, it is the result of vital energy flowing though all the meridians, harmonizing energy and blood. In modern medical terms, it is self-induced life therapy. It is more suitable and more effective than electro waves emitted by machines or external energy emitted by qigong masters on patients.

From entering silence to manifesting external movements is a major feature of Five-Animal Play. It is a sign that the practice is successful.

In the past there were practitioners who experienced external movement while training an internal art. Because they could not control their external movement or did not know how to complete their practice session, not only they did not benefit from their training, they might experience deviation known in the past as “escape of fire and entry of monsters”.

They mistook external movement as deviation or illness, thus affecting the development of external movement in qigong training. Actually if they could control their external movement well, and know how to complete their session, not only they would not experience any “deviation”, but also they would have more benefits like overcoming illness and strengthening themselves, besides the benefits their internal art would provide. 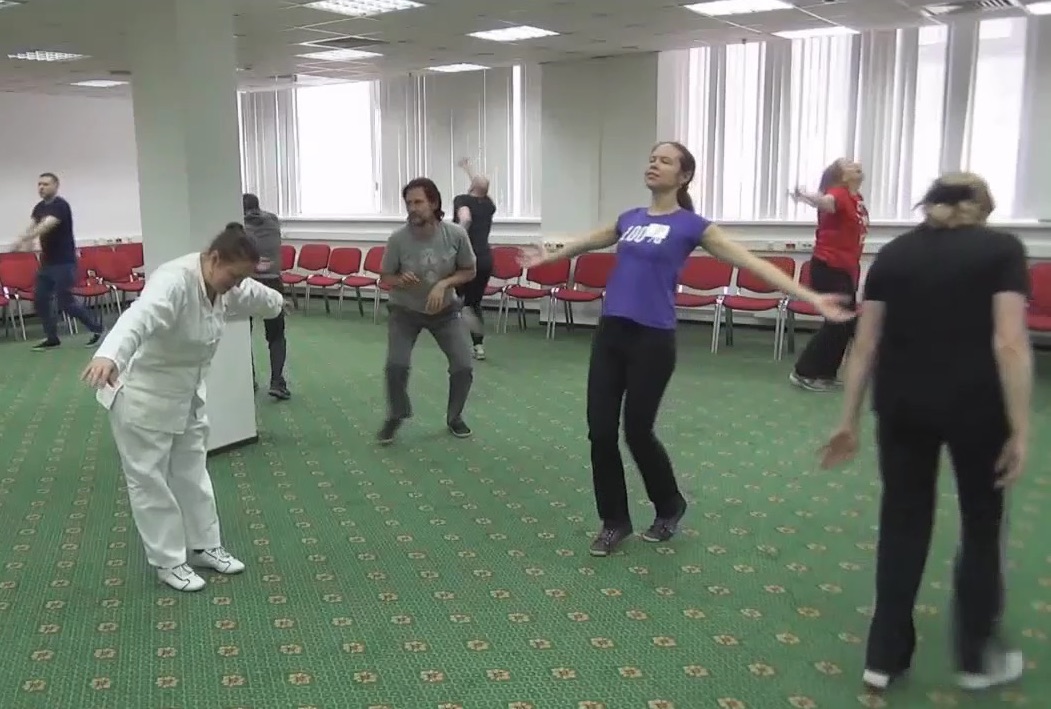 Qi flow, which is a modern name for Five-Animal Play