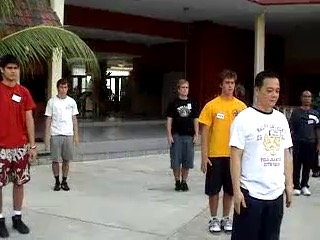 An Intensive Qigong Course in 2006. You can see Dr Foong in the foreground.

Initially I used the term "qigong", which is in Romanized Chinese, but my editor for the "Art of Chi Kung" suggested that I used the term "chi kung", which is the usual English spelling and is of the same pronunciation, for the ease of readers. Except for some chapters, there are no illustrations in the manuscript, but some illustrations from Shaolin Wahnam are added.

Although I may not agree with some of the chapters, they constitute the philosophy of our Shaolin Wahnam chi kung.

The following are the titles of the book in 22 chapters.