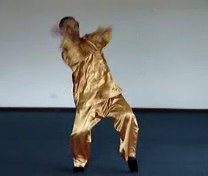 The movements and spirit of Shaolin Kungfu are characterized by five “animals”, namely the Dragon, the Snake, the Tiger, the Leopard and the Crane.

This video clip captures an impromptu demonstration of the Shaolin Five-Animal Set by Grandmaster Wong Kiew Kit in response to popular requests by participants of a VIP Taijiquan class in September 2005.

Pattern Names of the Set
Shaolin Five-Animal Set in 2000