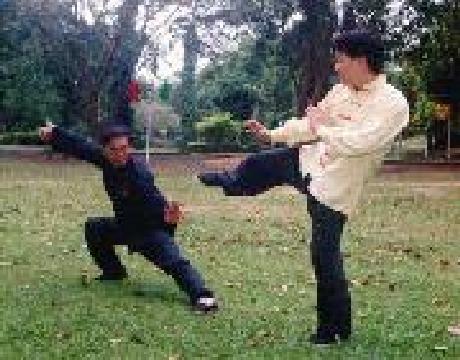 “Looking back at the many sparring sessions and a few real fights in my younger days, I would say that the most crucial factor enabling me to come out of combat unhurt was my stances!” -- Sifu Wong.

We have all heard Sifu talk about the importance of the stances. Many of us know -- from direct (and sometimes grueling) experience -- that he heavily emphasizes stances in his teaching. Many of us have also heard the saying:

“If you have powerful arms and solid stances, unless your opponent is a master, you have already won three-tenths of the battle before it even begins.”

Anyone who has sparred with Sifu will have no trouble understanding how a solid stance can bring tremendous advantages in combat. You know how terrifying it is to be completely uprooted by a simple Single Tiger. But there is more to the stances than just being solid.

In Shaolin Kungfu, the stances must be alive . This is what I mean by Top Yang Bottom Yin. These stances are not just stable -- they are agile! Many people see deep stances as a hinderance to agility and speed. The opposite is true.

Let's compare the two pictures below to a similar situation in Western Boxing.

Many people assume that the Boxer has the advantage of speed because of his agile footwork. It's true that boxers are fast, but there are many disadvantages to their footwork. For starters, it is tactically slower. In the above example, I can swerve away from the attack without moving my feet and swerve back to deliver a strike long before a boxer could bounce away and bounce back.

What about Boxers who slip under or around punches? This is a faster tactic, but because of the Boxing stance, it leaves them vulnerable to other attacks. In order to slip a punch in Boxing, you must crouch down or lean to the side, thereby exposing the back of your head as well as your legs to attacks (both illegal moves in Boxing). You are also vulnerable to grappling (also illegal in Boxing).

In order to compensate for the weakness in their stance, boxers usually cover their head (hands up near their ears) while slipping punches. That may protect them from fists covered with large gloves, but it will not protect them from the subtle and fast attacks of a Snake Fist or a Tiger Claw -- both of which are possible only with when using Top Yang Bottom Yin.

In Shaolin stances -- precisely because the stances are deep and solid -- we can move the upper body in many ways, and we can do it without exposing ourselves. Thus, we can have agility not only in the way we step, but also an entirely different kind of agility from the waist up (Top Yang). Think of a snake coiled and ready to strike. The bottom, coiled half hardly moves (Bottom Yin), but the top half is still incredibly agile (Top Yang).

The combination of a rooted stance, waist power, various hand forms, and internal force makes it possible to deliver devastating strikes from many angles without even moving the feet. That is the beauty of Top Yang Bottom Yin -- it maximizes the advantages while minimizing the disadvantages (discussed above). Thanks to Top Yang Bottom Yin, we can be more agile than a Boxer, and we can do it without making ourselves vulnerable to potentially deadly counter attacks.

Another disadvantage of the Boxing stance is that bouncing makes your Qi float, thereby making it difficult to differentiate between real and feigned attacks, especially when you add kicks and grappling into the mix. It is impossible to maintain the Six Harmonies while bouncing around. But with Shaolin stances, you can be calm and alert while simultaneously being agile and powerful. This is another aspect of Top Yang Bottom Yin -- the mind (shen) is fresh up top while the Qi is rooted below.

Sparring against Magicians and Snakes

I remember listening to Ronan talk about his first experience sparring Sifu using Boxing (which he trained from a young age). He said it felt like sparring a magician who could teleport from here to there. Every time Ronan felt like he was about to land a punch, Sifu would be just out of reach. Then Sifu would be on top of him in a flash -- faster than any boxer Ronan had ever seen. Ronan said he felt that Sifu could hit him any time he wanted whereas he was only able to hit air.

I had a similar experience when I first sparred Sifu. Although I didn't used Boxing (it was Karate for me back then), I felt that there was something odd about the way he moved. At one point, I really felt like I was fighting a snake. I thought I had him with a chop to his neck, but I only hit air. Just as I expected to hit, I found him coiling back with a Snake Fist slicing across my eyebrows -- a technique the likes of which I had never even imagined in Karate.

Sifu was able to do these things because of the principle of Top Yang Bottom Yin.

The following discussion is reproduced from the thread The Tactical Retreat of Shaolin Kungfu posted by Sifu Anthony Korahais in the Shaolin Wahnam Discussion Forum on 24th December 2004.