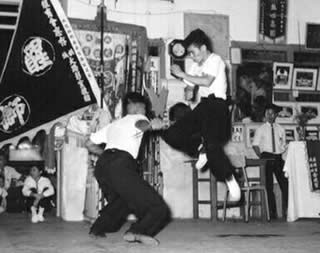 This is a priceless photograph taken almost half a century ago showing Sigung Lai Chin Wah teaching Sifu Wong how to counter an opponent holding daggers. Almost a century ago when societies were quite lawless, Sigung Lai Chin Wah was a great fighter often righting wrongs, for which he was given an honorific nickname “Uncle Righteousness”. Today, although we in Shaolin Wahnam abhor fighting, we are still trained in the tradition for serious combat.

The following discussion by Jeffrey Segal is reproduced from the thread Breathing Methods and Control in Taijiquan in the Shaolin Wahnam Discussion Forum on 7th January 2005.

"I've been wondering as I read your posts if you have had any 'real' fighting experience such as Lei-Tai full contact kickboxing in the ring or as a combat soldier in military service, or even serious street fighting experience?" Sifu Stier.

I am lucky enough to be able to say that I have not been involved in life or death fighting situations so I honestly cannot say from personal experience whether the techniques and tactics that I describe here work in such situations. I do, however believe absolutely that this is the case. Why?

Sifu told me that practicing genuine Qigong would give me radiant health, joyful vitality, a zest for life and spiritual joy. My life is wonderful, I feel connected to the cosmos, my health is indeed radiant and my spiritual progress was confirmed recently when I visited Master Yap (a truly magnificent Qigong Master) in Penang last December.

Sifu told me that by doing my stance training regularly and correctly I would develop internal force. While my internal force is nothing (I repeat nothing) in comparison with some of my seniors like Kai, Chun Nga and Mogan, it is sufficient that my Shaolinquan brothers notice it when they spar with me.

Sifu told me that by training Dantian Breathing as he taught it, I would be able to tap cosmic energy and store it at my Dantian or radiate it throughout (and beyond) my body. I can do this easily.

Sifu told me that I would be able to open people's energy points and smooth their energy blockages and if needed, transmit some qi to help the process. Although I am still quite new to this and my skills are in a stage of infancy, I can readily accomplish these things.

This list is my no means exhaustive and I am not trying to brag. My purpose here is to say that I have every reason, based on my personal experiences, to believe my Sifu. I have not been involved in real fighting but my beloved Sifu and two of my beloved Sigungs, Sigung Ho and Sigung Lai as well as my Sihings like Kai and Anthony (both of whom I have been lucky enough to train with and learn from) most certainly have. Some of my Wahnam brothers in England like Ronan also have (probably more extensive than they would have preferred) real fighting experience. This forum and the Sifu's website are replete with accounts of their exploits.

I would not call mine life-death combats, but in my younger days I was caught in numerous fights, including attacks by many people at the same time.

My sifu, Sifu Ho Fatt Nam, was once attacked by more than 30 people armed with deadly weapons like axes and spears out to kill him.

Not too long ago, Kai, my senior disciple, was attacked by seven people using weapons, including one with a gun. Within five seconds, all seven were on the ground, four with broken bones.

True to our Shaolin teaching, Kai was compassionate, he just broke their bones. In such a situation, breaking their bones was the minimum needed to stop armed attackers killing you.

These were true cases. We at Shaolin Wahnam never glorify fighting, but these cases enable us to speak with conviction when we say kungfu (without resorting to bouncing about and kicking wildly) is effective for combat.

I would like to invite our members to contribute to this thread from their own experiences and I express my thanks to all those who have contributed up till now. 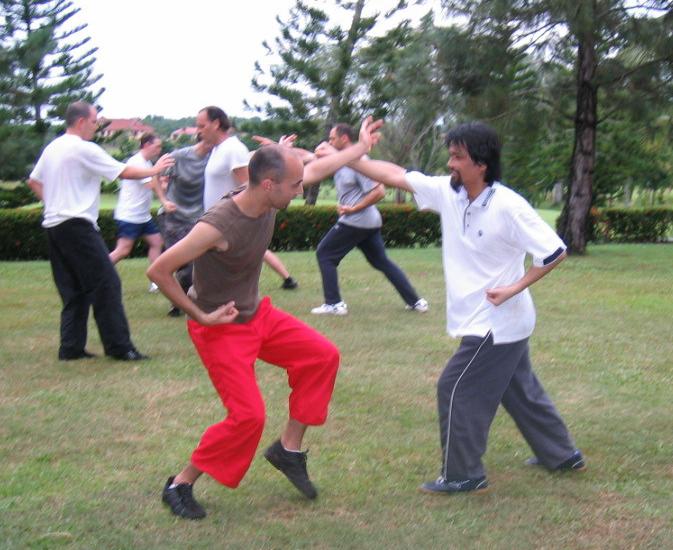 Hubert (left) sparring with Dr Damian during the Intensive Shaolin Kungfu Course in Malaysia in November 2004. Hubert could spar for hours without feeling tired because of the breathing secrets Jeffrey so kindly shared in these posts.

"Perhaps Sifu doesn't usually analyze the breathing structures to course participants as I have done here. This is because it is part of Sifu's methodology to allow students to experience them first and explain the underlying philosophy after they have direct experience."

I'm still in the process of discovering how breathing (and more importantly energy -- actually most importantly mind!) can enable us to have more energy after training. Until recently I thought I didn't quite get it, but now I realize I have been taught it without really noticing!

Well, first of all there is no way I could have sparred intensively up to 10 hours a day for 5 days without this skill.

Secondly, I now realize it is appearing more and more in my daily practice.

Let's take for example the "Lohan Asks the Way" set:

I am at a stage where I start to get comfortable with the form, and don't have to think too much to perform the set. Also, my breath has become longer, thanks to stance training. As a result I can start to focus on reducing the number of in-breaths.

When working on that, consciously or not, I am facing the following problem: What do I do between each in-breath?

Although I never really intellectually asked those questions, it aose naturally while training. I am sure Sifu mentioned many things about this in the course, but I must admit I was probably completely fried at that time

Or maybe, as is often the case with Sifu, I learnt it without noticing (and it will surface when needed). I trust that a diligent practice will naturally improve this skill.

Having realized this, let's see if I can now relate Jeffrey's comment a bit better:

"A breath does not necessarily consist of just one in-breath and one out-breath." Jeffrey.

Following on the "Lohan Asks the Way" example, let's take the first 5 patterns. At the basic level, we have one breath per pattern. Would the following be correct?

(in)
Black Tiger (out)
(in) Single Ttiger
Poisonous Snake (out)
(in) Golden Dragon
PreciousDduck (out)
(in) ?

Actually it's one breath every other pattern, but somehow it seems more natural, rather than (in) (out) all the time.

Then, as we progress to just one breath for those 5 patterns, is the following correct?

I am not sure if my understanding of "follow" and "swallow" are correct, so it's just my guess, based on my current practice.

I forgot to mention that I was talking about Shaolinquan, but as this thread is relevant to all (genuine) Kung Fu, it should be appropriate.

"Then, as we progress to just one breath for those 5 patterns, is the following correct?
(in)
Black Tiger (out)
Single Tiger (follow)
Poisonous Snake (out)
Golden Dragon (follow)
Precious Duck (out)
(swallow)
(in) ..."

Close. According to Jeffrey's excellent explanation, it should be:

Breathe in during the poise pattern (Lohan Asks the Way), then let the breath "follow" out through your mouth gently as you continue with Black Tiger, Single Tiger, Poison Snake, and however many you can link together. Depending on your breath/energy control, you may be able to do it for 3-4 patterns, or for all eight in the sequence. Later, you can practice "following" for 2 sequences (16 patterns).

The last pattern is the "out" breath. In Shaolinquan, we use the "hite!" sound for this. I'll let Jeffrey explain the Taijiquan version since he does it so well. In any case, after the "out" breath, you should still have 30% of your breath/energy left. Swallow your saliva and sink that 30% to Dantian. Now you are ready for another breathing sequence.

I would like to point out that I just openly shared a Shaolin secret. It's OK. We've got plenty to share.

Many thanks for this unpayable insight

"I would like to point out that I just openly shared a Shaolin secret. It's OK. We've got plenty to share."

I am aware of this fact! Many thanks again!

I got one question about the swallowing: Is the swallowing done at the same time as you breathe out with a her-it, or is it with the her-it first followed by the swallow. Sorry to ask that but I have heard both versions. What's your advice?

Maybe we should start a new thread with breathing structures in Shaolin Gong Fu....but as Hubert said: it's relevant for all genuine Shaolin Arts.

First breathe "out" with the "her-it!," then swallow. Maybe later I will create a Shaolinquan Breathing thread. For now, I'm enjoying learning from Jeffrey.

I didn't realize the sound (and "out") was only on the last pattern. But thinking about it, I think that's what I was doing, without being aware (i.e I would stress the last pattern of the series a bit more). But I was probably not "following" correctly for the previous patterns.

I have learnt a lot with this thread! Thank you, Jeffrey, for starting it.

I'm off to practice!