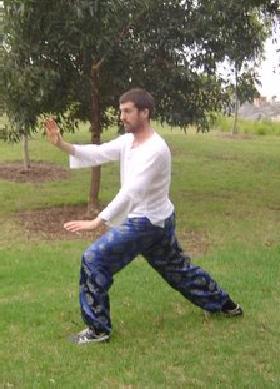 The following discussion by Jeffrey Segal is reproduced from the thread Breathing Methods and Control in Taijiquan in the Shaolin Wahnam Discussion Forum on 5th January 2005..

Here is the sequence of patterns that I'll be using for my example:

Let's first of all suppose that my opponent attacks me with a right thrust punch. As the punch approaches I shift my body backward without moving my legs and, simultaneously brushing off his punch with my left hand, strike his chest with my right palm. (Green Dragon)

My opponent, warding off my palm strike with his left hand, counter-attacks with another thrust punch. Brushing aside his right punch with my left hand, I instantaneously attack his throat with the fingertips of my right hand (White Snake Shoots Venom)

Now, well trained as he is, my opponent shifts his head to dodge my white snake (perhaps deflecting my snake with his left hand) and strikes my head with a right palm chop. Moving diagonally forward to my right side, I deflect his right palm chop with my left hand, and kick his Dantian with my left thrust kick. (Cross Hands-Thrust Kick)

In this short attacking sequence, I use three patterns that constitute three consecutive strikes. While doing this I don't neglect my defense, indeed my defense is incorporated in my attack and there is no need to use separate defensive patterns before I counter attack.

A suitable breathing structure to accompany these three consecutive strikes for this combat situation would be “in-out-in-out-out-swallow” All three strikes are executed in one breath. The Chinese saying for this tactical approach, which is very important both in solo set performance as well as in sparring, is “yi qi ke cheng” meaning “accomplished in one breath”. 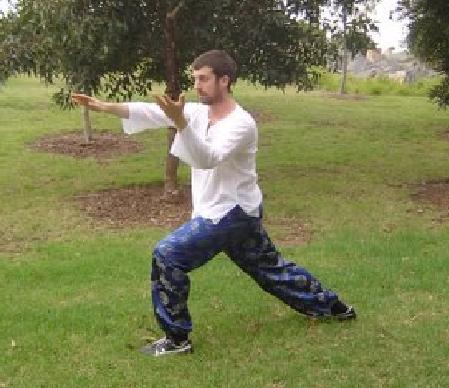 This time, my opponent attacks me using a side kick. Without moving my feet, I slant my body backward, avoiding his kick and as soon as it is spent, but before he pulls his leg back, I brush it aside and instantaneously strike his chest, ribs, back or whichever part of his body is exposed with my right palm. (Green Dragon)

A well-trained opponent may pull back he leg or jump back, warding off or dodging my palm strike. As soon as he makes his defensive move, I close in and, brushing aside his defensive hand if necessary, simultaneously strike his throat. (White Snake Shoots Venom)

Irrespective of whether my opponent defends against my second strike and almost irrespective of his defense, I swiftly move diagonally forward and kick his Dantian with my left thrust kick. (Cross Hands-Thrust Kick)

For this combat situation, a good breathing structure, using the same three consecutive strikes as in the previous post, would be “follow-(follow)-explode-swallow” Again the three strikes are performed in one breath but this one breath is much shorter than the breath in the first example. I have placed the second “follow” in brackets because there aren't two separate “follows”. Rather, one “follows” the breath continuously while performing Green Dragon and White Snake.

Modifications and variations notwithstanding, if you can understand the underlying principle involved in executing three strikes, you can understand how one can execute ten consecutive strikes (as Wuji asked earlier on in this thread). Through systematic training it becomes natural to use the correct breathing technique or structure as required. I'm looking forward to discussing this process as our thread on breathing and control in Taijiquan progresses.

Those students who have learnt Shaolinquan and/or Taijiquan from Sifu will recognize that there are many different tactics to be found in my descriptions of such seemingly simple combat sequences. 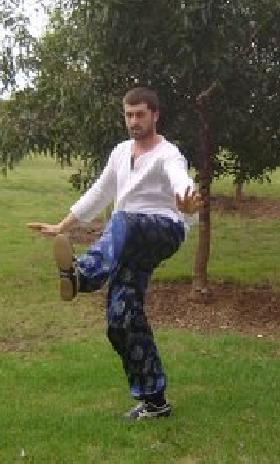 Comments from other members of the discussion forum

I've been wondering as I read your posts if you have had any real fighting experience such as Lei-Tai full contact kickboxing in the ring or as a combat soldier in military service, or even serious street fighting experience? I ask this because the all too obvious experience of those who have had such experience is that REAL FIGHTING HAPPENS FASTER THAN THOUGHT! The action/interaction circumstances of real fighting situations don't normally allow one the luxury of sufficient time to plan strategy or form a “game plan” before engaging the enemy, or enough time to identify an opponent's attacking movements or techniques and select an appropriate defensive response and their accompanying breathing patterns.

And so, as interesting as your intellectual exercises in hypothetical fighting scenarios are, they nevertheless represent an ideal situation in which theoretical possibilities always play out perfectly as expected and planned. What do you do as part of your normal training regime to insure that your techniques and especially your breathing synchronization would realistically occur as projected in your hypothetical scenarios even if you knew in advance that you were going to be forced into an unavoidable fight, e.g. the combat soldier, or a pre-planned, voluntarily chosen full-contact fight in the ring, but especially in the event of an ambush fight in which you are attacked with tremendous sudden speed and forcefulness at arm's length distance from a hidden position? These are all potential scenarios in which the real fighting will happen faster than you can think. Please answer from your own direct, personal experience in these types of fighting situations. Thank you!

From what you have written you imply that all breathing patterns and structures are thrown to the wind in a real fighting situation. Is this your personal experience? If so, are stances and techniques also discarded in such a situation?

If the answer to both of my questions is no, then I would have to ask you to explain what you meant with your previous post.

I am also still anxiously waiting to hear about breathing methods and control you employ in your Taijiquan training. Your general descriptions of breathing methods previously posted are most interesting but I would still like to see something specifically relevant to the main theme of this thread.

Your comments surprise me. I wonder whether you have spent much time browsing Sifu Wong's website. I also wonder if you are aware that one of the main reasons that Sifu decided to teach Taijiquan was his dismay as he observed that not only are there increasingly few people who can use their Taijiquan forms for fighting but there are less and less people who even believe that Taijiquan is an effective combat art.

I think that we need to be clear on something.

Have you, Sifu Stier have you ever used your Taijiquan forms effectively for real fighting or free sparring?

If you prefer not to answer this question, I hope you will answer the following one.

Do you, Sifu Stier, honestly believe that Taijiquan can be effectively used for fighting?

I ask these questions based on the premise that Taijiquan is an internal martial art, which means it can be effectively used for fighting.

It is true that not many Taijiquan practitioners may be lucky enough to progress to the levels of tactics and strategies, but using Taijiquan techniques for effective combat is basic to Taijiquan training as an internal martial art. To use Taijiquan techniques effectively for combat requires you to clearly identify your opponent's attacks and respond accordingly. Otherwise you will be fighting like children.

Perhaps what you meant to say is that in real fighting there is no time to think.

Sparring and real fighting are not the place for an effective combatant to think of what techniques, tactics and strategies to use. This is a big mistake many people make. Hence they fight or spar haphazardly.

An effective combatant just applies the appropriate techniques (including their accompanying breathing structures), tactics and strategies spontaneously and correctly. How could the techniques, tactics and strategies be correct if he does not think during fighting. This is where systematic combat training comes in. Some of the thinking is done during combat training, and most of the thinking was done by past masters who passed down the legacy to us. 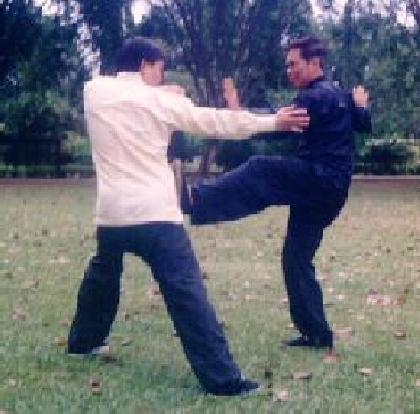 The techniques that I have talked about are meant to be an introduction to breathing structures and it is only through systematic training (please read Anthony's superb article on Sparring methodology at http://www.shaolin.org/discussion/sparring.html that it is possible to apply them in sparring and fighting.

Taking an example from the techniques I have described during this thread, by practicing responding to a punch or a kick using “Green Dragon Shoots Pearl” hundreds of times in training, I am able to apply this technique in free sparring. The reason I practice this particular response is that the form itself comes from the real fighting experiences of Taijiquan masters through the ages.

Originally posted by Sifu Stier:
"And so, as interesting as your intellectual exercises in hypothetical fighting scenarios are, they nevertheless represent an ideal situation in which theoretical possibilities always play out perfectly as expected and planned."

The techniques that I am presenting here are not advanced. They are basic in our Shaolin Kungfu and Wahnam Taijiquan training. Those who attend either the Intensive Shaolin Kungfu Course or the Intensive Taijiquan Course given by Sifu are taught these skills and techniques. Perhaps Sifu doesn't usually analyze the breathing structures to course participants as I have done here. This is because it is part of Sifu's methodology to allow students to experience them first and explain the underlying philosophy after they have direct experience.