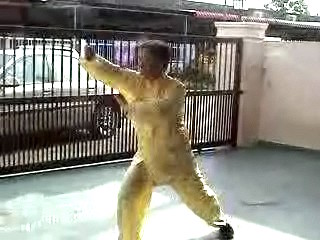 The pattern called “Yellow Bee Sucks Pollens”, which is also the name of this set

Realizing Taijiquan as a Martial Art

Many Taiji practitioners today do not realize that Taijiquan is a martial art. In fact, the term “quan” is a shortened form of “quan-fa” which means “kungfu” or “martial art” Hence “Taijiquan” means “Taiji Kungfu” or “Taiji Martial Art”.

We conducted a regional Taijiquan course in Andorra in August 2006, and another one on the Blue Mountain in Costa Rica in January 2007 to address this topic. It is heartening that all course participants, including some fresh beginners, could apply Taijiquan in free sparring after a few days of the courses.

Some people may complain that our Wahnam Taijiquan as shown in “Yellow Bee Sucks Pollens” looks like Shaolin Kungfu and not like “Taijiquan”. That is their opinion and we don't have to bother ourselves with it. They are often the same people who perform Taijiquan slowly like a dance. But for our own students, it is good to know that classical records in writings and in pictures show Taijiquan like Shaolin Kungfu in both solo practice and in combat.

Those who have attended intensive Taijiquan or Shaolin Kungfu courses should have no problem learning “Yellow Bee Sucks Pollens” or “Single Tiger Emerges from Cave” and their respective combat applications from the videos provided.

“Yellow Bee Sucks Pollens” overcomes a slight setback in the twelve basic combat sequences taught at intensive Taijiquan courses. Can you tell what this slight setback is?

There isn't a side attack and its counter in the twelve basic sequences. This does not mean that course participants of intensive Taijiquan courses would be unable to execute or counter side attacks, but it is an improvement in our sparring methodology to formally add them in. The side attack is found in the pattern “Yellow Bee Sucks Pollens”, and its counter in “Punch Below Sleeves”.