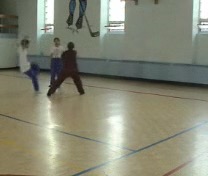 This video captures a rare occasion in 2004 when Sifu Wong demonstrated an application of internal force in the pattern “Dragon Manifests Marvelous Power” found in the Shaolin Dragon Form Set. Michael was thrown many feet backward by a shake of Sifu Wong's body. Notice that Emiko expressed amazement at the "throw". The action was at a corner of the video footage because the video was taken impromptu with the video camera running automatically. At the end of the video clip Sifu Wong asked Michael to perform "Lifting the Sky" as a preventive measure to clear any possible injury that might have occurred.

In a post in the Shaolin Wahnam Discussion Forum, Michael said, "The chi flow and internal force is very important to the Dragon Form. Sifu has mentioned that a master of the Dragon Force may be able to injure an opponent with any part of his/her body and I've had first hand experience of this. At the Toronto Shaolin Kungfu Course in April 2004, Sifu was demonstrating the application of 'Dragon Expresses Marvelous Powers' (a very apropos name!). Sifu told me to grab onto him tightly and I did so. When Sifu applied this technique, I felt his internal force coming from all parts of his body! It felt like a pulse or wave of energy rushing from his body and striking mine. As a result, I landed several feet away from him."