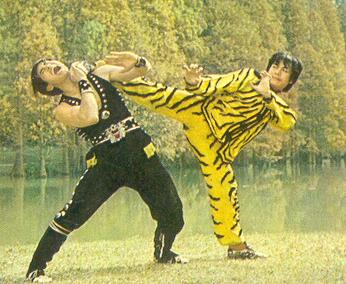 What is taught in China today is modern wushu and not traditional kungfu. Modern wushu is a magnificent demonstrative art, but is not meant for real combat and there is no internal force training. The way the wushu exponent kicks as shown above, for example, is dangerously exposing himself, a situation a traditional kungfu exponent would ardently guarded against.

Are there any Shaolin Monasteries that offer entrance for non-Chinese students? I would like to live in a monastery and I do not know who to talk to

The Shaolin Monastery in China today is a very important tourist centre, and I believe there would neither be space nor time for students, Chinese or non-Chinese, to study there. Moreover, traditional Shaolin Kungfu is no longer taught in the Shaolin Monastery today. It is also not generally taught elsewhere in modern China, though you may find some traditional Shaolin and other kungfu masters in some remote places.

In view of so many people asking me information about learning traditional kungfu, Shaolin and otherwise, in China, it is pertinent to know that because of various reasons traditional kungfu is an exception not the norm in China today.

What is generally taught in China today is modern wushu, which is different from traditional kungfu. The mis-information about martial art in China is made more confusing by the fact that in the Chinese language, kungfu is called “wushu”, but it is practiced not as a martial art but as a demonstrative sport. Neither combat application nor internal force training, which are two essential aspects of great kungfu like Shaolin and Taijiquan, are not practiced in modern wushu.

I have been using your Taijiquan webpage for help as well as inspiration through my practice. I would like to say thank you for sharing your wealth of knowledge via the internet.

I have view several demonstration videos from different masters. To me it seems that the spines of these masters aren't perpendicular with the ground but rather bending in slightly toward the bottom of the spine near the buttocks.

Your observation is correct. The spines of Taijiquan as well as other kungfu masters are not really perpendicular, because the spine by nature is a beautiful slight curve. When one says that the spine is perpendicular, the word “perpendicular” is used figuratively; it means the person is standing upright.

Moreover, even given allowance for the slight curvature of the body and the spine, a master's body may not be perpendicular to the floor. In many patterns, like those involving the Four-Six Stance and the False Leg Stance such as “Playing the Lute” and “Needle at Sea Bottom”, the body is bent slight forward. This is preferred because the body weight at these stances is not evenly distributed between the two legs, and if the body is perpendicular it would place too much stress on the back leg. Leaning slightly forward compensates for the uneven weight distribution over the legs.

Regardless of whether the body is slightly bending or perpendicular, it is important that the body is naturally “straight” and not bent crooked. If one slumps or humps, it will cause muscular tension and energy blockage, resulting in both physical and emotional poor health.

I have a herniated disk in my lower back. Often my lower back is tight and wants to bend in rather than be erect. I practice Taiji with an erect spine. However I have to use muscular force in order to keep it that way and this blocks chi flow. Any thought or comments?

One's back should not only be erect but also relaxed. If you have to choose, being relaxed is more important than being erect. Due to certain conditions you may bend your body slightly so as to be relaxed, rather than tense your body to be erect. Indeed, the purpose of being erect is to enable you to be relaxed.

It may be a surprise to some people, but a herniated disk can be overcome quite easily with chi flow as a result of chi kung practice. An excellent chi kung exercise for this purpose is Self-Manifested Chi Movement, but it should be learnt from a competent instructor. Incorrect practice may cause harmful side effects.

Another excellent exercise is “Carrying the Moon, which you may learn from my books, but of course you will get much better result if you learn it from a competent instructor.

If you practice Taijiquan as an internal martial art, and not just as external forms, you may be able to generate a chi flow that can overcome your herniated disk. Perhaps you may consider attending my Intensive Taijiquan Course in Malaysia where these and other skills are learnt. I shall conduct such a course from 20th to 26th January 2005. Please see /general/tjq-course.html for details. Because my schedule is very tight, this may be the only Intensive Taijiquan Course for the year. 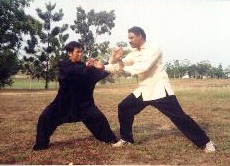 When we say that the back is straight, it does not literally mean the back is rigidly perpendicular. In the photograph showing Shaolin combat application, the backs of Sifu Wong and of Sifu Mogan are straight — not crooked or bent.

Different schools and masters have different views regarding chi kung and sex. Our philosophy is that whatever you can do before practicing chi kung, including having sex, you will be able to do better as a result of practicing chi kung. This is only logical.

Actually high level chi kung like the one we practice in Shaolin Wahnam is very effective for enhancing sex performance and enjoyment. However, we would not want to over emphasize it so as not to miss other wonderful benefits from chi kung training.

Hence, in our school of chi kung, one needs not abstain from sex for three days after having sex. He can carry on his chi kung or meditation practice as usually, with or without sex. There is also no limit to the number of times for having sex. You can enjoy sex wholesomely as often as you are capable of.

“Dan tian” means energy field. It is where chi or vital energy accumulates.

Channelling chi to your dan tian or any other part of your body is an advanced skill and should be learnt from a competent instructor. Wrong practice would result in harmful side effects.

I have been diagnosed with Charcot-Marie-Tooth Disease. It is a hereditary disease which attacks the nerve system mainly from the brain to the spinal cord, thus my lower leg, arm and hands are getting very weak. It is also sometimes referred to muscular dystrophy. I have visited two specialists but all I was told was there is no cure at this point in time.

I have also been diagnosed of having sleep apnea which I stop breathing when I am sleeping. When I do not breath, there is no oxygen going into my lungs and in the long term it can cause a heart attack. The breathing normally stopped between 10 to as long as 30 seconds. It also causes one to be very tired in the day time.

Sifu Wong, I hope you can give me some guidance as I am at a lost since medication is not a solution to my problem. I would like to seek your advice and learn from you if you feel that chi kung would help me overcome my problems.

If the diagnosis is accurate, and they succeed in restore your spleen energy flow or removing the wind in your color system, you will overcome your health problems. Chinese physicians have numerous methods to do so, like using herbs, acupuncture or massage. But if their diagnosis is inaccurate or they fail in restoring spleen energy flow or removing wind, then you will not overcome your health problems. 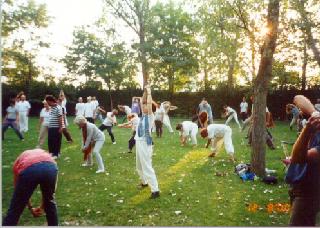 I have been practicing the “Art of Thirty Punches” from Sifu Wong's book. After punching, I went to a standing relaxed state. At the same time I heard some clicking sound in my head whenever I breathe out. Even though I felt more “alive” afterwards, I still wonder whether it was a sign of faulty practice.

The clicking sound is probably the result of chi breaking through some blockage in your head. As you are short-sighted and also as the Art of Thirty Punches works on the eyes, it is likely that chi is clearing some problems related to your short-sightedness. You will enhance the result if you open your eyes wide as if you were angry when you punch. In fact this pattern is called “Punching with Angry Eyes”.

As I am short-sighted, can I practice Counting Leaves, Rolling Eyes and Nourishing Shen through Sifu Wong's book? I fear that it is an exercise that requires a competent instructor's cautious guidance.

The exercises you have mentioned are excellent for the eyes. They have helped many people overcome short-sightedness and other eye problems.

They are actually part of a set of eye exercises called “Eight Exercises for Training the Eyes”. These eight exercises are as follows:

Contrary to what you believe, all the eight eye exercises are quite safe to be practiced on your own.

My current progress is that tears would come out of my eyes, accompanied by a sensation when I count up to about 180 leaves. Sometimes, while practicing Horse-Riding Stance or even just standing relaxed, tears would also come out with the same sensation. I would like to know if I should persist or not. If so, what would be the common results of correct and incorrect practice?

Tears coming out of your eyes as the result of one or more of the eight eye exercises, is a normal progress. It is in fact a sign that your eye exercises are having good effect on you. It is a mean for washing out the rubbish that caused blockage in your eyes.

Sometimes your eyes may feel slightly painful, which is normal. It is what we called the good pain. You should therefore carry on with the exercises. You have a good chance of regaining normal, or even better, eyesight. Congratulations.

Correct practice, naturally, will result in better eyesight. Your eyes will also sparkle and you feel fresh. On the other hand, incorrect practice results in reddish and swollen eyes.