HOW TO INITIATE AN ATTACK OR RESPOND TO IT

Moving In and Responses in Combat

How to move into an opponent as well as how to respond to an opponent's initiate move are two important aspects in combat training, but are often neglected by many martial artists. Two important principles in moving in to attack are to avoid giving “free offers” and to secure the best combat advantages. At advanced levels, you can also set the pace and nature of the combat, as well as tricking the opponent into making his first move from which you can follow up accordingly.

Some martial artists believe that the first one to attack has lost the fight. This is not necessarily true, but it shows that the responder has an advantage over the initiator as he can exploit the initial move. However, if you are skillful, you may turn the table around. Your initial move can be a feint or a “lead”.

Hence, as a responder you need to take care of this tactic of your opponent. Although many martial artists today are unaware of such tactical considerations, and this tactic is not commonly used in today's free sparring (which is mostly hitting and kicking each other), it is helpful to be aware of it at the start and to have some training in it so as to lay the foundation for advanced training in the future.

After learning the basic methods of moving in and responding in the basic combat sequences, including the use of “flowery hands” and “surprised counters”, participants to the Special Shaolin Kungfu Course in Malaysia in September 2005 learned to use various methods applying patterns from their specialized sets to move into an opponent. They also learned to respond to initial attacks in different ways.

The video clips in this series show some of these lessons as they were. They are meant to help the participants review what they have learnt as well as to provide source material for other Shaolin Wahnam members.

Attacking the Sides or Back 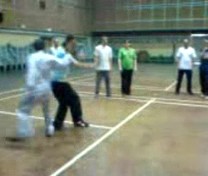 Sifu Wong shows Hubert and Jonny, assistant instructors from Shaolin Wahnam England and Scotland respectively, how to move in to attack from the sides or the back. Sifu Wong reminds them that while moving in to initiate an attack, they should always be ready for the opponent's surprised counters. At higher levels, they may tempt their opponent to counter-attack.

Different Speeds and Use of Feints

Sifu Markus Kahila of Shaolin Wahnam Finland demonstrates the use of different speeds and angles while moving in. Then Sifu Wong shows Chris of Shaolin Wahnam Scotland, who specializes in the Monkey Set, how to use feint moves to trick his opponent, arousing much laughter amongst the participants.

Moving in to Let an Opponent Initiate

Jamie, an assistant instructor of Shaolin Wahnam Scotland, shows two ways of moving in. He moves in to let the opponent hold him, and he follows up accordingly. Sifu Wong explains that this tactic is flawed as the opponent may attack in other ways apart from holding. Nevertheless, if this flaw is rectified, it can be a good tactic in moving in. His second tactic of “sounding east striking west” is effective.

Sifu Jordan Francis of Shaolin Wahnam England shows two effective ways of moving in. Sifu Wong comments that his first tactic is the reverse of what Jamie showed earlier. Jamie purposely opens himself to tempt an opponent to initiate an attack, whereas Jordan covers himself while moving in. Jordan second tactic involves the use of deception, so that the opponent does not know which hand is attacking.

Simon, Chris and Mark of Shaolin Wahnam England show some different ways of moving in. Simon uses “sounding east striking west”, scaring an opponent with a vigorous move on top but actually attacking below. Chris moves in with apparently simple moves to let an opponent respond, from which he can follow up accordingly. Then Simon moves in with seemingly simple hook punches, which camouflage subtle changes. Next Mark repeats the tactic earlier shown by Chris, moving in to force an opponent to respond, then following up accordingly.

Sifu Wong explains that one can respond to an opponent's initial attack by (1) moving backward; (2) remaining at the same spot; (3) moving forward; (4) moving to a side; 5. meeting the opponent half way.

Counter-Strike Without Moving Away

Innes and Davie from Scotland, Joshua from USA and Sifu Tim from England demonstrate a variety of responses. First, Innes and Davie show how to remain at the same spot to counter-strike an opponent when he initiates an attack. Next, Joshua demonstrates responses by moving back, moving to a side, and moving into an opponent when he attacks. Again, notice the laughter of the participants.