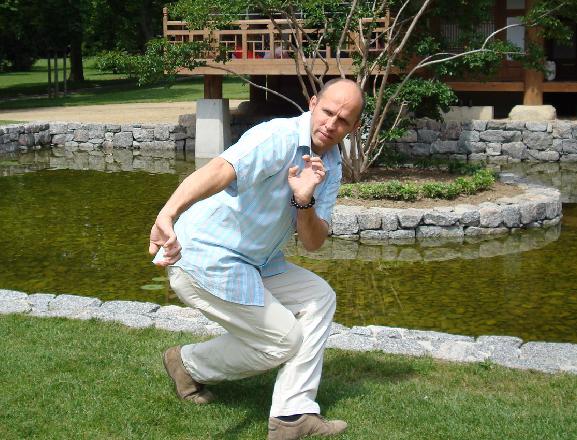 I have for many years been very interested in martial arts particularly Shaolin Kung Fu. But due to my religious beliefs when I was younger I was not allowed to take up a martial art. But after many years in this religion, I decided this was wrong and not what I wanted to do with my life, I am very keen to get started learning kung fu not for fighting but for my well being and health, and perhaps to help give me some direction in life.

You may be pleased to know that both Shaolin Kungfu and Taijiquan started as training for spiritual fulfillment. The great Bodhidharma tuaght the monks at the Shaolin Monastery the Eighteen Lohan Hands to help them attainment Enlightenment. Later Eightenn Lohan Hands developed into Shaolin Kungfu.

The great Zhang San Feng practiced Shaolin Kungfu on the Wudang Mountain to attain the Tao. His chi flow movements due to his Shaolin training were stylized into patterns which later developed into Taijiquan.

It is important to bear in mind that attaining Enlightenment and attaining the Tao are spiritual, but non-religious. They refer to the greatest spiritual attainment any beings can achieve, and can be practiced and achieved by persons of any religion or of no particular religion.

I am really looking for some advice as to where I should start, and what type of kung fu should I start.

If your main aims of practicing kungfu are for well being and health as well as directions in life, the best choice is either genuine, traditional Shaolin Kungfu or genuine, traditional Taijiquan. I would stress the two words “genuine” and “traditional”. Many people may be angry at what I have to say, but it is true that most of Shaolin Kungfu and Taijiquan practiced today is not “genuine” and “traditional”.

We may sound very boastful or egoistic, but it is true that we can use our Shaolin Kungfu and Taijiquan for combat, we develop internal force, and we have wonderful spiritual experiences. If others choose not to believe us, that is their right and privillege, and we have neither intention nor interest to convince them. But we just want to state the truth.

We are quite open in accepting willing students, provided they are deserving and follow the Ten Shaolin Law. Indeed, some of our instructors find that the easy way we accept students, and the generous manner we teach them, quite ridiculous — in a good sense. If you wish to learn from us, please refer to our List of Certified Instructors. If you wish to learn from me, please check the dates on my website for my intensive or regional courses.

Of course, you can learn from other genuine masters. But first you have to define your aims and objectives, and then search for a master who can help you realize them. Most important, you have to practice diligently according to how he asks you to practice — not according to what and how you think you should practice. 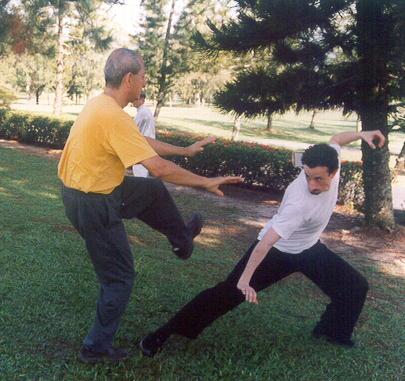 I did attend a kung fu class for 6 months but found the teacher looking more like he wanted to cause the new students pain and show off to the older students.

Your experience with the kungfu teacher is not uncommon. His attitude is not that of traditional kungfu. He was probably influenced by other martial arts where the philosophy includes tenets like “win at all cost” and “no pain, no gain”. Traditional kungfu philosophy values tenets like “safety first, winning is secondary” and “training should contribute, not deter from, health”.

I am 63 years old & suffer from Parkinsons Disease. Is there any hope for this?

Yes, there is good hope to recover if you practice high level chi kung. Some of our students suffered from Parkinsons Disease before, but they were cured after practicing Shaolin Cosmos Chi Kung learnt from us.

From the chi kung perspective, Parkinsons Disease, like all other diseases, is due to energy blockage. Mental impulses, which carry instructions to muscles, are blocked from reaching their destinations. The chi flow from high level chi kung can clear the blockage, thus overcome the disease. 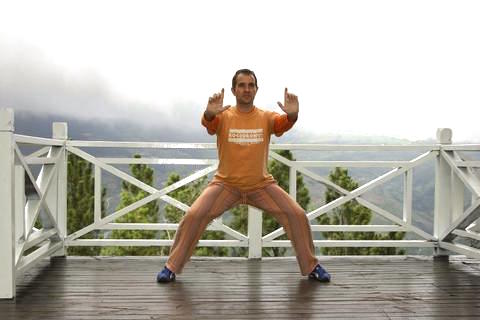 I have been practicing Chen Taiji for the past 3 months with a reputable master. He emphasized to me to train the Three-Circle Taiji Energy Stance to develop internal power and solid stance. I have been gradually working up to it, (can do about 7 minutes) but have had difficulty with the abdominal breathing. He points out that I tend to trap qi in my chest or throat, and that the qi needs sink down into the dan-tien. Also, he asks me to tilt my hips forward and bend at the lumbar region, and to concentrate on my kidneys when doing the exercise.

Your master gave you good advice. Spend some time over your Three-Circle Stance. Not only you will have internal force which will greatly improve your Taijiquan performance, you will also be healthy and full of vitality. You should aim at a minimum of 15 minutes, but you should progress gradually and enjoy your training along the way.

When I practice the stance, is it necessary to tighten my abdominal muscles before I breathe in gently? I find that if I use my entire stomach (everything below lungs) to breathe, I feel more comfortable, but I am not sure if this is correct? But when I do tighten my abdominal muscles, the breathing is a lot slower, and more concentrated. I do not know which is correct?

Different schools and different masters have different ways to teach the stances. In our school, we do not worry about the breathing, and we do not tighten any muscles, including the abdominal muscles. In other words, breathe naturally and relax, including to relax all your muscles.

In our school, there are only two steps in practicing the Three-Circle Stance and any other stances. The two steps are simple, but that does not necessarily mean easy.

First, get the form correct. In particular, make sure your body is upright. We do not worry about tugging in the tail bone, tilting the hips forward or concentrating at the kidneys.

Two, relax, relax and relax. This means we do not tighten any muscles, and do not worry about our breathing. 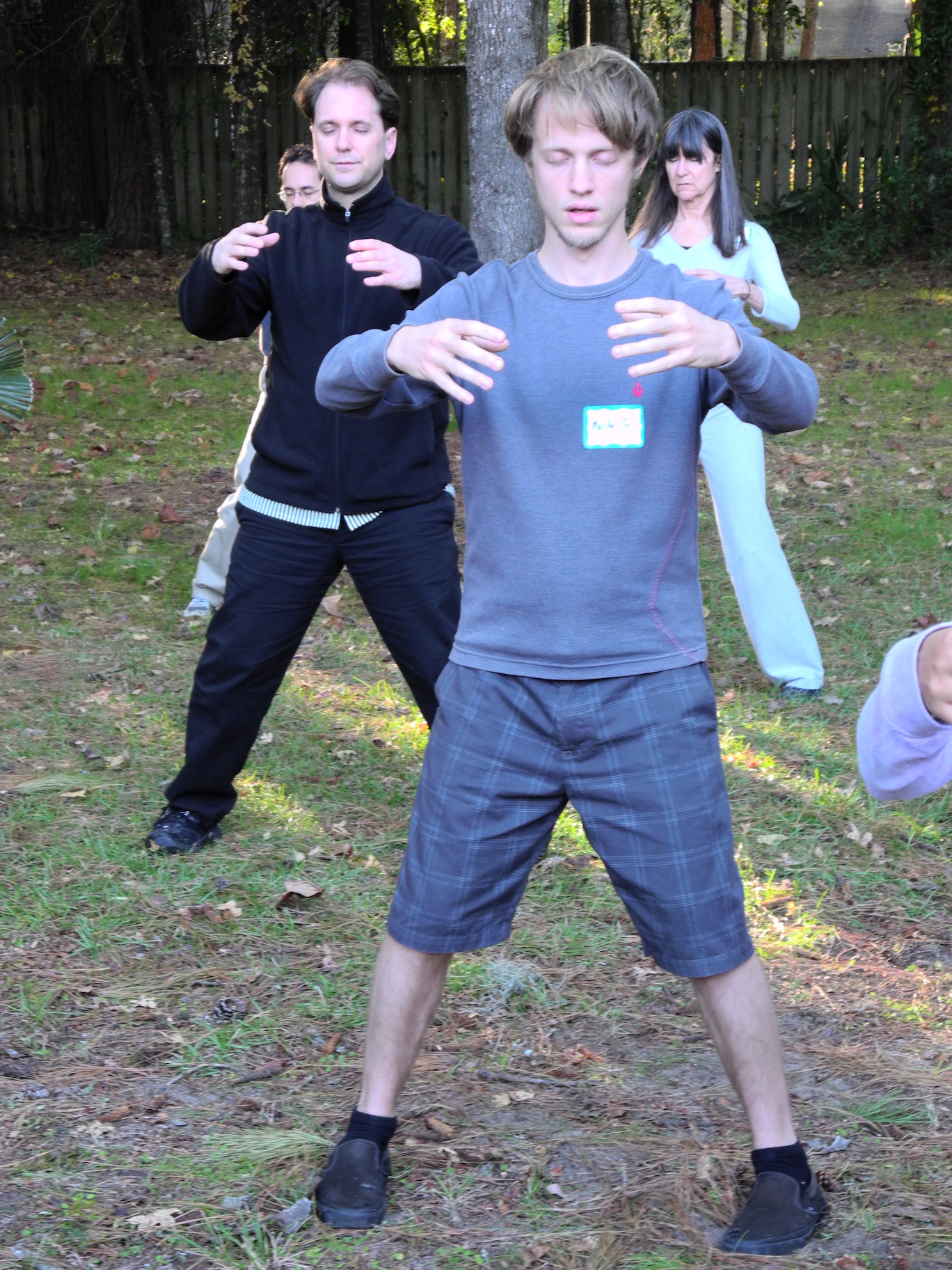 No, it is inadvisable to train both these two stances concurrently, especially when you are at the beginner's level. It is not harmful, but your progress is more if you focus on just one stance. This does not mean you do not learn and practice the other stances, but you focus only on one. Relatively speaking, Taijiquan focuses on qi, and Shaolin focuses on jing. Therefore, if you practice Taijiquan, training the Three-Circle Stance which focuses on qi is more cost-efective than training the Golden Bridge.

This does not mean that training the Golden Bridge is not beneficial, but it is relatively less cost-effective. Let us take an example of four Taijiquan students. Presume that all other things were equal, but A trains only Golden Bridge, B trains only Three-Circle Stance, C trains both Golden Bridge and Three-Circle Stance, and D does not train any stances. In terms of power, the listing from the strongest to the weakest will be A, B, C, D. But in terms of proficiency in Taijiquan the listing will be B, C, A, D.

Why is A only the third proficient when he is the most powerful? It is because power, while important, is not the only factor to determine Taijiquan proficiency. Relatively, qi is more important than jing in Taijiquan; hence, although B may be less powerful than A, he is more proficient.

Is it counter-productive or harmful to use Shaolin training techniques (i.e. Golden Bridge, Lifting the Sky), while studying Chen Taijiquan?

No, it is neither counter-productive nor harmful. In fact, Chen Taijiquan techniques, including all the stances, are found in Shaolin. Chen masters chose from the extensive Shaolin repertoire those techniques that gave them the best advantages.