SKILLS DERIVED FROM SPARRING CAN BE REWARDINGLY USED IN DAILY LIFE 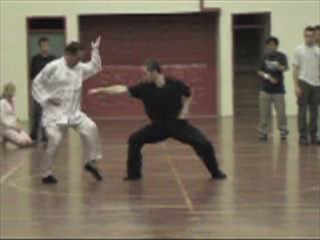 Happily in today's societies, fighting is uncommon. Therefore, the need to defend oneself is not as urgent as it was in the past. Then why do we spend so much time practicing combat efficiency? There are a few good reasons.

Firstly, when we say we practice a martial art, we would not be true to ourselves if we do not know how to apply what we practice to defend ourselves. Hence, being combat efficient in our art makes our practice meaningful and gratifying.

Secondly, even though fighting seldom happens, it may still happen. Being able to defend ourselves should it ever arises is a very useful ability. It gives us tremendous confidence.

But the most important reason why we practice combat application is that the skills we derive from our training, like quick decision, being relaxed in demanding situations, and being able to make instantaneous changes should a mistake occurs, can be rewardingly used in our daily life. Moreover, sparring in Shaolin Wahnam is not only free from injury but actually full of fun as well as helps to develop our character.

Please chick the pictures below to view the videos 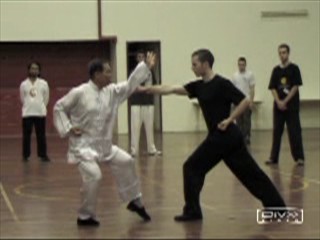 If you make a wrong decision in sparring, or in life, do not fret but instantaneously correct the mistake. For example, you thread your hand up because you have wrongly judged an opponent's middle attack for a top attack. Don't worry, just lower your hands to cover the attack. As always, lessons in Shaolin Wahnam are full of fun. You can see here that Sifu Jamie can hardly hide his joy. 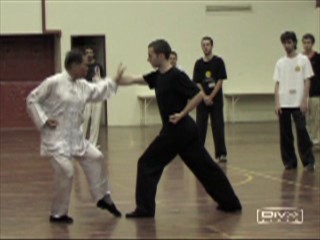 Sometimes it may not matter even if you fail to make an instantaneous change because the typical defend patterns “Golden Dragon Plays with Water” and “Single Tiger Emerges from Cave” can be used for both top and middle attacks. Nevertheless, this training in judging and making an instantaneous change if a wrong judgment is made, is very useful for our daily living.

Sparring can be Full of Fun 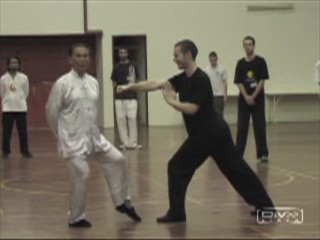 Actually you would not be hit even if you do not make any defensive movements with your hands because you have moved away from the target-range. Nevertheless, there are certain advantages besides better protection if you cover the attack even when it would not hit you. It would be easier, for example, if you wish to counter-strike. Note again that Sifu Jamie, the attacker here, is very happy — an indication that sparring needs not be painful but can be full of fun. 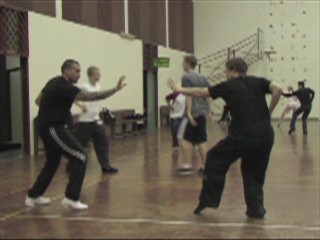 Many students do not realize that the onus of combat training is to develop skills, and not just learning techniques. Techniques can be learnt in a few minutes, even from books or videos. But it takes much time and effort to practice these techniques so that you can perform them skillfully. This video clip shows participants help one another in developing skills, and not trying to outdo one another in wild hitting. Comradeship is developed in sparring.

The Skills of Instantaneous Change

One of the important combat skills to be developed is the ability to make appropriate changes instantaneously. For example, if an opponent executes a middle strike but you mistake it for a top strike, don't freeze after the mistaken response but change immediately to an appropriate one. At first there may be a time gap between the mistake and the change, but gradually with systematic practice the change can be instantaneous. 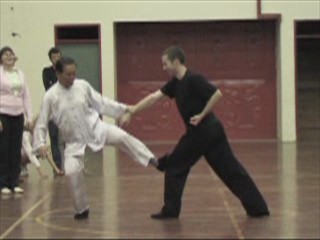 Actually you need not worry even if you do not make a right defence move with your hands, because your defence is already effective in your footwork. By retreating from a Bow-Arrow Stance to a False-Leg Stance, you already have moved yourself away from the attack, which means that even if you do not ward off the attack the opponent would not be able to hit you. 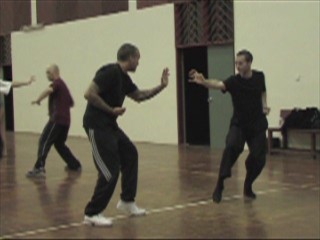 A heart-warming aspect of sparring practice in Shaolin Wahnam is that participants help one another, and not trying to hit each other as is common in many other schools. Here Sifu Jamie of Scotland reminds Mark of England the importance of opening the way before attacking. 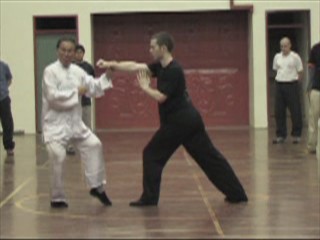 While one should not he slow or hesitant, he needs not be hasty in making his defensive moves. With proper training he would have time to choose the best move for the occasion. He must, of course, be ready with the move. It is not a case where he starts to think of a move when an opponent attacks. It is a case where he chooses the best of his prepared moves.

Changing from Immortal to Kitten 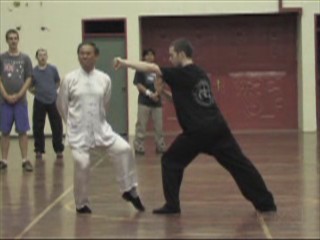 Sifu Jamie initiates a left horn-punch at Grandmaster Wong, who responds with “Immortal Emerges from Cave”. If Grandmaster Wong is too slow in his response, he would let the attacking punch pass, and push it away with “Kitten Wipes Face” (similar to “Cloud Hands” in Taijiquan). The horn-punch is unable to hit him because he has moved away from the attack by retreating from a Bow-Arrow Stance to a False-Leg Stance.