I have your fine book "The Art of Chi Kung" and have some questions. I have been practicing "induced chi flow" and "separating water" for about 2-3 weeks now. The movements have been very violent and forceful -- the spine bends backward severely to the center -- then to the right side and the left side.

You have been practicing correctly. But if you learn from books without the supervision of a competent teacher, it is best that you do not go into vigorous movements. This is a safety precaution.

If you have a competent teacher supervising you, you may move as vigorously as you like. The vigorous chi movement is excellent in breaking through blockage.

In addition, the pelvis can move sideways to the left or right side producing forceful flexion of the quadriceps and knee, with much pressure down the leg and into the ankle and foot. When these movements happen, should I stay that way waiting for the chi flow to clear the area and to change, or should I tell myself to slow down so that I can then return to a normal standing position?

As you are practicing without the supervision of a competent teacher, you should tell yourself to slow down, then come to a graceful stop. Remain standing still for some time before completing the session.

Indeed, you should not allow yourself to be moving so vigorously in the first place. When you find yourself beginning to move fast, just tell yourself to slow down.

You have practiced correctly so far, but if you move vigorously and do something wrong, you risk getting serious adverse effects. It is easy to practice wrongly without the personal guidance of a competent teacher. 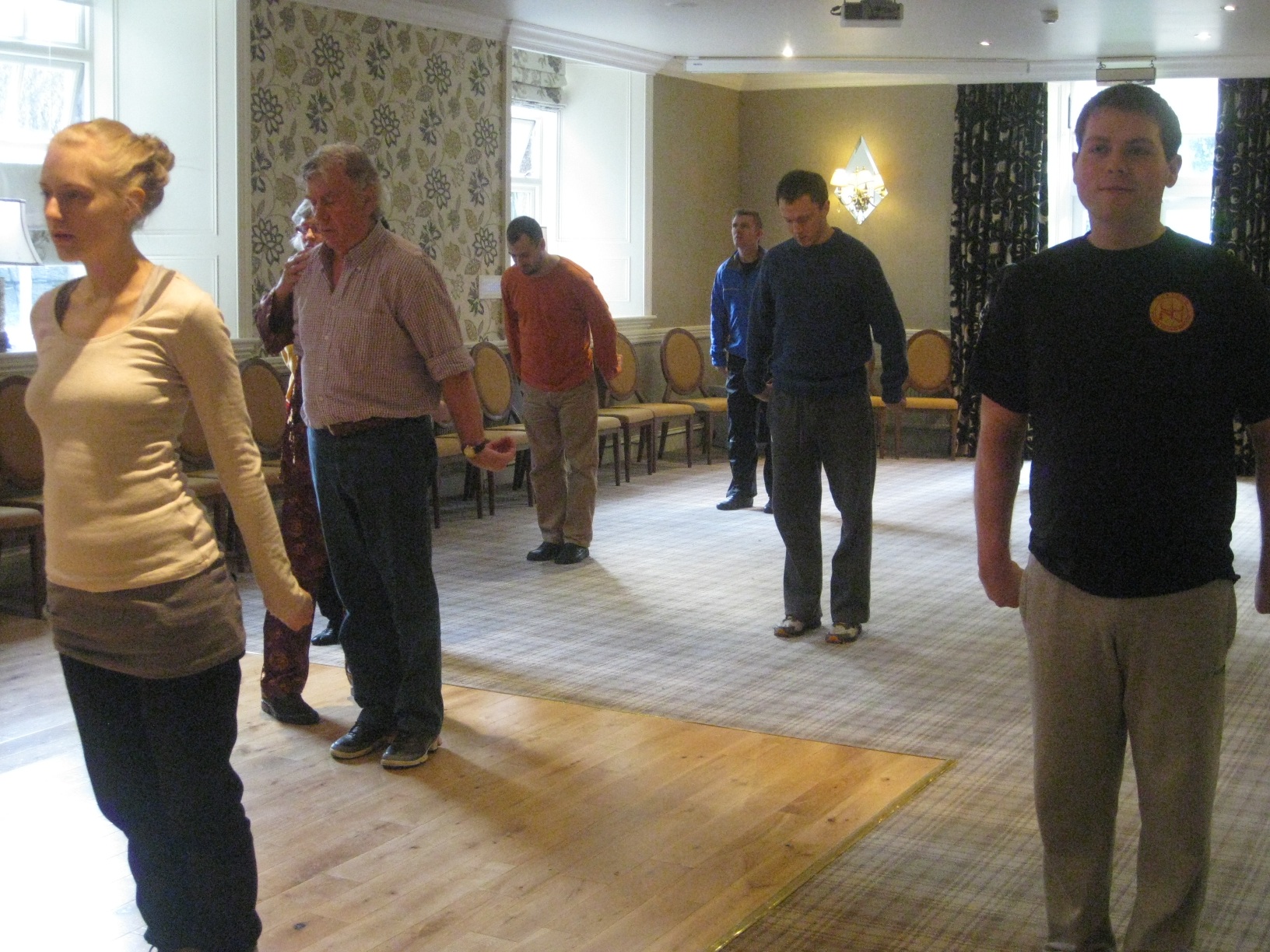 When is the best time to do these exercises, first thing in morning or at bedtime? How about the influence of meals? How much time to allow before and after meals to do them? How do I get maximum benefit?

The best time to practice chi kung is at sunrise. Other excellent times are at midnight and at sunset.

Sceptics may accuse us of being boastful or marketing our school, that is their business. But we would like sincere seekers to know of the rare opportunity we offer. If you practice on your own even when your practice is perfect, your result is not a portion of what you will get even when you make a lot of technical mistakes if you learn personally from us.

For example, what you have achieved in two or three weeks practicing on your own, and your result is very good compared to what most other people learning from books can achieve, is just about 10% of what a typical student attending my regional chi kung course will get in one day even when he makes many technical mistakes!

More significantly, your progress at this point marks the climax of your development. It is unlikely you can go further, for doing so without proper personal guidance will expose you to serious risks of wrong practice and deviations.

This does not mean you won’t improve further. You may have betters result if you continue practicing on your own, like overcoming the ailments you are suffering now, but your results will not go beyond the level you are presently at. In other words, you may improve within your present level, but not beyond your present level.

Students who learn from us personally are different. Even when their result now is 10 times better than yours, they are only at the beginning of their chi kung career. They can attain advanced results that those learning from books cannot even imagine. As an analogy, university graduates can attain results that elementary students cannot even imagine.

It is not without good reasons why our fees are the highest in the world. But a lot of students have told us that they would pay 10 times the fees to get the benefits they receive from our training.

In fact, you are already better than many other students in chi kung benefits. You can generate an energy flow, and if you continue practicing what you are doing (but heeding my advice to have your energy flow less vigorous), you can eventually overcome your ailments. Most other practitioners, including instructors, cannot generate an energy flow, and no matter for how long they may practice, their gentle physical exercise cannot overcome their ailments

More recently the movements have been gentler, or not at all. Is this a sign of my chi healing me?

I cannot give you an informed answer without seeing how you practice. But based on what you have written in your e-mail, I don’t think so.

But it is very unlikely that it is a sign chi is healing you. In fact the reverse is true. When you have chi flow movements, chi is healing you. When you are healed, the chi flow movements may become gentler or not outwardly visible, but you can still feel chi is flowing inside you. And even without consulting your doctors, you know you have been healed.

If you attend even a one-day regional course by me, you will have all these answers from direct experience. 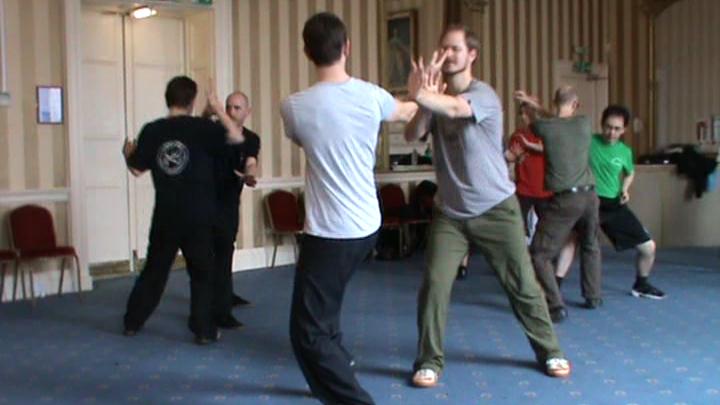 Sparring during a Baguazhang class at the UK Summer Camp 2012

Finally, is there one best exercise to remove water bloat-stomach fluid accumulation, especially fluid sounds on the stomach left side especially when I do abdominal breathing, or will these exercises do the trick?

Self-Manifested Chi Movement, described as Induced Chi Flow in The Art of Chi Kung is excellent for overcoming bloat-stomach fluid accumulation, or any disease. It is the platinum chi kung for overcoming illness.

If you learn on your own from books, it is not advisable to practice Abdominal Breathing. It is easy to make mistakes.

I appreciate any help you can give, and I do believe that these exercises are beginning to heal me in many ways! Thank you, Sifu!

I would recommend that you attend my Intensive Chi Kung Course. Please see my website for details and apply to my secretary as soon as possible. You will be amazed at what you will learn in just three days.

Overcoming pain and illness is just a stepping-stone in our chi kung practice. It is not even an aim. There are five aims as follows:

Overcoming pain and illness is included in good health, but they are not the same. Having good health is much more than merely overcoming your ailments. 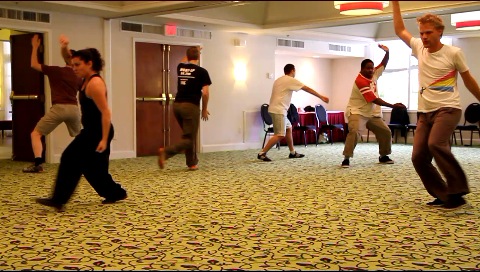 Are Baguazhang and Xingyiquan related to Taoism?

The answer can be yes or no depending on what we mean by related.

"Taiji", for example, is a fundamental concept in Taoist philosophy meaning the Cosmos, "Quan" in Chinese literally means "fist", but figuratively means "kungfu" or "martial art".

"Bagua" means "eight trigrams", and refers to eight symbols, each represented by three broken or unbroken lines in Taoist philosophy that symbolize eight archetypical conditions designated as heaven, earth, fire, water, wind, thunder, mountain and swamp. “Zhang” means “palm”. In Baguazhang, or Bagua Kungfu, the palm rather than the fist is used.

Hence, from this perspective, Taijiquan, Baguazhang and Xingyiquan are regarded as Taoist arts because the names of the arts are derived from concepts in Taoist philosophy.

But apart from Taijiquan the principles of which is based much on Taoist philosophy, like the concepts of gentleness and flow from the Tao Te Ching, there is not much between Baguazhang and Xingyiquan on one hand and Taoism on the other hand.

Hence, we can also say that Baguazhang and Xingyiquan are not related to Taoism. We may even include Taijiquan in this respect because one does not have to believe in Taoism or know any Taoist philosophy to excel in Taijiquan, Baguazhang and Xingyiquan. In the same way, one does not have to believe in Buddhism or know any Buddhist philosophy to excel in Shaolin Kungfu.

A knowledge of Taoist philosophy will be helpful, but this applies to knowledge of any other areas. A knowledge of science or computer technology, for example, is also helpful in promoting a better understanding and performance of these arts.

My Chinese friends who practice Taiji in a park say that Shaolin Kungfu is hard and external, whereas Taijiquan, Baguazhang and Xingyiquan are soft and internal. Is this true?

Again the answer can be yes or no.

According to legends, the First Patriarch of Baguazhang learned the art from two Taoist priests on Jiuhua Mountain in the 19th century. Xingyiquan was invented by the famous Song general, Yue Fe, in the 12th century with no connection with the Wudang Mountain.

It was also likely that Baguazhang was evolved from Shaolin Kungfu. There are also many Shaolin features in Baguazhang.

While Taijiquan and Baguazhang are "soft", Xingyiquan is "hard". It must be remember that "hard" and "soft" here are translations of the Chinese terms "gang" and "rou", which may have very different connotations from what most Westerners conceptualize hard and soft are. Soft force, for example, can be very powerful.

In other words, most people today perform Taijiquan, Baguazhang and Xingyiquan, as well as Shaolin Kungfu and other kungfu styles, as external dance or gymnastics, without internal force and without combat application. If they ever fight, and they can be formidable, they use Boxing or Kick-Boxing.