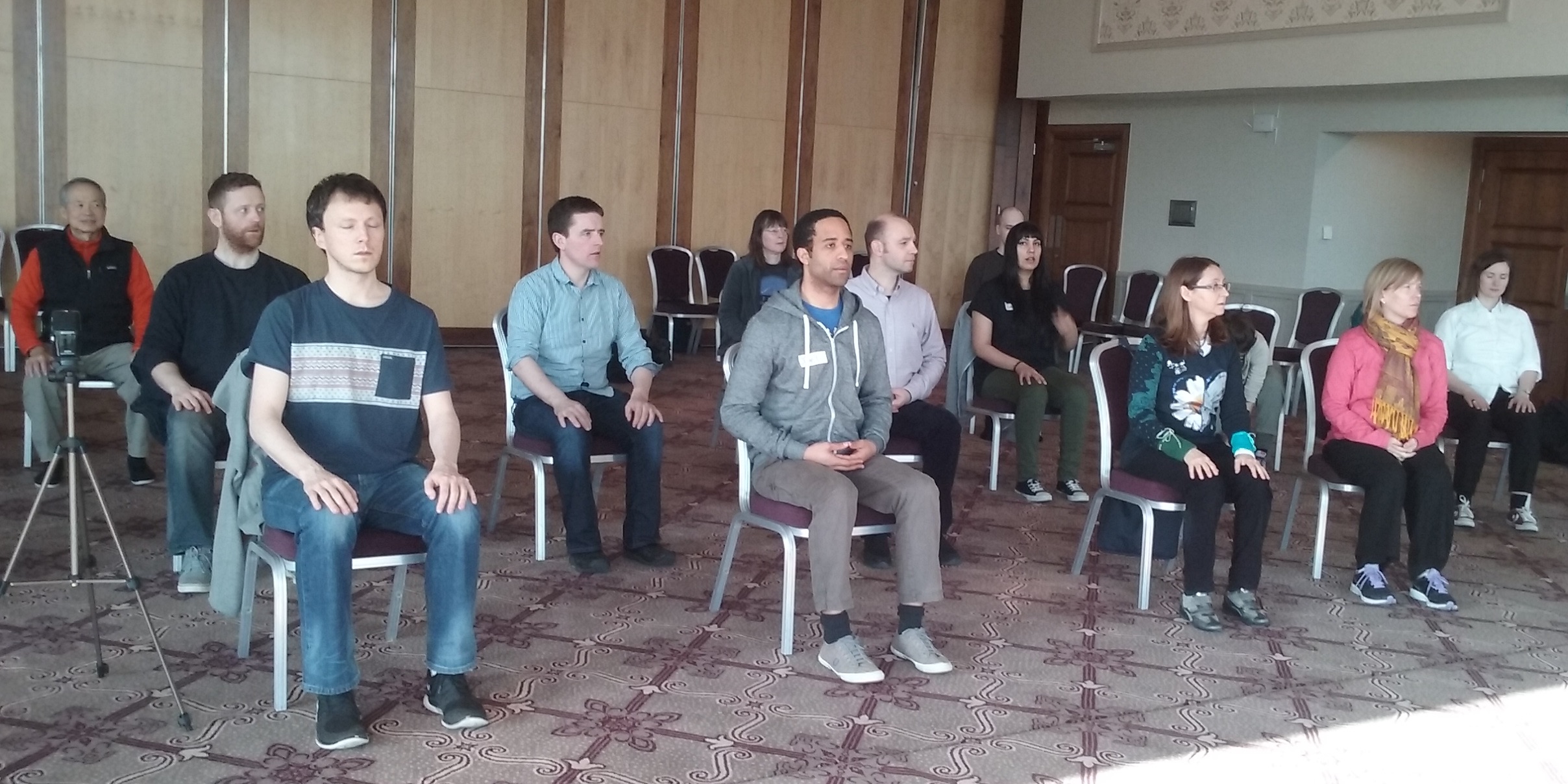 Course participants at an Intensive Zen Course in Dublin in 2016

The term "Enlightenment" in Buddhist philosophy means perfectly merging with the Cosmic Reality where there is no knower and the known. In Western culture it means returning to God the Holly Spirit.

In English the word "enlightenment", like the age of enlightenment, has a different meaning. It means having a clear intellectual understanding.

It is worthy of note that intellectualization is not present in the Buddhist concept of Enlightenment. Once there is intellectualization, or thought, the transecendental Cosmic Reality will be transformed into the phenomenal world where there are knowers and the known.

The paramount path to Enlightenment is meditation, which means the training of mind or spirit. The mind is trained to the supreme level where it recognizes that the personal mind is an illusion, that actually there is only all mind. In Western culture, it means there is only God and nothing else. In scientific terms, it is the universal spread of energy.

I recall that when I first taught meditation to English speaking students more than 30 years ago, I had difficulty translating the Chinese words "zuo chan" and "jing zuo" to them. I translated the words as "meditation", as the term had become established, although I was aware that "to meditate" might mean "to think", but in our form of meditation we didn't think.

Now, with better hindsight, I may use terms like "sitting in Zen" or "sitting silently", which are their literal meaning.

The term "meditation" was first used by early Christian fathers in spiritual cultivation. In meditation, they thought of God's words, and reflected on them. Later, when similar forms of spiritual cultivation came from the East, the term "meditation" was also used because their outward forms appeared similar, though in some forms of Eastern meditation, like in Zen, it was advocated to avoid thinking.

Zen is closely associated with our school. So in our meditation, thinking is often avoided.

The term "visualization" may also need some brief explanation. We use this term because it has become established. But when we "visualize", it is more of having an intuitive thought, and not having a clear image.

For example, in sparring practice we may visualize an opponent kicking us. We just have a gentle thought of a kick coming. It is not necessary, in fact it would be detrimental, to have a clear image of the dress an opponent is wearing, and how he moves in to kick us. 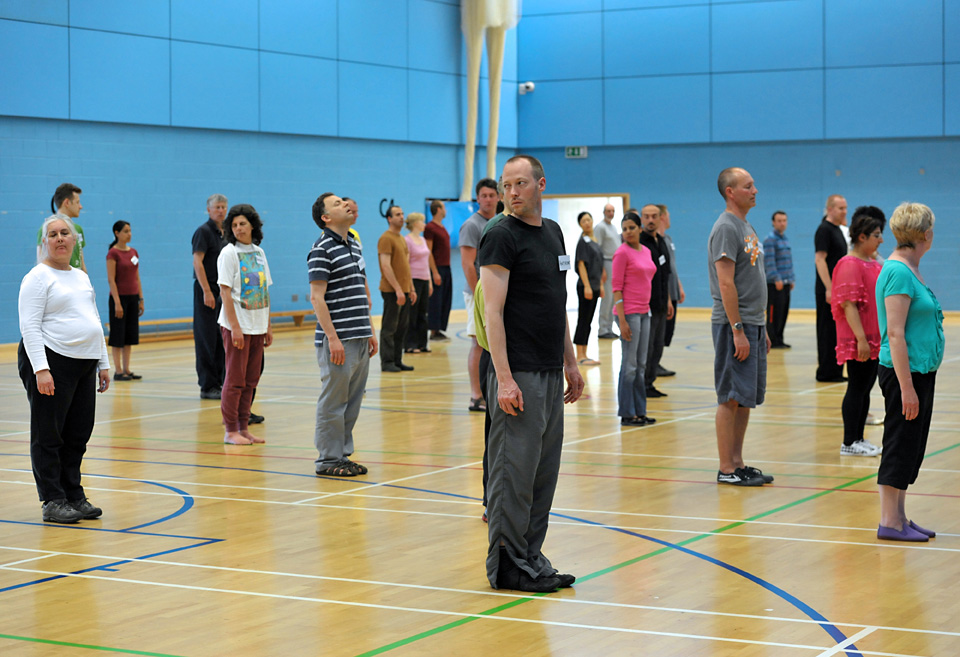 Visualization is much used in Bone-Marrow Cleansing

I have learnt from teachers and not by myself. But I would like your advice.

You would have noticed that we have become so cost-effective now that I advise our students to aim at only 30% of what they attained at a course with me or when they learned from their sifu. Just getting 30% of the benefits is more than enough for their needs of practicing chi kung, like overcoming illness, and attaining good health, vitality and longevity. If they get more results everyday, they may over-train.

If you haven't learnt from us, whether you should practice the other chi kung exercises depends on how competent your teachers are. I am not referring to your teachers now, but referring to teachers in general. Most chi kung teachers today are not competent, though some of them are actually very nice people. Practicing these exercises not only bring you no chi kung benefits, but may also harm yourself, often without your and your teachers knowing.

A competent teacher, for example, will not teach Micro-Obit to a student who does not know whether he should practice this exercise with other exercises. In other words, if a student is taught an advanced exercise like the Micro-Obit, he will be advanced enough to know how and when to practice it.

These six sounds may be represented as "su shu hu si chu xi". There are also other ways following other systems of lettering, to represent the six healing sounds in writing. There are easily more than 10 different ways to pronounce each of the six sounds, which means there are very high chances of not pronouncing them correctly. If you realize this fact alone, you may wonder why a responsible master would post these sounds on the internet or in books and recommend others to practice them.

Yes, you can bend your knees a little when performing "Carrying the Moon"

For prostate issue, chi flow is the best answer. You can perform any suitable chi kung techniques, like "Carrying the Moon", "Rotating Knees" and "Lifting the Sky", then enjoy a chi flow which will overcome the prostate problem. 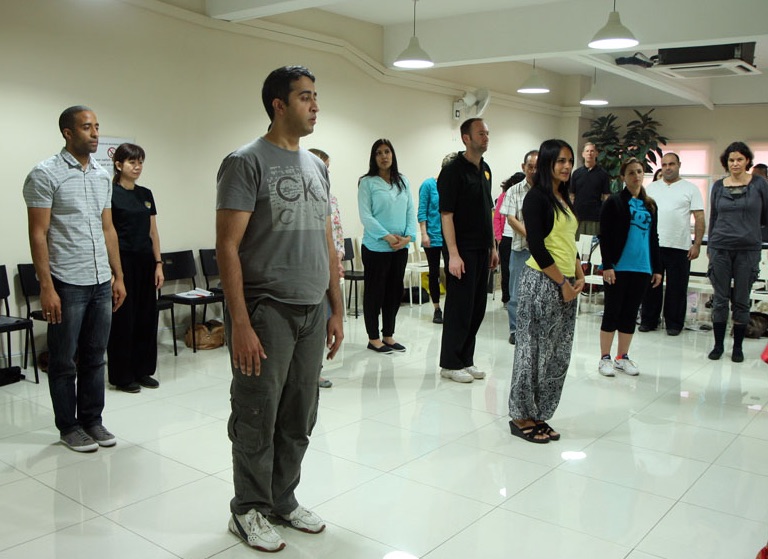 Sifu, you said that we could achieve in one month what it would take you a year to achieve. Why is this so? Do you do anything special, like giving us chi?

It is because of my more effective teaching methodology. I don't purposely give you chi, though my large chi field may enhance your result. When I walk past, for example, many students who were previously motionless, started to move due to my chi stimulating their chi field. For this reason, sometimes I purposely stand at a corner of the hall so that you would depend on your own chi flow to progress.

There are a few factors in my improved teaching methodology. One important factor was differentiating skills from techniques. During my own student's days, like most practitioners today, I thought that result was due to my diligent practice of appropriate techniques. In other words, if I practiced the techniques diligently, I would derive the expected result.

Later, during my own teaching in my earlier years, I discovered that besides the right techniques, more importantly successful practitioners must have the necessary skills. This is very obvious in both chi kung and kungfu training, but most people are unaware of it. Most chi kung and kungfu practitioners have the right techniques, but most of them (outside our school) cannot generate an energy flow and cannot apply their kungfu for combat. It is because they do not have the necessary skills.

Then, why a small percentage of students can generate an energy flow and apply their kungfu for combat. This is because, due to their diligent daily training, they develop the necessary skills unknowingly. Suppose that for three days in a month, their training has become so ideal that the necessary skills present themselves. These are the days when they can derive benefits form their training. So, in a year they would have successful training for 30 days. Eventually these students become masters.

But our students have the techniques and the skills every day. They can train successfully for 30 days in a month. Hence our students now can attain in one month what I, like other students today, needed a year.

Another important reason why our students can have the skills on the very first day is because I transmit the skills to them from heart to heart. Other students have to develop the skills themselves from their own practice.

In terms of past lives and next lives, who is to say that they actually occur in accordance with our linear perception of time. Could our next life be the 1700s? Our previous life in the 2300s?

I didn't record the names of those who said that past lives and next lives occurred in accordance with our linear perception of time, but I believe there are more people by a big margin holding this opinion than the reverse opinion.

Among those who believe in the linear perception of time, there are also far more people believing that time goes forward than time goes backward. So, according to the majority view, your next life in more likely to be in the 2300s than in the 1700s, or any time after the present moment than before the present moment.

Even those who talk about linear time going backward, or cyclic time or any other concepts of time, including the concept that time is a human construct and not real, and neuclear physicists whose concept of time is very different from that of ordinary persons, use linear time going forward in their daily life. If they go to bed on Wednesday night, for example, and wake up the next morning, it is Thursday, not Tuesday, or ten years earlier. 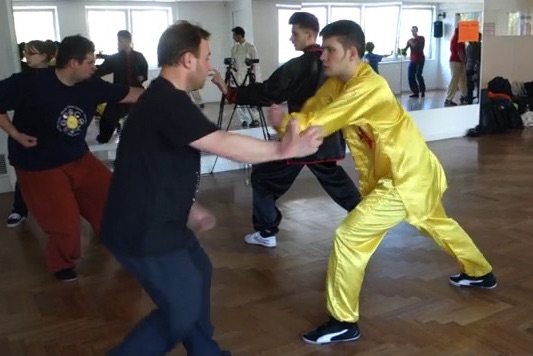 A course on the Five-Animal Set in Vienna in 2016

Is there a technique where all the Shaolin five animals are trained?

As an analogy, those who have the skills to drive a car forward or bakcward, park a car, drive it uphill or downhill, on an expressway or to a market place, will be able to do so with any car. Those who don't have these skills will be unable to do so regardless of what car they have.

In his daily life, whatever he does, he can also manifest presence of mind, energy flow, internal force, speed and elegance. Initially he may have to make an effort to do so. But gradually these qualities will manifest themselves spontaneously.

Can you please tell us more about the 12 types of bridge-force of the Iron Wire Set?

Straight-force is going straight in, like a thrust to the throat. Separate-force is opening, like opening an opponent's defence. Stable-force is to subdue an opponent, like a taming-hand to prevent an opponent attacking.