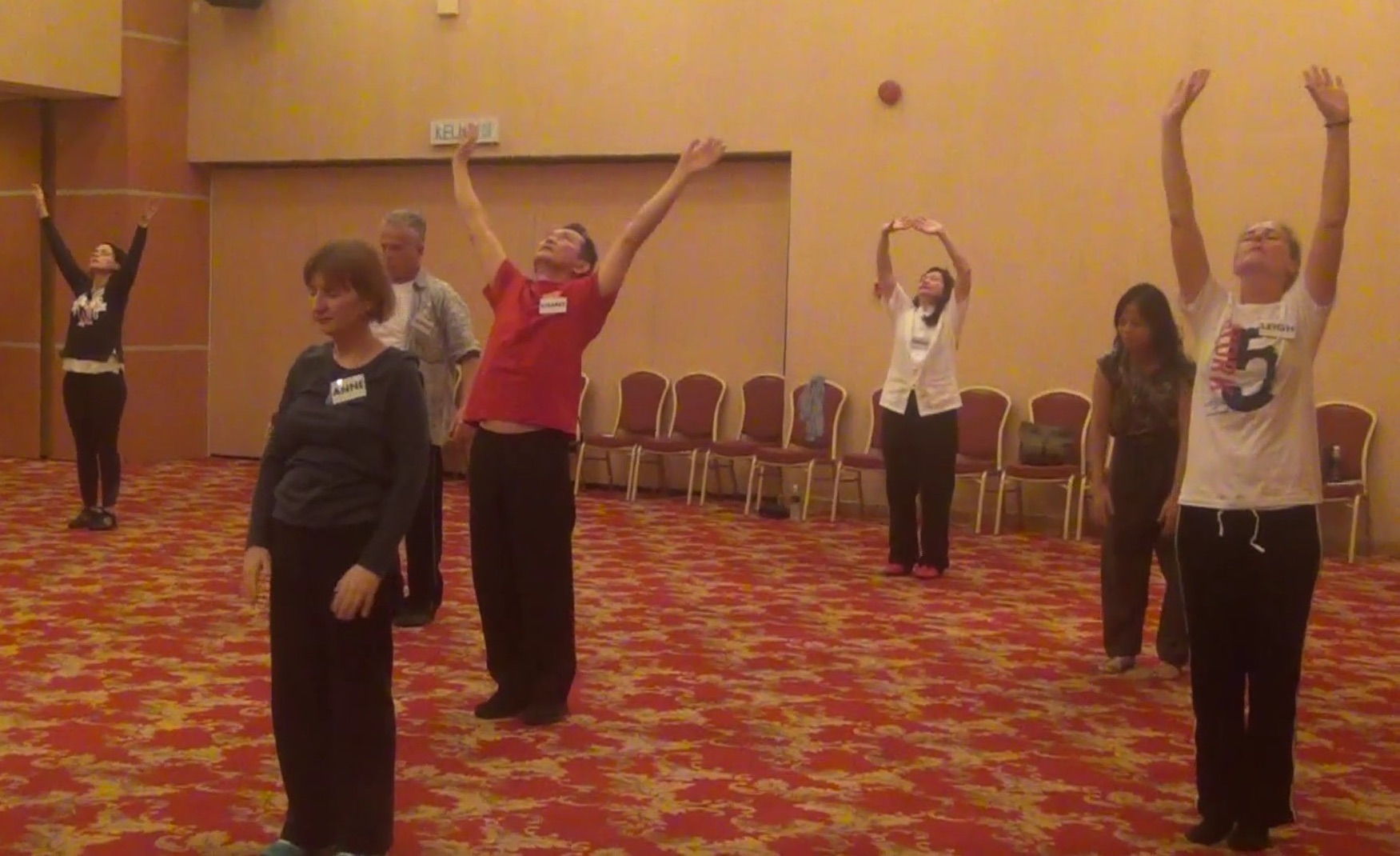 We have a chi flow on the very first day of our learning chi kung from you. Why do so many other chi kung practitioners not experience a chi flow?

Not many people know that chi flow, or energy flow, is the essence of chi kung, and that one has to be focused and relaxed at the same time to generate a chi flow. These important points are mentioned in chi kung classics, but not many people have access to these classics, nor understand them even if they have access.

We are very lucky. We have access to chi kung classics and understand them. More significantly we differentiate between techniques and skills, and I teach the techniques and transmit the skills so that students can generate a chi flow immediately instead of practicing the techniques correctly for many months to acqure the skills.

Many other chi kung practitioners are unable to generate a chi flow even when they have practiced chi kung for a long time because they are ignorant of these important facts. Even if they know the facts, like from reading, they lack the necessary skills although they may have the right techniques.

This, in fact, is the situation of more than 80% of chi kung practitioners all over the world today. Their chi kung techniques are genuine, but they lack the skills to generate a chi flow. It is the chi flow, not the techniques, that gives chi kung benefits of good health, vitality and longevity.

The situation of Taijiquan (Tai Chi Chuan) today is worse. More than 90% of Taiji practitioners today do not practice Taijiquan as a wonderful internal, martial art that it is, but as an external dance. They even add music to their dance. The Taijiquan techniques they practice are genuine, but they lack the skills to use their techniques to develop internal force and for combat.

Sorry for taking some of your time again.

I have a lot of issues with my stepfather. I can't stand hearing him.

I have been advised by both you and Sifu Andrew Barnett to leave the house to avoid trouble. I wanted to but not feasible.

My body needs more energy. I have poor appetite and vomiting. These issues have lasted for years. I still have lots of rage and stress when my stepfather is around.

Even if I leave the house, I am too weak at the moment to care for myself. I lack energy. I am too weak to go outside for a walk for now. Is there anything I can do at this point?

Thank you once again for your generosity and sorry for taking some of your time. I am really grateful to you for reading my emails each time.

Despite cancelling the course which you applied earlier, I still continued to give you good advice many times. But you don't follow the advice although you thanked me.

How does attending my Intensive Chi Kung Course help you to overcome your problems? More than teaching you fundamental chi kung skills and techniques, it enables you to change problems into opportunities for improvement. Many people have done this. Not only they have overcome their previous problems, but also they find life joyful for living. Whether you are going to make use of this rare opportunity is, of course, your choice. 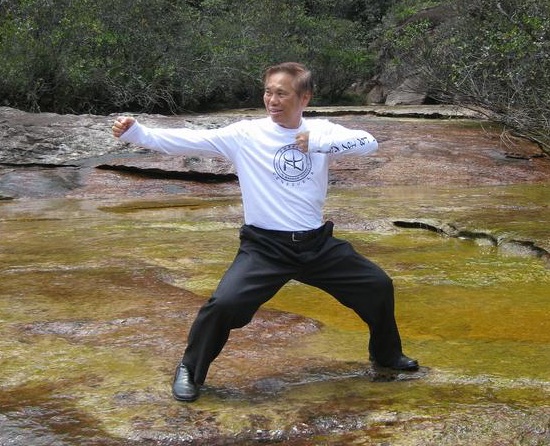 My memory of your story about the exercise from the 18 Lohan Arts, "Shoot Spear at Mystical Gate", was blurred. Could you please enlighten me on the story? I only roughly remembered a great warrior shooting some arrows at a gate.

"Shoot Spear at Mystical Gate" was about the story of Lu Bu, a great warrior of the Three Kingdoms Period in Chinese warring History. "Mystical Gate" here referred to the name of a gate or passageway of a fort.

Lu Bu rode his famous horse, named Red Hare, about a hundred steps from the Mystical Gate. If someone could shoot an arrow at a target while standing stationary a handred steps away, he would be considered a sharp shooter.

When I performed the Three-Circle Stance, my arms opened up. Do I bring them back to the original position?

A good kungfu saying in this case is "Seen hok kei seong, hou yeng kei ping" (Cantonese), which means "First learn the established, then make modifications according to the situation".

When performing the Three-Circle Stance, the established method is to hold the hands in a small circle in front of the chest in a goat stance. Later, if a lot of energy has been generated, the hands may open up spontaneously. Let it be.

This is first "you-wei", then "wu-wei". First you hold your hands in a small circle in front of your body. Then if your hands open up spontaneously, you let it be. 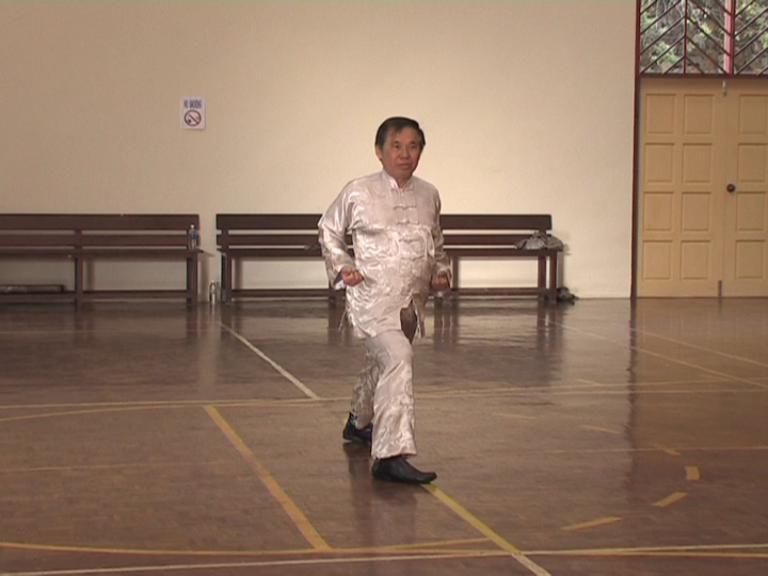 My boyfriend ended up choosing not to study Shaolin Wahnam chi kung.

It is perfectly fine if your boyfriend does not want to practice chi kung from Shaolin Wahnam. There is nothing wrong with that. It is his choice and his right.

You should offer him and other people an opportunity to enjoy the wonderful benefits of practicing Shaolin Wahnam chi kung, but you should not waste any time and effort convincing him or anybody to learn from us.

On the other hand, it was great that your parents learned chi kung from us, and I am sure they will reap the benefits if they continue to practice even at 30% of what they did at the course.

My boyfriend loved me and tried to be my hero. All this while my boyfriend provided for me, including food and a place to stay. But now he is thinking of ending our relationship.

You should learn to stand on your own, and not to depend on your boyfriend's or anybody's charity. You live in one of the richest countries in the world. If you are determined to earn a living, you surely can. Even illegal immigrants who are not citizens can still have a comfortable life in your country. A poor person in the West is rich in Africa or even Asia.

You can make one more attempt to love your boyfried, not because you want him to provide for you but because you love him. It is actually easy for a woman to show her love for a man. If he does not respond favorably, though you love him, leave him for his and your sake, and find another man who loves you.

You are a beautiful and lovable woman. There are literally thousands of eligible men waiting for you. You only have to make the right and courageous effort to find them, and choose one. 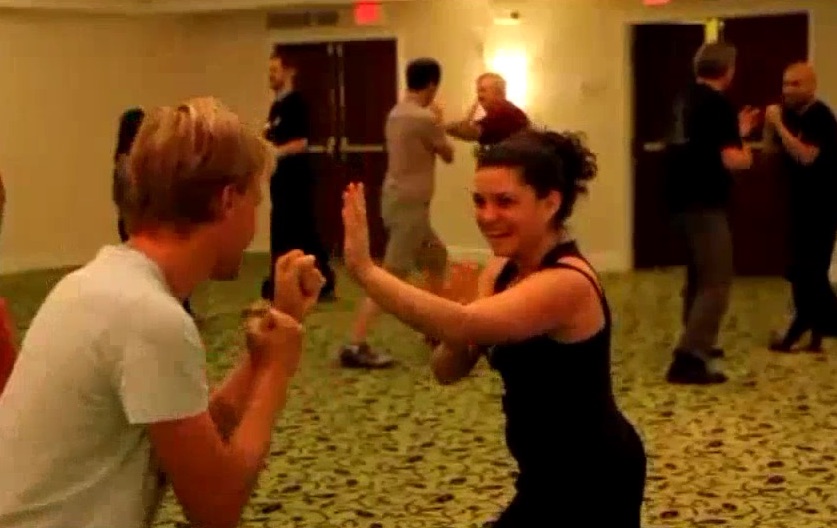 The techniques and skills of Taijiquan must be correctly learnt

Why do many Yang Style Taijiquan students do their Bow-Arrow Stance wrongly?

We say that many Taijiquan students, especially in the West, perform their Bow-Arrow stance wrongly because it has brought them harm instead of benefit. Many of them have knee problems and back pain which they did not have before their Taijiquan practice! Had they practiced their Taijiquan form correctly, especially the Bow-Arrow stance, they would have overcome their knee problems and back pain, not started them.

This is a sensitive issue, but I choose to speak the truth for our, and also their, benefit. But if they choose not to listen, it is their problem and also their right, and we are not going to waste time over it.

The points I explained about stance training are secrets, not normally taught by masters to their students. The feet of the Bow-Arrow Stance are in line, with the toes hooked in about 45 degrees. The front knee should not bend beyond the front ankle. If you examine old pictures of past Yang Style masters, they performed their Bow-Arrow stance in this way.

But when they perform their Bow-Arrow stance, many Taiji students today have their front toes pointing forward, and their back toes pointing sideways. Their feet are also not in line. Worse, they shift their body forward, instead of rotating their body at their waist.

Another group of people who perform the stance wrongly, but in a different way, are wushu students. Their Bow-Arrow stance is too low, with their front knee beyond their front ankle. To the initiated, it is obvious that this position places excessive stress on their front knee, and chi (or energy) is locked up there, instead of flowing down to their feet to root them onto the ground.

But wushu students are not aware of these important points about the Bow-Arrow stance, and also not aware that their wrong practice causes them knee problem and back pain. It is no wonder that they cannot perform beyond 20 years of age.

Isn't it true that one has to learn the techniques and practice them well?

Taijiquan is an art, and like any art, it has to be learnt -- correctly. More importantly, the correct techniques have to be practiced well over a period of time so that they become second nature.

Not many people realize that walking is also an art. We have to learn the techniques of walking correctly and practice them well over a period of time so that they become second nature to us. Crawling is natural. Babies do not have to learn how to crawl, but walking has to be learnt. The advantage of walking over crawling is obvious, so we learned how to walk.

Similarly there are many advantages of knowing Taijiquan over not knowing it. The advantages are not just for combat, which seldom happens in our modern societies, but for enriching our daily life. So we learn it -- correctly -- and practice it well so that the techniques as well as the skills of Taijiquan become second nature to us.