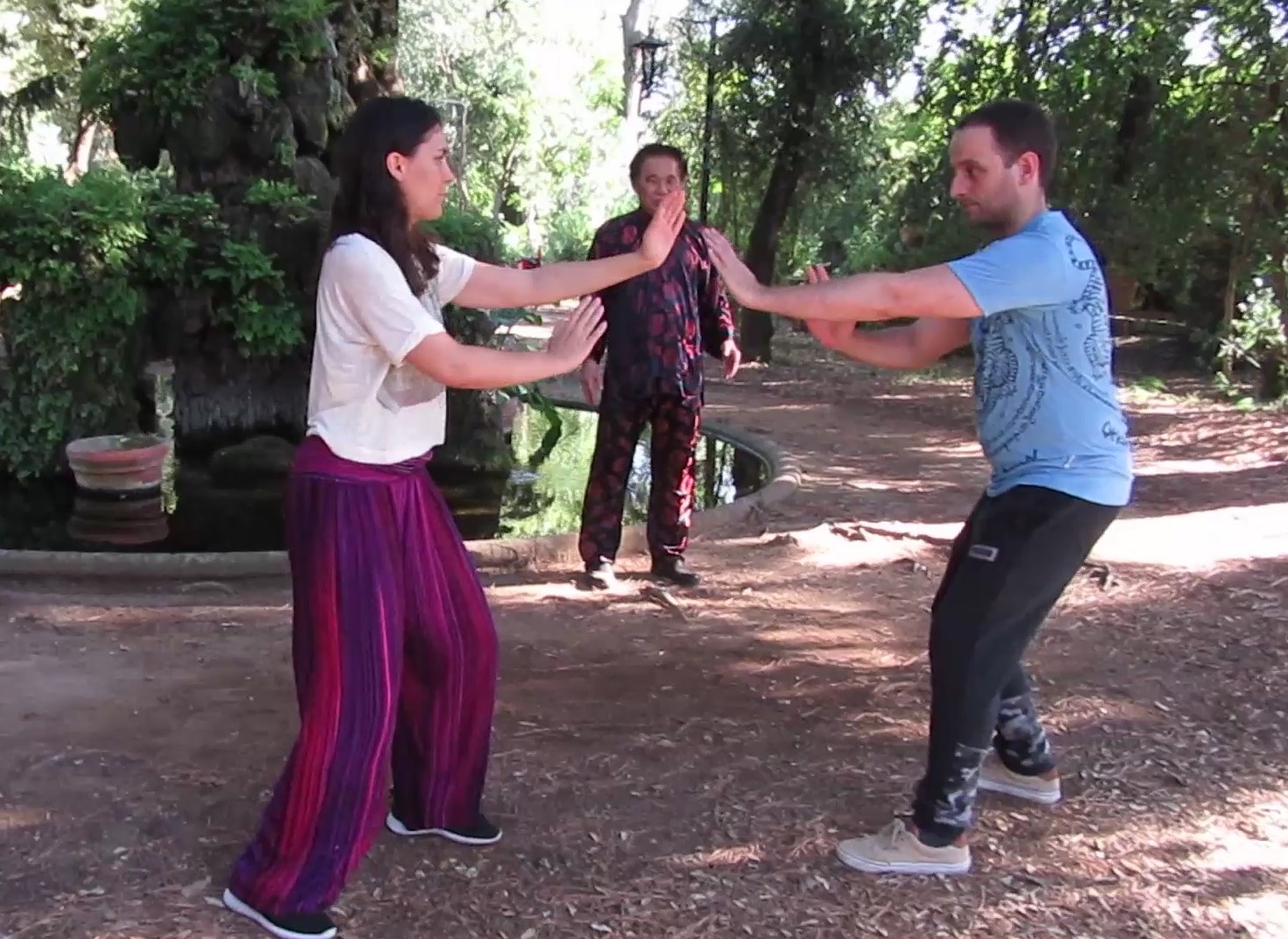 I am so inspired by the point that you made about attracting 50 people to a talk and converting at 40% sign up on the day, I am totally intrigued at how you made this conversion. Can I please ask Sigung, what was it that made the talk so successful and what made the participants want to sign on the day?

The key point was sincerity. I really wanted my students to benefit from genuine chi kung. I started to teach to the public with chi kung, though earlier I taught kungfu in Shaolin Wahnam Association. Kungfu was a hobby.

It was latter that I realized practicing genuine kungfu would give better results in good health, vitality, longevity, peak performance and spiritual joys than practicing chi kung, though the benefits of practicing genuine chi kung were tremendous. It was Robert Trout, who was 85 years old then, that gave me the realization.

There were other reasons. One main reason was that we practiced genuine chi kung and kungfu. Not only our chi kung and kungfu were genuine, we practiced at a very high level. We were directly from the Shaolin Monastery. At that time, my level and the rate of my progress were less than one-tenth my level and my progress rate now. But even when I first started teaching about 35 years ago, we were genuine and our level was high.

I did not charge high fees, though my fees were higher than those charged by other teachers. It is through direct experience the hard, long way that I discover students will appreciate our arts if our fees are high. But it is important that the benefits our students get are much more than the fees we charge. This is our honour.

The biggest group who appreciate our arts is still healthy young people who practice kungfu. We give them zest and joy, and much later when they have grown old, longevity. Those I literally saved from dying from so-called incurable diseases pale far behind.

What are the benefits of expanding into the Cosmos?

There are many wonderful benefits.

We feel very free and happy. We are not bound by any physical body. We are everywhere or nowhere. Hence, unless one is very skilful, it is very important to practice expanding into the Cosmos in the presence of a master. The master can bring us back to the phenomenal world.

We overcome the fear of physical death. It is perhaps the greatest fear of all. Our spirit never dies, we only change our physical bodies, until when we are ready we merge into the Cosmos, called by different peoples as return to God the Holy Spirit, Enlightenment, or merging with Tao.

It is just incredable that in an advanced course like "Small and Big Universe", we can expand into the Cosmos in a few days. If an aspirant can achieve that practicing every day for a few hours for many years, he would kiss the feet of his master. 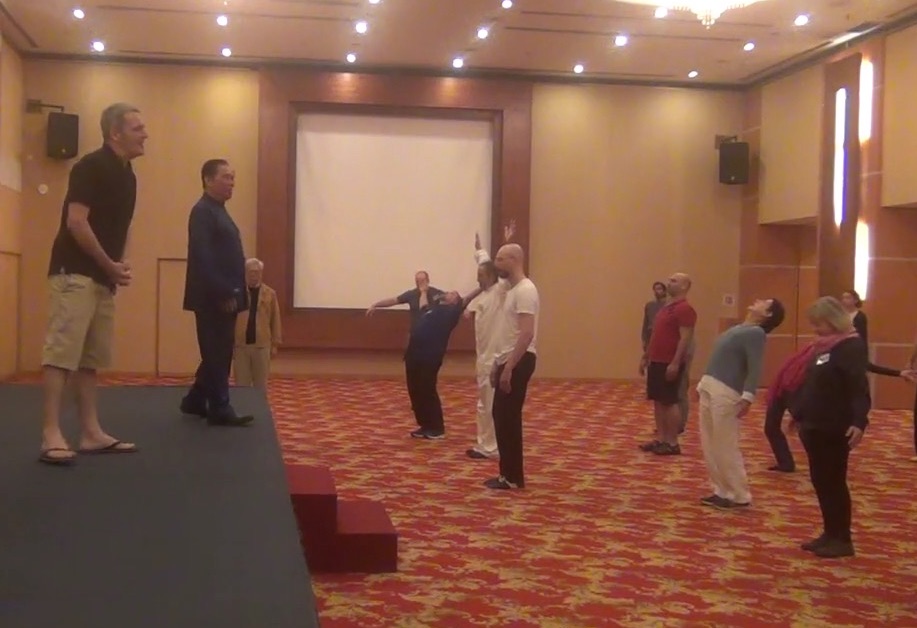 Expanding into the Cosmos

Can we practice Abdominal Breathing and Reverse Breathing at the same time?

In fact, at the beginning if one is new to the Small Universe although he may have practiced other types of chi kung for many years, he should go over all the steps of the Small Universe, which will include Abdominal Breathing and Reverse Breathing.

There are five steps in the Small Universe, which are:

Because we use four steps instead of five, we take a shorter time. Long Breathing and Forceful Small Universe take the longest time of the 4 or 5 stages of Small Universe.

A practitioner usually takes about 10 years to attain the Small Universe. He usually uses Abdominal Breathing. Chi fills up his "dan tian", sinks into his "hui-ying", goes up his spine passing through "min men", "ling tai" and "yu jing", arrives at "bai hui" at the top of his head, and comes down the front part of his body completing the small universal flow.

You take only five days to learn the techniques of the Small Universe. You will take a few months to attain the skills and complete the small universal flow.

We have been preoccupied with raising our children. But we are aiming to grow our student numbers in the fall. We are hoping to open our own kwoon in a year or two.

Your husband and children come first. Opening your own kwoon (school) and spreading our Shaolin arts come later. This is our Shaolin Wahnam teaching.

When you open your own kwoon, you must make sure that the money from your fees is much more than the money you spent for the kwoon. Helping others is great, but it must never be a financial burden. You should also teach deserving students. Charging high fees is one effective way to do so. 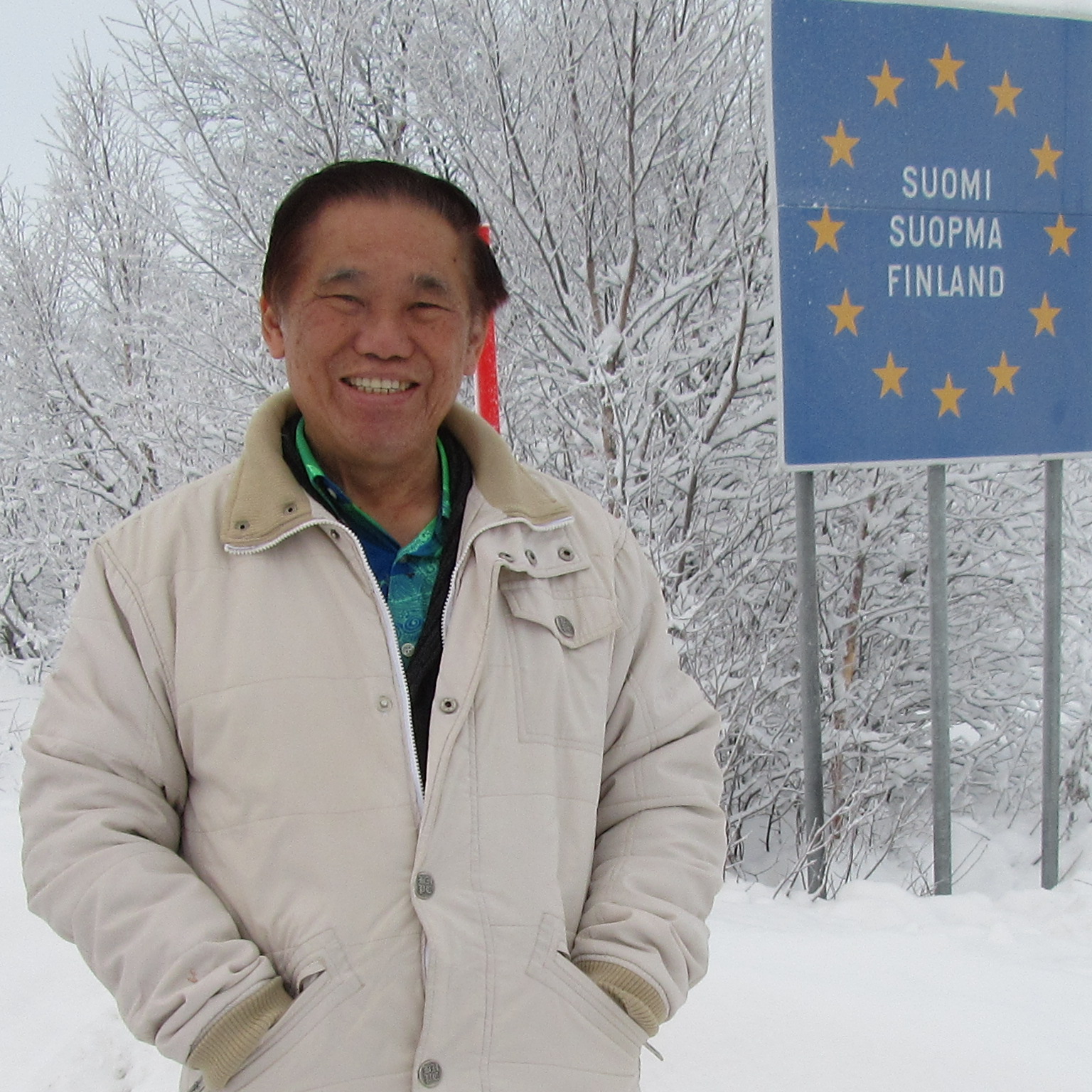 The northern most part of the European Union

Our baby Noa is very healthy and happy, and is growing very well. I hope that once he is a little bigger we can come to Malaysia again.

All your children will be happy and healthy. They are chi kung babies.

You and Markus are of course welcome to Malaysia any time. I still remember fondly the time we spent in Finland. Simu still talks very fondly of seeing the mid-night sun. Markus took me to the most northern part of the European Union, as well as the most southern part of Finland where there was a lot of snow.

Even though I have had my third child and I am over 40 years old, I still feel I get healthier the older I get. I am very grateful for these Shaolin Arts I have been able to learn from you.

It is no surprise that you and Markus get healthier as you get older. We all practice Shaolin chi kung. I know that many people look older than me, and many of them are quite sickly, though they are actually younger. 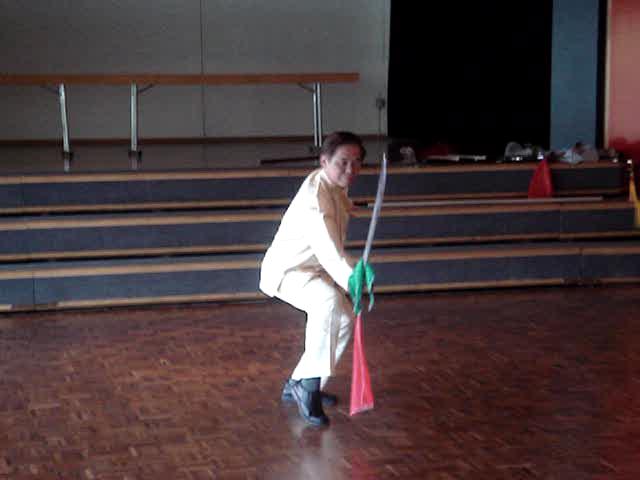 People can benefit from our Shaolin Wahnam arts so much. The majority of people here view Taijiquan as merely a slow gentle dancelike sport, and are not easily ready for the practice we actually teach.

Taijiquan, including the Taiji Sabre, is a wonderful art. Today, especially in Finland where people abide by laws, practicing Taijiquan gives us more benefits in terms of health, vitality, longevity, peak performance and spiritual joy than practicing chi kung. Of course practicing chi kung gives us a lot of benefits. It is one of the best things anyone can ever do.

I have been teaching my Taijiquan students the Taiji Sabre now and it has been very enjoyable. The waist rotation and force from the waist is very apparent in the Taiji Sabre set. Sifu, is there a special use for the patterns "White Tiger Lifts Head" and "Seven-Star Sweep Leaves"?

Waist rotation is very important in Taijiquan. It is a core principle of Taijiquan mechanics, and is one of the two reasons why Taijiquan is suitable for combat against bigger and stronger opponents. The other reason is internal force.

"White Tiger Lifts Head" (Pattern 11 of Pattern Names of Taiji Sabre) is for chopping an opponent vertically. It is important to lift up the sabre after chopping, so that the opponent's weapon like a Trident could not trap the sabre.

In the past when a sabre was heavier, and some people wore armour, the sabre could chop through the armour. In the pattern shown on my video, we use a False-Leg Stance, but in application any stance can be used. An exponent in the past could be on horseback, and he could use a long, big blade.

"Seven-Star Sweep Leaves" (Pattern 22 of Pattern Names of Taiji Sabre) is used to diagonally chop an opponent's lower body, like his legs. The stance, especially in Praying Mantis Kungfu, is called "Seven-Star Stance". It is used not just against one opponent, but against many opponents. When the hand is held in a "yang" way, like Pattern 32 of Plum Flower Sabre, it is called "Whirlwind Sweeps Leaves".

The names of the patterns are used in our school. The names are also used commonly. In some schools the same patterns may be given different names, or the same names may be used for different patterns.