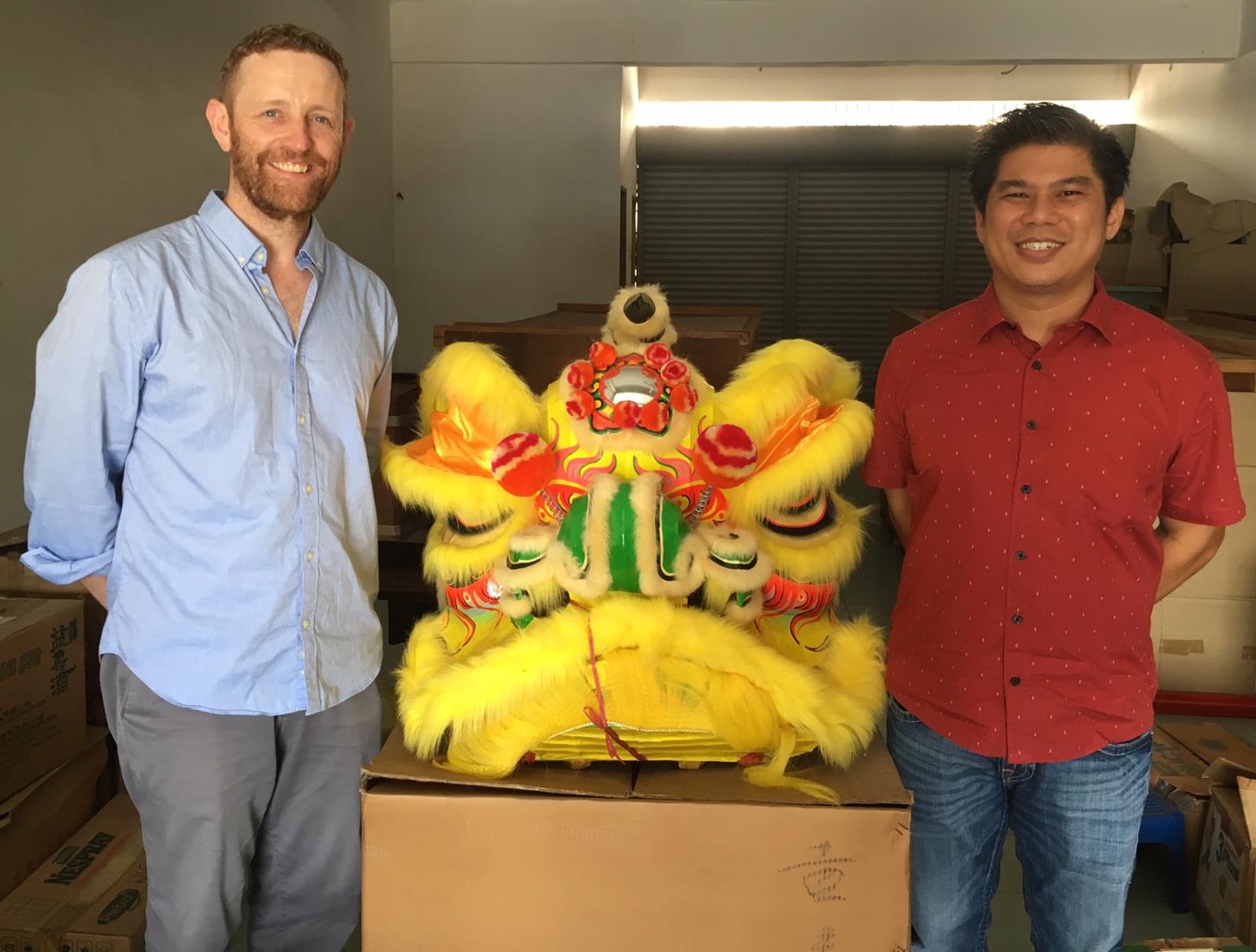 I hope to be a better son.

Being kind to one's parents is a wonderful thing. Be kind to them when they are still in this world.

Actually to be kind to one's parents is for the son's or daughter's benefit. But as students of Shaolin Wahnam, we are righteous, and do not think of the benefit which will come nevertheless.

I am wary of over-training but I am in touch with kungfu. I practiced One-Finger Shooting Zen and I felt force building at my finger. This was surprising as I thought I had been retrogressing. I also practiced Cotton-Palm and felt my palms quite charged and hot. My palms were somewhat red -- this also surprised me. I hope to make Sifu proud.

I am already proud of you.

Your kungfu is certainly better than many real masters. You are developing in all aspects. What you thought was "degradation" was a "plateau", and the "rise" will come when you put your kungfu in action. 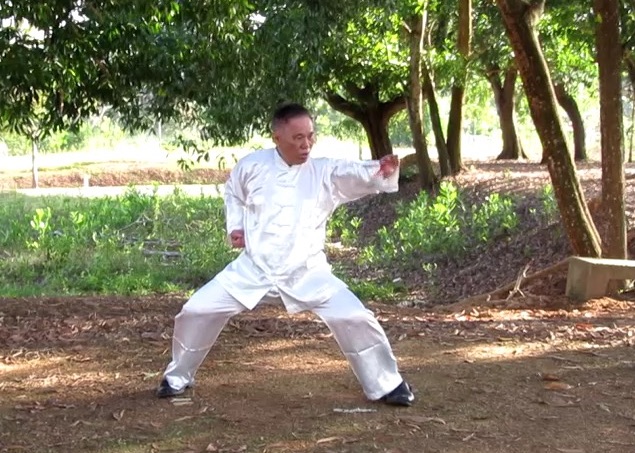 This PhD has been much more time consuming than I anticipated.

Although I have not seen your Ph.D work, I believe you are better than many Ph.D holders.

Most people cannot relax and be focused, and have no internal force and mental clarity, especially professors who have too many thoughts crowding their heads.

Opening the baihui is part of the standard procedure for Induced Chi Flow. But the chi flow that I experience simply when I stand still and relax my mind or when I perform one or two exercises like Lifting the Sky or Circulating Head is very similar though I do not open the baihui as when I perform Induced Chi Flow. If the energy flow is strong enough, can chi be blocked at my head? Is it a good idea to open baihui before starting exercises once your chi flow is strong even if you are not performing Induced Chi Flow specifically?

There are many ways to induce chi flow. The most important are to be relaxed and to be focused. Many people fail in doing these two very important things, and think they are practicing chi kung when they only practice physical exercise, just as many people think they practice Taijiquan, which is a wonderful martial art, when they perform only external Taiji forms.

If the chi flow is strong enough, it is not necessary to stimulate the "baihui" energy point which is found at the top of the head. Stimulating the "baihui", which will open the energy point, is to encourage stronger chi flow. 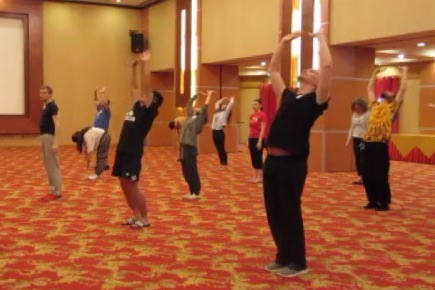 During the course (Intensive Chi Kung Course, 3-7 Dec 2019), when we were learning and practicing Cosmic Shower you talked about cleansing and nourishing of the mental dimension and about how to change mental patterns and wrong views. It was very interesting but at the same time I have the impression that I missed something. Could you please elaborate on this subject?

Many of us may not realize how much our mental blockage is, or perverted views are affecting our daily lives.

If he is not happy in his workplace, he should be the one to make changes, or to change problems into opportunities. He should make sure that he fulfills all his duties, then he should be better than his work-mates, not for competition but that is his work which his boss pays him well to have a comfortable life and to shelter his family, if he has one, at night. Better still, he becomes his own boss, but he should always be grateful to his former boss.

As you advised me, I'm circulating my Small Universe and I can feel much better the spontaneous flow in the head and down the body and also energy nourishing my Bai Hui. Sometimes, when building, I feel pulsations on the top of my head. During the course you also advised me to circulate the Small Universe so as to convert energy to "shen". What's the best form to do it?

Many chi kung practitioners consider the Small Universe a must for chi kung. Unfortunately most practitioners just perform outward forms. Feeling pulsations at "bai hui" is a sure way that "chi", or "qi" as it is spelt in Romanized Chinese, has reached the head, which is also the pathway of energy flow along the "ren" and "du" meridians of the Small Universe.

In Taoist chi kung, there are three major phases, namely converting "jing" (or substance) into "qi" (or energy); converting "qi" to "shen" (or spirit, not the lesser spirits like ghosts, but the person's spirit or consciousness); and returning "shen" to "xu" (or the Great Void, or everything there is). I shall list the three phases, which will take a whole lifetime, or many lifetimes, for the lucky persons, as follows:

You are at the second phase, i.e. changing "qi" to "shen". While we live in the phenomenal realm, it is one of the best things anyone can do. As a result, you will have better "shen" or spirit or consciousness. Your "shen" is already very good, but it will even be better.

Here is the gist of converting "qi" to "shen".

Just perform the Small Universe as you learned it from me. Basically there are 5 stages:

Abdominal Breathing is the method people with genuine Small Universe practice, but they have to practice for about 10 years. Looking back, my sifu, Sifu Ho Fatt Nam, sped up the process with Long Breathing and Forceful Small Universe. I took about two and a half years to have my Small Universe.

Those who attended my Small and Big Universe course took only 3 days, but they must have sufficient "qi" at their "dan tian" from regular practice. I used the sufficient "qi" to facilitate the techniques. 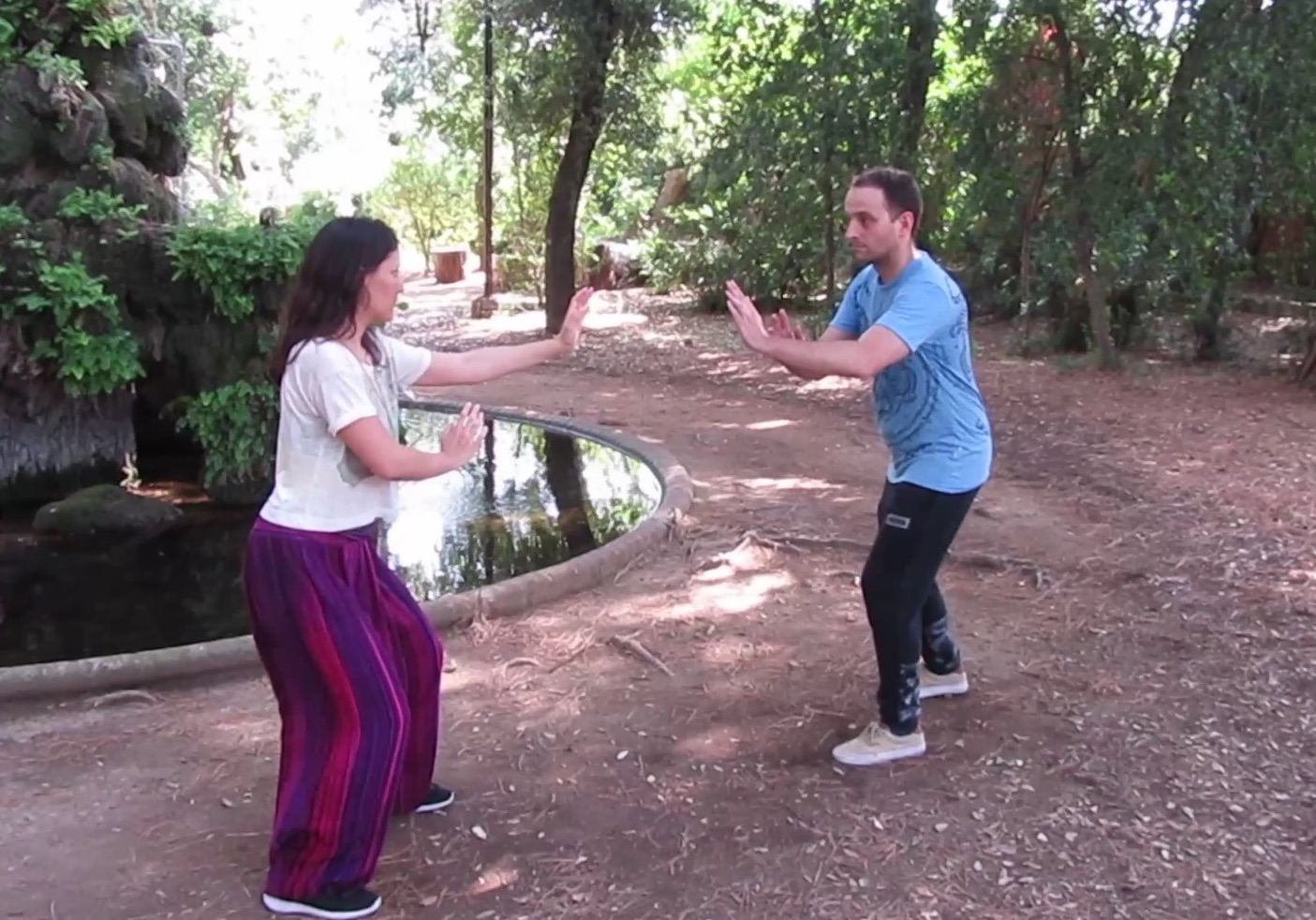 Angel and Paz at a kungfu course in Barcelona

Today, in the return flight from Malaysia to Spain I had a very nice experience.

I opened my Bai Hui to have a Cosmic Shower and I felt my energy circulating down my body to Hui Yin to inside my legs and feet and from there the energy started to go up very flowingly and nourishing everything in my body until reaching my head. I perceived this is the Big Universe.

I intuitively interpreted it as the wondrous meridians from my legs to the body opening and accumulating energy, my Small Universe got enhanced at that moment spontaneously too. After this experience I felt very good along all the trip.

Sifu, do you think that my intuitive interpretation was right?

Your interpretation is right.

Meanwhile, here is the gist. Transcendentally, everything is energy, or consciousness. But phenomenally we see this energy according to our sense organs, especially our eyes and our minds. A human will see the same energy very differently from an amoeba, or a one-cell creature.

The Truth is to be released, or liberated, from our physical bodies to be with this universal energy, called differently according to different cultures as returning to God the Holy Spirit, attaining Buddhahood, achieving the Great Void, or whatever terms we call this highest achievement.

This is attaining the spiritual Big Universe, when we are ready but phenomenally we have a glimpse of this universal energy. We also realize that our spirit never dies.

I have found an interesting article on Zheng San Feng and the origins of Taijiquan, which I am referring to you for review.

There are too many factual accounts in the article. The Chinese, as in Taijiquan Treatise of Zhang San Feng, value practicality and not just facts.

Here lies a main difference between Western culture and Chinese culture. The West value facts, whereas the Chinese value practicality.

Zhang San Feng developed Taijiquan at the Shaolin Monastery at Henan, and Taijiquan brings good health, vitality and longevity. Most people, however, practice just the external forms, which we call Taiji dance, and they do not realize it. At the monastery, it was not called Taijiquan but called Shaolin Kungfu.

Zhang San Feng was the first person to synthesize physical kungfu, energy work and training of the spirit into one unity. He was inspired by a fight between a snake and a bird. Some people said the bird was a sparrow, but a sparrow was too small to fight a snake. I believe it was an eagle, as some texts described.

To differentiate between the style of kungfu at the two places, people called it Henan Shaolin at the monastery, and Wudang Shaolin at the Wudang Mountain where Zhang San Feng spent his hermit days. When Chen Wang Ting used Taiji philosophy to describe Wudang Shaolin Kungfu, later people called this style of kungfu Wudang Taijiquan. Chen Wang Ting is regarded as the First Patriarch of Chen Style Taijiquan, which is "hard" but flowing like Wudang Taijiquan.