I hope you enjoy the video, Sifu. It is an impromptu way to show Sifu that we are enjoying our time the Wahnam way.

Thank you for your email and video.

Your video shows you enjoy yourself the Shaolin Wahnam way.

In Shaolin Kungfu, we seldom kick high. If a kick is high, like jumping up to kick at the throat of an opponent as in "Swallow Flying through Clouds", the non-kicking leg protects the groin.

There is a kick in Shaolin Kungfu known as "Kicking the Sky". It is used in special occasions like when an opponent is jumping down at a higher level to the practitioner.

High kicks are used in Taekwondo. It is reminiscent of Korean patriots on foot jumping up to kick at Samurai warriors on horses.

I would like to thank you for this manuscript. It's pure gold and I still can't believe that Sigung offered something that special totally for free!

I was searching for many years, reading different books and tried to understand the meaning of all poetic descriptions. With every new book I was more and more confused and unsure.

Literature (the topic mentioned in the manuscript above) was my favourite subject in school. I won a few prizes and scored "A" in my Cambridge School Certificate.

One of the highlights while teaching in schools was that my students passed with credit in literature. It was quite an achievement as many of my students were Malay, and literature was not their strong subject. I must have inspired them in my teaching. 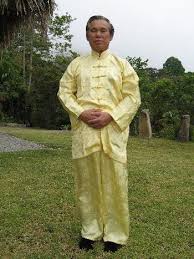 At the moment it is just to sit in half lotus and the Small Universe starts automatically. It's pure pleasure, while energy flows slowly around the body, and after a short while everything disappears and there is only pulsating dan tian.

It is great that you are enjoying your chi kung practice everyday.

The Small Universe, regarded by many as the pinnacle of chi kung, gives practitioners good health, vitality, longevity, peak performance and spiritual joys.

It is wonderful that "everything disappears and there is only pulsating dan tian".

I am used to tell my students that they don't need to worry about choosing the best exercise, as it is the chi flow that brings the effects of their practice. However, I usually also imply that choosing an appropriate exercise might speed up the cleansing process.

I joined the school at 15 minutes per session and now we have 10. Where would you start with your first chi kung students?

I feel that we have progressed tremendously and at a very high level. Leaving aside gentle physical exercise, form demonstration, and generously bashing each other in sparring, and consider genuine chi kung and genuine kungfu, we still progress tremendously and at a very high level. When I was a student, chi kung and kungfu took years. Now our students taught by me in intensive and regional courses take hours.

The 10 minutes per session is for advanced chi kung students. For our fresh chi kung students at the beginners' level, we can take a few months. It is still very fast when others take years -- if they are lucky to practice genuine chi kung.

For the first few months, we start with form. Gradually they go to energy and mind.

When I first taught chi kung about 40 years ago, students took about 4 months to generate an energy flow. That was very fast.

It is very important to differentiate between my intensive and regional courses and your regular classes. One major reason that causes over-training is a failure to make a difference.

Our students are very lucky. They can afford to have the three golden rules of practice, namely (1) not to worry, (2) not to intellectualize, and (3) to enjoy the practice. The fundamental element is chi flow. 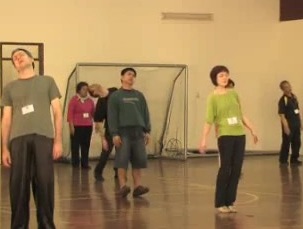 Let's say a Shaolin Wahnam student with a blockage in the kidney system randomly practices various exercises, followed by chi flow, and overcomes the problem.

How long would it take him if he practiced a relatively inappropriate exercise, like "Turning Head"?

It depends on various factors if our student has chosen the best exercise compared to another student who has chosen a poor exercise, but the latter student also practices the three golden rules and has a chi flow.

The difference is not much. Even if he had chosen a poor exercise like "Turning Head" for a kidney problem, so long as he practices correctly, follows the three golden rules and has a chi flow, his kidney problem will be overcome, and he will have good health, vitality and longevity.

Some of my classmates and co-workers have mentioned that when I work in the emergency department, they feel more confident that things will go better. I feel that this may be due to my Cosmos Palm practice, and I am thankful everyday for you teaching us that art.

"Being accomplished in the Shaolin arts is better than changing stones to gold by touch". I am happy that your presence in the emergency department of your hospital has brought much confidence to other people.

The Cosmos Palm is a very special art. It was a wonder that Matt suggested it, and I am glad that you were at the course. There are many benefits of the Cosmos Palm, many of which you may not be aware. For example, it has greatly helped me to help others to overcome so-called "incurable" diseases.

Should the Seven Star stance be held as static zhan zhuang for a certain period of time, similar to our Unicorn or Horse Riding stance training? Is there a particular way to measure progression in Seven Star training, such as the height of the jump, the distance traveled with the jump, or length of time spent in the stance?

The Seven-Star set is famous for its jump. When my sifu taught me the jump, I was quite accomplished. I was then an assistant instructor helping my sifu teach at the Kwangtung (or Guangdong) Association in Kuala Trengganu, Malaysia.

I remember I thought when would my sifu teach me the next step to complete the set. Learning sets was, and still is, the norm in learning kungfu. My sifu just left me to practice the jump, and he merely walked away.

But I was a very good student. I did the Seven-Star jump for a few months! Someone else would have learned a kungfu set. On hindsight, my sifu left me to develop agility -- not just physical agility, but also intellectual agility.

In training the Seven-Star jump, a participant thrust out his palm-thrust and jumped back into a seven-star stance (which is a low Unicorn Stance touching the ground. It is different from the Seven-Star Stance of Praying Mantis Kungfu). At first the jump was linear, but later it can be of any direction.

The palm-thrust should not be held as static zhan zhuang; as soon as the palm-thrust is made, the jump is executed back into the seven-star step.

There was no mention of the height of the jump, the distance traveled, and the length of time spent in the stance. My sifu just left me to practice on my own. He didn't even look at my jump.

In my sifu's school, not all students learn the Northern Shaolin Seven-Star set. As far as I can remember, only Poh Kai (who put me out of action for six months) learned the set.

Also, in Sigung Ho's school, did all of his students learn Northern Shaolin Seven-Star, or was it considered a specialized set for specific students? Did any of Sifu's classmates also learn Seven-Star?

Among the empty hand sets that Sigung Ho taught, such as Cross Road at Four Gates, Great Majestic Set, Big Bell Lohan, Shaolin Pakua, and Monkey, where did Seven-Star fall in terms of overall level?

Everyone learned "Four Gates". It was the fundamental set at the Shaolin Monastery at Quanzhou in South China. Everyone also learned the various patterns that form the Great Majestic Set.

I believe my sifu did not mention that the various patterns form the Great Majestic Set. It was told to me in private.

Many people learned the Pakua Set. Big Bell Lohan was a specialty. Por Lor, who was quite close to me, learned it.

The Monkey Set was my sifu's specialty. I only saw it demonstrated once. My sifu's friend, who was very close to him, said that was the only time he saw my sifu demonstrate it.

The Seven-Star set was a specialty. I would place it after Four Gates, Great Majestic Set, and Shaolin Pakua.