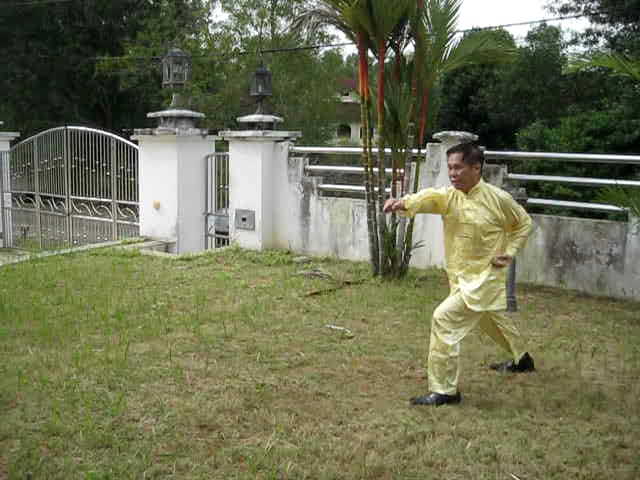 "Crossroads at Four Gates", the legendary set at the Shaolin Monastery at Quanzhou

We have a wonderful set in our basic Kung Fu syllabus called "Crossroads at Four Gates".

Crossroads at Four Gates was the first kungfu set I learned from my third sifu, Sifu Ho Fatt Nam. It was the kungfu set practiced by our patriarch, the Venerable Jiang Nan at the Shaolin Monastery in Quanzhou, Fujian Province in south China about 200 years ago. My sifu taught me "Lifting the Sky", "One-Finger Shooting Zen" and then this kungfu set.

This set was suggested by Andrew (Sifu Andrew Barnett of Switzerland). It trains stances and bridges (or the forearms), and is very effective in using "one hand against two". Interestingly, it corresponds closely with the Shaolin Murals at the Shaolin Monastery, which indicates hiding secrets in the open. You can read Shaolin Kungfu Now and 500 Years Ago for details. 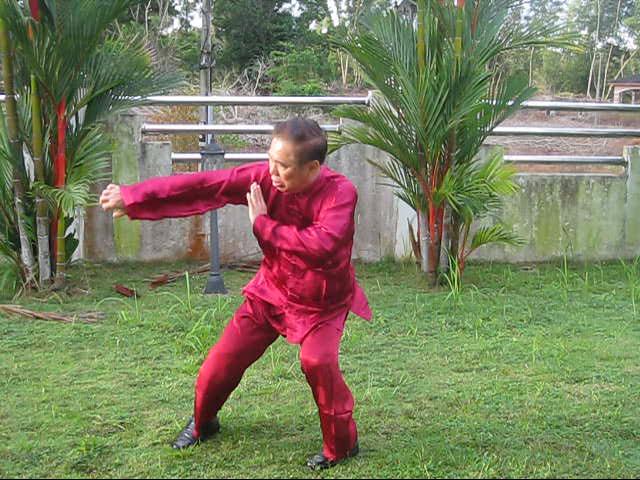 The Buddha has said that suffering is a part of life. Our arts should enable us to live a healthy and happy life. However, each of us will face difficult and sometimes painful situations in our lives. What are your strategies for dealing with difficult situations and how can our arts help us in our daily lives?

"Life is Suffering" is suggested by Marc (Sifu Marc Harnisch of Germany). In our phenomenal world, there is a lot of joy, though we realize that there is also a lot of suffering. There was no doubt that the Buddha's life was full of joy. His father, who was a king, forbid anyone to mention suffering in front of the Buddha.

We always have good thoughts. We abide by our Ten Shaolin Laws, and every time we practice our arts, we smile from the heart (which means the "mind" in classical Chinese), which sets our spirit free. In other words, we have morality and spiritual cultivation.

If we face difficult situations, a good strategy is to see the bright side of life, while we realize that there is much ugliness. It is good if a person practices chi kung; it is better if he practices kungfu. But if he (or she) doesn't, we let him live his life. For example, if a person is sick, which by itself is bad, we wish he will recover.

Personally, I don't have any problems as I always have good thoughts. I see problems as opportunities for improvement.

I wondered about the background of the 5 major family styles of Southern Shaolin.

The five family kungfu styles are Hoong, Lau, Choy, Li and Mok. Notice that I use the word "Hoong", and not "Hung" which is often used, because of mispronouncing "Hung" to rhyme with "rung".

"Hoong" is named after Hoong Hei Koon (Cantonese pronunciation) as most Southern Shaolin Kungfu practitioners speak Cantonese. Hoong Hei Koon taught what he learned from the Venerable Chee Seen (Cantonese pronunciation), the First Patriarch of Southern Shaolin Kungfu. I remember that my first sifu, Sifu Lai Chin Wah who is widely known as Uncle Righteousness, spoke to a group of students in his kungfu class. "Many people", he said "has asked me what kungfu we practice. It is Shaolin."

Hoong Family Style is as effective for combat as it is beautiful to watch. It is the style that is popular in our school, Shaolin Wahnam, characterized in our 16 Shaolin combat sequences. Its kungfu sets include 36- Pattern Tier-Crane, Triple Stretch, Flower Set and Dragon Strength.

Lau Family Style of Kungfu is named after Lau Sam Ngan (Cantonese pronunciation), which means "Lau Three Eyes". It was actually his nickname. During sparring with staffs with his sifu, the Venerable Cheng Choe which means "Green Grass", his sifu hit him on his forehead which remained as a scar. Lau Family Style is known for its staff.

Choy Family Style of Kungfu is named after Choy Pak Tat (Cantonese pronunciation). It is well known for its organ-seeking kick and whirlwind kick. Its movements are fast.

Li Family Style of Kungfu is named after Li Pa San (Cantonese pronunciation). Li Pa San was a disciple of the Taoist Priest Pak Mei, which means "White Eyebrows", and who was the founder of Pak Mei Kungfu, Ermei Kungfu (Ermei is the name of a mountain where Pak Mei stayed) and Dragon Style Kungfu.

A characteristic force training method of Hoong Family Style or of Shaolin is what we practice in Shaolin Wahnam, which is "One-Finger Shooting Zen". I learned "One-Finger Shooting Zen" from my third sifu, Sifu Ho Fatt Nam. My first sifu, Uncle Righteousness, used mainly the cup fist, dragon hand form, tiger claw and crane beak. Many practitioners from other Hoong Family Style and Nanquan in modernized Wushu use physical strength. 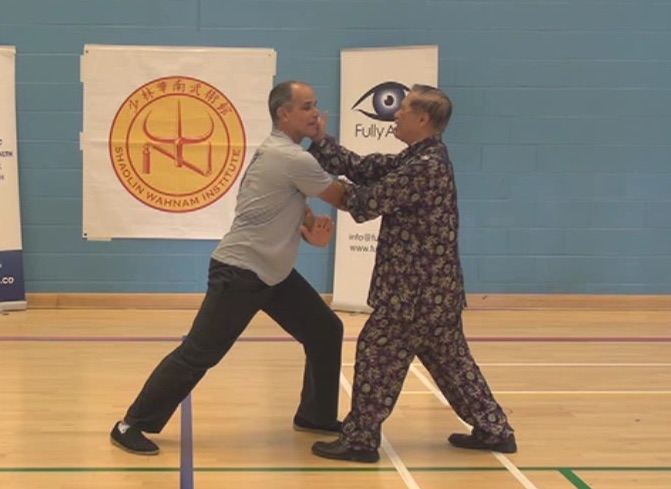 Would you please further elaborate on the differences and similarities of these styles in terms of force training, characteristic techniques, strategies and application, compared to what we practise in Shaolin Wahnam?

Is it correct to say that they are essentially the same, as they all originated from the Southern Shaolin Monasteries and the Venerable Chee Seen?

Do you know any sets of the Mok, Lau, Li or Choy Gar linages?

I was very lucky as I learned not only from Uncle Righteousness who originated from the Venerable Chee Seen, I also learned from my second sifu, Sifu Chee Kim Thong who was famous for internal force, my third sifu, the third successor from the Shaolin Monastery from Quanzhou who was also a specialist in the Monkey Style and of Northern Shaolin, and my fourth sifu, Sifu Choe Hoong Choy, a patriarch of Wing Choon Kungfu.

I may not know kungfu sets from Mok Family Style, Lau Family Style, Li Family Style or Choy Family Style, but the force training methods, characteristic techniques, strategies and application are similar between the Five Family Styles and Shaolin Wahnam as we originated from the Shaolin Monasteries form Henan, Quanzhou and the Nine-Lotus Mountain.

I am confident that this will find you happy and healthy. I wanted to reach out to thank you since the last time we corresponded.

I am very healthy and happy.

It is good that you are curious. You are welcome to ask me any questions. 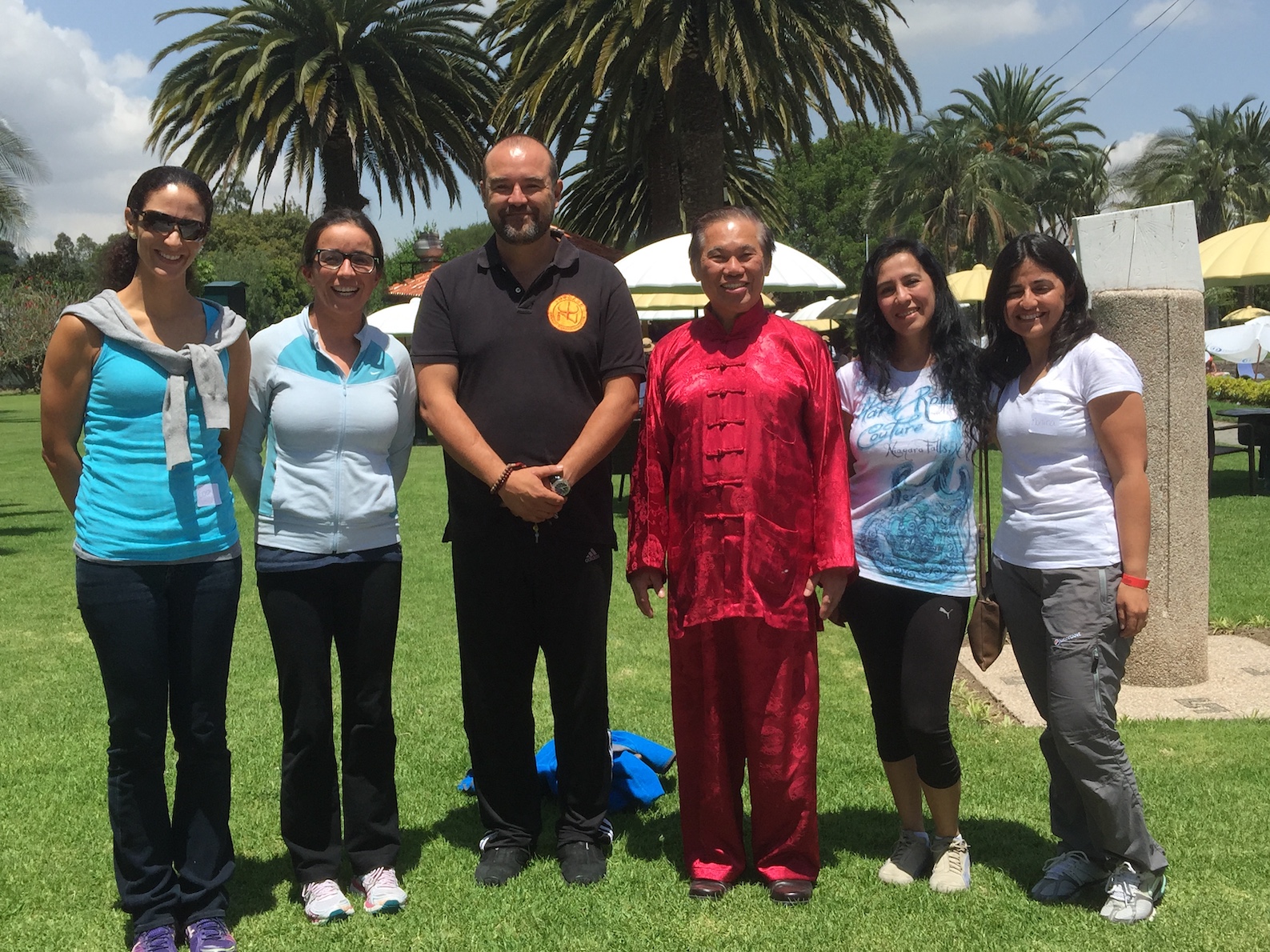 "Smiling from the Heart"

The marvels of Taijiquan astound. The feeling I have in my practice is that I wish to dedicate my life to the Wudang art, and I owe it all to you and your Shaolin Cosmos Qigong.

Taijiquan, especially Wudang Kungfu, is great. You have to practice the real art, which is what most people don't practice. There is nothing internal and nothing martial in the art practiced today. Taijiquan is a wonderful internal, martial art.

The book will show you how to get the other 90% of what most people practice today. I make an outlandish claim in the book. I claim that what most people practice is to get 10% of the benefits of Taijiquan. Please note that the "chi" in "Tai Chi Chuan" and the "chi" in "chi kung" are different. "Chi" in Taijiqun is spelt "ji" in Romanized Chinese, but "chi" in chi kung is spelt "qi".

I realised it was pain from the loss of my grandmother.

You had your grandmother for some time. This was a great blessing. Not many people have this blessing. You should be very happy.

Physical death is just a passage to another life. Even gods are in the phenomenal realm. It is a very large realm, and it is beyond our world.

U.K. (United Kingdom) is a lovely country. Many people would want to live in U.K. Amongst other things, it has education, science and freedom.

How is the best way to deal with grief and emotions that arise of losing a loving grandmother?

One of my strategies is to follow the Ten Shaolin Laws and have high moral values. I smile from the heart every time I practice our arts.

Hence, each time I practice our arts, I have high moral values and spiritual cultivation.

You lost your grandmother in this life, but having good thoughts of her makes a big difference. Thoughts are living things. You can think of her becoming a heavenly being, like a deva in heaven.