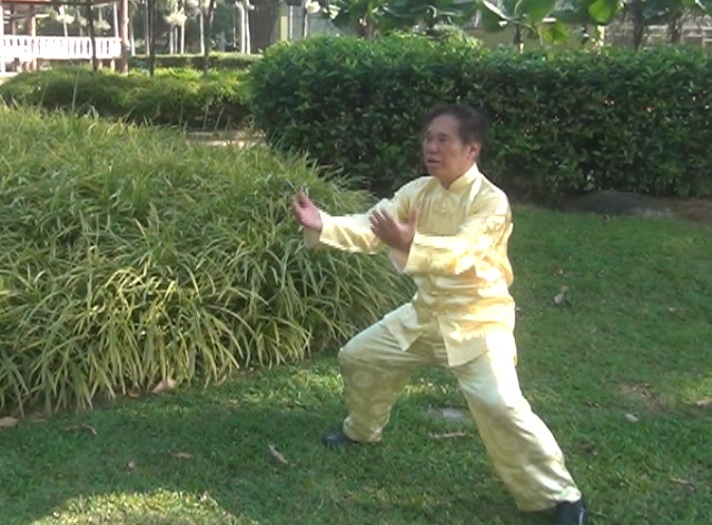 Thank you for your illuminating questions which will draw out secrets that many Shaolin Wahnam Family members in particular and others in general will benefit from. These questions also help me to crystallize my thoughts on Dragon Strength in particular and in kungfu in general, thereby helping our school to progress in kungfu philosophy, which in turn helps us to enhance our kungfu practice and daily life.

Unlike in the questions of other topics where I started answering after all, or at least most of, the questions had been asked, I shall start to answer your first question right away. This is because I love Dragon Strength very much, and answering questions on it will deepen my insight.

I am glad that many other illuminating questions have come up since yours appeared. They will also be answered fast.

Indeed, I have learned many kungfu sets. This is quite unprecedented. Most masters in the past practiced only a few sets. As revealed in some of my writings, many of these sets were my modifications based on expedient needs, and some were my compositions.

The Dragon-Tiger Set was composed very early, soon after graduation from Uncle Righteousness’ school. I composed it to teach a student as at that time I thought it might be inappropriate to teach any one of Uncle Righteousness’ sets without first seeking his permission. Later, after my kungfu “enlightenment” learning from Sifu Ho Fatt Nam, I used this set as a base for my first kungfu book, “Introduction to Shaolin Kung Fu”. Your sifu, Kai, who was already an international free sparring champion then, told me he was very surprised at the high-level combat application I described in the book.

Having learned so many kungfu sets enabled me, and subsequently our school, to benefit from breadth and depth. This again is unprecedented. In my own kungfu training, I focused on only one skill at a time. I remember that when I was training Tiger Claw under Sifu Ho Fatt Nam, I asked my sifu whether I could train two or three skills at the same time. My sifu told me to train only one at a time as this would give me more benefits.

But now our Shaolin Wahnam Family members can maximize benefits by training more skills at the same time. I also have worked out, from my understanding of kungfu philosophy as well as from our family members’ experiences, the reasons why this is so. As a result of this, our cost-effectiveness has become quite “frightening”. Others might not believe it but our family members can achieve in one month what past masters would need a year! It is now a joke that we have to tell our students to train less when other schools tell their students to train more.

Although Dragon Strength was Uncle Righteousness’ favorite, it was not well known. An important reason, I believe, is that the set is exclusive, and is not practiced by many people. Of his many sets, Flower Set, Triple Stretch and Tiger-Crane are well known, made famous by Ng Mui and Foong Sai Yoke, Sam Tuck and Hoong Hei Koon, and Wong Fei Hoong who practiced these sets respectively, though Uncle Righteousness’ 36-Pattern Tiger-Crane Set is quite different from Wong Fei Hoong’s 108-Pattern Tiger-Crane Set.

I did not have any special reasons at the time why I chose to specialize in Dragon Strength other than the fact that it was chosen by Uncle Righteousness to teach me, other than Tiger-Crane which was taught to all of Uncle Righteousness’ students as a fundamental set. On hindsight I would poetically describe the reason as divine guidance. I am happy that I have chosen Dragon Strength to specialize in as it has given me many benefits, some of which are not obvious to the uninitiated, in both my kungfu performance and teaching.

Towards the end of my kungfu training with Uncle Righteousness, he taught me Essence of Shaolin, which I believe was his best. While I love Essence of Shaolin, comparing the two I still prefer Dragon Strength. The reasons will become clear when I answer your question below.

In terms of philosophy, Dragon Strength is structured on developing internal force at the beginning, followed by combat application, whereas Essence of Shaolin is structured on performing the best 108 Shaolin kungfu techniques individually. Nevertheless, when one has understood the secrets of developing Dragon force, which will be explained presently, the whole Dragon Strength set is force training. Flower Set and Triple Stretch employ the structure of Dragon Strength, whereas 36-Pattern Tiger-Crane employs the structure of Essence of Shaolin.

A main reason, which came later after I had understood force training, why I prefer Dragon Strength to Essence of Shaolin is this structuring of the set. Force training enhances not just our kungfu but also our daily life, whereas the best Shaolin kungfu techniques are only used for combat which rarely happen in today’s law-abiding societies. Even for combat, the techniques are effective only when they are backed by force.

All the three fundamental tactics of combat – first defend then counter, defend-cum-counter, no defend direct counter – are found in both Dragon Strength and Essence of Shaolin as well as all other kungfu sets in Uncle Righteousness’ lineage. However, the emphasis in Dragon Strength is no defend direct counter. A Dragon Strength master can strike down an opponent as soon as the latter makes a move! If he is also trained to apply his kungfu philosophy and practice to daily life as in our school, he can solve a problem as soon as it arises. Indeed, looking back with hindsight, this particular skill trained in Dragon Strength has enabled me to make life happier for many people.

It is in force and other skill development that Dragon Strength is outstanding. It is also particularly in this respect that enables Dragon Strength practitioners to enrich their daily life.

One special benefit of questions and answers is that a master has to reveal secrets if he is to answer honestly questions asked inquisitively. One such secret is that the almost lost art of dim mark is found in Dragon Strength. Your sifu, Kai, is well known for dim mark. Do you know his special set? It is Dragon-Tiger Set, and the techniques of this set derived much from Dragon Strength.

As it is quite well known now, when I first learned Dragon Strength from Uncle Righteousness, I practiced it at a physical level. Not only I did not know its force development, I also did not know its combat application, other than straight-forward punches, kicks and blocks.

Not only I changed that situation after learning from my sifu, Sifu Ho Fatt Nam, I also used the benefits derived from Dragon Strength to enrich my daily life.

A main reason was due to sentimental value. Dragon Strength was the set chosen by my first sifu, Uncle Righteousness, to teach me, and which I had spent a lot of time practicing. Poetically it can be described as divine guidance.

Another reason was that the kungfu sets I learned from Sifu Ho Fatt Nam, though they gave me my “kungfu enlightenment”, were rather prosaic by comparison, excepts the Great Majestic Set which I learned not as a set but as individual patterns. At that time I was still enthralled by the demonstrative beauty of kungfu sets.

The third reason was that Dragon Strength provided an ideal vehicle for me to combine the skills I learned from Sifu Ho Fatt Nam with the forms I learned from Uncle Righteousness, my two teachers who contributed much of the teaching material in Shaolin Wahnam.

By that time I had learned San Zhan from Sifu Chee Kim Thong, and also various Wing Choon sets from Sifu Choe Hoong Choy. But my understanding of San Zhan at that time was limited. I thought, wrongly, that this set was only for developing internal force, which I fail to do at the time despite learning in a school famous for internal force.

Sifu Choe Hoong Choy “passed” each of the sets to me in a few days, instead of teaching me over a few months like a regular student. Rightly or wrongly, I regarded Wing Choon Kungfu as a supplement. It was later when Emiko suggested I taught a special Wing Choon course that I discovered the riches of Wing Choon.

The fifth reason was related to my study of kungfu classics. I read from Taijiquan classics that the highest attainment in Taijiquan is to use mind to lead energy flow, and to use energy flow to lead form. In other words, a high-level Taijiquan master does not use his muscles to perform Taijiquan, he uses his mind!

Although I do not fully agree with this opinion, as I believe that the highest attainment in Taijiquan is to return to the Great Void, i.e. return to God the Holy Spirit, like what Zhang San Feng did, I find the teaching inspiring. I tried it with Dragon Strength, and to my amazement it worked perfectly. Not only I was extremely powerful, I was also extremely fast. These skills will be taught at the coming Dragon Strength course.

The main difference between the version of Dragon Strength set I first learned from Uncle Righteousness and the version I now practice is that the early version was at a physical level and the version now is at the level of mind and energy.

To better facilitate energy flow, I changed holding the hands in close fists to holding them in open palms, especially at the first section of the set where Dragon force is developed.

The One-Finger Zen hand-form was found in Uncle Righteousness’ version. After learning from Sifu Ho Fatt Nam, I expanded this pattern into One-Finger Shooting Zen, and use both the right and the left modes.

I also added some patterns using the Four-Six Stance and the phoenix-eye fist which I learned from Sifu Chee Kim Thong and Sifu Choe Hoong Choy in Wuzuquan and Wing Choon Kungfu. Most of the patterns and their arrangement, however, follow the initial versions learned from Uncle Righteousness.

Thus, it can be concluded that the Dragon Strength set in Shaolin Wahnam represents the legacies of all my four beloved teachers. 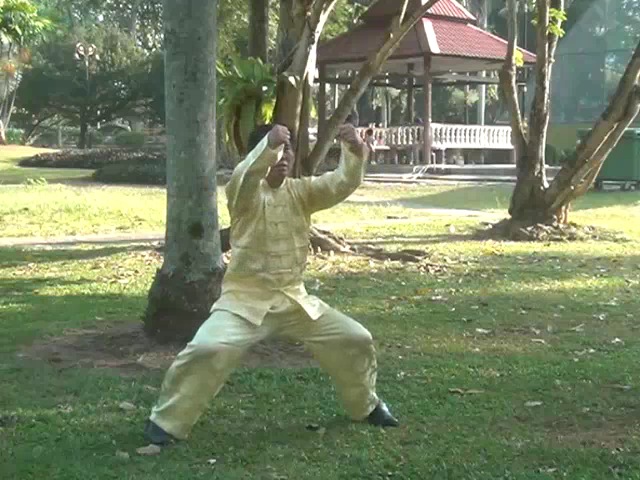 An old version of Dragon Strength performed at a physical level

The questions and answers are reproduced from the thread 10 Questions on Dragon Strength in the Shaolin Wahnam Discussion Forum.