THE SECRETS OF SPARRING METHODOLOGY 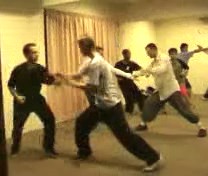 Why can't kungfu practitioners spar with kungfu patterns? There are many ways to answer this embarrassing, yet prevalent, question though the different answers actually point to the same reason.

Here are some common answers.

We in Shaolin Wahnam are grateful to our lineage of masters that we practice kungfu sparring.

Oddly, we are criticized for practicing kungfu sparring! Some common criticisms are as follows:

While we are not bothered by such criticisms, it is good to know them. They can, for instance, help us to examine our kungfu sparring from another perspective. Here are our brief answers to these criticisms.

It is also comforting to know that the above criticisms, though vocal, are only from a small minority. Many other people have written to thank us for sharing our sparring methodology — something that was quite unheard of in the past.

The video clips in this and other series show some of the lessons in our sparring methodology during the Intensive Shaolin Kungfu Course of September 2005. They also show some wonderful spiritual experiences. As usual, the videos were taken as the lessons were, and are released without editing.

You can also find invaluable information on sparring in the video series, How You Could Apply Taijiquan for Combat and Sparring Methodology

This is the third part of the Series. The other parts can be accessed by clicking on the following:

Flowing with the Opponent's Force 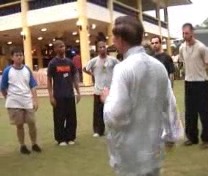 A big-sized student expresses surprise at the internal force of another student, which incidentally answers those who question whether the seemingly gentle movements in sparring are powerful enought for actual combat. Nevertheless, we minimize our force, instead of meeting force head on. We flow with the opponent's force.

The Importance of Right Spacing and Right Timing 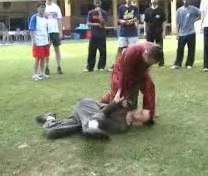 This is Sequence 7, “Chop the Hua Mountain”. Here, a new defence technique, “Bar the Big Boss”, is introduced. Grandmaster Wong also highlights the importance of spacing and timing. Charles moves in too close for his attack, and in an impromptu modification Grandmaster Wong fells him onto the ground. In another situation, if Charles moves too fast and too far away before Grandmaster Wong counter-attacks with a chop, Grandmaster Wong would change the chopping attack to a kicking attack followed by a palm strike and an elbow press.

The Necessity of Appropriate Stances 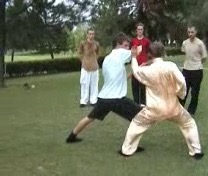 When the Soul reaches God 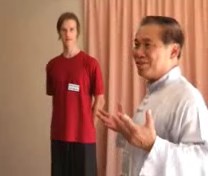 In a meditation session, the course participants feel an inexplicable sense of peace and happiness. Grandmaster Wong explains that the peace and happiness come from inside. It is because the chi flow generated by their practice opens their heart and sets their spirit free. When the spirit expands and be in touch with Cosmic Reality, or in Western terms when the soul reaches God, the spirit is spontaneously peaceful and joyful, because God or by whatever name we may call the Supreme Reality is peace and joy.

When the course participants are quite fluent in sequence practice, they progress to semi-free sparring. It is semi-free because although the movements are not pre-arranged, they can only use movements from a pre-chosen set of sequences. Here they can use Sequences 1 to 8, which employ hand strikes. Hence, there are no kicks, throws or grips in their sparring. As this is the first time they spar out of routine, the participants are still hesitant in some movements. With systematic practice, their movements will become spontaneous, as shown in later video clips.

Various Steps of Moving In 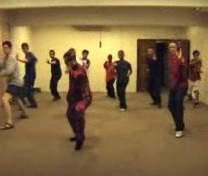 Participants learn to move into an opponent from different distances. They use one step, one and a half steps, two steps, three steps and four steps. The movement is from left leg mode to left leg mode. They may use any hand attacks.

Attacking an Opponent from Various Distances 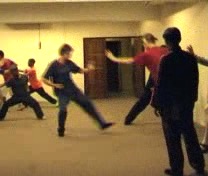 The participants move from left leg mode to right leg mode using various steps and using different hand attacks. Notice that they can now move in to attack an opponent regardless of whether he is just in front or stand across a room 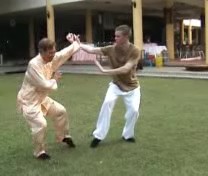 Grandmaster Wong highlights some fine points concerning the placement and movement of stances. Amongst other functions, a good stance enables the practitioner to avoid an attack without moving the feet, free himself from an opponent's immobilization, and prevents an opponent from kicking his groin

Internal Force and Kungfu Combat in a Few Days 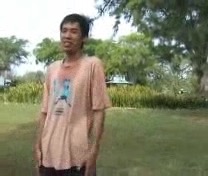 After some vigorous chi flow, Wei Joo says that he feels his breathing becomes quicker and believes something is coming out of his body. Grandmaster Wong explains that this is due to cleansing, not just physically but also emotionally. After attending an intensive chi kung course, Wei Joo requested permission to learn Shaolin Kungfu. As Wei Joo had no prior martial art experience, Grandmaster Wong asked him to learn some kungfu from a local instructor first. But he could not find a local instructor, so he learned from Sifu Wong's book. Yet within a few days of the Intensive Shaolin Kungfu Course, he could develop internal force and spar using kungfu patterns!

Making Leg Adjustment when Continuing into another Sequence 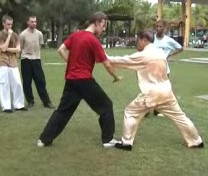 What would you do when you have completed applying one sequence but you haven't defeated your opponent? You could continue into another sequence. There is no problem if the leg mode in the last pattern of the first sequence flows naturally into the leg mode of the first pattern in the second sequence, like Sequence 2 continuing to Sequence 3. If the leg mode does not flow naturally, like Sequence 3 continuing to Sequence 2, you just make an adjustment. This video clip shows some examples.

Martial Sports may Not be Suitable for Real Fighting 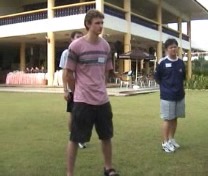 Martial arts that are practiced as sports may not be suitable for real fighting. It may be a big surprise to many people that Muay Thai, or Siamese Boxing, is one example. In a real fight if you held on to your opponent's neck and threw continuous knee jabs at his ribs, he might take out a dagger and pierce it into your liver. We would not do that to our opponent, but we must be prepared that an opponent may do that to us. Those used to martial sports with safety rules may neglect this important point in combat.

You can view the videos here