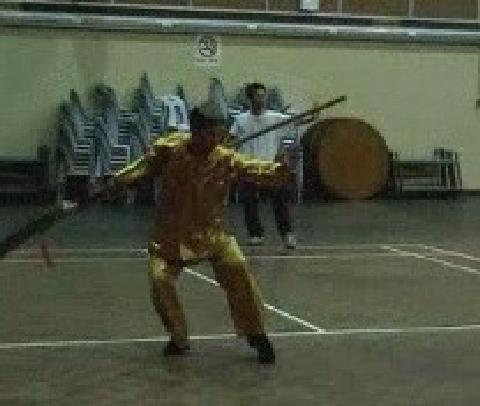 There are a few types of “Tai Tou” or “Big Knives”, and the one demonstrated here is called a ”Kwan Tou” (“Guan Dao” in Mandarin), named after the famous warrior of the Three Kingdom Period of Chinese history, Kwan Yu, who is worshipped as the God of Righteousness (but often mentioned in the West as the God of War). This particular Kwan Tou set is called “Green Dragon Crescent Moon Knife”, or “Cheng Loong Yim Yuit Tou”. Grandmaster Wong learned this set in his young days from his siheng, or elder kungfu brother, from the Uncle Righteousness lineage.

As the Kwan Tou is a long, heavy weapon, good stances and good force are necessary to use this weapon proficiently. When Grandmaster Wong applied force in a horizontal sweep while teaching it, the shaft broke into two. The bladed part of the weapon was then lashed onto another shaft. But when Grandmaster Wong later made a reverse sweep, the blade came out of the shaft. We regret that the set, therefore, had to be taught with an improvised staff acting as a Kwan Tou.