APPLICATIONS OF SPEAR AGAINST SINGLE KNIFE 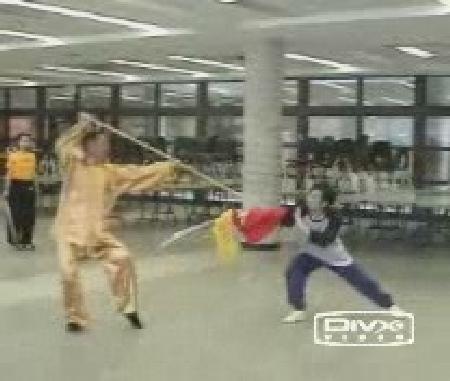 The application of the Single Knife against the Spear is shown in another video clip. This video clip, taken at random during the Special Shaolin Kungfu Course in Toronto in 2003, shows Sifu Wong demonstrating the spear technique against a reverse slash of a single knife. The spear pattern is called “Water Flows from High Mountain”, whereby Sifu Wong retreats his front leg into a False Leg Stance and simultaneously slicing the opponent's hand with the blade of the spear. 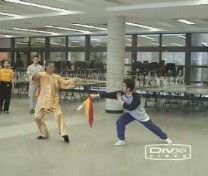 Not many people realize that the spear head is not only used for piercing, which is the most deadly technique of a spear, but also for slicing, which is also deadly. As Michael Chow attacks Sifu Wong with the slashing technique of his kungfu knife, Sifu Wong responses by retreating his body and slices at the opponent's eyes, throat or any other spots. This pattern is called “Phoenix Turns Head”. 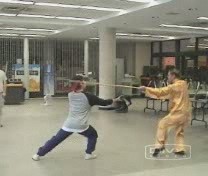 An obvious advantage of a spear over a kungfu knife is that a spear has longer reach. Making use of one's advantage is important and wise in combat. In this video clip, taken at random during the Special Shaolin Kungfu Course in Toronto in 2003, Sifu Wong demonstrates the use of this advantage over Michael Chow executing deadly slashing techniques of a kungfu knife. Good stances and footwork are necessary. 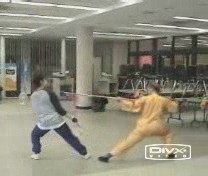 As the main advantage of a spear is its length, a knife-holding exponent would use various techniques to close in. Once he is close to a spear-holding opponent, he would have a big advantage. Here Sifu Wong shows how a spear-holding exponent can overcome this difficult situation. Using a pattern called “Sharp Knife Trims Bamboo”, Michael has closed in with his knife cutting into Sifu Wong's body. Without moving his legs, Sifu Wong leans his body fully backward employing the pattern “Bring Horse Back to Camp”, not only avoiding the opponent's attack but counter-attacking him at the same time. 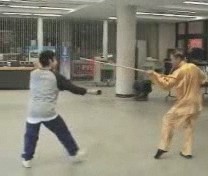 The “circle” is a very important spear technique that many students many not realize. Anyone hoping to use a spear efficiently should spend some time developing the skill of “circling”. Among many other functions, “circling” a spear helps to prevent a knife-holding opponent slices the spearman's hands. Another important function, as shown in this video clip, is to keep a knife-holding opponent at a distance. A third function, also shown here, is to confuse the opponent while attacking. 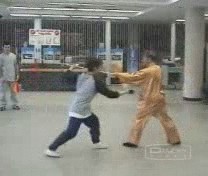 What would you do if your opponent grips the shaft of your spear? A good technique to counter this is the “circle”, which is a very important aspect of spearsmanship. Circles can be big or small depending on the combat situations. Here Sifu Wong uses a big “circle” followed with a “flick”, which not only releases the opponent's grip but also injures him. The two patterns employed to execute the “circle” and the “flick” techniques are known as “Han Xin Waves Flag” and “Sha Ceng Flicks Spear”. (Han Xin was a famous general; Sha Ceng was formerly a general in heaven but re-incarnated to accompany the great monk Tripitaka bringing back Buddhist sutras from India to China.) 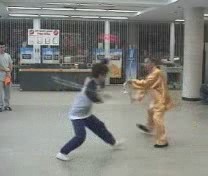 Spear against Single Knife from Wong Kiew Kit on Vimeo.