Participants to the Special Shaolin Kungfu Course of September 2005 in Malaysia had an experience of this process in kungfu development. They went over the combat sequences they had composed using patterns from their specialized sets. Then Grandmaster Wong helped them to refine their sequences.

Moving a Step Back for Better Advantage

Simon avoids a “skyward cannon punch” from Mark and applies an arm lock known as “Cross Hand Arm Lock”, which is also a variation of the pattern “Tiger Leaning on Wooden Door”. Sifu Wong explains that moving a step backward first before applying the counter is more advantageous.

Simon grips Mark's wrist. Mark releases the grip with a palm chop. Sifu Wong explains that it is necessary to turn the wrist before chopping. It is also advantageous to move a step towards the opponent.

Sifu Wong explains that Simon must position himself so that he will not be exposed to Mark's counter-strike as he locks Mark's arm.

Sifu Wong shows Mark that by means of a subtle snake movement he can release his arm from a seemingly unbreakable arm lock, and counter-strike. Mark and Simon then continue with their sequence composed with patterns from their specialized set, “Dragon-Tiger”.

Securing Advantages in Every Move 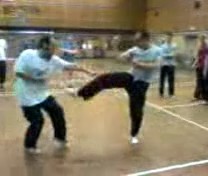 Joshua and Sifu Tim are refining their sequence against a Kick-Boxer. Sifu Wong advises Joshua to strike the opponent's leg at an angle to avoid the possibility of injuring his own knuckles, to hook the opponents arm to minimize his mobility, and to use his leg to control the opponent's leg as he falls.

Sifu Tim explains the philosophy for the choice of their patterns in the sequence, and won Sifu Wong's praise. Notice how Joshua controls Sifu Tim's arm, how Sifu Tim releases the control and counter attacks, but is hit unexpectedly by Joshua's Tiger-Tail Kick. 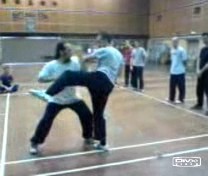 Next Sifu Tim and Joshua show and explain two other sequences they have worked out from their specialized set, “Shaolin Five Animals”. The two sequences incorporate some effective counters against kicks, and won applaud as well as laughter from the other course participants. 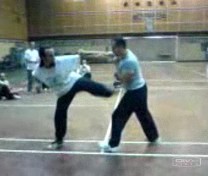 Sifu Tim and Joshua then explains some sequences against Boxers. First Joshua tempts the Boxer to move in, then counter-attacks with a side kick, using the tactic of “long against short”. Next Sifu Tim demonstrates the effective use of the “dragon hand” against Boxers, followed by kicks and felling techniques.

Counters against all the Four Categories of Attacks

Sifu Tim and Joshua go over the sequences they have worked out. They include all the four categories of attack — striking, kicking, felling and gripping — and their counters. The patterns are taken from their specialized set, “Shaolin Five Animals”.

Sifu Tim and Joshua then provides the philosophy behind the composition of their combat sequences. Understanding the philosophy, among other benefits, enables us to maximize results from minimum effort.