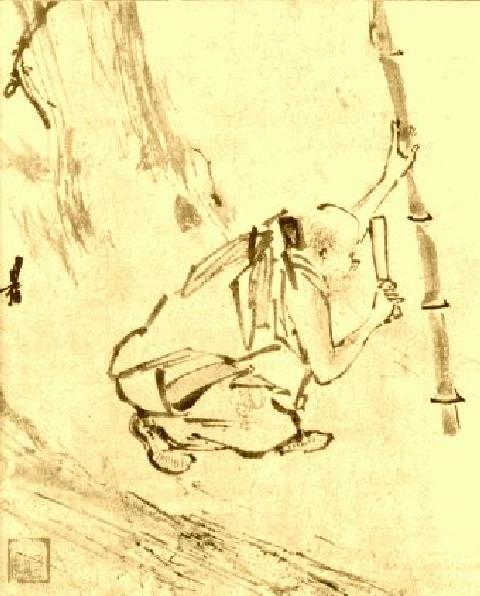 A famous painting by Liang Kai of the Six Patriarch Hui Neng cutting bamboo. This image is culled from http://oaks.nvg.org/hui-neng.html

Our Question-Answer Series is now 10 years old. We wish to thank all our readers for their continued support and encouragement. Our first issue can be accessed here and an Overview of all our issues can be found here.

I wish to thank you for your wonderful teachings in the “Art of Shaolin Kungfu”. After nine years of study I realized that the purpose of purifying the mind is to attain Enlightenment. I now understand that the essence of mind or Suchness is the real Buddha. Thanks to Hui Neng the Chineese Buddha and Fifth Patriarch. Once Suchness is known, one is free from delusion and one's mind is in a state of Thusness. Thanks to the Diamond Sutra of the Fifth Patriarch.

The Venerable Hui Neng, whose teaching is distilled in the Platform Sutra, is the 6th Patriarch. The lineage of Zen transmission is as follows:

The first three patriarchs stayed at the Shaolin Temple in Henan Province. The 4th Patriarch, Dao Yin, moved south to the Dongshan Temple in Hubei Province. Hui Neng moved further south to Guangdong Province and taught in nemerous famous temples, but his main base was the Baolin Temple.

The first three Zen patriarchs used the Lankavatara Sutra as the main text in their teachings. But the 4th Patriarch used the Diamond Sutra because it was already popular in the district where he taught. Both the Lankavatara Sutra and the Diamond Sutra were the direct oral teaching of the Buddha, and later written down in words by great masters. The Platform Sutra was the direct oral teaching of Hui Neng, and writtern down in words by his disciples.

I have a three year old spine/back injury. As a result my lower and mid spine are pulled off center, affecting my sciatic nerve and overtime became a problem for spine alignment. Is there a form of marital arts or qigong that can correct such a spine/back injury?

Yes, many of my students have overcome problems like yours. I shall describe just two case-histories, which were more serious than yours, one case many years ago when I first started teaching chi kung publicly, and the other more recently when I taught chi kung overseas.

Mr Chua from Malaysia, about 70 years old, had a spine injury that made him look pathetic. He was doubly bent. If you looked at him from one side, he was constantly bent forward at an angle of about 30 degrees at his upper back. He could never stand upright. If you look at him from the front, his body was constantly shifted to the right at the chest level.

At that time I taught chi kung in regular classes, i.e. once a week for a course of six months. My teaching then was vastly different from what and how I am teaching now. I taught many patterns, the Eighteen Lohan Hands, mainly at the physcial level, and students had to repeat each pattern many times. After repeating a few patterns many times for about four or five months, students were able to generate a chi flow.

To get the best benefit from my teaching, Mr Chua attended both my classes at Georgetown and Bukit Mertajam, though I taught the same material at these two towns. After completing one course, he would repeat the same course. He also practiced twice a day at home, as advised by me. His diligent practice paid off well. About a year later, his deformities disappeared. He became pain free and was able to happily stand upright.

This happened about 20 years ago, but I can remember his case very well. He is an inspiration. Not only he overcame his problems but he demonstrated great faith in the ability of chi kung to overcome what modern medicine considers an impossible task.

The second case was more recent, when my teaching methodology had improved tremendously. Over the years I improved from teaching 18 patterns in 6 months to teaching just 3 patterns in 8 hours, and students could generate a chi flow within the 8 hours instead of after 4 or 5 months as before! The speed-up was in the teaching. Students still needed to practice daily for a few months before their illness was overcome.

Many students overcame back and spine problems. One such student was Vincente from Servilla, Spain. His vertebrae were fused, and he could not turn nor bend his body. He moved like a robot.

Vintente attended my one-day chi kung course and went into vigorous chi flow movements that could have shocked his specialist doctor. While in chi flow he would bend forward and backward with sounds as if bones were crashing. Nevertheless he felt fine during the chi flows. After about 9 months his vertebra problem disappeared. He could move about like a normal person!

His doctor was surprised. She said that this could not happen, but it did, so she herself took a course from me to find out, and was much impressed. Needless to say, many of Vincente's friends who had similar problems took my courses too.

It is not a matter of right or wrong here, but a matter of choosing the best method for the purpose. If you are practicing a physical exercise, the way you punch is not wrong. Indeed, many martial artists, especially those who practice external arts, favor to punch the way you described because it gives them more reach and body weight.

But for internal force training, the method you described is not suitable because it obstructs smooth energy flow. The method we use in Shaolin Wahnam is like what I described in my books on "Thrity Punches" and "One-Finger Shooting Zen" where we do not move our body and do not raise our shoulder. This method enables internal force to flow smoothly from our "dan tian" to our punch or finger where we wish to explode force. 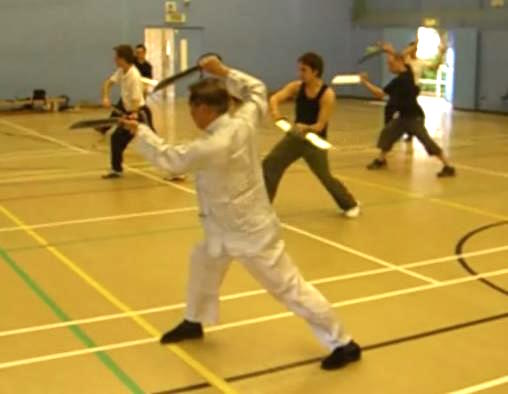 Rotating the waist is very important in kungfu movements. Grandmaster Wong emphasizes the rotation of the waist when making a cutting strike with the Butterfly Knives at the Weapon Course during the UK Summer Camp of July 2007

I find that not to let my shoulder move forward at all I have to lock my shoulder down and back by clenching my upper back muscles. Is this what I should be doing?

No, what you do here is not only incorrect but also harmful. Locking your shoulder and clenching your upper back muscles, or any muscles, cause energy blockage.

An internal force practitioner relaxes his muscles, yet he is very powerful. Indeed, the more relaxed he is, the more powerful he becomes. It is difficult for those not exposed to internal force training to appreciate this.

Is this just for the exercise or is this the way all punches should be performed in an actual combat situation?

We in Shaolin Wahnam perform in actual combat exactly the way we train. This is only logical.

It is ridiculous if you train in one way but use another way in combat. Yet a lot of kungfu practitioners, including some masters, are doing exactly this, i.e. they use kungfu techniques in training but use Kick-Boxing techniques in combat.

I have been taught before that to attain maximum power you should rotate your entire upper body. Do you not train that rotation?

If you are referring to internal force, you have been taught wrongly. Indeed, many practitioners, including some masters, have this mis-conception. They probably misunderstood two important principles in internal froce training, namely rotating the waist and exploding energy from the "dan tian". 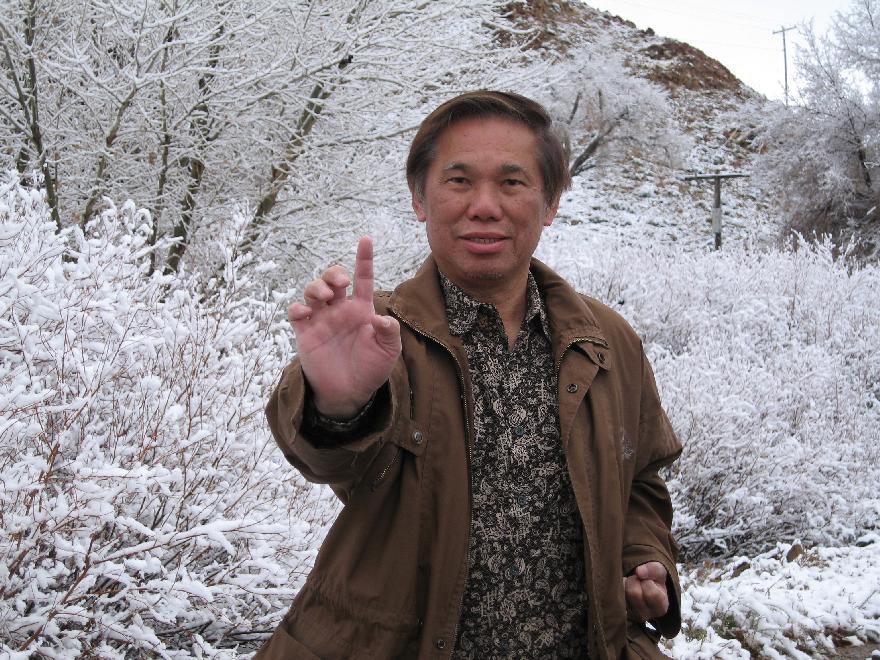 One-Finger Shooting Zen is a treasure of Shaolin Wahnam. During his US tour in December 2006 at the scenic Arches National Park in Moab Utah, Grandmaster Wong was inspired by the beautiful scene to perform One-Finger Shoot Zen in the snow.

In the case of One-Finger Shooting Zen, is it okay to let your shoulder slide forward as long as it does not raise upward?

I have clearly warned that internal force has to be learnt from a qualified teacher, and that practicing on your own without proper supervision is likely to bring harmful side-effects. Not only you do not heel my warning, you even change the training method I have mentioned in my books. You know that it is important not to move your body, yet you purposely move your shoulder forward. I would strongly advice you to stop training internal force on your own because the attitude you have is very likely to cause you a lot of trouble.

As a general rule, how should you carry your shoulders?

I suppose this is a confusing question because the shoulders can refer to more than one thing. I was told that you should sort of cave in the chest, and bring the shoulders to the forward side of the body like you are pushing a heavy object, but it is still possible to lock the actual shoulder joint back and down to prevent movement.

Yours is not a confusing question. In fact, it is very clear that you are heading for a lot of trouble if you cave in your chest and carry your shoulders forward like pushing a heavy object.