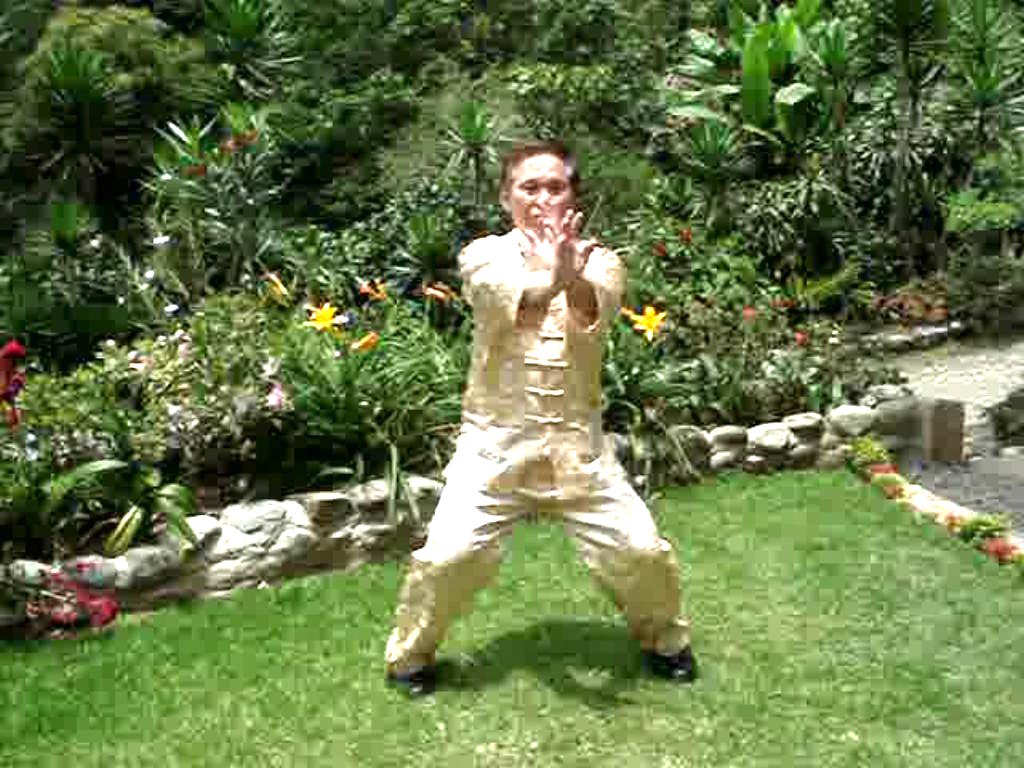 Sigung, a Wing Choon master has suggested that because there are no written historical records of Yim Wing Choon and Ng Mui, therefore neither existed. Can you please tell us your views on his claim?

This fact, i.e. recognizing Yim Wing Choon as the First Patriarch of Wing Choon Kungfu, is based on oral traditions. Indeed, in the history of Chinese martial arts, most things that are generally accepted as facts are based on oral traditions, though sometimes written records exist. For example, we believe that Bodhidharma taught the Eighteen Lohan Hands, the great Song general Yue Fei practiced Shaolin Kungfu, Zhang San Feng cultivated on the Wudang Mountain, Wang Lang founded Praying Mantis Kungfu, and Yang Deng Fu was the grandson of Yang Lu Chan because we trust oral traditions.

If someone, like this master, were to ask me, "How do you know that Yang Deng Fu was the grandson of Yang Lu Chan? Do you have any proof?" I would answer that I base my belief on oral traditions, which I trust to be true. I don't have any proof, and I am not going to waste my time investigating the proof even if it exists.

Many things we accept as facts are also based on oral traditions. For example, I believe that Rome was the capital of the Roman Empire, and that our earth is round. If this master were to ask me how I knew, and whether I had any proof, I would give the same answer, that I regarded these statements as facts based on oral traditions, and that I would not waste time investigating the proof even when it existed. I may add that he can choose to believe otherwise if he likes, and that is not my business.

This master claims that there are a lot of misconceptions regarding the origin of Wing Choon Kungfu leading to controversies about its forms, training methods, and combat applications. He also claims that his latest research shows this style was taught in a hall called Chi Sim in the Shaolin Temple, and that "Yim", which means "secretive", was added to make it "Yim Wing Chun" to indicate its secretive nature, and it was directly connected to the revolutionary societies, or the Hung Fa Yi.

I find the following reasoning about the origin of Wing Choon Kungfu interesting. Look at my Wing Choon lineage.

My sifu also knew that his sifu was Choe Onn. In this way we can trace to Yim Wing Choon. This reasoning is not a proof. It is an oral tradition, with each generation telling the next who the previous generation was.

The master you mention is probably sincere in his views. He honestly thinks that what most Wing Choon lineages accept as history, is not true in reality. What he does not realize is that he himself, not established Wing Choon history, is at fault.

There are many flaws in his claims. And these flaws are probably due to his not knowing that there are actually a few different types of kungfu called "Wing Choon".

Thirdly, there is a type of Shaolin Kungfu originated from the Ever Spring Hall of the southern Shaolin Temple. The Chinese (Cantonese) pronunciation of Ever Spring Hall is "Wing Choon Thien". The set taught in this hall was the Flower Set. Hence this style of kungfu is sometimes called Wing Choon Flower Kungfu.

Ng Mui and Miu Hein, the most senior and the most junior of the five Shaolin Elders, specialized in Wing Choon Flower Set. Yim Wing Choon learned this set from Ng Mui, from which she developed her Wing Choon Kungfu. Foong Sei Yoke and Wu Wei Thein, two young Shaolin masters, also specialized in this set.

I learned the Flower Set from Uncle Righteousness, and also from Sifu Choe Hoong Choy. The two sets, however, are quite different though having the same name. When a good opportunity arises, I shall teach this very special set in our school.

The master is also mistaken about "Chee Seen" (spelt as "Chi Sim" by him), "Yim" and the main style of kungfu practiced by members of Hoong Fa Wooi. "Chee Seen" was not the name of a hall in the southern Shaolin Temple. He was the abbot. "Chee Seen Wing Choon" refers to Wing Choon Flower Set taught by him at the Wing Choon or Ever Spring Hall of the Shaolin Temple.

"Yim" does not mean "secret". It is a surname. The main style of kungfu practiced by members of Hoong Fa Wooi, or Red Flower (Secret) Society who contributed much to Dr Sen Yet Sen's Chinese Revolution, was Choy-Li-Fatt, and not Wing Choon Kungfu. 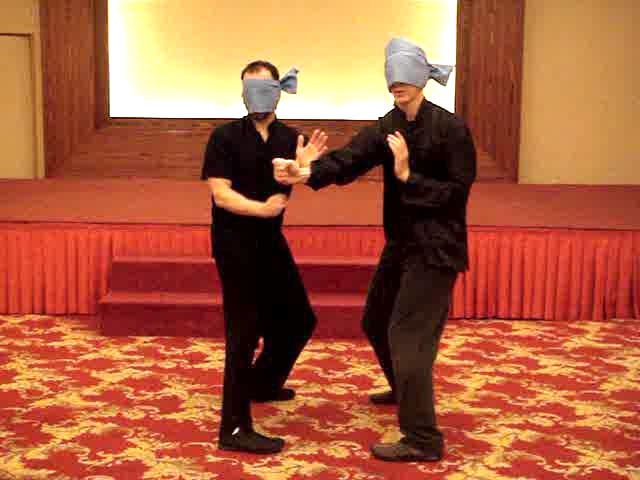 Was Wing Choon developed as the ultimate system to beat all others as suggested by this master, or was it first developed in the Southern Shaolin Temple as another specialty, and later further developed by Yim Wing Choon to suit her own needs?

None of the various types of Wing Choon Kungfu was developed with the sole aim to beat all other styles. The masters who practiced these various Wing Choon styles were not that egoistic. They also knew very well that it was skills, not techniques, that were more important in deciding victory.

The evolution of Wing Choon White Crane was due to local geographical and historical factors as well as expedient needs of the practitioners, just like any other styles. Wing Choon Flower Set was a legacy passed down by generations of Shaolin masters. Wing Choon Kungfu from Yim Wing Choon was evolved from the Flower Set according to her particular needs. She did not purposely set out to invent a new style.

How do the various Wing Choon styles differ?

While there are differences amongst the various types of Wing Choon, they are also similar in many ways. This was because of historical and geographical factors. All of them were from Shaolin, and were mainly practiced in Fujian Province.

Both Wing Choon White Crane and Wing Choon Kungfu from Yim Wing Choon use short stances, like the Goat Stance and the Four-Six Stance. Both also use the palms extensively. The stances in Wing Choon Flower Set are longer, with a lot of Bow-Arrow Stance. The Flower Set uses the cup-fist extensively..

Amongst the various styles of Wing Choon Kungfu from Yim Wing Choon, the differences are most noticeable between Yip Man Wing Choon on one hand, and all the other styles on the other hand.

While all the other Wing Choon styles have a wide range of unarmed and weapon sets, Yip Man Wing Choon is limited to the three sets of Siu Lim Tou, Cham Kiew and Phew Chee, and the two sets of long staff and Butterfly Knives. In Choe Family Wing Choon, for example, besides Siu Lin Tou which includes Cham Kiew and Phew Chee, there are also Flower Set, Essence of Combat, Battle-Palm, Choy-Li-Fatt, and Drunken Eight Immortals. Besides the long staff and the Butterfly Knives, there are also saber, spear, trident, Guan Dao, soft whip and kungfu bench.

Another noticeable difference is the stances. Yip Man Wing Choon mainly uses short stances, like the Goat Stance and the Four-Six Stance, whereas the stances in the other Wing Choon styles are extensive.

A third difference is the hand-forms. Yip Man Wing Choon uses mainly the cup fist, the palm, the finger-thrust and the elbow. The hand-forms in the other Wing Choon styles are more extensive.

In Choe Family Wing Choon, for example, the eagle-claw and the sword-finger are also found, indicating that chin-na and dim mark are also employed in Wing Choon. Wing Choon practitioners would be pleased to know that there is more in Wing Choon than what they initially thought.

On the other hand, the cup fist is not so frequently used. This may be a surprise to some people who have associated the cup fist as a typical Wing Choon hand form. It is used only once in Siu Lin Tou and Cham Kiew, but not at all in Phew Chee. 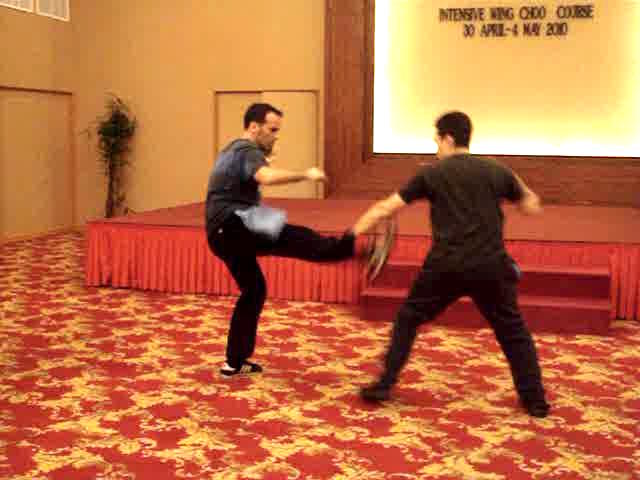 I want to learn Chi Kung for self healing, and to improve my eyesight. I injured my left eye 29 years ago. One year later, my right eye became affected. Today, my eyesight is very poor.

I am sorry to hear about your eye problems. We have a wonderful set of Shaolin Eight Exercises for the Eyes, which you can perform on your own. Please do a search on my Question-Answer Series to find out more information and how to perform the exercises.

Do you provide distant healing? If you do, I would be very grateful if you would send me some healing Chi.

I do not provide distant healing, though I sometimes transmit chi over great distance to save lives. After receiving chi from me, the student still has to perform his chi kung exercises. 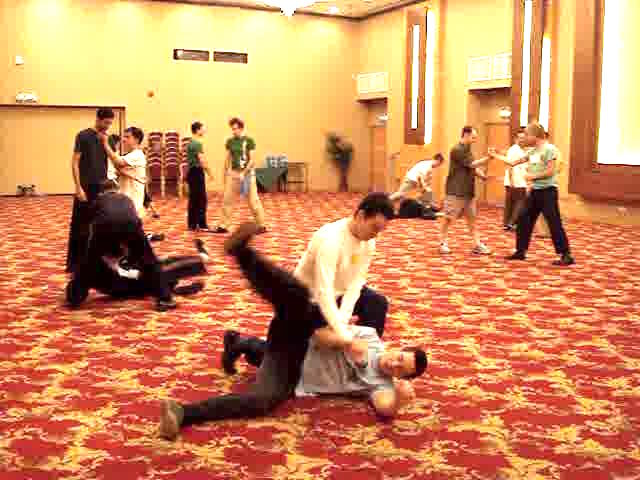 As a complete art, throwing techniques are found in Wing Choon Kungfu too

Thank you for coming to Ireland to teach Chi Kung. I hope you come to Ireland again next year. I will be there to do your course.

We have some excellent teachers in Ireland, including Sifu Joan Browne who is the Chief Instructor. Please see List of Instructors in Ireland for their contact particulars.

I teach in Ireland every year around Valentine Day, and the courses are organized by Sifu Joan Browne. Many people have benefited from our courses. I hope you will enjoy these benefits too.

You told me in a past correspondence that: "You don't have to intellectualize on what exercises are best for your results, or what would happen if you choose certain exercises over others."

I've been living up to this teaching as best I know how. I find Flicking Fingers is both more efficient (takes less time) and more enjoyable than doing Small Universe, or Medical/Spiritual Big Universe as we learned in the Small Universe Course. In fact it almost seems to combine the best of all three in one exercise!

I feel a little guilty or worried that I may miss something very important by not practicing these. I guess I would like to know that it is alright.

You are not only alright, you are actually doing very well. I am very glad of your results.

You have attained the formless level, which is a master's level. It does not mean that you have become a master, but it means that many masters would like to achieve what you have achieved but may still can't.

When I say that you have attained a master's level, I do not just consider that your practice can be formless. I refer more to the results that you get from your practice. Not only you are healthy and full of vitality but when you can open your heart and feel joy in simple things, you surpass many masters who are still angry and stressful despite many years of training and teaching.

"Flicking Fingers", or to give it a poetic name "Golden Dragon Taps on Earth" as Piti has suggested, is a very advanced, powerful exercise. When performed correctly at a high level, it activates all the twelve primary meridians.