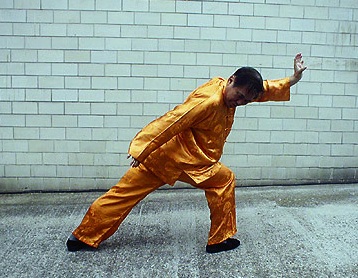 Green Dragon Presents Claws -- a pattern from the 18 Lohan Hands

During one session, I did Dantian Breathing, Forceful Small Universe and Gentle Big Universe. I closed my eyes, and saw a flash of light just for one second. I thought it could be a bird fly by.

I suddenly began to tense and squeeze my muscles. I tensed and squeezed so hard that I began to shout as loud as I could, and my body even trembled due to squeezing so hard. I also broke out in tears and cried loudly and very, very sadly. Even now, I can still feel the sadness. Even now, I feel pitiful towards the "me" who was crying at that time.

Seeing light is a common occurrence amongst our students, though in most other schools it is only experienced at a masters' level. Just enjoy the experience but don't worry or intellectualize on it.

It was probable that the tensing and squeezing were due to your cleansing some deep blockage caused in your past lives. You may not be aware of the blockage or the events that caused the blockage, but it has pervasive effects on you.

This may explain why despite being a cheerful person you are not as happy as you should be. After clearing this blockage you will find life more joyful. You don't have to do anything special. Just carry on your practice.

After about 5 minutes of tensing, squeezing, shouting, and crying, I started to calm down and I felt very relieved and happy. The happiness lasted for the next 6 days.

The happiness was equal to a man finding a true love, some happy events, or having a big-time fortune. Or I should use the word "extreme joy". As in my case, happy with no reason, although currently I am facing many tough problems with life.

After these two weeks of happiness, I started to feel dizziness and heaviness. I did not have dizziness ever since I started Stance Training and Chi Kung in 2008. Since 2010 the advanced Chi Kung Course, I added Forceful Small Universe, I didn't experience any bad feeling too.

You were happy because you had cleared the blockage or part of it There was a good reason for your happiness, but you were unaware of it.

This actually applies to all people. Some people, for example, are afraid of height but they do not know why. A possible reason was that in one of their past lives, they fell from a great height and were seriously injured or killed.

You were entering another level of cleansing. That was why you felt dizzy. Cleansing is cyclic, not just linear. But only those who practice high-level chi kung have an opportunity to experience the cyclic effects of cleansing.

Karmic cleansing may take a long time. But you need not hurry. Take your time and enjoy your practice. Your problems is that the cleansing is too powerful for comfort. You can slow down your practice. 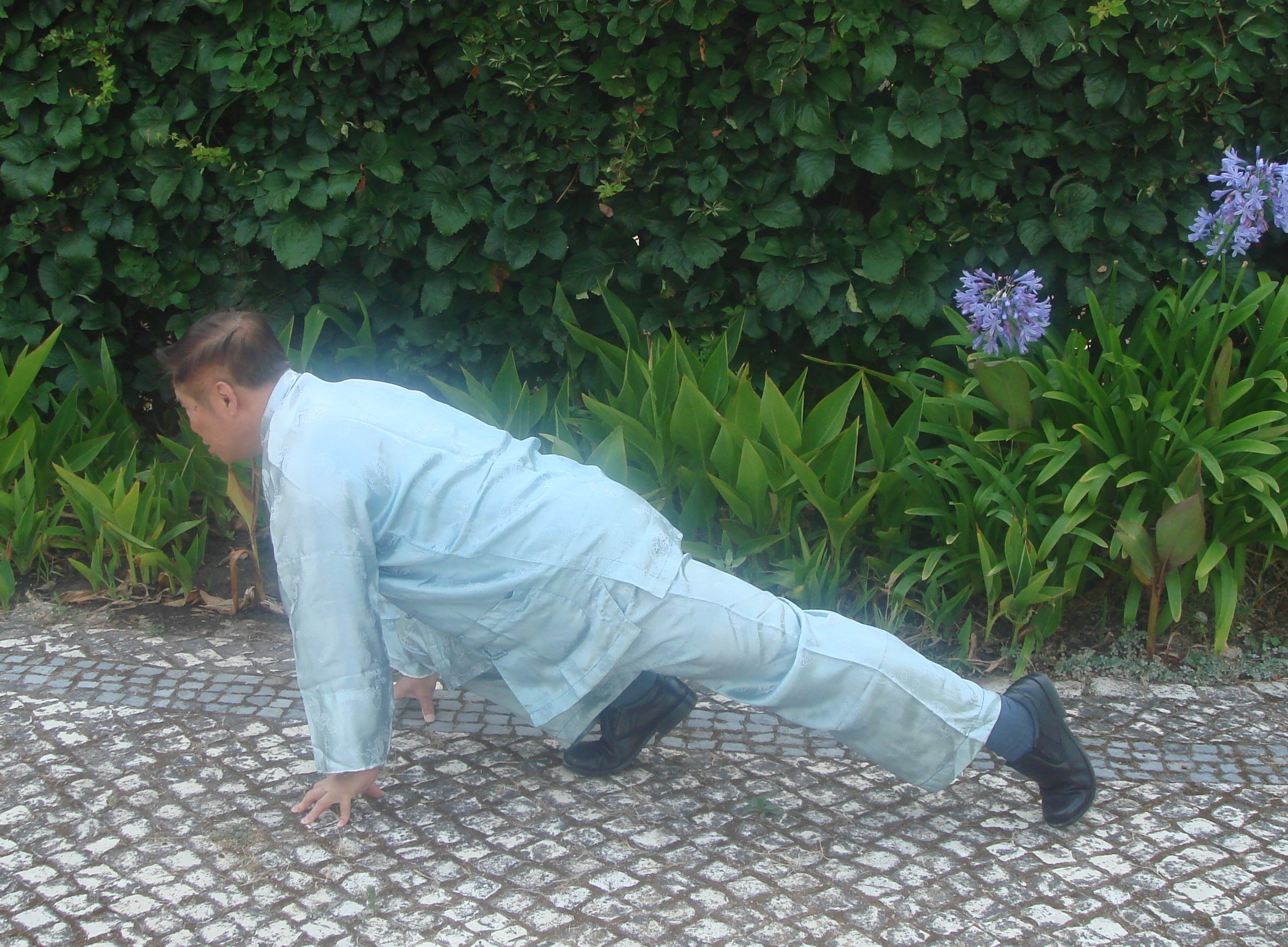 When I thought to call Sifu for advice, it crossed my mind that touching the tongue to the upper gum but a bit inner towards the throat could help. I was driving then. After 10 minutes or so, the dizziness or heaviness went away, and I felt relieved and also very happy, and arrived at my hometown safely and happily.

My usual practice for the past 2 years consist of 3-Lohan Hands, then 15 minutes of Stance Training which consists of 5 minutes of One-Finger Shooting Zen, 5 minutes of Horse Stance and 5 minutes of Golden Bridge or with arms stretched forward and palm facing down. Then, chi flow and standing meditation.

Lifting your tongue to touch your palate like what we do in the Small Universe may give you temporary relief.

You will still feel dizziness because your karmic blockage has to be cleared. Different people will have different symptoms due to their different past lives. In your case it is dizziness. In other people it may be something else.

We have improved our teaching methods and cost-efficiency unbelievably, especially for those who have attended the Small Universe course.

You can now practice less, yet get more results. This means you have more time to do whatever wholesome things you want.

Since 2010, during chi flow I have been performing tensing muscle and Yoga-like posture. The tensing of muscle is different from tensing them consciously, and it feels nice. Later I have found out that these posture are almost similar to several postures in Sinew Metamorphosis (Flicking Fingers, Grasping Fist, Lifting Body, lifting Sun and Moon), and several in 18-Lohan Art (Crouching Tiger, Praying to Buddha, Putting Knuckles Behind the Back), and in Iron Wire. I felt weird but I normally just enjoyed it.

In Horse Stance where arms stretch forward, it always comes to my mind that a cave with something flowing down the concave cave wall. During Three-Circle Stance for fun, I only "see" my ribs and nothing else. I feel very empty (sure I don't mean I see the void).

You are right, just enjoy those spontaneous exercises similar to Sinew Metamorphosis and Eighteen-Lohan Art, without worrying and without intellectualizing. A possible reason, which you need not worry about but mentioned here for intellectual curiosity, is that in one of your past lives you had practiced these arts. Another possible reason is that you have connected with Cosmic wisdom. Your experience is not uncommon with many of our senior students.

The interesting sensations you feel are signs that you are progressing. You need not intellectualize on their meanings, but just for fun, the piston-like white stuff could be energy breaking through your rush-meridian, i.e. the meridian from your hui-yin straight up to your bai-hui. In yoga literature, this is sometimes described as the awakening of kundalini. 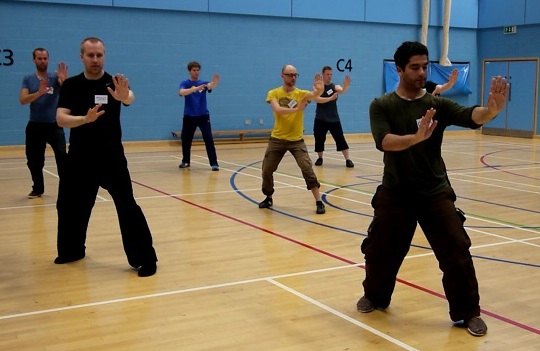 I felt weird but I get sick a few times this year, which frustrates me.

I had gout attack at the end of July which made me hardly move for about one week. In May I had half a month long of flu and coughing. Beginning 2013, my average practice is only 10 days (15 minutes per day) in one month, and with unhealthy diets (fast food, instant noodles, sweet cold drinks).

It was strange that you were sick a few times. You should not be sick at all, especially when you have attained a break-through of the Small Universe. One possible reason was that you have over-trained. Your sickness was due to your body telling you to slow down.

Another possible reason was that a lot of defilement from your previous lives was coming out, and in the process you might be sick.

Having gout attack was more strange. You didn't seem to enjoy the benefit of what past masters said, i.e. attaining the Small Universe hundreds of diseases would be cleared. Practice less, in time as well as intensity, and you will benefit more.

Just carry on your daily practice, but slow down remarkably. Use the extra time to find a lovely girlfriend.

My friend suggested I go for a qigong course with a certain organization. I feel ridiculous that I consider myself intermediate level in chi kung, and now I am suggested to take on a beginners' course of another school.

And the course claims the ability for clearing ren and du meridian within q short period of time.

You are right. It is ridiculous for someone having practiced high-level chi kung to take up a beginner's course of low-level chi kung.

But the experience is not without its benefit. You can test out what I have said in some of my courses, i.e. if you learn from a book or from another school you may find you attain higher level results than the instructors themselves.

Clearing the ren and duo meridians within a short period of time is high-level chi kung.

But some chi kung schools today, even when their students practice only gentle exercise, make this claim. Either they do not know what they are saying or they do not say what they mean.

Interestingly, many people also accuse us of similar claims, or worse they call us liars behind our back or under protection of anonymity. In our case we honestly say what we mean and clearly understand what we say. Others may not understand us or believe us. That, of course, is their business.

Editorial Note : Jsson's questions will be continued at October 2014 Part 2 issue of the Question-Answer Series. 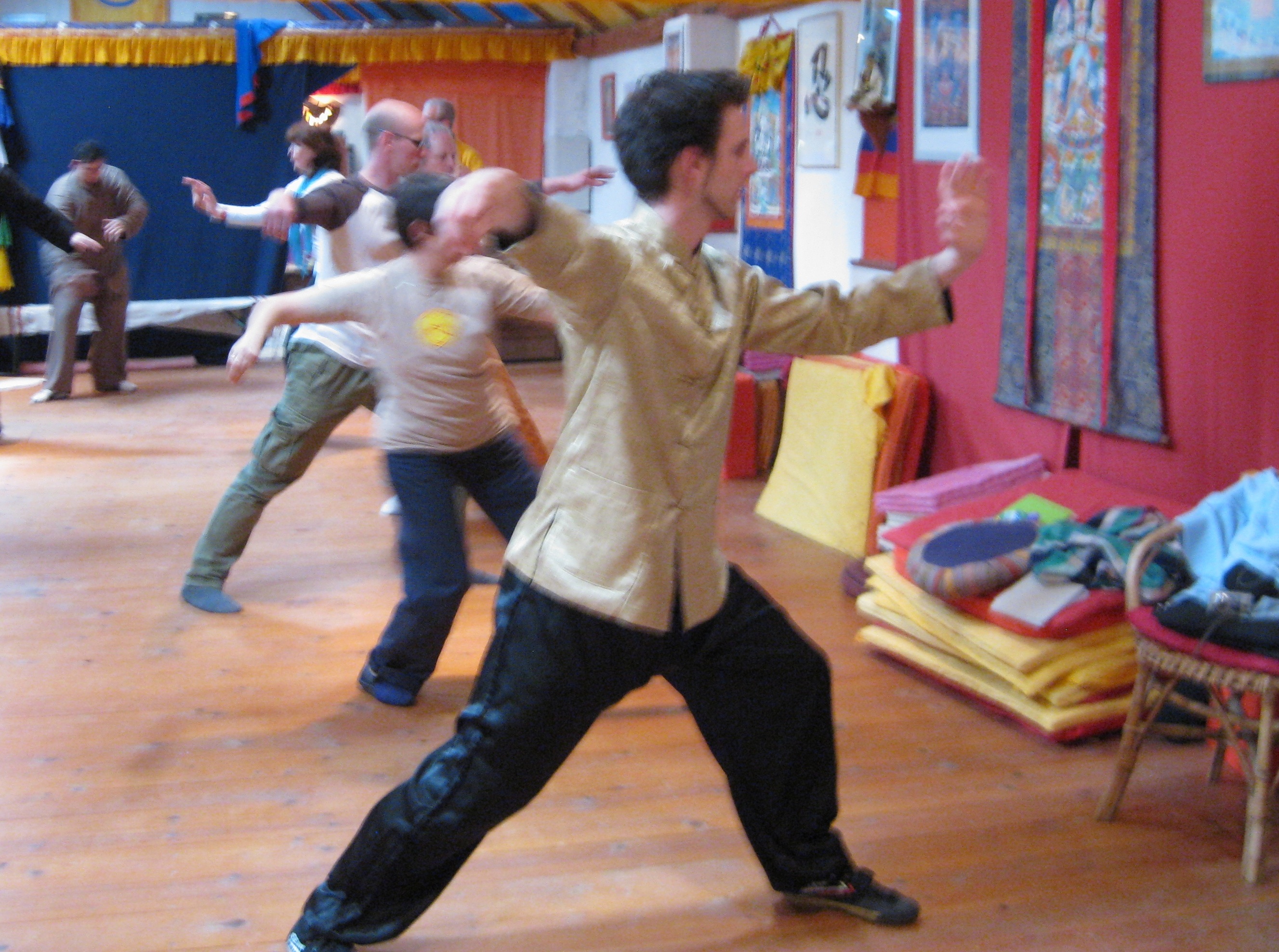 Single Whip is an excellent way to explode force in Taijiquan

What is the difference between the flow mode and the expansion mode in the practice of "Santi Shi" or "Three-Body Poise" in Xingyiquan training?

In the flow mode, a practitioner lets energy flow along his forward arm. In the expansion mode he lets energy expand from his dan tian outward to all parts of his body, and at an advanced level beyond his physical body.

As energy flows out of his arm in the flow mode, and radiates out of his body in the expansion mode, will the practitioner eventually be depleted of energy?

No, because energy from the Cosmos will flow in to replenish him. He will be stronger physically and spiritually after the training.

What is the difference in the explosion of force between Xingyiquan and Taijiquan?

When force is channeled out of the hand from the dan tian in Taijiquan, energy from the Cosmos flows into the dan tian to replenished the exploded force.