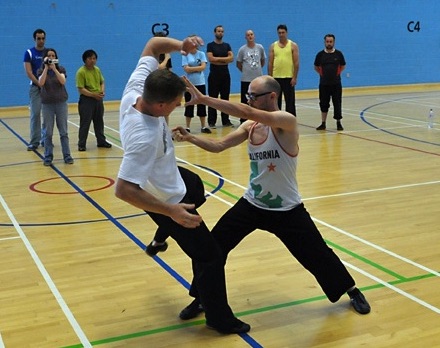 I hope you are well! I wish you and your family a very happy New Year.

Thanks for your kind wishes. We are all very well and enjoy every day of the year.

I had a very nice experience while I was teaching Kung Fu to my students. I had a guest who had asked to be allowed to attend a class. It turned out he was a Wuzuquan and Wing Chun instructor. He was very muscular and also very polite.

I instructed him not to use physical force when doing a technique and I showed him how to perform our techniques in a very relaxed way as he was using so much strength. He then said he missed the jing of my teaching, and he was curious to test my jing. I suggested three-star hitting and we did.

After some time he stopped and thanked me. I don't know if he was being polite by stopping first or if he could not comfortably go on anymore. I do know I could smile all the way through three-star hitting and could have gone on without any problems.

This is a great contrast to when I was training three-star hitting in another Kung Fu school, before I was accepted as a student by you. Then it was more or less a bout of whoever could stand the agony for the longest time. It was another moment to realise how much I owe you for sharing these Arts, as I am now stronger than when I was younger!

Your experience with the Wuzuquan and Wing Choon instructor was very illuminating.

Please note that I use the term "Wing Choon" instead of "Wing Chun" as used by most other people. The reason is that "Choon" is like the original sound spelt in English. "Chun" in English spelling may be mispronounced as "chan".

Three-star hitting is a common way to test force. I think he found you too forceful for him, despite the fact that he was muscular and you not so. He may also be polite.

A good way to find out was how you felt. If you found the three-star hitting effortless and his arms light, it was likely you were more forceful than him. As you could carry on and smlle all the way, this was probably the case. Now you are not only stronger than when you were younger, you are also healthier, happier and look younger. 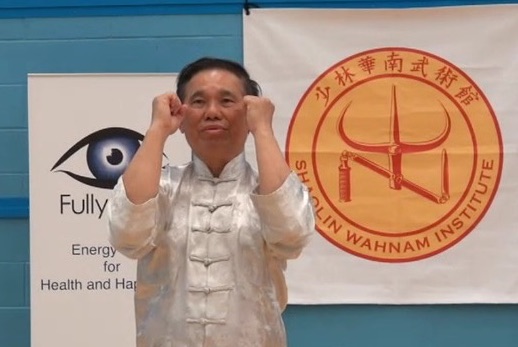 Pulling Up or Lohan Emerges from Water

Yes, if an instructor from another school makes a comment about combat efficiency, especially if the comment is derogatory, you or any of our instructor can, in fact should, propose a friendly sparring match. We walk our talk.

But be careful not to hurt the guest, or make him feel degraded. You can show him clearly that you could hit him but you didn't by moving your hands over his face. However, if he is a student, and not an instructor, you can ask him to spar with one of your students.

If another person, instructor or otherwise, slanders our school, we can choose to ignore it if the slandering is not serious, or to take up the challenge. If the slandering is intentional, and as part of our scholar-warrior training, we are sure to beat him, we can ask him if he would like a sparring match.

As you know well, a scholar-warrior does not fight to win; he is sure of winning before he fights. If you are not sure of beating him and he agrees to a sparring match, let me know and I shall arrange for some of our instructors to fight with him. We always walk our talk.

I am proud and happy to say that we accepted all challenges so far, after considering the combat efficiency of our opponents and of ourselves. I am indeed gladder that without an exception, all our challengers withdrew their challenges. No fighting is better than fighting, even when we win.

But we would have to kill him if he persisted on with the challenge. I knew it was a lose-lose situation, but we had no choice if forced into this situation.

That was why I specially asked our instructors who took the challenge not to hold back in the contest. Some of our instructors were too kind. They forgot that a life-death contest was a life-death contest. If they did not kill the challenger, the challenger would damage them seriously and mock us. To be compassionate is not just not killing when killing is absolutely necessary. It is not causing unnecessary suffering. If it is absolutely necessary to kill an opponent, we must not be afraid to do so. Very fortunately, in real life it is usually not necessary.

I love doing Reaching Up (Lohan Reaching for the Sky) and Pulling Body (Lohan Emerging from Water), as you taught at the Summer Camp. Will I obtain Thirteen Grand Guards automatically after training for some time, or do you need to do additional exercises (such as hitting yourself with a bag of beans and a bundle of canes)? Do you need to increase the number of repetitions gradually? Is there a big difference between Thirteen Grand Guards and Golden Bell?

The way we train our kungfu, all styles of our kungfu, leads to Golden Bell. "Lohan Reaching for the Sky" and "Lohan Emerging from Water" of Sinew Metamorphosis are particularly useful.

This actually helped me to answer a question puzzling me for some time in the past. From kungfu stories, Shaolin masters like Hoong Hei Koon and Lok Ah Cnoy could take punches and kicks from ordinary people without sustaining injury. This meant they had Golden Bell, but there was no mention that they trained Golden Bell. Later I realized that the way they trained their Shaolin arts, like we do, gave them Golden Bell.

You and many of our instructors have Golden Bell though you and they may nor realize it. Barry was a shining example. I noticed that Barry had good Golden Bell. So, one day, without prior warning, I asked Barry to stand in front of a class, and other people to punch him. At first they punched him gently. Later I asked them to punch Barry really hard. It was literally nothing to Barry.

As a side note, Barry did not formally train Shaolin Kungfu, for which Golden Bell is famous. He trained Taijiquan.

It is good for you to test your Golden Bell. Ask someone without internal force to punch and kick you, first gently, then gradually very hard. Try that with a few people.

You can perform additional exercises before the testing if you want to, which will increase the efficiency of Golden Bell as well as add to your confidence. It is helpful but not essential.

Before hitting yourself with bundles of cane, bean bags and pebble bags, you may, if you like, practice Golden Bridge for half an hour, or Lifting Water (stationary mode) for an hour. This will spread chi round your body to act as a buffer against punches and kicks. You should increase the time of training or number of repetitions of any relevant exercise as you progress.

Needless to say, these training methods are meant for you and those initiated. Those not initiated may hurt themselves even when they follow the instructions exactly. 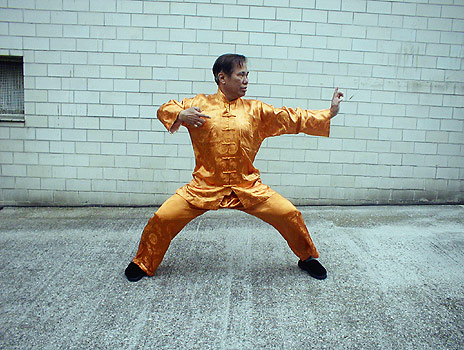 We do Ba Duan Jin every morning and then go into stance training. We have practiced daily for 1 year and have increased our time to 40 min in horse stance.

We then do some breathing exercises. We are aiming to progress daily and I am in constant search of masters' advice and direction, as we are not wise enough to be sure how to progress.

"Ba Duan Jin" or Eight Pieces of Brocade, constitutes the first 8 exercises of our Eighteen Lohan Hands. Ba Duan Jin is excellent chi kung, if it is practiced as chi kung, i.e. energy exercise. Like all other chi kung exercises, it is frequently practiced as gentle physical exercise, often without the practitioners realization. As an analogy, most Taijiquan practitioners do not practice their art as an internal martial art, but as external dance-like forms.

If you perform stance training for more than half an hour, it is likely you perform it as an endurance test, and not as internal force training.

Breathing exercise should be learnt from a competent teacher. If you attempt it on your own, you will get no result if you are lucky, or adverse effects which is likely.

Instead of following your schedule on your own, you will find it more cost-effective, in terms of both time and money spent, if you learn from a master.


Editorial Note: Ben's other questions can be found at Selection of Question and Answers February 2017 Part 1.

I trained in martial arts and practiced in Korea, before coming back to UK and then began a career in Boxing.

I took up yoga and qigong during my Boxing career and I really felt that this was the true meaning behind any training or martial art, to master the internal energy. It led me to many practices and exploration.

Because most people are not trained in real fighting, you can easily beat them with Taekwondo or Boxing or any other martial sports like Muay Thai, Wresting and Cage Fighting. Most people, for example, are not trained to hit your groin when you kick high, or strike below your belt when you box them. 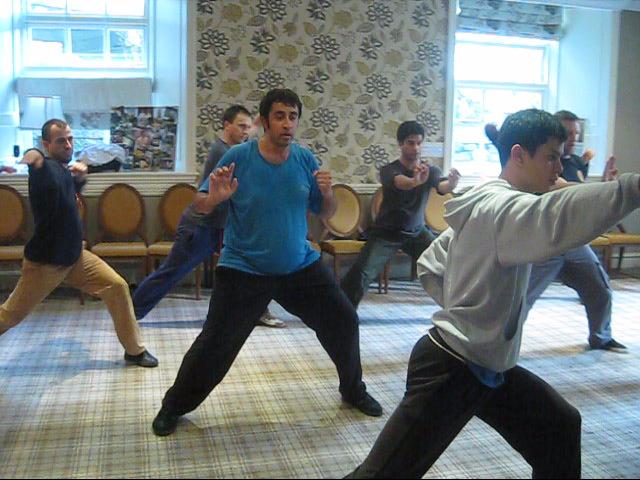 The kungfu we practice is not our invention, but a legacy passed down by generations of masters

But as you say, it seems people don't aim so high these days, and I was left with a feeling that the only way to go deep enough was to practice myself. I've found some like-minded people and we all add to each others' energy and strength for the journey.

Practicing yourself is a bad way. You don't benefit from the legacy handed down by generations of masters. It is like reinventing the wheel.

Let us take an analogy. If you want to have the benefit of a car, you don't reinvent the wheels, and the whole long processes over many centuries that eventually lead to the present car. You go to a shop and buy one.

Practicing with like-minded people may add to your and their fun, but may not add to your progress.

Please could you guide us some more? We will be ready to add whatever you say to our 5 am practice.

Honestly, you will get the best benefits, as well as incur the lease cost compared to the benefits you get, by attending my Intensive Chi Kung Course or Intensive Shaolin Kungfu Course.

Alternatively you can attend my regional courses, or you can learn from our certified instructors. Please see my website for details.