SELECTION OF QUESTIONS AND ANSWERS
MAY 2018 PART 1 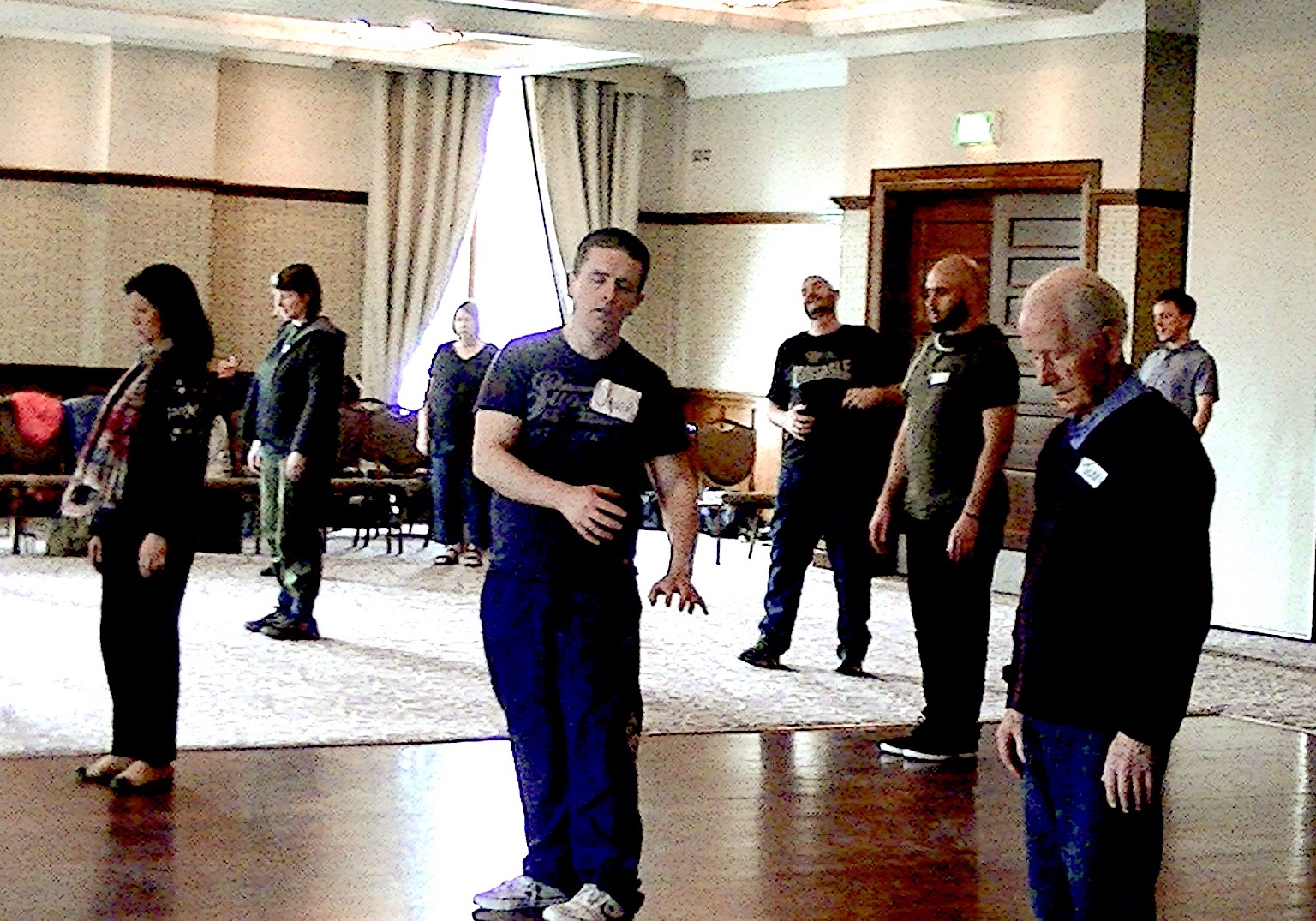 Students in this class in Ireland practiced chi kung, but more than 80% of practitioners practice gentle physical exercise although they use chi kung techniques

This is a very important topic. More than 80% of people who say that they practice chi kung, actually practice gentle physical exercise, and not chi kung.

Hence, they do not have the benefits of chi kung, like good health, vitality and longevity. If they have these benefits, and we sincerely wish that they have, it is because of other reasons, and not because of their practice. Those who practice chi kung, which is actually rare nowadays, will have the benefits of good health, vitality and longevity from their practice.

You also have mentioned that there are three dimensions in chi kung training, which are form, energy and mind. Can you please tell us more about that?

Having differentiated between gentle physical exercise and chi kung, it is helpful to know that chi kung may be divided into three components, which are form, energy and mind, or "jin", "qi" and "shen" in Chinese. Any chi kung technique has these three components; the division here is for our convenience.

Amongst the three components of chi kung, form is the least powerful, energy is more powerful, and mind the most powerful. As a rough estimate, form constitutes about 10% of the potential of the chi kung exercise, energy constitutes 30% and mind 60%. A person who performs gentle physical exercise does not have any chi kung benefits from the exercise. Thus, many such practitioners, who say they practice chi kung but actually they do not, are still weak and sickly despite having practiced their art for years. 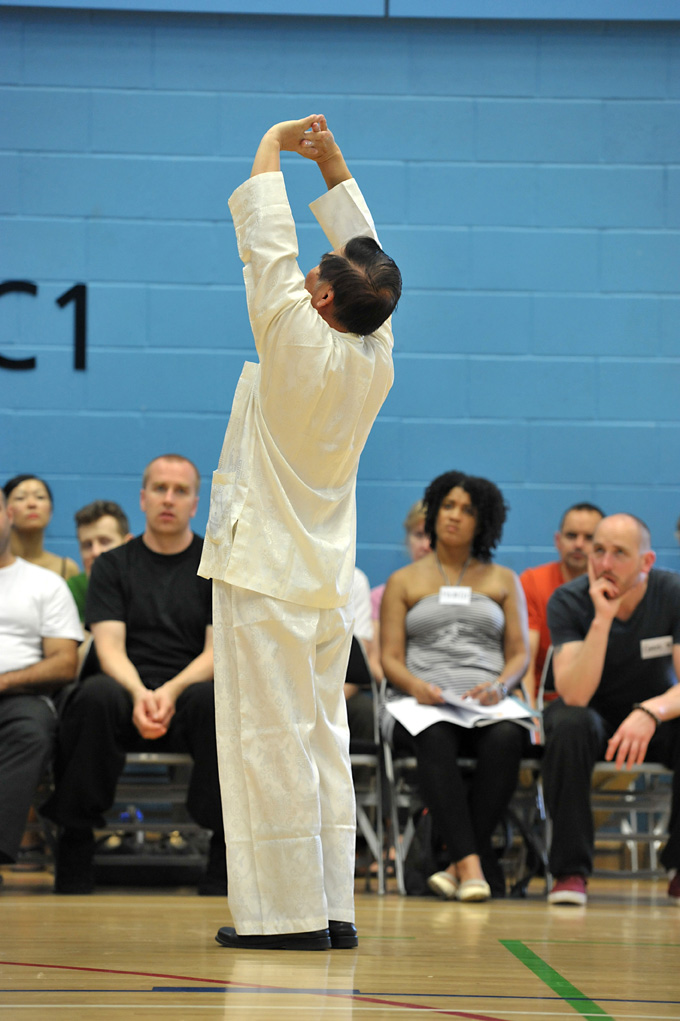 What are the functions or purposes of form, energy and mind?

Form, or "jin", is the visible aspect. It establishes the technique. Standing upright, rising and lowering of the hands, as well as looking up and looking forward of the head, constitute the form.

Just performing the form alone is not doing chi kung. This is what more than 80% of practitioners who say they practice chi kung do. They only perform the form, but lack the skills for energy and mind.

It is an exchange of energy, not just breathing of air. There are many types of chi kung where regulating the breath is not performed.

In chi kung, not only there is an exchange of energy, the energy also improves in quality and quantity. Hence, a chi kung practitioner has more energy after his chi kung training than before. This is not so in gentle physical exercise. A practitioner of gentle physical exercise has less energy after his training than before because he spends his energy during his training.

Mind, or "shen", is the most important component in chi kung. If a practitioner is not in a chi kung state of mind, he won't be practicing chi kung; he merely practices gentle physical exercise although he may employ chi kung techniques.

How does lowering ones potential when he has over-trained involves form, energy and mind?

This is a very important question for those who have over-trained in our school, although other people outside our school may not understand my explanation even when they know all the words used.

Over-training refers to correct training but the benefit is too much for the physical body to bear. So we have to guard against over-training, or to remedy over-training if it has occurred. We purposely perform below our potential, like at 30%. If we find performing at 30% still leads to over-training, we further perform lower than 30%.

To quantify the three components of chi kung, we each list form, energy and mind from 1 to 10, 1 being the lowest and 10 the highest. A participant, for example, practices at his potential, and he finds himself at level 8 of form, level 8 of energy and level 8 of mind, but he finds he has over-trained.

So he decides to practice at 50% of his mind level by going half his potential into his chi kung state of mind, which is at level 4 of mind, and he continues to practice his form and energy at their potential, which is at level 8 for both form and energy. This was what I stated earlier by not going too deeply in a chi kung state of mind. This is a good approach.

We cannot leave out mind and form. If we leave out mind completely, we shall not be practicing chi kung. It becomes gentle physical exercise. At the least we must be at level 1 of mind. 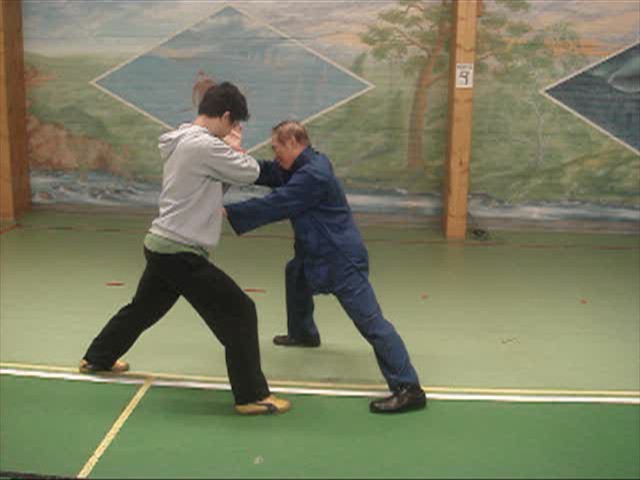 Dim mark techniques are hidden in the Flower Set

Dim mark is called the touch of death, but you call it a compassionate art. Can you please tell us the difference?

"Dim mark", or dotting an energy point on an opponent so that he cannot fight further, is called the touch of death because a seemingly gentle touch by a dim mark master on an opponent can lead to death if the opponent does not heal the dim mark injury.

To stop an opponent from further fighting, especially in a life-death combat, an exponent has to inflict serious injury on an opponent, like breaking his bones or causing damage on his internal organs. If the injury is slight, the opponent can continue fighting.

In the past all people, including those who did not practice kungfu, knew that if a dim mark attack was not treated, it would lead to serious or fatal injury. So every victim of dim mark would seek treatment from the same master, another master or a good physician.

The dim mark injury was reversible. Once the energy blockage caused by dim mark was released, like by unblocking the injury or taking herbal concoctions, the victim could regain complete normalcy. Hence, it was, and is, actually a compassionate way of fighting.

My son has certain tics (involuntary movements, sometimes many times a day, sometimes only a few). You recommended either stroking him or even better teaching him Lifting the Sky. It went really well for some time but now I have noticed that his tics have increased again since going to a new class. He also has less patience for doing Lifting the Sky, which is why I have gone back to stroking him as you taught at the Healing Course. Is this all right?

His new class may be connected with his tics. It can be an emotional problem causing the tics to recur. Find out whether it is anxiety, his teachers or his friends that cause the problem.

It is alright to continue stroking him. But it will be better if you can teach your son some simple kungfu. Make it fun. He will find it interesting to practice kungfu. Let him have a chi flow after the kungfu. The chi flow will overcome the problem of his tics, often irrespective of what the problem is. This is the magic of chi flow. 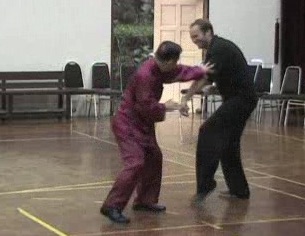 I also have a question about Kung Fu. Some time ago I did a lot of sparring and got to opponent number 16. I wish to finish and spar with the remaining 14. One reason why I didn't carry on was because I first wanted to be better at executing sequences -- defending and using openings left by the opponents was usually how I won.

You should continue with the remaining 14 opponents, irrespective of how well you use your sequences. The onus of the 30-opponent programme is improving your sparring skills, irrespective of the level of skills you started with.

You will be quite formidable by the time you have completed the 30-opponent programme. You will be able to handle masters and professional fighters quite easily.

I will now carry on with 2 sequences: Lohan Carrying Moon in Bosom and Swimming Dragon from the Flower Set, my favorite sequence.

I would like to ask for advice about the first part of the Swimming Dragon sequence. I have found that some opponents only respond to a firm strike and ignore me touching their head.

If I wear gloves, what would be the best way to replace the dragon hand which bridges the opponents punch? A leopard strike?

Would you still use a leopard to bridge along the opponents arm or would it be better to strike at the ribs below? Or would you recommend using the dragon hand with gloves on and just gently tapping the opponent?

Carry on sparring with your opponents irrespective of what sequences you use, but ensure that the sequences you have chosen are effective.

Your sigung, Uncle Righteousness, used a simple sequence of Black Tiger and Fierce Tiger from the Triple Stretch Set, and won the enviable nickname of "Old Righteousness", and later "Uncle Righteousness" when he was more elderly. It is skills, not techniques, that are improved in the 30-opponent programme.

Both the Lohan Carries Moon sequence and the Swimming Dragon sequence are advanced. Not many opponents can defend against them.

Strike the opponent, which may be an ad-hoc pattern from the sequence, whenever suitable with whatever hand-form that is suitable, including the leopard fist at his ribs.