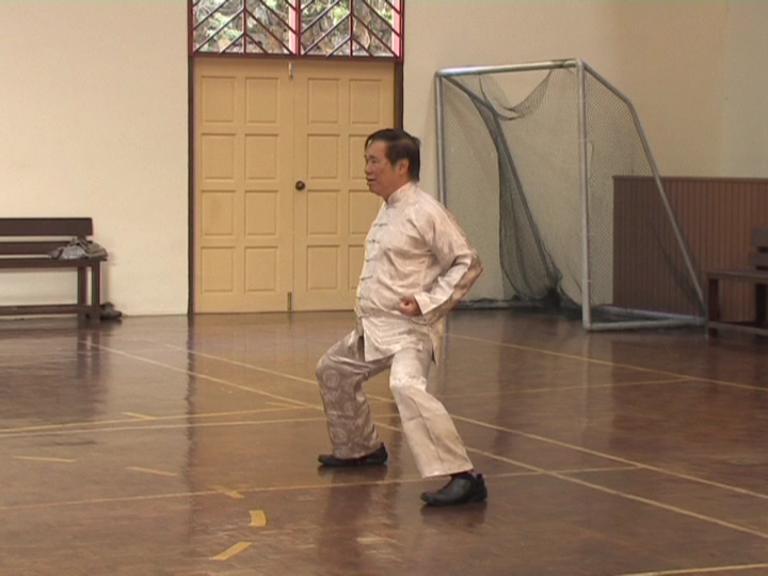 I heard some elderly people say that in China in the past people who trained kungfu spent many months just practicing the horse stance.

That was true. I remember my father telling me when I first practiced kungfu from Uncle Righteousness more than 60 years ago, that people in China spent a long time, sometimes 2 years, just practicing the Horse-Riding Stance.

For example, Hoong Hei Koon, who was a famous Southern Shaolin master, practiced the Horse-Riding Stance every day for 2 or more hours. He had a lot of internal force. He could kill an opponent with just one punch.

When I first learned the stances, I just followed my seniors' advice. My senior classmates, Chiew Shi Khern and Wong Choy Wah, taught me the stances on behalf of my master.

Wong Choy Wah, who later became the Grandmaster of Chin Wah Kungfu Gymnasium, named after my master, Uncle Righteousness, whose real name was Lai Chin Wah, was famous for his internal force. Chiew Shi Khern was famous for his iron arm. Stance training must have contributed much to their achievement.

Some people I know spend some months practicing the stance, but they do not get any benefit. For example, they do not develop internal force.

When I first learned stance training from Uncle Righteousness, I only knew that stances formed the foundation of kungfu. If a kungfu practitioner wanted his kungfu to be good, he must spend some time on stance training. All kungfu movements were performed on stances. Later I learned that stance training provided a lot of internal force and mental clarity.

To develop internal force, one must be relaxed. The more a person relaxes, the more internal force he can develop. This is a fact that many people find hard to comprehend.

To develop mental clarity, one's mind must be clear. In other words, he must be free of thoughts. The clearer his mind is, the more mental clarity he can develop.

When they tense their muscles, they also tense their mind. They become stressful. Hence they do not develop mental clarity.

Tensing their muscles and being stressful are the two most common mistakes most people commit when practicing stance training. Hence they do not benefit from their training. 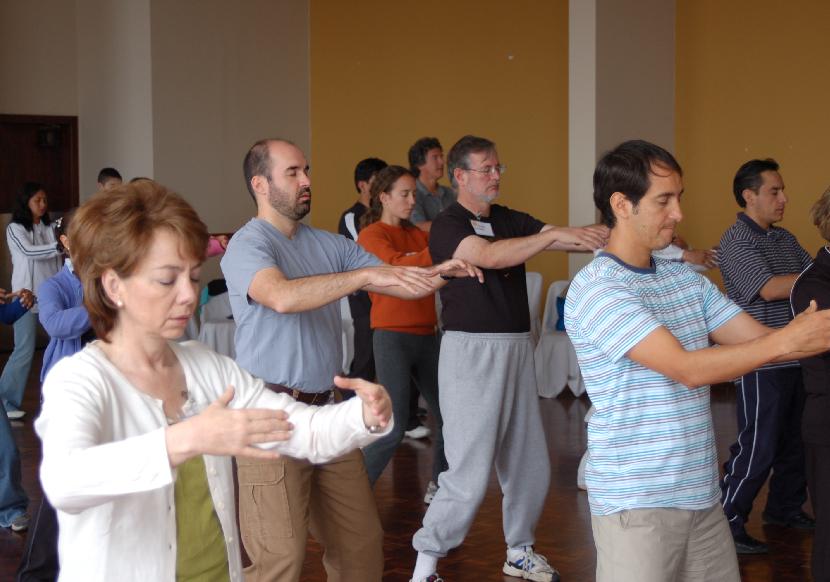 Why many martial artists today start their martial arts without practicing any stance?

There are three important reasons why many martial artists today, including many who practice kungfu, inclusive of those who practice Taijiquan as Taijiquan is kungfu, do not spend time on stance training:

The word "phenomenal" comes from the Greek word meaning "of appearance". The phenomenal things we see, like tables and chairs, people and trees, are phenomenal, which means they are only appearances. They appear to us as tables and chairs, people and mountains, because of our sets of conditions, like how our eyes see energy, how we feel energy, and how our mind interprets energy. Actually they are just energy, or "nothingness", but we see them as different entities, each different from another.

Different beings, like a butterfly or a bacterium, will see the same energy differently because they have different sets of conditions. A ghost, which is a being, may not see things that we see.

Interestingly, there is also the age of enlightenment, which I use the small letter "e" unless it starts a sentence. Here, enlightenment means we know the underlying philosophy. It often includes thinking, or reasoning. 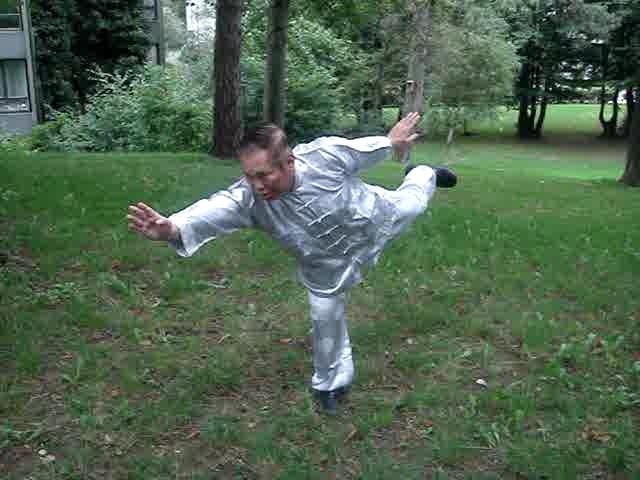 "Swallow Flying through Clouds", one of countless forms in chi kung

I didn't go to a doctor or made any test. I felt the tumor with my hands. Even if I still worry a bit because I have pain here and there, is it ok? I really enjoy my chi kung practice though without worrying or intellectualizing, will I recover with time?

If you worry a bit, it is still worrying.

The tumour, if any, can be benign, not cancerous. It may not be a tumour, but just a piece of muscles. You are worrying unnecessarily.

I think the pain you feel originated mentally, though it may be real now. In other words, at first you thought you felt some pain, although there really wasn't any pain, because you have a mind-set of feeling pain. Eventually the pain becomes real.

This may sound strange, but it is true. It has been confirmed by many years of experience. Actually I learn this fact from experience. Some people felt sick, although they were really not sick. But eventually they became sick physically. Thoughts create substance. This is a fact I have learned from many years of chi kung practice and healing.

The very first thing I help so-called incurable patients, like cancer patients, is to make them want to live. The second thing is to make them know that our chi kung can make them live healthily and happily. The chi kung treatment is only the third thing. This has proven to be very successful. One of the main reasons I was awarded Qigong Master of the Year, 20 years ago, was my success in helping cancer patients recover.

Maybe I should have stayed under sifu's supervision until I've completely recovered. Please guide me how to continue my chi kung practice and my life in general so that I could be healthy physically and mentally and live peacefully and happily.

I have given you the same advice many times.

Just practice what you have learned from your sifu for about 10 minutes a session, twice a day, without worrying, without intellectualizing and enjoying your practice.

Even if you stay with your sifu for 10 years, if you worry and intellectualize, you will not be healthy and happy. 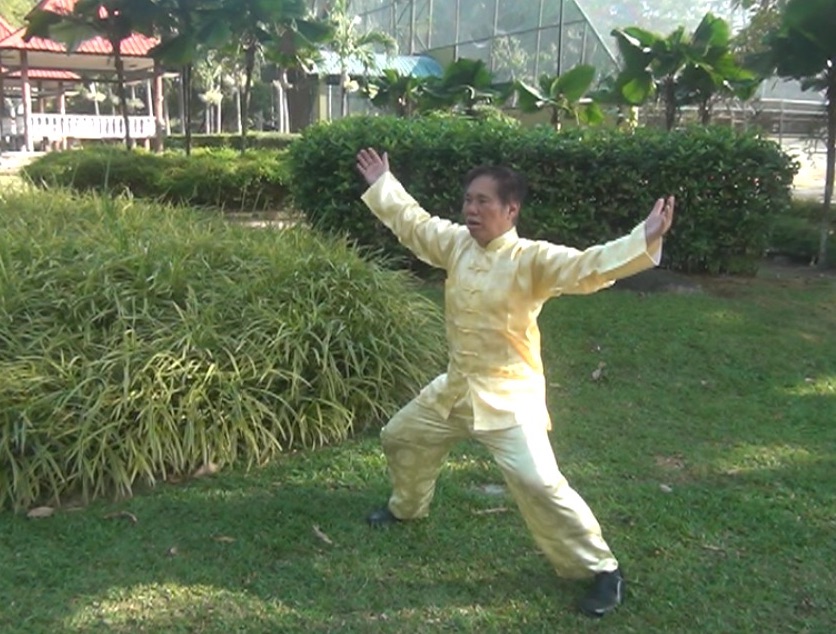 A pattern for internal force training in the Dragon Strength set

Why are there so many forms in chi kung?

These forms, which later developed into chi kung techniques, evolved over a long time. Chi kung has a very long history developed by a lot of people. It has a history of many thousand years developed by the Chinese, the biggest population of the world.

At first, the various forms were individual, not stylized into a system. Early people, for example, discovered that if they made a sound, they would carry heavy objects better, and if their breathing was regular, they would be more effective at their work. Initially these different forms were used for expedient means.

Hence, many techniques developed over time and space, resulting in many different chi kung forms. People living at a particular time and space were limited to the forms available, though some of them might know of other chi kung forms that were more effective. For example, some might know that Five-Animal Play was excellent to overcome illness, but if Five-Animal Play was not available, but other styles of chi kung were, these people would have to be contented with these other styles of chi kung. This difference of history and geography also helped in the growth of many chi kung forms.

Sitaigung, you have said that the Wudang Taijiquan is the climax of Shaolin kungfu development, Essence of Shaolin is the essence of Shaolin Kungfu and by extension all martial arts, and Dragon Strength is your favorite set.

What are your comments on the three legendary sets -- Wudang Taijiquan, Eessence of Shaolin, Dragon Strength?

All these three sets -- Wudang Taijiquan, Essence of Shaolin and Dragon Strength -- are great sets. To me they are the greatest of all martial art sets.

Wudang Taijiquan is the oldest of the three sets, probably practiced by Zhang San Feng in the Song Dynasty. Dragon Strength is the next, in the Ming Dynasty, and Essence of Shaolin is the latest, in the Qing Dynasty.

It is interesting to note that the word "Taijiquan" was a later invention in the Qing Dynasty. At the time of Zhang San Feng in the Song Dynasty, Wudang Taijiquan was called Wudang Shaolin Kungfu, to differentiate from the Henan Shaolin Kungfu at the Shaolin Monastery.

Zhang San Feng was a genius. He incorporated kungfu, chi kung (or neigong) and meditation into one unity. Wudang Taijiquan, or Wudang Shaolin Kungfu as it was known at that time, was the climax of Shaolin kungfu development.

The combat application of Essence of Shaolin is also sophisticated, but many patterns are simple looking but used in a marvelous way. That is the reason why the patterns are selected for the set, i.e. their marvelous application.

The full name of the Dragon Strength set is Dragon Strength Chi Circulation Set. There are two main skills in this set -- dragon strength or dragon force, and circulation of chi or energy. Chi is circulated in such a way that dragon force is produced, and can be manifested very fast at any part of the body.

Because we in Shaolin Wahnam have trained different types of internal force, and also because of the way the patterns of the set are arranged to circulate chi, those who attended my Special Dragon Strength Course in December 2014 could use the set to generate a variety of internal force, like Triple Stretch force, Flower Set force, Iron Wire force, Siu Lin Tou force and Taijiquan force.

It is indeed ridiculous that all these three sets, and all the ultimate arts are found in our school. Other people may be angry at this statement or call us liars, probably behind our back. It is great that we have video recording to justify our claim.