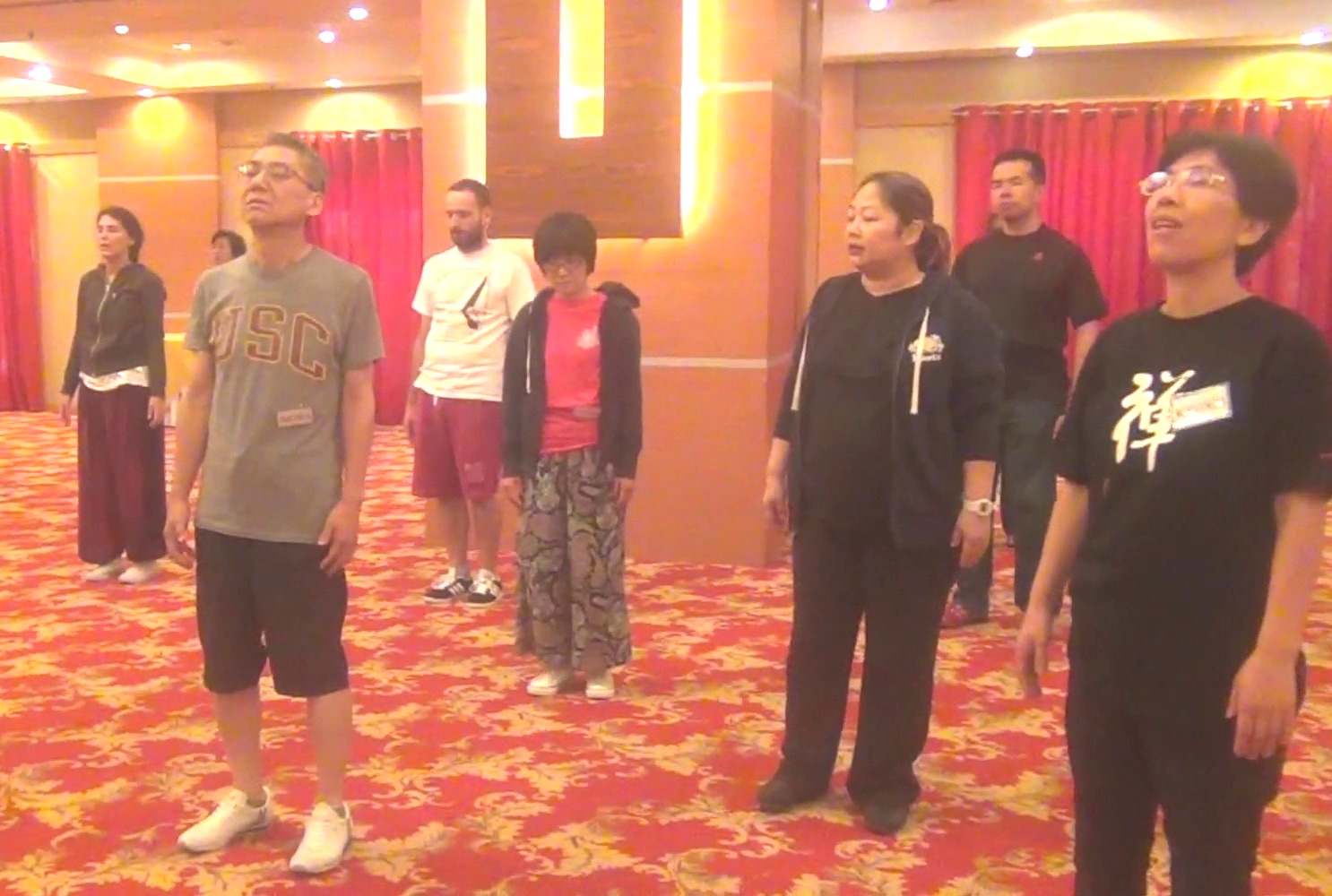 If a practitioner does not know what working on energy is, it can be suspect whether what he practices is chi kung

Most people who say they practice qigong, actually practice gentle physical exercise. Usually they are unaware of it. This is because they use qigong forms, or qigong techniques. In other words, they use chi kung forms to practice their exercise at a physical level.

In qigong or energy exercise, a practitioner must involve his qi or energy. It is not the forms but the skills that are important. In other words, one may use the same forms, but he can practice the same forms as gentle physical exercise or as qigong.

A good analogy is Taijiquan, often written as Tai Chi Chuan in English. Most people use Taiji forms to practice as gentle physical exercise. They cannot defend themselves with the Taiji forms, and they have no internal force.

“Qigong” is in Romanized Chinese, and is pronounced as /ch’i kung/. Hence the English word “chi kung” is popularly used.

There are many reasons why qigong has become gentle physical exercise. It is also useful to know that there are many types of qigong with different levels of attainment.

In the past qigong was rare, but the Chinese government wanted to popularize qigong. Hence, the government trained many qigong instructors in a short time to teach the public.

The type of qigong chosen was at a low level. Students repeated qigong forms many times to generate an energy flow. Usually the energy flow was not manifested outwardly; it flowed inside the students’ bodies.

Over time, the students lost the skills of generating an energy flow. They only performed the outward forms of the exercise. As more instructors were created, they also lost the skills, and hence what was originally qigong became gentle, physical exercise.

This loss of skills was not noticeable because most people did not differentiate between techniques and skills. They believe, which is wrong, that if they had the techniques and they practiced the techniques for some time they would have the results that practicing the art would give.

This is not so as evident in the fact that many people who practice qigong forms, but without the skills to generate energy flow, are still sickly and weak. Qigong, with the proper skills, would give practitioners good health, vitality and longevity. 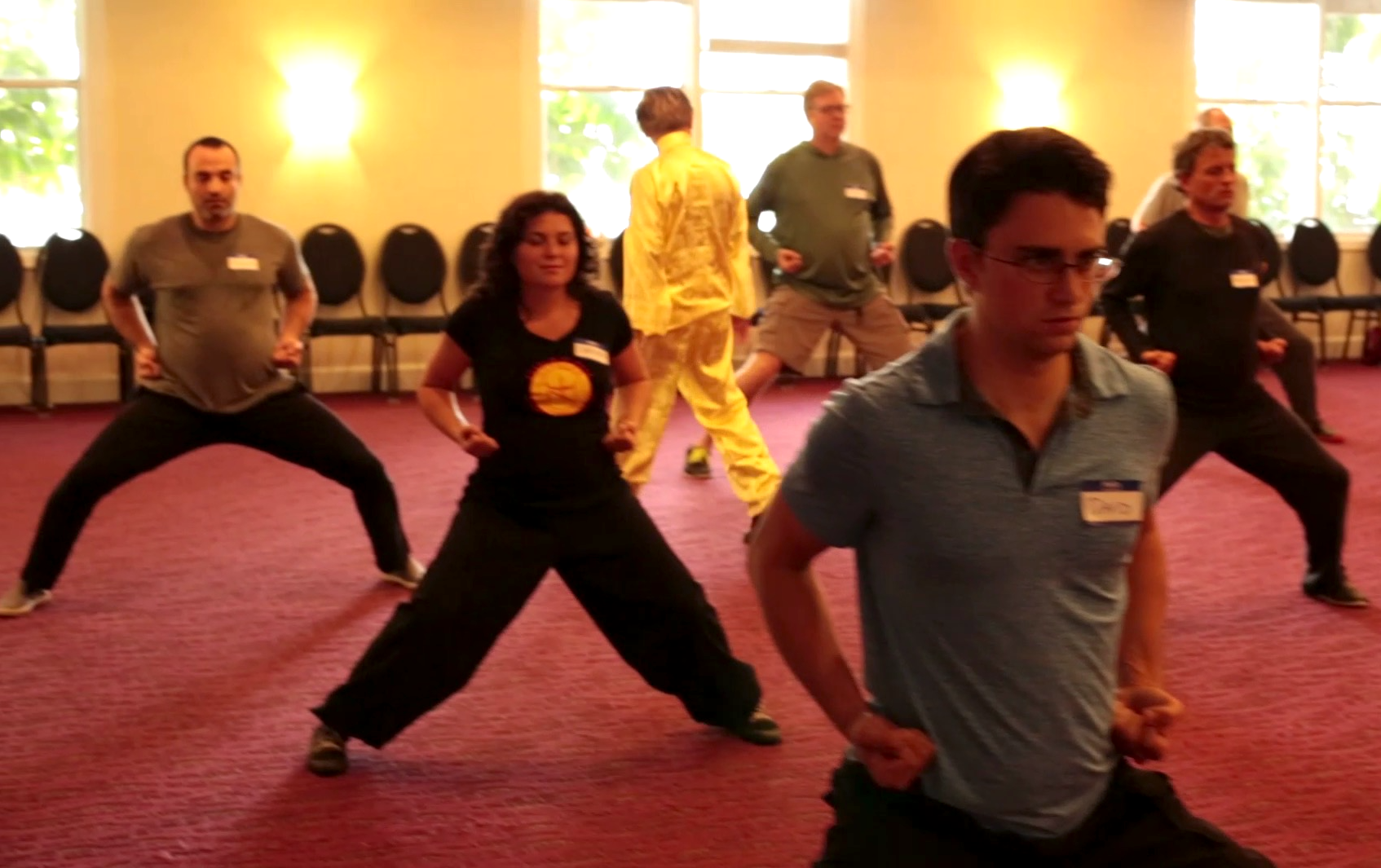 Many people may find it hard to believe, but a typical Shaolin Wahnam student benefits in one month what Grandmaster Wong would need one year when he was a student

You also have said that your students in Shaolin Wahnam get benefits in one month what you needed one year. Why is that so?

It is true that typical students in Shaolin Wahnam would get benefits in one month what I would need a year when I was a student. Hence, it is very important that Shaolin Wahnam students must not over-train. Over-training is practicing the art correctly, but the benefits are more than what their physical bodies can bear, and so the benefits become harmful.

The main reason why typical Shaolin Wahnam students can get so many benefits in a short time is closely related to the philosophy of setting up Shaolin Wahnam. A principal reason for setting up my school, Shaolin Wahnam, was that I was concerned the wonderful benefits of qigong and kungfu would be lost if nothing was done about it. So the teachers in Shaolin Wahnam were very generous in sharing secrets.

Over the years I also have become more effective in my teaching, like differentiating between skills and techniques, multiple-level teaching, and personal transmission. In my intensive courses, typical students can get benefits in one month what I would need a year. Hence, it is very important that our students must guard against over-training.

Talking about chi kung, you have repeatedly said that I have master-level chi kung skills, but would it be appropriate to refer to myself as a chi kung master? Or is it just something to leave to other people to start doing?

I'm sure that you know I am the last person to claim mastery of anything. This question came from reflecting on repeated conversations with Ada where she tries to convince me to think better of myself, which is very much in line with your own efforts.

A master is one who has mastered something.

I remember a story someone told me many years ago. A general shot three arrows at a target, and every one of the arrows hit the target. Everyone applauded except one person who was an oil seller. The general approached the oil seller and asked if his shooting was flawed.

The oil seller asked the general a question.

“Can you pour oil into a narrow container without spilling any?”

The oil seller took a container with a very narrow opening and poured oil into it, without spilling any.

The oil seller said, “You are a master of shooting arrows. I am a master of filling oil into a narrow container.”

Regarding chi kung, one who has performed chi kung forms for years, is a master of chi kung forms, though, as we know very well, he may not have practiced chi kung at all. Today there are many masters of Taijiquan external forms, but they have not practiced any Taijiquan, which is a wonderful internal martial art.

Chi kung has degraded beyond recognition. Most people perform external chi kung forms, without actually performing chi kung, which is energy exercise, and they may not realize it. You can perform chi kung -- not just its external forms -- very well. You are certainly a master of chi kung.

Calling yourself a master, which is actually a fact, would make many people angry. It is better to let other people refer to you as a chi kung master. But they may not do so because most people are ignorant of chi kung. They may call an elderly Chinese man who has taught external chi kung forms a master, though he may be sickly and weak.

Ada has a good philosophy of life. We must always think better of ourselves, though we do not boast about it. Thoughts create events. 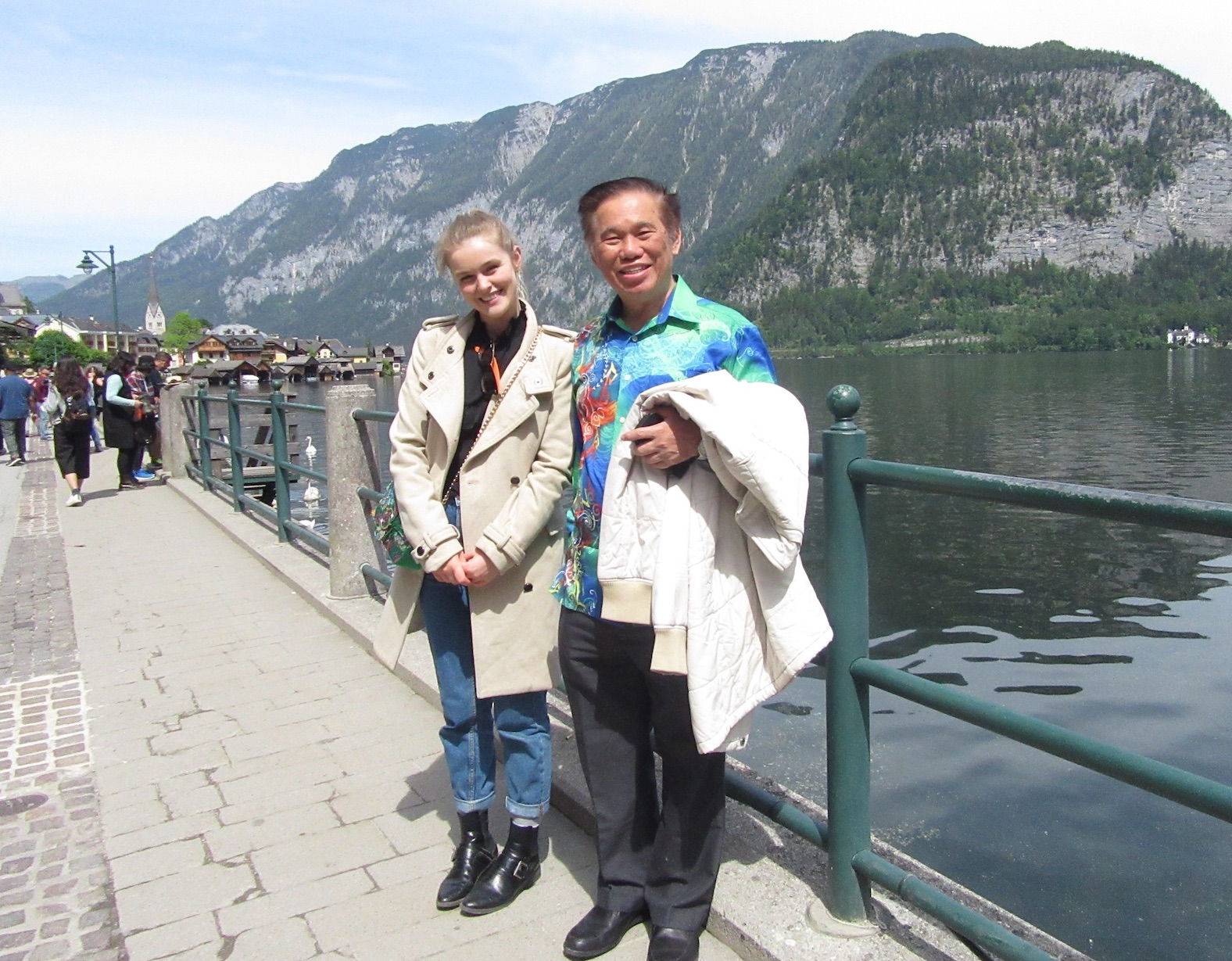 It is wonderful to be happy all the time

I am writing to seek your advice and help. Things have not been well for me. I have not been or felt myself. My wife and closest friends have noticed a change in me. One of my friends could see a change in my right eye, something that was not me. I have had feelings and displays of aggression, that are not me. My heart and spirit have been disturbed, like the joy is being sucked out of me.

It is likely that you have been attacked by a monster, which is far advanced than a ghost or a nature spirit.

Get a basin of clean water, and chant "Namo Guan Shi Yin Bohd Satt", or any appropriate scripture, about 20 to 30 times. Get a branch of clean twigs and leaves, and sprinkle your house with the sanctified water once in the morning, once in the evening and once at night. Do this every day for a week.

Early in the morning and at night before going to bed, ask Guan Yin Bodh Satt or any devine being you whorship to protect you, your family members and your house.

Recently, I watched a video about a Taoist master. He commented about yin yang balance in life, saying it was OK to be angry, upset, sad, or furious as long as it was moderate. Similarly we should not be too happy to the extreme, because we needed to find the balance of yin yang.

Sifu, I thought we should be happy all the time and avoid negative thoughts like being sad or worried. In my many years practicing and learning chi kung from Sifu, I have discovered that our mind is extremely powerful and we must avoid negative thoughts because they could bring harm to ourselves. I conclude that may be this master’s comment is only applicable to ordinary people that never learn high level chi kung.

He is a well known chi kung master. But his views of chi kung and mine are quite different. In my opinion, it is normally not good to be angry, upset, sad, or furious. His concept of yin-yang harmony is flawed. He thinks, which is wrong to me, that it is alright to be angry, upset, sad and furious so long as the negative emotion is moderate. My view is that it is not alright to have negative emotions, i.e. emotions that are harmful.

In this context, yin does not refer to a moderate negative emotion. It refers to an emotion that is harmful. In other words, if a person is angry, upset, sad or furious, and if that emotion is harmful, it is represented by yin. He can overcome the negative emotion, thus attaining yin-yang harmony, by eliminating it, or by having the corresponding positive emotion, which is being peaceful, satisfied, happy or composed.

It is the same as over-training. When a person over-trains, i.e. his benefits are too many or too much for his physical body to bear, he should reduce the benefits.

In my opinion, this master’s comment is applicable not just to ordinary people who never learn high level chi kung. His comment applies to all people irrespective of whether they learn any chi kung. 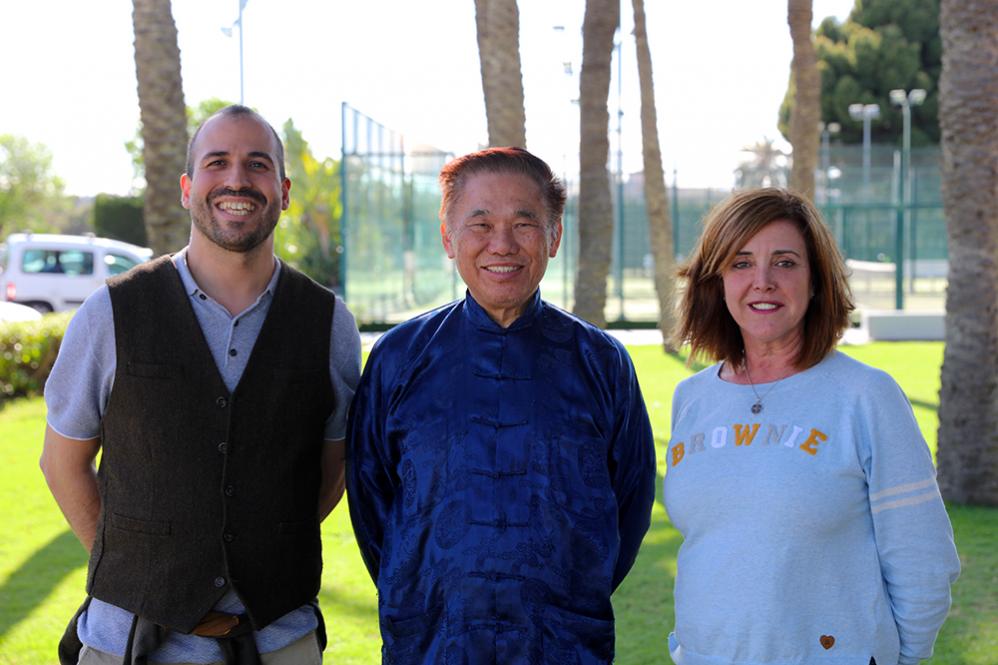 You said that chi kung did not help practitioners to find truth or falseness. I have two questions about this.

A chi kung practitioner, despite having practiced chi kung, may not know that what he says or believes is not true. For example, many chi kung practitioners despite having practiced their art for years honestly believe that what they practice is chi kung, and not gentle physical exercise, and they are still weak and sickly, though chi kung is meant to give them strength and good health.

Worse, chi kung practitioners who know that what they say is false, still say it as if it were true. They know, for example, that a certain master is not in their lineage, but they insist as if he were.

I have found from personal experience that my daily chi kung practice has helped me to better understand myself, others and situations. My point of view is always more positive, and although I might be wrong about certain things, I am more confident in what I say and think. Being able to have a positive view of things makes me feel like I am doing things right.

Of course, it is not about being right or wrong, but my question is: “Doesn't our chi kung contribute to seeing the truth on some level?”

A person who can see things clearly may sometimes tell untruths unwittingly. He may, for example, say that a certain disease is incurable when some patients, without his knowing, overcame that particular disease. Worse, he tells untruth wittingly.