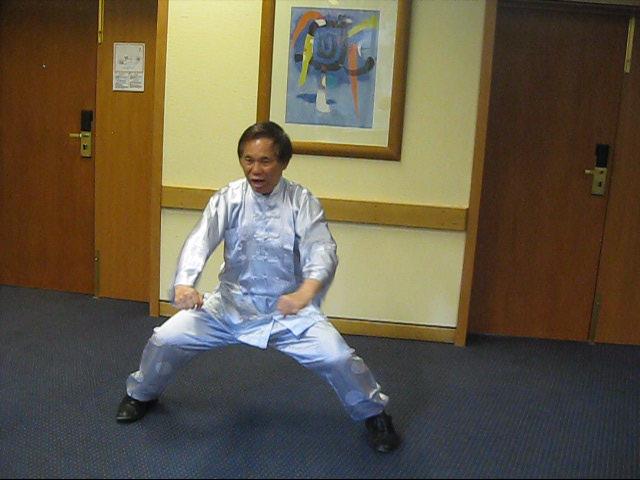 How has practicing Taijiquan improved your Shaolin Kungfu?

The practice of Taijiquan has improved my Shaolin Kungfu tremendously.

My forms were already good, much due to Uncle Righteousness’ correction to have picture-perfect form. But the slow, graceful movements of Taijiquan helped many students to correct their kungfu forms. Hence I asked students to perform their forms slowly and gracefully as if in Taijiquan, so that they can correct their forms. This helps much in both the flow method, which is form → flow → force, and the force method, which is form → force → flow.

Waist rotation minimizes an opponent’s force. I believe but I cannot remember clearly that when I learned Wing Choon Kungfu from Sifu Choe Hoong Choy, my waist was quite rigid, much influenced by my Shaolin Kungfu. Wing Choon Kungfu is well-known for a smaller and weaker exponent against a bigger and stronger opponent, or using minimum force against maximum strength. Hence, now I perform Wing Choon Kungfu using my waist instead of using my hands. The Taijiquan waist rotation also greatly helped my other styles of kungfu.

Taijiquan waist rotation with the memorable statement of starting with the back leg, rotating the waist, and ending in the hands helped in fa-jing or exploding force. About 2000 I discovered that this waist rotation helped internal force to flow from the dan tian, or abdominal energy field, manifesting the kungfu principle that internal force comes from the dan tian.

Why do we spend only 10 minutes practicing chi kung but 1 hour practicing kungfu?

I am sure Tim knows the answer. He is asking the question on behalf of others in the UK Summer Camp.

I have often mentioned that force training in kungfu, irrespective of its style, is more powerful than force training in chi kung, irrespective of its types. It is worthwhile to note that internal force is also found in chi kung, but not in gentle physical exercise using chi kung forms, and the kungfu practiced in Shaolin Wahnam is also chi kung, which is energy exercise. But we use the terms “chi kung” and “kungfu” as they are conventionally used by the public.

There are various ways to classify the different types of force training. For convenient we may classify force training into “flowing force” and “consolidated force”.

When we say force training in kungfu, we usually mean “consolidated force”, like Iron Palm, Iron Arm and Cosmos Palm. There may be the other type of force training, i.e. flowing force, like One-Finger Shooting Zen in Shaolin Kungfu or Lifting Water in Taijiquan. But we do not train One-Finger Shooting Zen or Lifting Water for an hour; we may train for about 5 minutes.

In kungfu training, we do not just train force, whether it is flowing force or consolidated force. We do other things like set practice or combat sequences. When we practice a kungfu set or a combat sequence, we also train flowing force. But the flowing force developed at first by beginning students is not much; they are engaged in getting the routine or the form right. By the time they have become intermediate or advanced, they have developed their physical body to accept the force.

When we practice chi kung we also develop force, especially flowing force. Sometimes when students take courses like “Developing Internal Force”, which can be used in daily lives, they may also develop consolidated force. When they develop consolidated force it is usually not as powerful as that developed in kungfu. For example, in Horse-Riding Stance which is practiced in courses like “Developing Internal Force”, the stance is usually higher which is less demanding and produces less force.

We spend only 10 minutes practicing chi kung but one hour practicing kungfu though the force training in kungfu is usually more powerful than that in chi kung because the nature of practice is quite different. In kungfu there is more movement where flowing force spreads the force over the whole body, like in set practice and sequence practice, whereas in chi kung it is more stationery and the force is more consolidated. 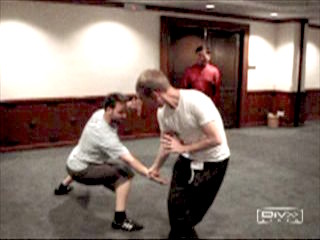 Generally, in our case it is the skills that make a difference between high-level chi kung and low-level chi kung. For example, a beginner and a master may perform a same exercise, like Lifting the Sky. But the chi kung practiced by the master is high-level, whereas that of the beginner is low-level.

When we say that all other things were equal, which is important for comparison, one thing is not equal, and in this case what is not equal is skills and techniques.

If the skill level was the same, techniques make a difference between high-level and low-level chi kung. For example, if you perform Lifting the Sky you will derive less energy from performing Flicking Fingers of Sinew Metamorphosis.

Usually other practitioners do not differentiate between techniques and skills. They believe, wrongly to us, that if they know the techniques they will eventually attain the results of the arts they practice.

Is the Monkey Play similar to Monkey Kungfu?

No, they are different.

The Monkey Play belongs to the Five-Animal Play of Hua Tuo who lived in the 2nd century and worshipped as the God of Chinese medicine. The other plays are the Bird Play, the Deer Play, the Tiger Play and the Bear Play.

Monkey Kungfu is a style of kungfu. There are other styles of kungfu, like Praying Mantis Kungfu, Eagle Claw Kungfu, Tiger Kungfu, White Crane Kungfu, Taijiquan and Baguazhang.

Nevertheless, irrespective of whether it is Monkey Play or Monkey Kungfu, its chief characteristic is playfulness. Monkey Play is good for overcoming negative emotions, like anxiety, whereas Monkey Kungfu is good for stealing peaches, which means the external sex organ. 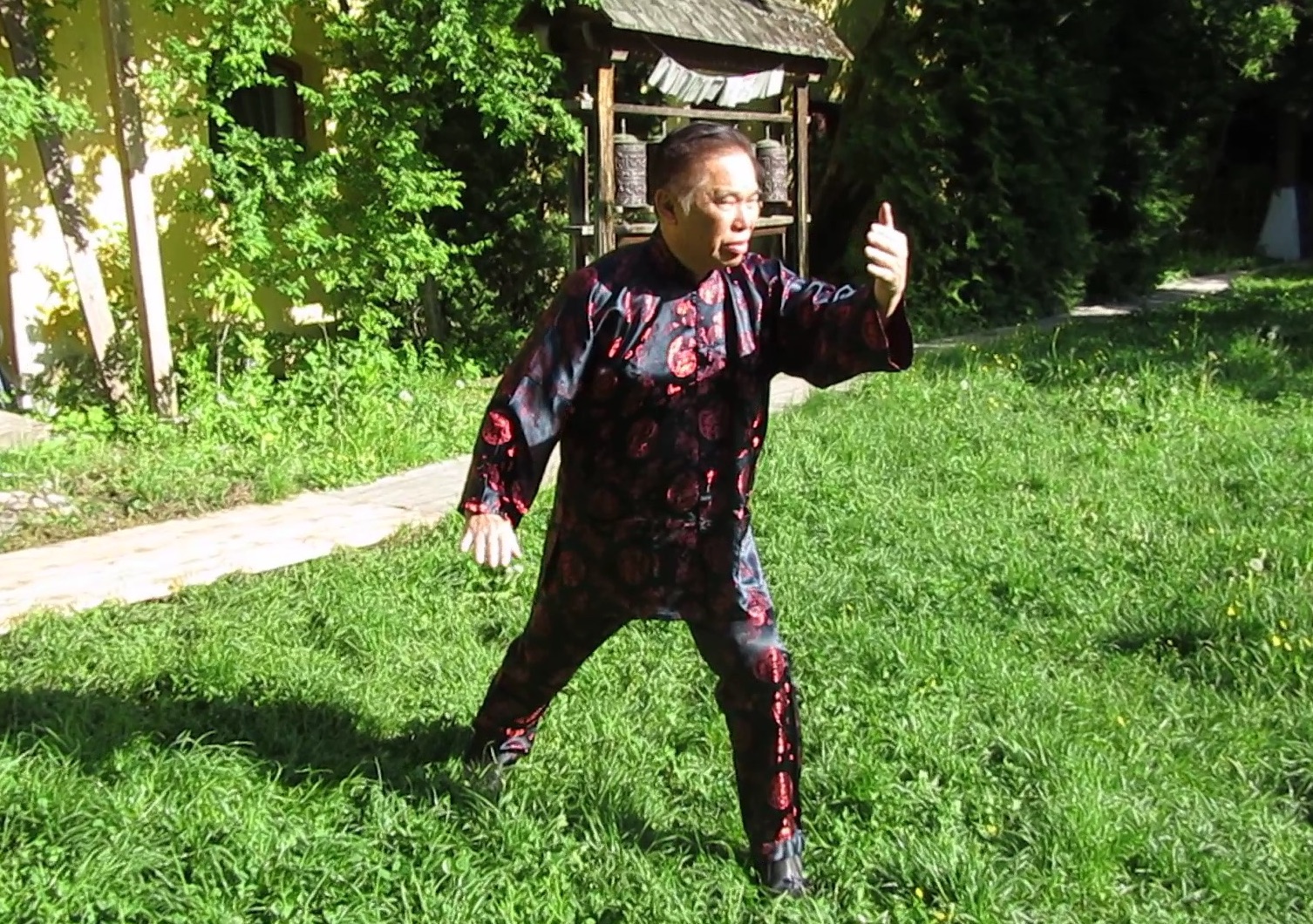 Why there are no longer famous kungfu masters like in the past?

There are a few reasons.

A very important reason is that time has changed. In the past when the fist rather than law ruled society, learning kungfu was a need. Now when people have become law-abiding, learning kungfu is a hobby.

We are indeed very lucky that people now are law-abiding. But learning kungfu has many other advantages. Besides giving us confidence and combat efficiency, kungfu training gives us health, vitality and longevity. We must, of course, practice kungfu correctly. If we abuse it, practicing kungfu can be detrimental.

Connected with changing times, another important reason is that learning kungfu is relatively easy nowadays. In the past it needed much effort to learn kungfu. Many people now learn the external form of kungfu, or kungfu gymnastics, and then teach others. It was a great honour to be a kungfu master in the past, but now anyone who knows some external kungfu form can call himself a master.

Because of the reasons above, kungfu is now grossly debased. Kungfu is an art of attack and defence, but today there is no defence in kungfu. Practitioners hit each other often, without regard of their own safety. These three reasons -- changing time, easy to learn kungfu now, lack of genuine masters -- are mainly responsible why today there are no great kungfu masters like in the past.

Is there a difference between holding the palms at a different angle of the hands when performing “Cosmos First Emerges” in Abridged San Feng Set? In other words, does it matter if the palms are slanted at 75% or at 90%?

Yes, it makes a difference. When performing “Cosmos First Emerges” in Wudang Kungfu, which is the same as “Flying Slantingly” in Taijiquan today, the angle of the hands makes some difference. If the hands are at a bigger angle, i.e. if the palms are more in line with the arms, there is greater chi flow; if the angle is smaller, i.e. if the palms are more bent in, the chi is “locked” or focused at the arms.

In “Lifting the Sky”, for example, initially the palms are bent at right angles to the arms. Chi is “locked” in the arms creating some internal force. Some beginning students mistake it as tension. Later when the arms are lowered, the palms are in line with the arms, letting chi to flow. 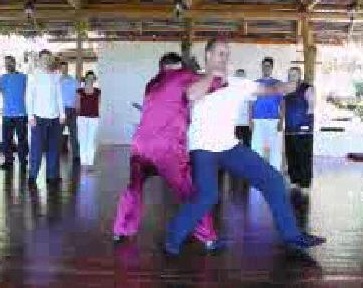 There are differences between kungfu throws and judo throws

Are there differences between throws in kungfu and in Judo?

Yes, there are differences. Before throwing an opponent, the kungfu exponent must cover the opponent so that the latter cannot strike the exponent. As Judo is a sport, this is not done. In a real fight, if the opponent is not covered, he can gore out the eyes or smash the groin of the exponent.

At the completion of the throw, the kungfu exponent must also cover the opponent and deliver the coup de grace. Otherwise the opponent can jump up and fight the exponent again.

Can you please tell us more about the four types of attack in kungfu?

The four types of attack are striking, kicking, felling and gripping.

One normally strikes with the hands, but he can also strike with his elbows, head and shoulder. Kicking is usually done with the feet, but can also include the knees. Felling includes and surpasses throws.

One may fell an opponent without throwing him, like using his knee or trapping him to fell. Gripping is not just locking. If you lock an opponent, you yourself is also immobilized. When you release the lock, your opponent is free and can fight you again. Gripping, called “qin-na” in Chinese, includes holding. It is combat ending as the grip may tear the opponent’s tendons, dislocate his joint or stop his energy flow.

Many martial arts, which are actually sports, are limited. For example, if you kick a Boxer, catch the leg of a Taekwondo practitioner, or grip a Karateka, there are no techniques in their repertoire to counter you. Hence practitioners of these martial arts have to cross-train to meet practitioners of other styles.

It is not necessary to cross-train in kungfu. However, many kungfu practitioners do not know how to use their kungfu techniques in defence; they have to borrow techniques from other martial arts.