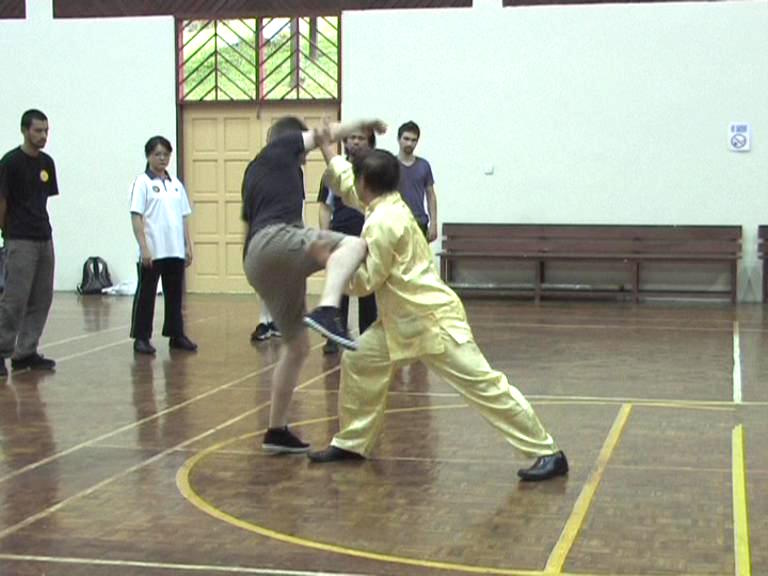 The Muay Thai clinch is often used at bridging range in sports fighting.

What are the advantages of Asking Bridge techniques and skills vs the Muay Thai clinch in a no rules street fight?

What are the advantages of Asking Bridge techniques and skills vs the Muay Thai clinch in a safety rules tournament format?

This does not mean that Muay Thai is not formidable. It is. And Muay Thai kicks are powerful and fast. Most untrained persons would have their bones fractured from just one powerful Muay Thai kick. But these are different issues.

The issue here is that it is not difficult to poke your fingers into his eyes, or tear off his testicles or throat when he is preoccupied with clinching onto you. But even in a no-rules street fight, you and all others of our Shaolin Wahnam family members would not want to do that.

There are many counters against a clinch. The best counter which I learned from my sifu, Sifu Ho Fatt Nam, who himself was a professional Muay Thai champion, is applying the pattern “Plant Willows in Front of Camp”. In one smooth movement, you remove his clinch, deflect his knee jab, and smash his head onto the ground, or in a more merciful way throw him onto the floor.

Other good counters when an opponent clinches onto you are “Fell Tree with Roots”, “Dark Dragon Draws Water” and “Fierce Tiger Descends Mountain”.

In “Fell Tree with Roots”, you use one arm to deflect his two arms if he clinches onto you on one side of your shoulders, move your front leg behind one or both of his legs, press one hand behind his back to prevent him from moving back, and fell him onto the ground with a rotation of your waist. Prevent the back of his head from hitting the floor hard if you do not want to kill him.

If he clinches onto both sides of your shoulders, use one hand to grip his one hand, use your other hand to thread from inside upward to release his hold, and then you grip him at his shoulder joint, and fell him onto the ground using “Fell Tree with Roots”.

In “Dark Dragon Draws Water”, release his clinch like above according to whether he clinches onto one or both sides of your shoulders. Move to his side or back while holding his elbow to prevent him from moving away, and strike his kidney, which may kill him as kidneys are death spots. If you do not want to kill him, strike any other part of his exposed back or side.

In “Fierce Tiger Descends Mountain”, release his clinch like above according to whether he clinches onto one or both sides of your shoulder, move your front leg in between his two legs, stretch a tiger-claw onto his face with your fingers at his eyes, and tear off his skin from his skull. If you want to be merciful, place your fingers just above or below his eyes, and press him down onto the ground.

If an opponent has gripped deep into your neck, which is not allowed in sports, removing his clinch using the above techniques is not suitable. A good counter in this case is “Scholar Presents Greeting”.

Press your forearm hard against his wrists onto your chest, and bend slantingly forward. This will cause much pain at his wrists, making him go on his knees. Other people may think he begs you for mercy. You can use your other hand to drink tea, or continue with whatever attack you like.

Hence, when an opponent clinches onto you, he is offering you an opportunity to defeat him – drastically or mercifully.

Using the clinch as a bridging range is unwise in Muay Thai or any fighting art. Even when an exponent does not know the techniques described above, he can strike the opponent’s vital spots, like his eyes, throat or groin. The clinch is used in sports protected by safety rules.

But not many people may know how to exploit the free offer from their opponents. Even if they know, like some of our students, they may be too anxious or nervous to apply the appropriate counter. A good strategy, therefore, is to go to your the dan tian and lower your stance. A clinch is a relatively harmless hold. You have time to relax and stabilize yourself.

Using the clinch to bridge range is very different from Asking Bridge. When you are skillful in Asking Bridge, your opponent has no chance to apply a clinch on you. As soon as he attempts to clinch onto you, you can sense his movement, and sometimes even his intention, and respond correctly and spontaneously, like deflecting his attack or exploiting it to defeat him. Or you may let him clinch onto you first, then exploit his free offer.

Your question is a good opportunity for me to let Shaolin Wahnam students know that we are trained in such a way that it does not matter whether the combat is a no-rules street fight or a safety-rules tournament, against Muay Thai fighters or opponents of any styles or who are untrained in any art at all.

You just train yourself to fight well. If, for some reasons, you have to fight using Muay Thai rules, you just fight using Muay Thai rules. If you have to put on gloves, you fight with gloves on. Our training is so extensive and deep that even with these handicaps, we have more skills and techniques as well as strategies and tactics than our opponents trained in a restricted art or sport.

If, according to Muay Thai rules we are not allowed to throw an opponent onto the ground, then we would not use “Fell Tree with Roots” but use “Dark Dragon Draws Water”. If, according to Boxing rules, we are not permitted to strike an opponent’s back using an open palm in “Dark Dragon Draws Water”, we shall strike his chest with gloves on. Or we can use “Fierce Tiger Descends Mountain”, instead of tearing his skin from his skull, we can strike his face with gloves on.

The Asking Bridge course will enhance our skills, including our stance and sensitivity, so that we can apply any suitable techniques against any opponents. 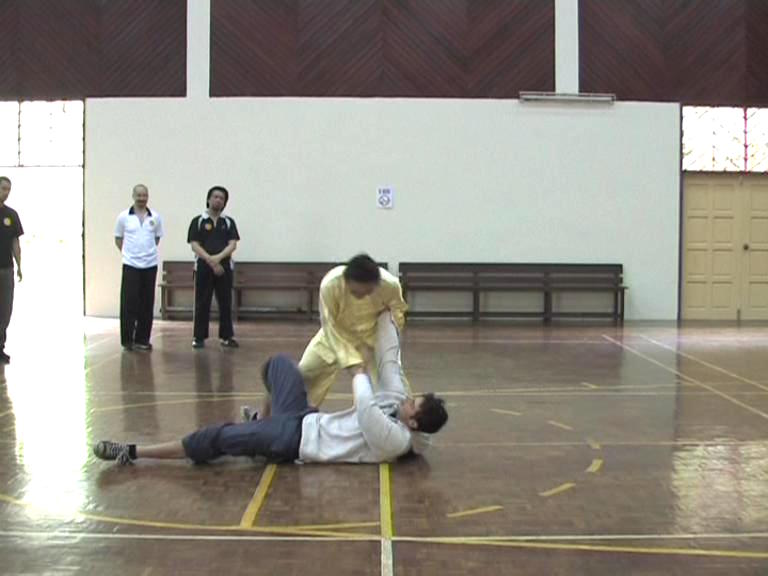 In Shaolin Kungfu, size is not a decisive factor. Although his opponent is tall, Grandmaster Wong fells him easily using the pattern "Fell Tree with Roots"