ADVANTAGES OF CONNECTING BRIDGE AND ADVICE ON HANDLING OTHER MARTIAL ARTISTS 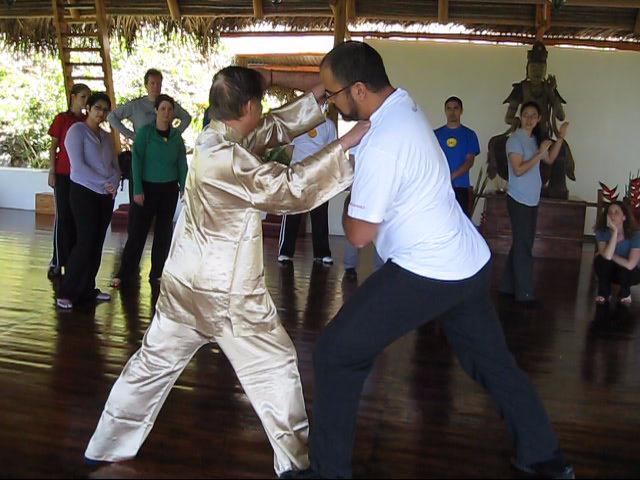 There are many advantages in connecting bridge

What are the advantages and disadvantages of keeping contact with the opponent as opposed to retreating after each attack?

What is your advice on handling opponents of other martial arts who are used to bounce about instead of standing their ground and keeping the bridge?

There are four advantages of keeping contact with an opponent as opposed to retreating after each attack and defence as follows:

When your arms are in contact with an opponent’s, you can defend his attack more effectively. This is possible if you have good sensing skills, sufficient force as well as other skills like good body-movement and footwork.

In both cases, your defence comes from the rotation of your waist, not from moving your arm from your shoulder. Even if you don’t move your arm at all but by rotating your waist, you can deflect his attack. But you move your arm slightly, and your arm movement follows smoothly from your waist rotation, not separately from it.

In practical terms, the difference in time is actually small. What is more important is that by keeping in contact you can sense his movement. When you are advanced, you can even sense his intention.

The same principle applies to the other modes of attack, i.e. kicking, felling and chin-na. In fact, when you are in contact with your opponent, it is easier to detect his kick, felling technique and chin-na than to detect his strike.

Again the same principle applies when you use the other modes of attack, namely kicking, felling and chin-na. Irrespective of what mode of attack, you have to cover your opponent adequately before attacking him, a precaution many people today neglect. If you observe videos of combat even demonstrated by some masters, you can see that an initiated opponent can strike back because the attack has not covered the opponent sufficiently.

Isn’t it a contradiction that when you have an advantage in defence when your arms are in contact with an opponent’s, it is also an advantage when you attack? No, it is not a contradiction because not many people have these skills of connecting bridge. In other words, if you are trained in connecting bridge, and your opponents aren’t, you can defend as well as attack more easily.

Even those who practice the techniques of connecting bridge, like in Pushing Hands, Kneading Hands and Asking Bridge, do so as routine or use muscular strength, and not as a means to train skills or force. From my observation, only those who practice Wing Choon Sticking Hands, train sensitivity. But because they do not have as deep an understanding as we do, they are eager to strike their partner instead of developing skills systematically. They do not normally go beyond this first level. They do not, for example, use tactics, like letting an opponent attack, then intercepting him or countering instantaneously.

The third advantage of connecting bridge is to control an opponent, besides being more effective in both your defence and attack. You may, for example, want to slow down a fast opponent, maneuver him into an unfavorable position, creating an opportunity, or just sensing his force and fluidity.

When your opponent is very fast, trying to match his speed is a big mistake. He is already too fast for you, so trying to keep up with him is merely allowing him his advantage. What should you do? You can slow him down, without him realizing it. Connecting bridge is an effective way to do so.

Another tactic in this category of controlling your opponent is to maneuver him into an unfavorable position. You may, for example, move his arms high while keeping in contact, then suddenly float his arms and attack him below, using the tactic of sound east strike west. Or you may purposely give him a false opening, and when he attacks, you deflect it and counter-attack immediately, using the tactic of defence-cum-counter.

The fourth advantage of connecting bridge is to sense your opponent’s movements and intentions. If you have developed your mind to a high level, you can also sense him without having your arms in contact. But obviously, keeping in contact is easier to sense him correctly. This skill, of course, needs to be developed. If practitioners merely perform connecting bridge as a routine, or are eager to strike their partners, they have little chance to develop this skill.

This sensing skill is useful not just for combat. In everyday life, you can sense you are hostile to you, and you are sympathetic in any situation.

Even amongst kungfu practitioners, not many have a chance to practice connecting bridge. As far as I know, connecting bridge is not practiced in other martial arts. Because of their lack of deeper understanding, some martial artists consider it silly to do so.

Today, irrespective of what martial art they practice, they bounce about and fight like Boxers in combat. As I have mentioned a few times, initially it is easier to fight against them or other people using non-kungfu martial arts or no martial arts at all.

But when you are good at kungfu, you can defeat them fairly easily. It is because the techniques of these martial arts are not as sophisticated as kungfu techniques, so not only they leave a lot of weaknesses we can exploit, but also when we succeed in using kungfu techniques on them they often have no counters in their repertoire. If you fell a Boxer onto the ground or grip the leg of a Taekwondo exponent, for example, they would not know how to defend themselves.

To defeat these other martial artists, you don’t have to use connecting bridge. You just use any combat sequences that are taught in our school.

For many of our students, it is not recommended for them to keep their bridge in contact with their opponents. It is not because connecting bridge is not advantageous, but because they may not have developed the skills to do so competently. They may attend the Asking Bridge course in Frankfurt, but they do not practice sufficiently after the course. Just like other kungfu skills and techniques, or other sophisticated appliances, connecting bridge is advantageous if you are skillful, but will become a hindrance if you are untrained in it.

But our students can still competently handle opponents of other martial arts who are used to bounce about instead of standing their ground and keeping the bridge, if they follow my advice, which is simple and straight-forward. Pracitice any combat sequence well, and use it in combat, including hitting opponents hard. 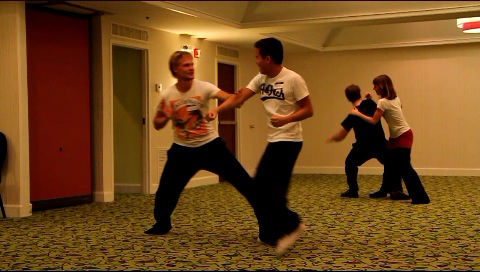 Just apply your combat sequence on other martial artists