IF THERE IS A BRIDGE, GO ALONG THE BRIDGE 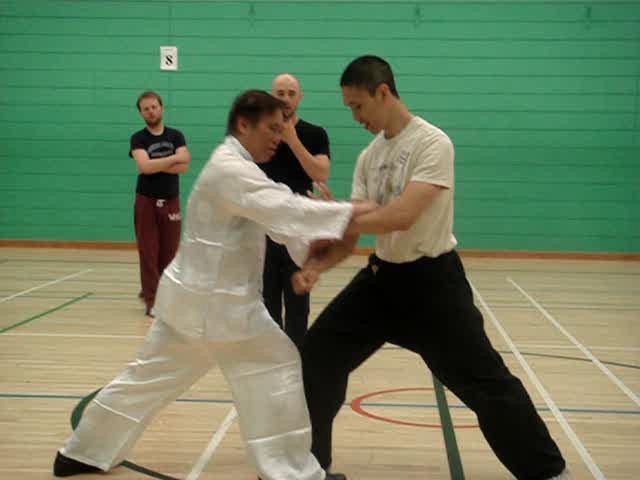 If there is a bridge, go along the bridge

Could you please elaborate on the saying: "If there is a bridge follow (or cross) the bridge, if the is no bridge flow with the water"?

"If there is a bridge follow the bridge, if the is no bridge flow with the water", or “yau kiew kiew seong kor, mo kiew soon shui lau” in Chinese (Cantonese), is a popular principle in Southern Shaolin or Hoong Ka Kungfu.

“Bridge” means “bridge-hand”, or “kiew sau” in Chinese. It refers to the forearm because the forearm is the body part that is usually in contact, or form a bridge, with an opponent.

The principle means that when an opponent attacks you, like using a thrust punch in Black Tiger Steals Heart, you ward off the attack, like with a tiger-claw in Single Tiger Emerges from Cave, press down his forearm, and going along the forearm you strike him, like using the same tiger-claw palm in Black Tiger Charges at Prey.

Some force is needed to press down an opponent’s forearm. In Hoong Ka Kungfu, Asking Bridge is employed to train this type of force.

At first I thought that the second part of the principle, “If there is no bridge, flow with the water”, is meant for sound effect to round up the first part. But later I discovered that there was also meaning in it.

If after warding off the thrust punch of your opponent, he pulls back his arm, which means there is no longer any bridge for you to keep contact, you flow with the water, i.e. you follow his retreating movement to strike him.

This principle is also used for weapons, especially the staff. When an opponent attacks you with his staff, you flick his staff away, and using your staff to cover his, i.e. follow the bridge, you dot a vital point on his forehead using the pattern, Phoenix Dots Head.

If he withdraws his staff after it being flicked away by yours, you shoot out your staff at him using Green Dragon Shoots Pearl. This is in accordance with “flowing with the water”.

There is another similar saying about bridge but replacing “water” with “horse”. The saying is as follows. “If a bridge comes, go along the bridge. If a horse comes, neutralize with a horse”, which is “kiew lei kiew soeng kor, ma lei ma ha siew” in Chinese.

Sometimes, “leg is used instead of “horse” in the saying, as follows. “If a bridge comes, go along the bridge. If a leg comes, neutralize with a leg”.

For example, if an opponent moves one leg in between your two legs, and simultaneously strikes you with his hand, if you ward of his hand attack without moving your stance, you would be placed in an awkward position even if you succeed in warding of his hand attack. If he follows with a second attack, you may be defeated not because you do not know how to defend against his second attack but because you have been placed in an awkward position.

When your hands are engaged and your opponent executes a sweeping kick at you, instead of just neutralizing his kick, you counter-attack. You thrust you foot onto his groin, or to let mercy flow from your hands, you kick his knee with the sole of your foot. Of course, you need good skills to execute these techniques.

“If there is form strike the form, if there is no form chase the shadow”, or “you yeng ta yeng, mo yeng chui ying” in Chinese, is similar to but different from “If there is a bridge, go along the bridge. If there is no bridge, flow with the water”.

Here, when an opponent attacks you, you do not just go along the bridge, you strike it. For example, if a Boxer throws a jab at you, regardless of whether it is real or feint, instead of warding it off, you strike his arm. If an opponent kicks at you, you strike his leg. It is a strike, not a block. Of course, you position yourself in such a way that even if your strike misses its target, you opponent’s attack will not hit you. False-Leg Hand Sweep and Lohan Strikes Drum are simple examples.

In the case of a Boxer’s jabs, because his attacks are high, you use “chopping fist” instead, like Lou Pan Chop Wood in Choy-Li-Fatt, Ascend Mountain Chop Fist in the Eighteen Collection of Praying Mantis, and Second Brother Chop Fist in Tantui.

This strategy of striking form when there is form, chasing shadow when there is no form, is formidable. Many people are quite helpless against this strategy. But like what you learned at the Choy-Li-Fatt course and others learned at the Tantui course, there are subtle counters against it. This reminds us of the inter-creativity and inter-destructivity of the five elemental processes. It makes kungfu interesting. It makes life interesting.

Both sayings, “If there is a bridge, go along the bridge. If there is no bridge, flow with the water” and “If there is form, strike the form. If there is no form, chase the shadow” support each other in practical application in physical combat as well as in daily life.

In physical combat, you want to go along the bridge and counter-strike an opponent with a Single Tiger to his face as he attacks you. But he is fast, he retreats before you can reach his face. Instantly you move forward and change your tiger-claw into a chopping fist onto his head.

When an opponent attacks you with his hands, as there is form, you strike the form with your chopping fist. But he has iron arm. So immediately you go along the bridge of his iron arm, change your chopping fist into a tiger-claw and attack his face.

You chase the shadow. “Then we shall go to have a romantic dinner first. We shall drop in to see the friend after dinner if we have time.”

Isn’t learning kungfu in our school interesting and enriching? Isn’t it a pity that many other people think they learn kungfu by demonstrating forms or exchanging blows? 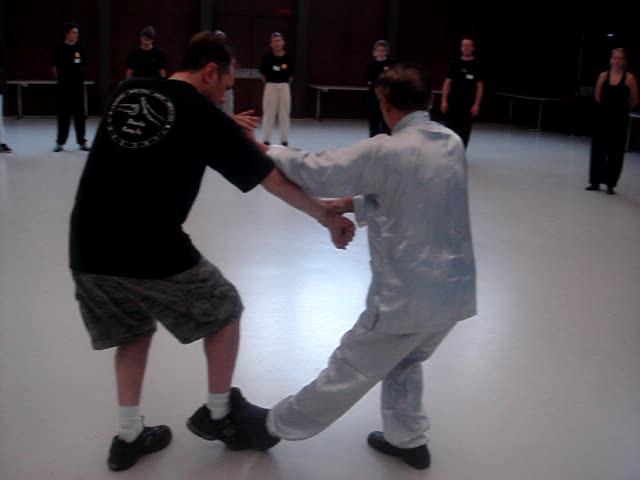 When there is form, strike the form