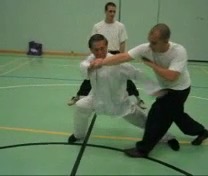 When Sifu Wong visited Sifu Andrew Barnett's kungfu class in Zurich, Switzerland in August 2005, the students took the opportunity to ask Sifu Wong many questions. Ronny asked if Sifu Wong could show him the combat application of the Da Lohan Quan set which he (Ronny) learned at the Shaolin Temple in Henan, China a few years ago.

“Da Lohan Quan” literally means “Big Lohan Fist”, but “Fist” here refers to a kungfu set. “Lohan” is the Chinese word for the Sanskrit “Arahan”. An Arahan or a Lohan was a direct disciple of the Buddha.

The Eighteen-Lohan Fist became the prototype of Shaolin Kungfu. Over the centuries there were many versions of this Lohan Kungfu set taught by different masters during different periods in the long history of the Shaolin Temple. But whatever the version, it was a beautiful set comprising the fundamentals of Shaolin Kungfu.

A shorter vision of the “Eighteen-Lohan Fist” was also practiced, and it was called “Xiao Lohan Quan”, or “Little Lohan Fist” to differentiate from the longer version called “Da Lohan Quan” or “Big Lohan Fist”.

Roland, the assistant instructor of Shaolin Wahnam Switzerland, happened to have a video camera with him then. These video clips were taken impromptu and released here without any editing. Hopefully they may be useful to those practicing this set or modern wushu and wish to know their combat applications. 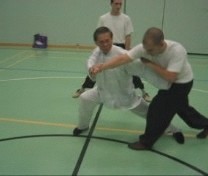 Many students may not realize that bringing the fists to both sides of the waist has martial functions. As explained by Sifu Wong here, every movement in a kungfu set has combat application. Sometimes, one may need to modify some movements, like using the right side instead of the left side as in the set, to suit the combat situation. 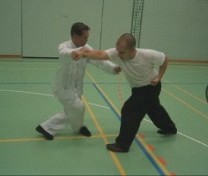 This video clip is a continuation of the previous one where Sifu Wong demonstrates a deadly application of a seemingly innocent move of bringing two hands parallel together. Students practicing this application need to be very careful not to hurt their training partner. Next Sifu Wong shows the tactic of striking an opponent when his attack is just spent, without blocking his attack but by moving away. Then Sifu Wong shows a deadly kicking technique. 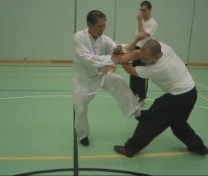 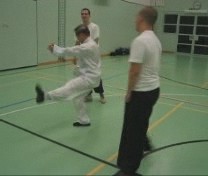 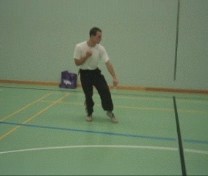 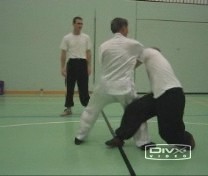 First Sifu Wong demonstrates an elbow strike. Then he shows how he may press in to attack the opponent, causing the opponent to be in such an awkward situation that the on-lookers laugh. Sifu Wong also shows how he can use other patterns from Da Lohan Quan to respond if the opponent counter-attacks. 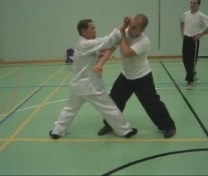 In this video Sifu Wong asks Ronnie to apply what he (Sifu Wong) has just shown him. 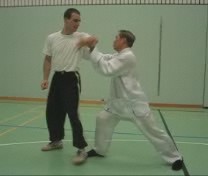 Then Sifu Wong shows how he can use patterns from Da Lohan Quan to counter the pressing attacks.

You may like to view all the videos together. Please click on the picture to view them here, or on the caption to view them at Vimeo.